Who Turned Up The Heat?

The weather guessers said it would be a HOT 79 degrees on the coast yesterday.  I checked my WeatherBug phone app to see what it thought.  The front screen said it was 96.  WHAT??  Am I in the right city?  Yes I was, so I checked the HOURLY feature.  70 degrees with a high of 79, winds 9-10 mph.  I checked the temperature gauge I have up front in the rig and it said 81.  This is crazy!!

My thought was I better go kite flying while it was still rather cool, so I suited up with neck scarf (pull it over your nose to keep sunburn away), my arm sleeves (UV protected) a hat and my iPod.  I was decked out for flying.

Not feeling much wind when I landed in the parking lot, I gathered up my kite stake and bag for the long walk to the beach.  When I got there, I found the weather app had lied.  There was no wind AT ALL.  Basically deserted except for the seagulls, I headed the half mile towards the water.  The tide was out ... but that's a good thing.  You can find cool stuff on the beach when the tide is out.

Okay, that may be true in Hawaii, but it's not true here.  We have found in years past if you follow the seagulls, that's where the sand dollars and crabs are.  All I found was bird poop.  Wearing my waterproof sandals, I walked through the ponds created by the receding tide and out into the little waves.

I didn't go far.  This beach is long and beautiful, making it perfect for rip tides and drowning.  Seriously, this is NOT the beach to let your kids go swimming at.  Even adults have lost their lives here.  Just walk in the freezing three inch water and call it a day.  Which is exactly what I did. 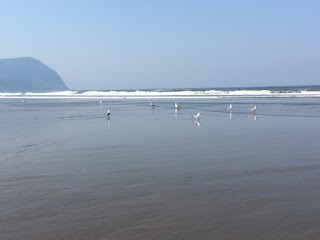 Back at the rig, I lasted about 30 minutes before crawling the walls.  It's hard for me to sit still and watch the same Shark movie for the twelfth time.  Especially with no one to talk to.  By now it was getting REALLY hot outside.  I set the AC and took off in the car towards Cannon Beach.  There were several beach pullouts where I wanted to get photographs.  This one from a viewpoint only wide enough for one car shows the tide all the way in.  The water was beautifully blue and clear as could be. 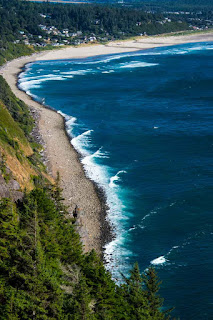 I immediately found that everyone else on the planet had the same idea, as there were no parking spaces to be found at all the little places I stopped.  There are actually quite a few State Parks along the road.  At Arcadia Beach, I finally just sat in my car until someone left.  This beach was packed full of people, even though it looks fairly empty.  They would have much more room if they were in Seaside. 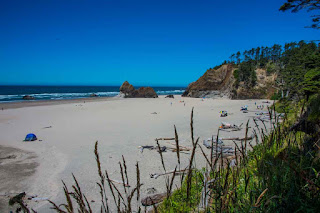 Another viewpoint stop with the sun shining on the water.  You can't really see, but there are beautiful flowers in the foreground.  Are you bored yet?  Yeah, me too!! 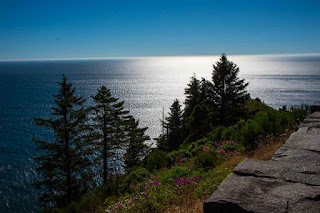 Finally ... THIS guy caught my eye!!  Does this look like the rig of someone we all know and love?  Every time I see something like this, I think of Nick and how many people he has made smile with that picture of his rig.  This isn't all that steep of a driveway, but he's hung up on the rear bumper.  It's been here for awhile and from the looks of it, I doubt anyone is coming back for it.  Maybe they're still living in it!!  You never know around this part of the country. 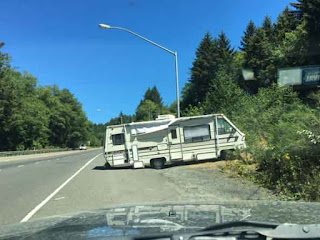 Back at the rig, my euphoria of a 45 minute drive down the beach didn't last long.   Maybe I'll pay bills ... how exciting is that?  Not so much, since my calculator seemed to have died.  A good excuse to brave the heat and go find one in town.  Not an easy task, to be sure.  After the third stop, I picked up this $10 piece of junk. 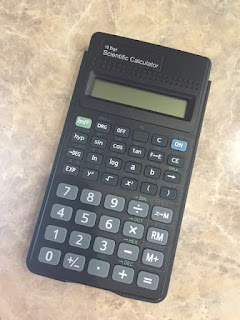 Finally in desperation, I headed off to Bell Buoy for some fresh fish to cook for dinner.  Actually, I was thinking crab until they told me the price was $45.99 FOR ONE POUND.  Scrap that idea.  I see ladies sitting on the bridge with their crab pots ... I'm going to stop and ask how to get my own.  What they DID have was fresh tuna LOINS.  You don't see this very often.  I bought the whole thing for $20.00.

Handle with care, the meat is very tender and will break apart, as it did when I was slicing it up.  Since I didn't have a barbecue with me, I seared it in one of those fancy GREEN pans.  Talk about non-stick ... I LOVE this pan!!  The meat doesn't taste fishy and if I didn't tell you what it was, you would think Halibut.  It's quick to cook ... overcooking makes it dry.  YUM YUM!!  Add to it garlic toast and I had a GREAT meal after an unusually boring day. 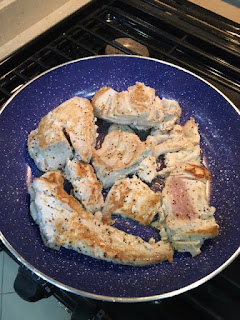 In the end, the temperature got up to 86, or so they say, with an even hotter day expected for today ... into the 90's.  That's funny ... my weather app says 72.  I think I'll go on the hunt for a really lightweight chair to haul to the beach, along with a paperback book to read.  It's going to be another fabulous day at the beach!!

P.S.  Remember the Dirt Devil vacuum?  I've used it three times to clean the entire rig ... all on only one battery charge.  I think it's got one more in it before it requires a charge.  Pretty cool!!