Not the kind of beautiful sirens you hope to see by the sea.  This was the kind that wakes you up at 11:59 and scares you to death.  Not me ... this time anyway ... but it scared my neighbor in Long Beach so much he had already jumped in his truck to hook up his trailer.

He was sure it was a tsunami warning and he was getting out of dodge.  Having heard the same siren the day before, I was pretty sure it was the Volunteer Fire Department call to arms.  To double check, I turned on the scanner on my phone.  If you don't have this app, it can not only be rather entertaining at times, but it can ease your mind ... like it did mine ... that there was a house fire on Willow Street, not a tsunami.  Still, it was a rude way to wake up!!

Back in the fabulous little town of Oysterville, here's a few more scenes you might see if you took a walk around town.  All of these images have been taken from the grass covered side streets. 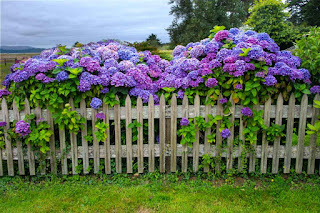 This was right next to the $600,000 house for sale.  You can read the signs in front of the houses which supposedly give you a short history.  One of the locals said those signs may be more fantasy than truth.  It doesn't really matter.  The houses are beautiful! 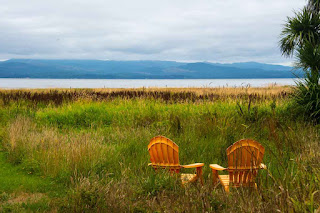 This is the rose bush at the corner of the school yard.  That's the old schoolhouse in the background, which today houses Girl Scout meetings. 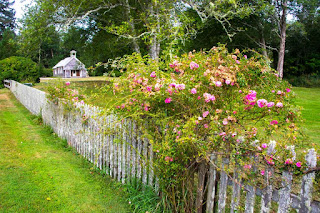 You can probably see why this is perfect bear country.  Lots of dandelions and grass to eat. 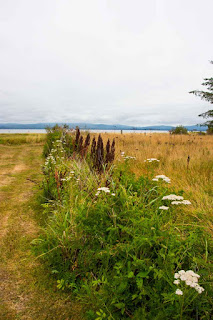 Totally unrelated, I had heard about Waikiki Beach near Ilwaco several times.  In fact, they have music presentations there.  It took me awhile to figure out exactly WHERE it was.  You will need that Discovery Pass, but it's worth the cost.  This beach is inside the State Park and a real gem. 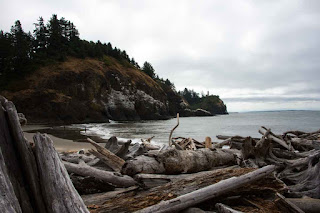 Crashing waves were all around the fishermen ... remember it was Sport Salmon Fishing season.  They didn't catch anything.  If they had continued further out the road, which is actually the North Jetty, they would have been in the middle of the boats frantically trying to catch their limit.  There's lots of parking and great views. 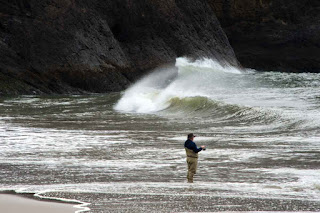 At the furthest natural outcropping is Cape Disappointment.  That's a big ship on the right, passing through the deep channel. 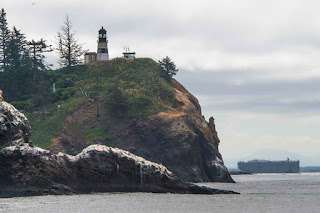 If you spend any time on the Jetty, you will see this going on.  The small boat has just deposited the Bar Pilot on this ship as it came in to the deep channel. 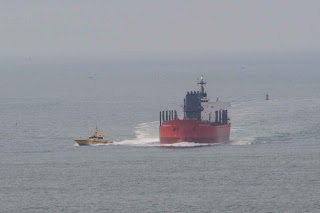 The ship on the right had to stop mid stream and wait for the red one to pass by before heading on his way out to sea.  You can barely see the tiny Bar Pilot Boat heading back to the dock.  Once the Bar Pilot has the shipped anchored out near Astoria, the Pilot Boat returns to pick him up.  Because they know exactly where the sand bars are, the Bar Pilots bring every ship into the river.

I kept my promise ... no kite pictures!!  Temperatures were in the 80's in Tillamook, rather HOT by recent standards,  but later overcast skies kept it bearable.  I spent most of the day doing laundry since I had a sewer connection.

If you're an Elk traveling through this area, you've got double the chance to get a parking space.  That's my rig on the left, parked in the pull through row.  There are now five huge new spaces behind me and ten more soon to be completed.  I have to say AT&T cell and internet service here is getting worse over time however. 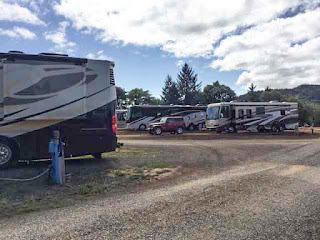 Moving on, I'll be in Newport, then on to Florence where I have an appointment with an ophthalmologist for an eye problem.  I hope it's not bad news, since I'm still waiting on tires.  I really need to get them mounted on the rig and have some repairs done at Elite RV before finally heading home.