The Washington State International Kite Festival has arrived in Long Beach.  It began Monday, but with wanting to get the eclipse images, I didn't step foot on the beach.  I actually did fly my kites later in the evening on Monday since the wind was so good.  A little chilly, I was all alone until the fog rolled in.

Morning and evening fog has made it's presence known every day.  The second day of the kite festival was no exception. 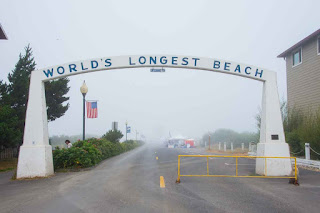 I started out at the end with the World's Longest Beach sign, then began walking towards the kite fields.  Lo and behold ... look what I found.  The images look a little blurry, but that's because the fog was so thick. 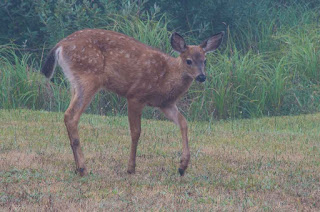 Too bad because this little baby put on a great show when someone walking by (who didn't even see them) got too close.  Mom of course just stood on the sidelines and watched, frozen like a statue. 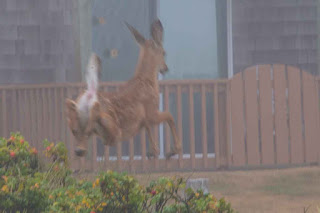 By now I was getting a tad bit cold with only a denim shirt for warmth.  That's when I saw the sign.  BISCUITS & GRAVY!!  It's a staple around here, but last year the vendor didn't show up.  Let me tell you, there's nothing better than hot biscuits and gravy on a cold foggy morning.  I was full to the brim on a half order for $3.00. 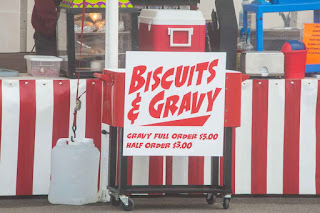 As I got closer to the flying field, it didn't get any better.  The tent on the left is for registration.  If you're a flyer, you get an arm band that allows you on the field.  With band in place, I began to shoot the festivities. 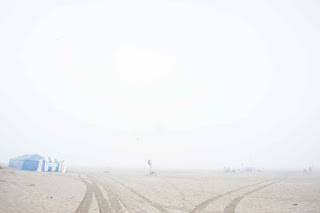 Mornings are never the best for flying since the winds don't usually come up until the sun does.  Still, some of the best flyers are able to do all their stunts.  You can't SEE them, but they're there if you look hard enough. 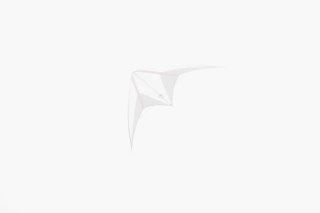 As the morning went on, the handmade patchwork kites tried to get in the air with not much success. Activities go on throughout the day, from a camera class on how to shoot better images of kites to actually making kites, mostly for the kids. 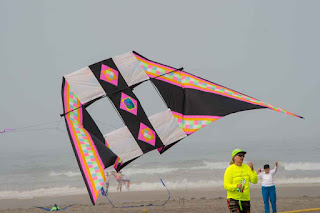 One of the first competitions is Club Camps.  Kite Clubs and individuals from around the U.S. and even overseas, set up their flags around their chairs and vehicles, to be judged for the best display.  One thing I noticed this year, everyone that has a "camp" now has a flag with their names on it ... like Brett and Diane or Alan and whoever, because I didn't get a picture and can't remember her name.  RATS!! 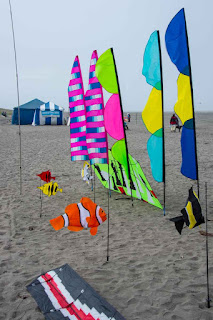 This is Brett and Diane's showing of ducks and flags.  Those small ones on the ground are ducks blowing in the wind.  It doesn't take much to be a flag ... some people had little triangles glued to soda straws that moved in the wind. 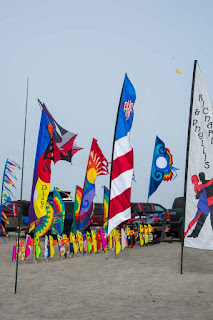 You never know what you'll see here.  As I walked over to the big kite side, this guy was flying his while laying on the ground.  For small ones, people set their own anchors.  For the big sleds (which I'll photograph later in the week) the City actually installs huge anchors in the sand. 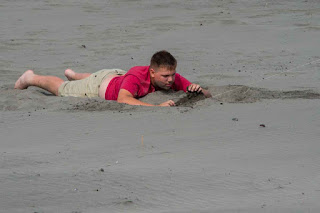 Here is Alan's homemade kite ... one of them anyway.  He thought he would like to make his own, so his wife bought him a sewing machine and he went to work.  It's all appliqué work with designs he drew himself.  About five feet across, it was one of the few in the air ... while it lasted.  Soon all the kites were back on the ground. 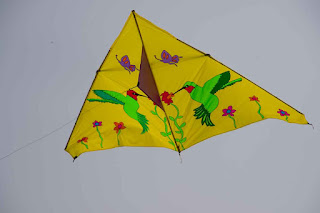 These flew for a short time in the morning.  In spite of all their efforts however, the wind just wouldn't cooperate until after lunch, when I was back at my rig. 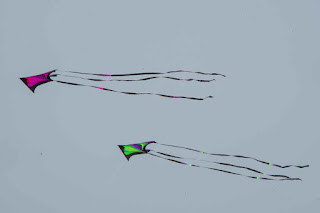 If anything, you can say kite flyers are colorful.  Check out these crazy pants!!  I've never seen so many wild leggings on both men and women.  The more colorful, the better ... including their hair.  Purple, bright blue and pink seemed to be the colors of the day. 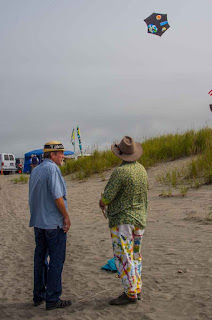 The fog just wasn't giving in, so I headed back to my rig to find another trailer camped next to me with rugs, slides, shoes and dogs all too close and even UNDER my slide-outs.  Really, the sites are plenty large enough to stay in YOUR site and not encroach on mine.  There's nothing more uncomfortable than sitting on my couch and listening to people literally right under my butt!!  They might not like what THEY hear either!!

At around 3:00, in spite of the low winds, I walked the half mile to the beach and flew my EYES kite, made by Bazzer Poulter.  This was apparently the last one available that I snatched from the jaws of another kite flyer with seconds to spare.

It flew beautifully on 120 foot lines.  With a few adjustments, I was able to have a great time with 4 mph winds.  It seems more times than naught, light winds prevail.  It will be nice to STILL be able to fly, novice that I am!!  I mean really, the experts can fly in NO wind!! 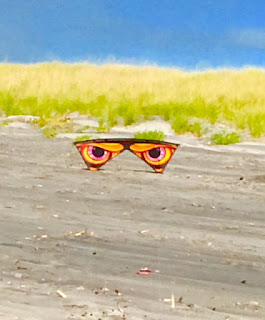 Unfortunately, the breezes are expected to be even less today, meaning the big kites probably won't make it up.  None the less, I'll make a trip to the kite field later just to see.  Cloudy all day today with a chance of rain tomorrow.  I for one don't need an electrical experience flying my kites.  I'll have to find something else to do ... like practice my couch potato stance.