On the hunt for coyotes, I was hoping to miss the bears completely.  Not that I wouldn't want a picture from the safety of my Jeep, but running into one on the trail is not on my bucket list.  When I was a kid, I ran into too many, causing nightmares that continue to this day.

As I drove out to Ledbetter State Park at the tip of the peninsula, I kept an eye out just in case.  Everything looked like a bear.  I was SURE that tree stump was moving, but when I got closer, it was just that ... a tree stump.  All of a sudden the tree down the road DID move.  I grabbed for my camera, but before I could get it up, the stump took one big leap in my direction and disappeared in the bushes.  RATS!!!  This was all I got ... a nice picture of the bushes and the vanishing bear. 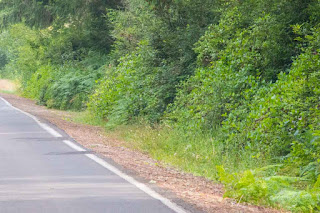 As I got closer, I saw where she ran, down a trail towards the bay.  Mark that one off my list ... I'm NOT going down THAT trail!! 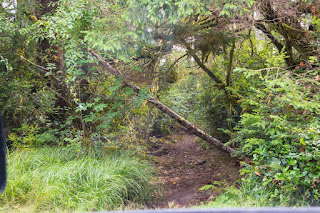 A little further along however, was the trail I needed to take for a geocache at the water's edge.  I contemplated this one long and hard, since the bear was less than a quarter mile away at last sight.  It was a straight shot to the water, but a gauntlet of blood sucking mosquitos!! 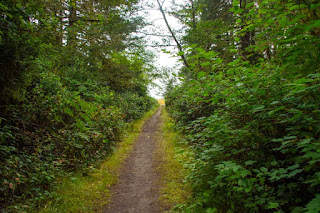 Slapping at my face the entire time (yes I DID use mosquito spray), I ran down the trail until my GPS told me to go left.  I stopped to listen for the bear and realized there were two graves here along with urns.  CRACK ... I heard a big stick break.  To heck with geocaching, I made a really fast run back to the Jeep where I swatted mosquitos inside on the windshield for the next ten minutes.  Good grief!! 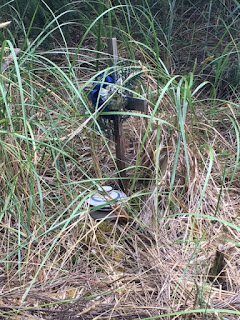 Enough of that ... I drove up the road another mile or so to the parking lot.  Undaunted, I'm SURE I'll find those coyotes today!!  What I immediately found were elk tracks.  BIG elk tracks.  With no sight of him on the beach  (it's the males that are usually solitary, isn't it), I began to stalk the coyotes. 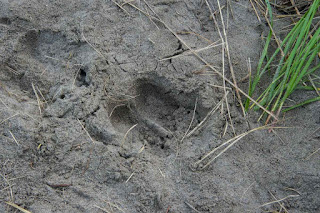 There was nothing ... not even a track in the sand.  Looking out across the bay, I spotted an eagle and took quite a few shots.   Although very far away, all the birds around him were squawking like crazy, so I was sure I had identified it correctly. 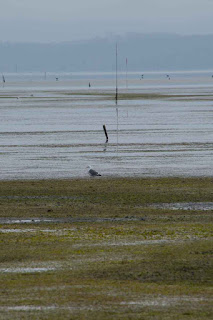 OR NOT!!  When I enlarged it on my camera screen, turns out it was just a seagull.  Well double RATS!!  This isn't turning out to be a good day at all!! 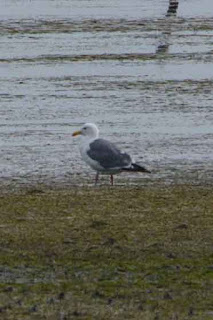 That's when I heard another big CRACK.  Something was moving through the brush and trees behind me.  Here I am with no cover, no bear spray and no biscuits to throw to distract them.  I started backing up towards the trail.  I listened .... nothing.  I silently moved into a pile of dead trees at the edge of the beach and waited.  You're just hearing things Nancy.  I crawled up the bank and looked into the trees to see what I could see. 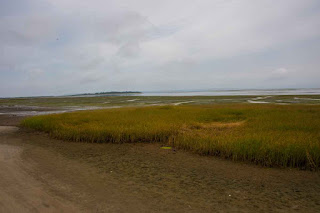 OMG ... I can hear every step as it moves through the brush.  Trying to discern if it was bear or elk, I listened more intently.  That's when it hit me.  IT'S COMING RIGHT AT ME AND IT'S BIG!!!  I retreated back down the bank walked backwards VERY fast to the end of the trail, watching to see if whatever it was came out for a picture.  I hid in these bushes for several minutes, but nothing appeared.  Well that was just a big bust!! 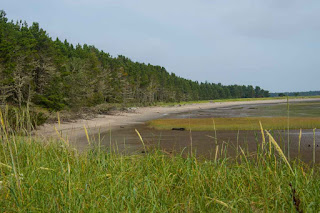 That was it ... I was done.  Single elk are just as dangerous as bears, and being out here all alone is not the safest way to be.  I was hoping someone would show up in the parking lot, but I was completely alone.  The vanishing bear and elk got the best of me.  At least on the road back to town I spotted this little beauty walking the streets so it wasn't all bad!! 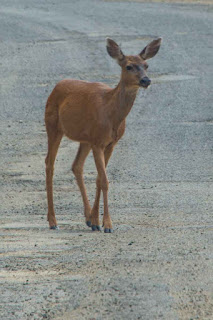 The thing is, I COULD wear a bear bell and make lots of noise along the trail which would probably scare them all away ... but that's why I'm there ... to get pictures!!  At least if there was one other person, we could make enough noise to scare them off ... or maybe I could run faster than them!!

Today will probably be a trip back to Seaside for supplies not available here.  Costco and Fred Meyers aren't too far away.  Maybe I'll do a little geocaching along the way.  Hopefully NOT on trails and in bushes.