I've spent every day helping out in the Operations Tent with a wonderful lady named Cathy from Maryland.  There are so many events going on, it becomes confusing for most everyone.  Cathy is the one in the know!!

While sitting there one day, I mentioned I would love to buy a small kite I can anchor out, but had no idea how to set one up.  The nice kite lady standing there, covered from head to toe with hat, face mask, sweatshirt and coveralls said "meet me on the field at 8:00 and I'll show you".  Just like that!!  Kite people are amazing ... they all want to help YOU get into their passion.

So at 8:00 yesterday morning, I was on the field following Diane Sellinger to her kite anchors.  There's a lot to know.  How big a kite is, how big and strong the line should be, how long the line needs to be and how to hook up to the anchor with carbiners so it doesn't go flying off into Never Never Land.  Don't laugh ... it's happened, causing a few wrecks along the way.  I don't want to be THAT person!! 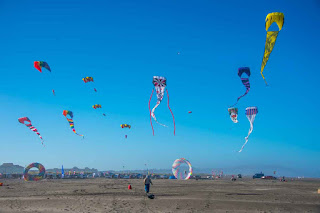 When you see other things hanging on the lines ... that's laundry.  Diane's laundry on this particular kite was a turtle.  Once it was hooked on the line, we set up the big kite, I think officially know as a flow form.  There's lots of different names and I probably got them wrong.  At any rate, as soon as the cells began to fill with air, it went straight up to the sky with the turtle following. 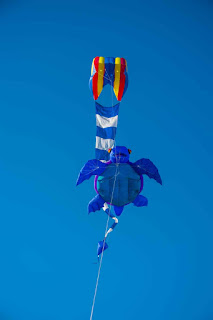 On the way back we checked out these ground kites.  Although a type of bol, they are actually called crowns.  They are pretty dangerous in big winds so you don't want to place these close to people not in the know. 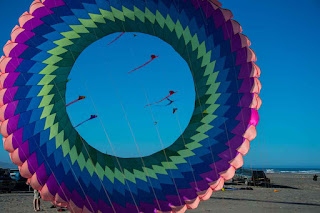 The winds came up hot and heavy in the afternoon, requiring most of the big kites to come down.  They are too expensive to risk damage or loss.  By the way, what's holding them down are big truck tires buried in the sand with a short rope attached. 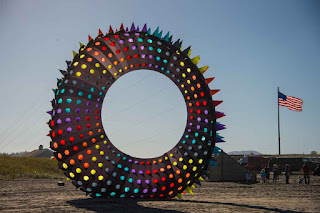 Another of my favorites, the parrot fish was barely above ground in the morning.  By the afternoon, she was flying above the big guys. 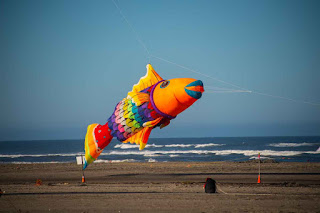 Some kites have long tails like the one above, some have none at all like this stained glass version. 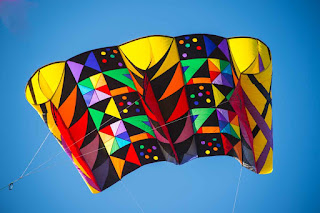 A little difficult to see, this was a beauty.  It has a green undergrowth background with a wolf head and some beautiful flowers.  I rather imagine this one was hand painted. 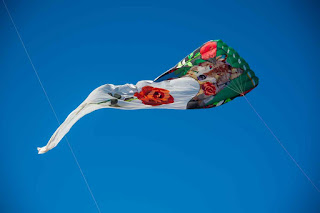 By 2:00 we were all freezing, even with the sun out.  It's a good thing we were under cover of the tent.  Pretty soon the sand started blowing in 20 mph winds.  The Lost and Found table ended up with kite tails, one entire kite, kite bags, a credit card, one shoe and a set of rental car keys.  That last one caused a frantic race to our tent. 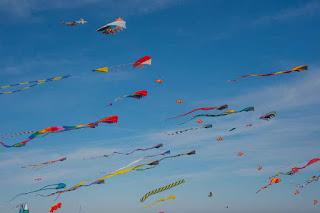 With two more events to go, I called UNCLE and returned to the rig to water the puppies.  Many of the volunteers who flew here have to leave early in the morning, so I'll be manning the tent until noon when the festival is officially over. 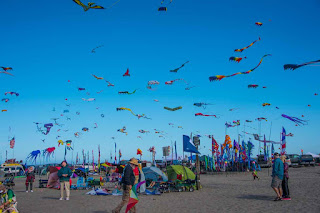 I bet you're thankful the end has come ... no more kite pictures.  But WAIT!!  I've got at least one more day of pictures to show you.  Then we'll finally change the subject to a fabulous sunset I caught in all it's digital glory!!