After close inspection, this was apparently NOT Peter Cottontail.  This spot in Seaside Oregon used to be covered with bunnies.  Cottontails everywhere.  I know, because I put my precious succulents I had been babying, outside to get a little cool breeze.  The next morning, they were gone, as in nibbled off at the roots.

Not having seen any this year at all, I was shocked to find this guy right outside my door ... probably looking for more succulents.  Not really afraid, he let me get very close while he nibbled the flowers. 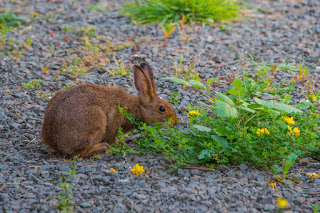 He looks more like a jackrabbit really ... no tail to speak of and VERY long back legs.  That cute little white spot on his forehead makes him readily identifiable.  Alas, I haven't seen hide nor "hare" of him since. 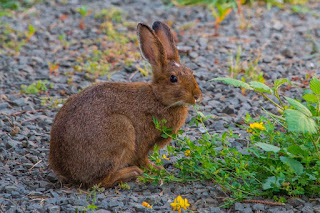 Who was the OTHER Peter?  The Peter Iredale ... a four masted steel barque sailing vessel.  In the time before jetties, she ran ashore trying to find the mouth of the Columbia River in October of 1906. She was abandoned on Clatsop Spit near Fort Stevens where you can visit her remains today. 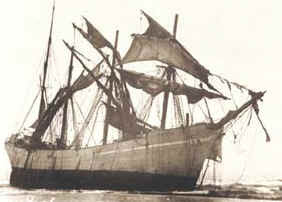 Named for her owner, she was built in England in 1890 of steel plates over an iron frame, the largest ship built by that company.  Bound for Portland Oregon from Mexico, she left with 1,000 tons of ballast and a crew of 27, two of which were stowaways.  With a heavy fog, rising tide and no propeller for power, strong winds drove the ship into the beach.  Everyone on board survived. 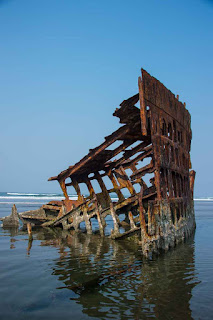 All that remains are the rusted pieces of steel along her length with one end still standing above water.  Plans were made to drag her back to sea, but the weather didn't cooperate and she was soon on her side embedded in the sand.  Though salvage rights were sold, nothing was ever done, and so the bow and ribs lay today, after all these years. 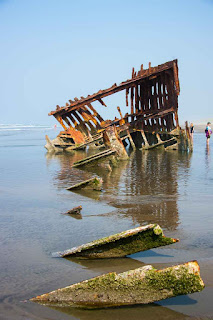 Fort Stevens has signs directing you to the shipwreck, so it's easy to find.  It's another one of those beautiful, long sandy beaches where you can spend the day contemplating sailing the Peter Iredale with only wind and sails.  Definitely go at low tide ... it's SO much more interesting and you can get the feel of just how SMALL she is compared to the ocean she traveled.  Again with the black and white. 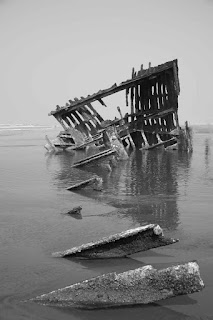 On the way back home, I noticed some huge construction equipment across the road in the Costco Fred Meyer shopping area of Warrenton.  Low and behold, WALMART is coming to this area and it's going to be huge.  Lots more shopping is in the works for Seaside and Astoria.  On the other hand, it's going to do some damage to surrounding businesses.  Hopefully tourists will continue to support the local mom and pop businesses too.

Today I'm off again to the Sunday Market in Astoria before preparing to move yet again.