Sometimes I just luck into things.  Such was the case on Sunday when I found the best breakfast/lunch hideout.  Shhhhhh it's a secret just between you and me!!

While walking around the expensive Cannery Pier Hotel in Astoria, I decided to be bold and just walk in so I could look around.  I like a nice hotel as much as the next person, especially if it's on one of my travel apps that give big discounts.

Surprisingly, they were very nice as I sniffed in the wonderful smell of baking cookies, which they serve for free at breakfast in the lobby alcove.  I admired the architecture out loud, so the ladies offered me a tour of the rooms ... self-guided, along with a walk down the second floor hallway where all the history of Astoria is told on the walls.  Even if you don't stay here, go walk around inside.  It's very understated considering the prices. 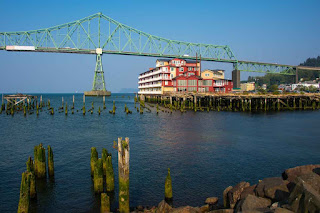 This hotel was built on the 100 year old piers left when the cannery was demolished.  That's saying something for the wood in the old days.  Every room has a fireplace and windows facing the river.  Want to go outside?  They all have balconies. 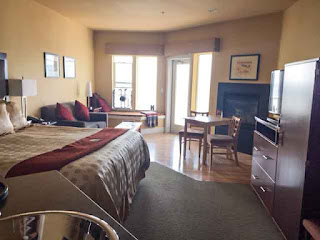 Every room also has a ball and claw tub with weird shutters that open into the bedroom.  I guess you can watch TV while you take a bath.  If this isn't soothing enough for you, you can try the chocolate orange body wrap for $95, or the chocolate ginger wrap, maybe a dead sea mud wrap would suit you better, all at escalating prices.  I'll pass.

As I was getting ready to leave, one of the gals came and got me for their wine tasting.  Are you kidding me?  I'm not a guest, I'm just looking.  Come on down for some smoked salmon appetizers and a full glass of wine.  You're welcome to join in, guest or not.  Now THAT'S hospitality!! 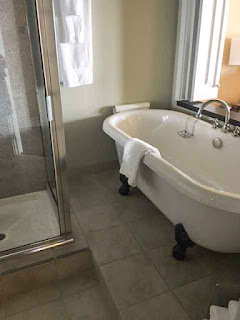 If you're adventurous, they even have bicycles on the deck you can just pick up and go for a ride down the riverwalk.  I chose to drive to this secret hideaway mentioned in a quiet conversation with one of the vendors at the Sunday Market.

I drove all the way through town to 39th Street, where I turned left into a hotel parking lot.  Even though it looks like you're at a dead end, keep going across the trolley tracks and out on to the rickety boardwalk to the 39th Street Pier.  Go early ... like at least by 10:00 as there isn't much in the way of parking.

This looks like you shouldn't be here ... but walk down the long driveway (in the middle of the building) like you owned the place.  At the very end is Coffee Girl.  My new secret hideout. 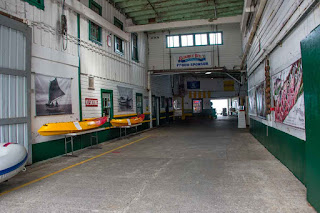 As you walk through the alleyway, this is your view of the river.  Not bad ... not bad at all.  What a great place to have coffee in the morning. 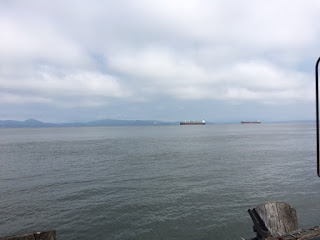 I quickly found out they also serve breakfast and lunch.  I had just eaten breakfast, but really, you can't expect me to report on the food if I don't eat, right?  So I ordered the panini breakfast sandwich, ham and eggs with cheese.  Be patient.  I saw two orders which had to be corrected, and it took about 45 minutes for mine to be served.  Who cares ... it's a beautiful view.  The sandwich was really good, along with fresh blueberries and raspberries. 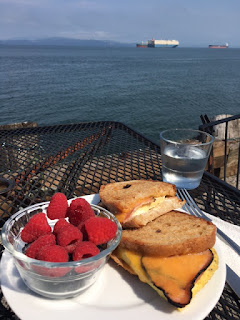 I'm pretty sure the neighbors thought I was crazy when I asked to take a picture of THEIR breakfast ... I can't remember ... Finnish maybe?  It's veggies (mostly carrots) and cream cheese on a bagel.  Whatever floats your boat ... even the smoked salmon bagel looked good.  I heard the coffee is fabulous, but I only drink phony coffee. 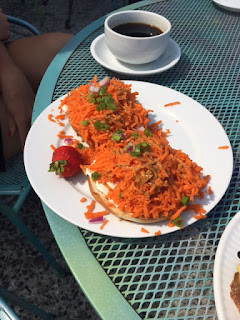 I watched the ships going by while stuffing myself beyond belief.  You have to eat everything on your plate or you sit there until it's gone, was ringing in my brain.  I think my meal was $10 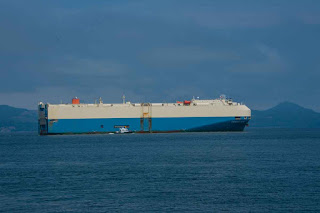 There's another surprise at this location I'll tell you about tomorrow.  Not many people go there, but if you're having breakfast, this will give you a chance to walk it off!!