Being raised on a cattle ranch, there weren't many vacations.  Cattle take a lot of work, not to mention growing hay and keeping the grass green for feed.  To supplement their intake, the cattle were driven to the southern end of Sequoia National Forest to graze the forest service lands during the summer.  That's driven, as in get on your horse and drive them the entire way.

In later years, when the Forest Service cut the contracts, we would still go to the cow camp for vacations, mostly fishing, accompanied by the occasional rattle snake encounter.  Actually MANY rattle snakes, since their den was in a huge rock pile just behind the outhouse.  Running water was the creek down the hill.  I don't remember seeing too many bear, but I got the lecture at least once a day about not wandering off or a bear will eat you.

Our meat was hung high up in a tree or placed in a deep steel-lined pit my dad dug later on.  Canned goods were kept in the one room log cabin.  We didn't SLEEP in the cabin, we slept in sleeping bags on the ground, on a big piece of canvas that wrapped back over the top.  One morning my dad showed me the footprints of the bear that had walked right next to my bed.  You never stepped foot out of camp without a gun.   That began my fear of bears and snakes.  It didn't help that I came six inches from stepping on a five foot rattler one day.

When we did get a vacation, it was always for fishing and always WAY in the back country.  One year we went to Yellowstone National Park.  My parents would drop us kids off (usually a few cousins went with us) one at a time around the huge camping area before deciding on which one to stay in.

As I stood in the site, a big crowd of people came down the road, following a HUGE grizzly.  I crawled up on the picnic table seat.  I'm probably six or seven years old.  THAT'S when I saw she had TWO CUBS with her.  I was almost frozen with fear.  Mama bears eat people when they have cubs.  My first thought was "you people are WAY too close" ... she's going to KILL you!

To my dismay, the three bears came straight for me.  I crawled up to the top of the table.  I should have stayed still, because that baby saw me and ran straight for me.  Next thing I know, he's on top of the table sniffing my arm.  I'm literally paralyzed with fear!!  Mama bear took a couple big loping steps towards me huffing all the way and I knew I was dead!!  Go away ... go AWAY!!!

Just as she got to the table (I could have reached out and touched her), the little bear jumped down and they kept going down the road, right to my cousin Patty's camping site.  While she sat on the table, the bear ravaged the tent next door for a loaf of bread.  About that time, my parents came back to pick us up.  I could hardly get down off the table.

As if that wasn't enough, my dad picked a beautiful campsite, remarking he didn't understand why no one was here ... it was the best one in the park.  We found out why later that night when the bears came down the hill to hunt for food in the campground.  We were camped in their entry and exit point.

All through the night bears would come and go.  I figured it was a pretty dangerous place to be since my dad never put his gun down.  We actually banged pots and pans to scare them off, not that they cared really.  They weren't the least bit afraid of us.  Two nights of that and we left.  The bear nightmares began and have continued all my life.

There have been many more encounters, but that is what started it all.  I have more than a healthy respect for bears, mostly because I've never seen one that ran away from us because they were afraid of humans, even if we were on horseback.

So I'm playing a little catch up here.  Last Sunday I went back to the Astoria Market to get some pictures of the bridge with nice clouds, only to find the construction crew had wrapped the base in white plastic.  That's doesn't make for a very good image. 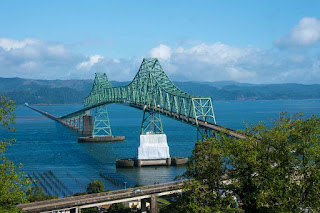 Luckily my favorite jams were back.  Marionberry Jalapeño seems to be everyone's favorite and is hard to get your hands on. 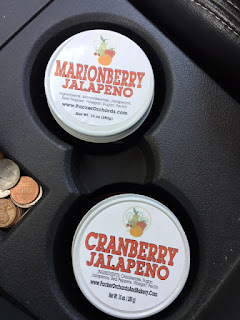 You can get a full meal as you walk up and down the street, including beer and wine.  Romero's Mango Salsa was delicious!! 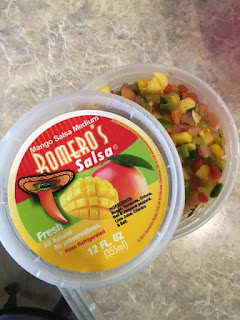 A little geocaching with Matilde the pelican got me nothing.  A big fat ZERO.  The thing is that some people who don't geocache might think it's dumb, taking it and throwing it away if they see you.  It's all about STEALTH.  Don't let anyone know what you are doing.  This one sits in front of a restaurant window, making it impossible for me to find.  With two people, one can distract attention, but with only one, it's pretty obvious I'm looking for something. 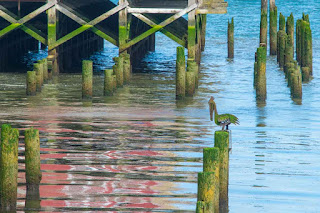 Back at the rig, I made Miss Terry's wonderful pizza.  How did I get the dough so round?  When I was on the trip to Maine with Barbara and Tom Westerfield, we stopped in at an amazing quarry where they get headstone material.  Way back in the corner of the gift shop Tom found core samples. About 8 inches long, an inch around and very heavy, they are perfect for rolling out pizza and pie dough. 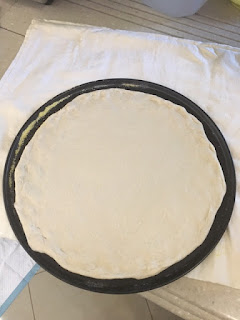 At any rate, I threw this together and baked it in my Breville Oven.  You can't go wrong with this recipe.  I even have enough dough left over for one more.  The longer it sits in the fridge, the better it gets!! 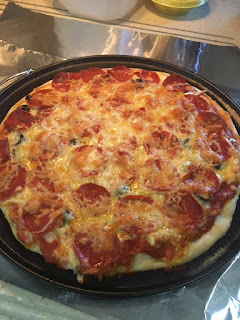 The RV park is full to the brim, packed in like sardines.  My neighbors started a nice big smoky fire that blew right in my open door.  I don't understand why people aren't more aware of their neighbors. I slink around in the early mornings, trying not to make a sound when I take the puppies out, but I guess that's just me.

At any rate, I'm thinking rather than stay in the campground and become grumpy (like it's probably too late now) I thought I might go back to Ledbetter Park and see if I can find that bear!!  NOT!!!!  I would like to get more pictures and pick up that geocache near the mosquito gauntlet.  That's how much I'd rather not be in the campground!!  If you don't hear from me tomorrow, you'll know I found the bear!!