Geocaching is a lot of fun.  A treasure hunt that is almost always a challenge ... find the location, find the cache box and sign the log book.  Then you get to log your find on your phone app, keeping track of how many you have located.  I think I'm up to 123.  Not much compared to many who have 3-4,000!!

The best part of all is you find crazy little hideaways no one knows about.  People walk right by things every day and have no idea.   This mosaic with about ten panels is hidden in a pocket garden in Ilwaco. 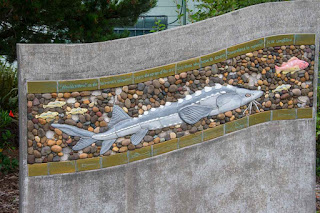 So off I went for a day of treasure hunting.  I'm not so good at this and get frustrated when I can't find things.  Especially when the area is full of "muggles", people who will trash or even take the cache if they see you with something in your hands.  It's sleuthing ten times over.  You have to be nonchalant like a detective, so no one catches on to what you are doing.

It's hard to be nonchalant on the side of a busy highway.  The hint said "sign".  There was no sign ... only this banana slug that I almost stepped on.  Eeewwwwwww!!!   I slogged around in the underbrush, getting stuck with berry vines, only to find nothing.  My iPhone GPS kept saying I was 38 feet away no matter where I went.

Back at the pole where the sign wasn't, I broke a fingernail trying to reach inside where the spiders live.  Okay, I've had enough of this one!!  DNF ... did not find. 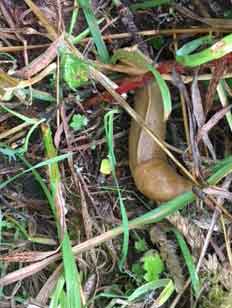 Next up, a little pocket garden in Ilwaco.  I'm relatively sure you've never seen this one.  It's interesting because it's full of labeled native plants of the area ... you know, the things Lewis and Clark saw when they arrived.   I didn't get wet or break anything.  FOUND IT!! 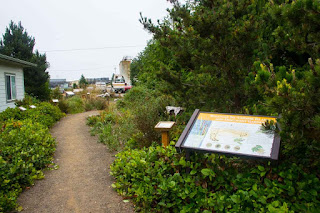 Next up, a short drive to an obscure little boat dock that's completely hidden in Cape Disappointment State Park.  What a beautiful walk along the bank of the bay to a perfect little bench.  It happens that a Ranger and several people came along on a nature walk.  He explained the old piers were from a wharf built out into the bay where big ships brought in all those huge rocks for the Jetty.

Remember several days ago when I showed the old railroad trestles?  This is where it all started.  The rocks were loaded on to trains and transported to the Jetty for placement. 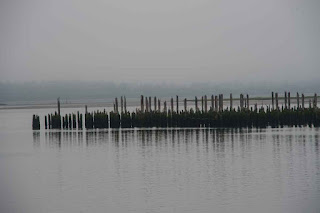 I sat in peace and quiet for a few minutes and watched the fishing boats come and go.  As you can tell, it's still foggy.  Not cold, just foggy and overcast. 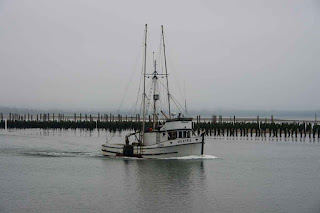 Next up, I headed back to Beard's Hollow to find one I missed last year.  This just looks like bushes, right?  Well if you scramble through the bushes, there is a trail of sorts, completely unseen by almost everyone.  Not terribly far in is what cannot be called a trail, up the side of the mountain where the cache is.

Trouble was, even though I wore my tenny sneaks, it was slippery wet with nothing to hold on to.  That 30 pounds of camera gear on my back didn't help.  When I say steep, I mean if I fall, I'm a goner!!  Half way up it got even worse, the trail so overgrown I wasn't sure where to go.  Coming down would be even worse, so I gave up.  I slid down the hill on my butt ... literally. 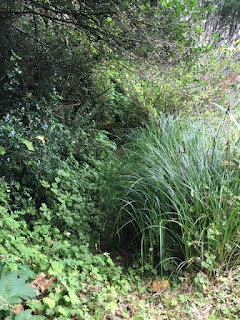 A little further around the hill was this trail.  Yup ... straight up.  Again, with this camera gear and my brain screaming "oh hell no", I figured to go even further around to the caves.  If you can't get to the top, you can find another cache in the caves. 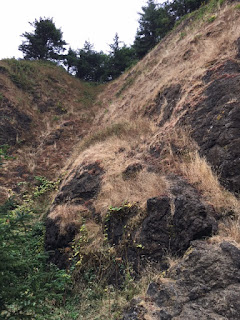 Having been to the caves last year with no flashlight, I had an idea of where they were, so off I trotted, again through the bushes, spitting out mosquitos that flew in my mouth all the way.  All of a sudden I stopped dead in my tracks.

FRESH BEAR POOP!!  OH NO!!  Not just a little, but a LOT, meaning MORE THAN ONE BEAR!!  I looked around quickly, listening for any movement.  Knowing bears only forage at night, I figured they were probably snuggled up in those caves.  Forget THAT!!!   I beat a hasty retreat!! 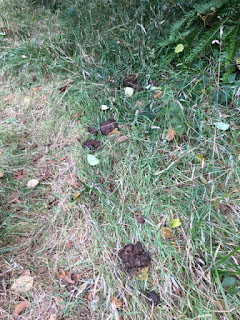 I headed on out to the sandy beach of Beards Hollow instead.  It's a beautiful walk, even better if you have a bicycle to ride the paved path.  The tide was coming in and the waves crashing.  It's amazing how much this area has changed since the jetty was created. 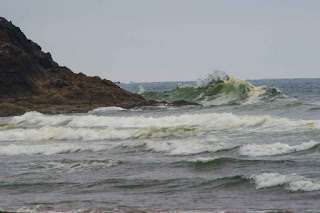 The entire walk from the parking lot used to be ocean.  It has since filled in completely with sand and trees.  The waves were amazing to watch, but I was wet, tired, mosquito bitten and hungry.  Time to head back home. 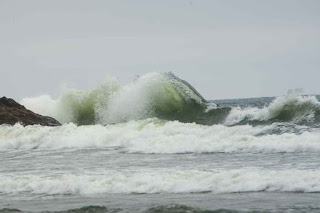 That's when I discovered THIS.  My Jeep is parked just to the right out of the picture.  I just can't describe how angry this makes me.  Some brats did a smash and grab on these two vehicles.  Both cars had lots of stuff inside, making them more vulnerable.  With my phone on it's last tiny bit of battery, I called 911.  The Sheriff arrived in fifteen minutes.

He said this isn't the first time.  They hit just a couple days ago in the North Head parking lot.  He thinks it's local kids on bicycles (quick getaway down the bike path) looking for electronics.  NEVER LEAVE ANYTHING IN YOUR CAR!! 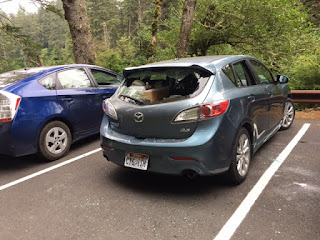 There was nothing in my Jeep in sight ... you can only see through the front windows.  Thank goodness the back windows are tinted so dark they couldn't see my kite bag which would have netted them a few thousand dollars.  Then again, it would have been pretty big and heavy for them to haul on a bicycle.  It now resides on the dash of my rig.

Not a nice end to a day of geocaching.  With even more mosquito bites, scratched legs and a sore broken fingernail, I consoled myself with pepsi and the last of my candy.  The once empty tent camping area is now full of screaming kids and dogs running loose.  It might be a good day to hide away and watch movies.

My last thought was I was really glad I wasn't bear bait!!  There sure seem to be a lot of them around this year!! 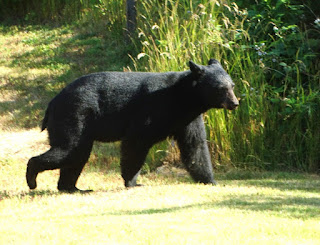 Posted by Nancy Kissack at 7:03 AM