I'm happy to say everyone here survived the eclipse and my handy dandy duck tape, construction paper and wood glue lens worked perfectly.  With all the fog, I was pretty sure it was going to be a miss in this neck of the woods, but about 8:00 I saw the sun try to shine through.

I did my sunshine dance around the rig and what do you know?  It worked.  Here's Miss Jessie all decked out in her sunglasses. 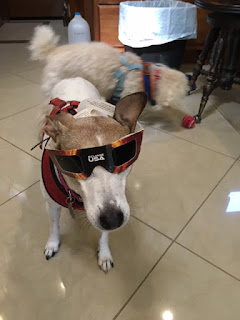 It was weird that you couldn't see the eclipse unless you had the glasses on.  Even when in full eclipse mode ... 97% here ... you STILL couldn't see any dark area.  Although it got quite cold and windy, it never did get night dark like I expected.

What DID happen is that I met a wonderful couple, Mary and Steve Klinger.  They happen to be parked right behind me.  It's funny how you never meet your neighbors in an RV park, but have something like this happen, and everyone comes together, laughs and has fun!

Mary and Steve are from Oklahoma.  We talked all things tornado, corn, ticks and chiggers, along with the best time of year to visit.  They are loving the cool weather here on the coast!

Finally, at about 9:08 am, the first little bite showed up at 1 on a clock.  Although they had made a box viewer, I gave Mary and Steve two of those glasses I purchased.  What a difference they made.  I basically didn't use mine since I could look through the camera lens. 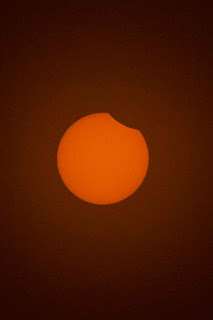 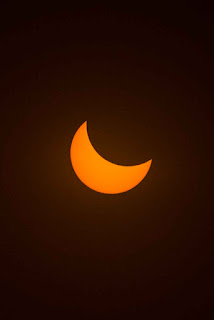 As it got down to the last little area on the bottom left, the half corona began to shift from the left side to the top and on to the right.  We never did get the full corona or the diamond ring appearance.  You had to be a little further south (?) for that. 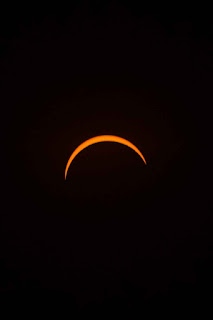 Oh what the heck ... here's the whole thing from start to finish.  I saw images like this previously and had an idea how it might be done.  I was wrong.  It would take hours.  After only TWO hours on the computer, I was able to come up with this picture of the whole eclipse.  the difference in color is due to clouds and fog.  Once it began to appear and heat back up, the fog rolled in like a train, fast and furious!!

What an exciting morning.  It sure brought the RV park together as people gathered around in groups.    Never mind the barking dogs.

My eyes were overtired from looking through the camera lens and then the computer, so I opted to hit the beach.  The wind was up to 18 mph, so I brought out the Shook.  The beach is pretty trashy with sticks and bits of dried grass, but with no one in sight, I didn't let it deter me.  I just stepped over the dead seal carcass.

Hmmm too much wind.  I let the leaders out.  STILL too much wind.  After letting them out as far as I could and flying for about an hour, I gave up.  It was pulling me down the beach, meaning it's stretching the kite and the lines.  Besides, I forgot my music AGAIN!!  As you can see, the fog was really rolling in and I was getting damp around the edges. 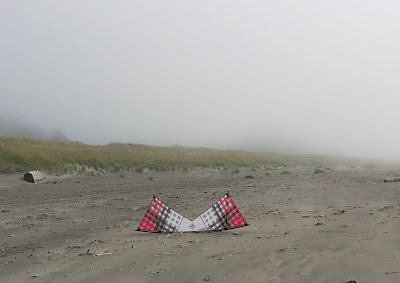 The Kite Festival started yesterday, so I'll head down this morning.  It's time for some pretty kite pictures, although there is no sun forecast for the next two days!!  I never noticed how much the weather can change in one spot.