Rarely do they come into the Columbia River, so I'm told, but this year you could see whale spouts and tail slaps during high tide.  I'm on the move however, so the story will have to wait until I'm settled in.  Wish me luck finding a space at the next Thousand Trails Park!!!

Well I made it, my left eye twitching all the way.  Upon inspection on Saturday, there were only two spaces opening up.  A very nice gentleman helped me park, right under that big tree.  Thank goodness the satellite dish is far enough back, but a trip to the office for a chain saw was required.

No problem .. I don't plan on staying in this spot.  The guy right behind me (with his three huge bouvier dogs) will be leaving Wednesday morning.  I'll be the vulture parked in front of his rig just waiting .....

In the meantime, I stalked the Oregon side of the Columbia River for whales.  Here's the same Cannery Pier Hotel and Spa.  Park near the boat dock and you can walk the entire length of the little jetty and see nothing.  Okay, there is a nice bench at the end where you can contemplate the seagulls and you do get a nice view of the bridge. 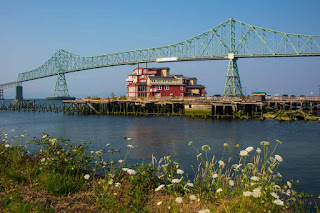 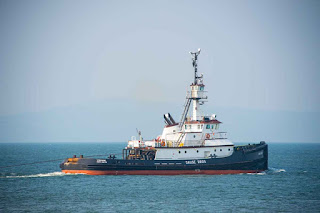 I gather the one in front was just to help steer should it veer off course due to the strong current. 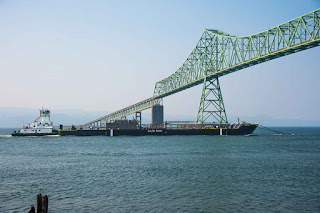 With that being the excitement for the morning, I decided to check out the hotel (another story for another day) where I learned something very interesting.  As you cross the bridge to Washington, look to the left (best seen at low tide) where you will find old pilings sticking out of the water, right in the middle of the river.  Here's why ... there were horse barns built on stilts in the shallowest part of the bay.  That's where these horses and their caretakers lived.

After salmon nets were spread out by boats and when the tide was just right, the horses were brought out and harnessed to the nets.  Called seining, they would pull the nets in where the fish were collected.  When the tide came back in, the horses were walked up the ramp back into the barn.  All this of course, before the bridge was built.

One of the things you look for if whale watching is the number of birds swarming close to the water. They are picking up the krill and fish the whales are missing.  There were lots of pelicans flying around this day on the Washington side, west of the bridge. 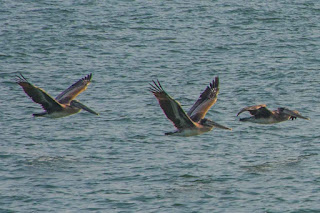 Finally, I caught glimpses of several spouts erupting into the air.  Too bad they were so very far away. 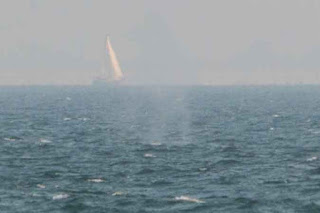 Still, I was able to capture a few pictures.  There were no big breaches here, as the water isn't that deep.  As far out as they were, I'm guessing they were near the edge of the deep water channel. 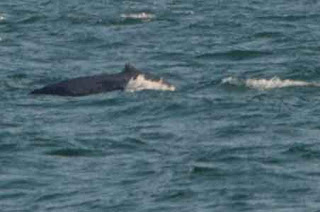 Barely visible in the gray sunless morning, I spotted a few more blows and gulps for air. 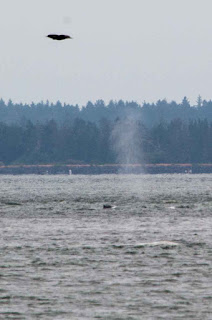 At long last I was able to follow this guy through the waves as he headed back out to the ocean. 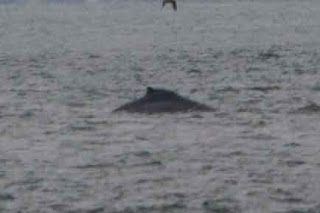 Finally ... a whale tail with a mini slap before disappearing beneath the water.  Soon there were six or seven cars parked on the side of the road next to mine.  Without binoculars or a telephoto lens however, they were very hard to see. 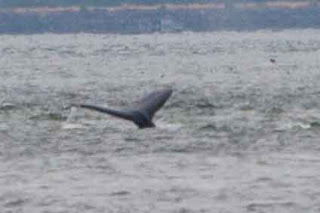 By now my butt isn't happy I've been sitting on this very hard rock for the last hour.  About this time the salmon sport fishermen in their boats came screaming through right and left, with no apparent regard for the whales.  Two killed their engines ... a good thing ... then jumped in to swim with the whales ... a bad thing.  The whales were having none of it and completely disappeared.  After 30 more minutes, so did I. 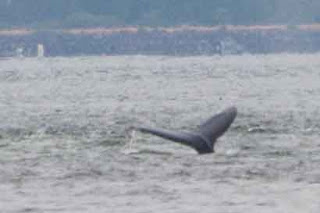 Speaking of salmon, I'm constantly driving by Josephson's Smokehouse.  They specialize in smoked fish.  Although not my favorite, I decided to stop in for a gift pack to send to friends in Florida who couldn't make it to the Pacific Northwest this year (you know who you are).

I tried a taste test of Maple Wine smoked salmon.  WOW!!!  I'll take a pound of THAT one, until I found out how much it cost!!  YIKES!!  It's okay, they're worth it!!  At least I thought so until I found out that shipping it to the East Coast cost twice as much as the salmon.  It has to be shipped with dry ice.  Okay then ... I hope you come back to the West Coast soon so I can buy some smoked salmon for you!!!  I bought this tiny 2" piece for me for $10. 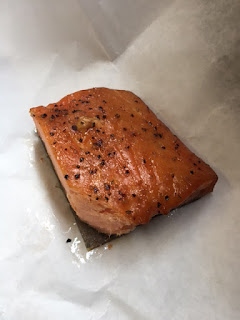 They also serve lunch ... mostly salmon things, but their menu said clam chowder.  It sounded good.  It came in a cup like a Blizzard.  You could turn it upside-down and nothing would come out.  More like hot potato salad, I ate as much as possible before that funny taste got the best of me.  Maybe it was the spices, or maybe it was the tiny clams, or maybe my taste buds were full of salmon. 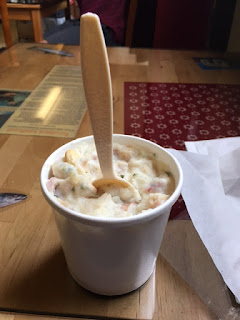 So here I am parked in Seaview Washington for the next three weeks.  Notice the TREE!!  I'm not putting the driver side slide out.  With my luck I'd catch it when I pull the slide in and take half the tree with me.  The guy behind me?  That's where I'll be camped out until he leaves. 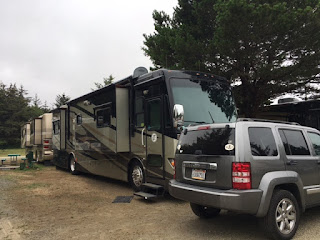 In the meantime, I'm ready for lunch and a quick shopping trip!!!  You knew that wouldn't take long!!