Bear In The Air!!

Okay, I wasn't quite right when I said there was one more day of kites.  Actually, there's TWO.  The most popular activity of the entire week was the Bear Drop on Saturday.  Just bring your kids, 9 years and under, to register for a lottery drawing.  On this day, 17 bears looking for good homes, were dropped from the Ronald McDonald kite.  Least I THINK that was Ronald.  You don't want to get between kids and their bears, so I stayed outside the boundary. 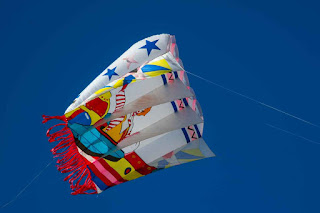 Each bear with a parachute attached went up the line, where on the count of three, they were dropped.  The parachute opened and the lucky kid whose name was called, ran to the landing point. 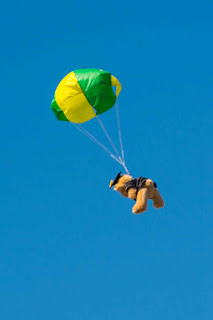 Let me tell you there were some excited kids.  I've never seen so many bear hugs!! 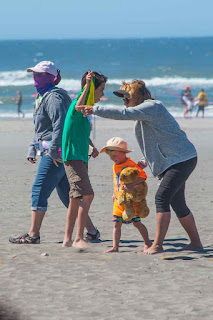 Unfortunately, those whose names were NOT called, weren't too happy.  The Fairy Godmother on call handed out beads and chatchkeys instead. 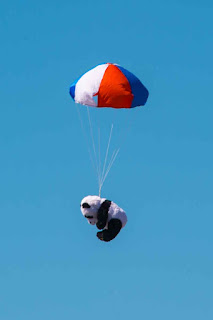 This little boy asked his dad to take him to my tent so he could say thank you in person.  How cool was that??  He was so excited, saying this was the first bear he ever had in his life!!  Makes you want to cry ... really, it was all the sand from the 25 mph winds sandblasting everything on the field, including my legs and feet!! 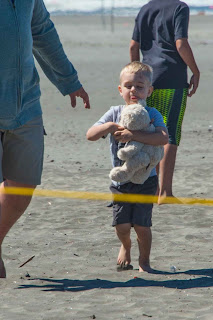 Then there were those who just didn't care.  Don't you wish you didn't mind getting sand in every nook and cranny, not to mention all the dirt??  I'm guessing he was on the ground because the sand was very warm from the sun.  Although he looks like he was crying, he wasn't ... just sifting sand over and over with his fingers. 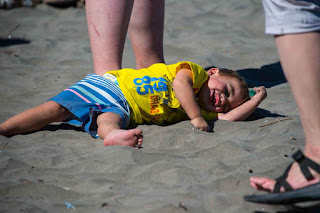 Next up ... the Cody Fly.  These kites were originally designed by Samuel Franklin Cody, not to be confused with Wild Bill.   His fascination with kites evolved into using them to lift heavy weights.  Balloons used for military observation, could NOT be used in strong winds.  Cody kites could.  Eventually, the British Army took interest and they were used during World War I (I think) becoming known as Cody War Kites.  Check out the kite museum for all the info on how these kites were attached to ships. 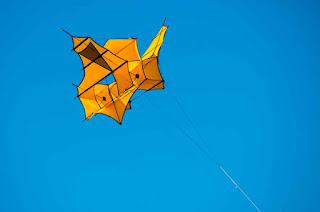 There were a LOT of them at the kite festival.  They had a mass ascension, then posed for a picture.  I don't think any of these were big enough to carry a man aloft.  Some were only six inches long. 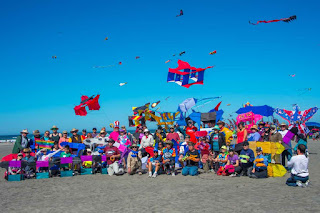 It's always interesting to people watch at the kite festival.  I like to doggy watch.  Wasn't I surprised when I spotted this kangaroo!!  He LOVES to be scratched, and is still a tad young, spending most of his time in the "pouch" hung around this guys neck. 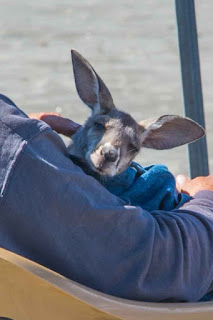 More fish flying around, along with a few bugs here and there.  The variety of kites is amazing. 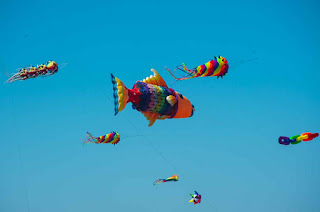 At the end of the day, totally wind burned and beat up, I hit the field to photograph the flag parade.  They were having a pretty hard time holding the flags up in the hurricane like winds.  I love the American Flag made up of flags. 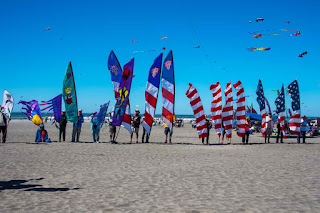 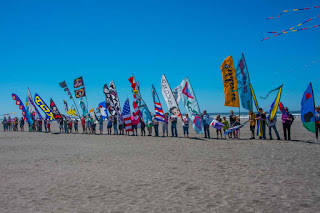 Then there was a mass ascension of soft kites ... those with no spars or rods.  The field was jam packed making for tangled lines here and there. 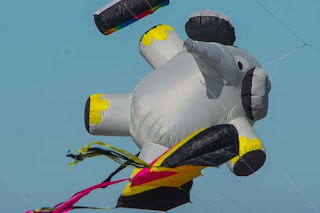 This tiger is a BIG kite.  Probably bigger than my RV.  There's just no end to the shapes and sizes!! 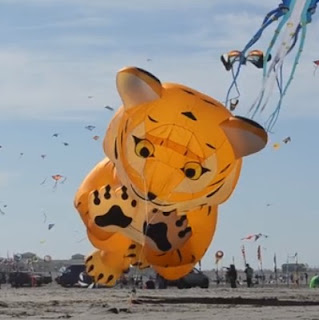 Sunday was a half day.  It's a good thing, because I don't think I could take another day of big wind.  Well ..... yes I could, because it was just as windy on Sunday for the Memorial Fly as it was on Saturday ... maybe even worse!!  But that's tomorrow's story!!