Where Have You Been All My Life??

My family originally came from the Isle of Man, a small island in the Irish Sea between England and Ireland, making me a Manxman.   There's a new show coming up on television about someone who found out they were related to the last King of the island.  Hmmmm maybe I'm related too!!   I think my Grandfather had eleven siblings on the island.  Who knows, but I'll be watching, just in case.

Anyway, there was always a pot of nasty black tea on the table for my grandfather (who lived with us) that no one else drank.  I just couldn't get past the terrible taste.  For some reason, our family missed the scones.  Meat and potatoes made it, as did porridge, but these tasty delights never made their way down through the generations to our table.  That's a shame because they are WONDERFUL!!  Another success in the Nancy kitchen, can you believe it? 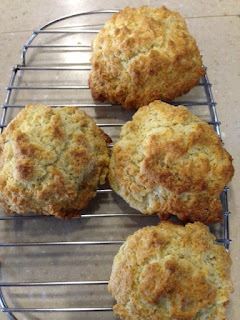 I've had lots of scones from places like Starbucks, but for the most part, they are dry, hard triangles without much taste.  Maybe that's for dunking in your coffee.  When I had some nice tender ones at La Tea Da in Tillamook, I decided to find a recipe to replicate them.  They look kind of like biscuits, but believe me, they don't taste like it.  Sweet with sugar and cream, smothered in jam, I ate two!!  Where have you been all my life??  This recipe is a keeper for sure! 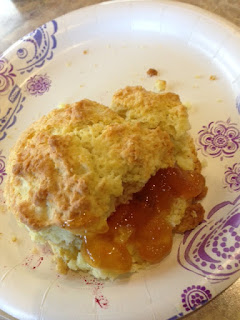 With all the rain hitting my rig, I hoped it would wash itself, but alas, the bottom of my motorhome was mud splashed from the torrents.  Even though it was still raining slightly, I drug out my cleaning tools and went to work.  It looked MUCH better, except for when the water came off the slide topper and ruined all my hard work on one side.  That section had to be redone.

With everything around here closed and more rain coming over the mountains, I stayed inside and worked on my weaving.  I'm getting antsy since I have two new projects in my head and this one not even a quarter finished.  Occasionally I lose my place in the pattern because I'm either kicking the ball for Cooper or recovering it from under the treadles, but for the most part, it went well. 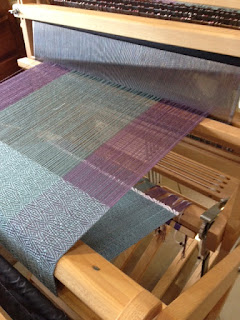 I guess you can figure out what I had for dinner ... the last of the lasagne, followed by one of those amazing Tillabars.  Say aaaaaah is right ... these ice cream bars sure hit the spot!!  At around $1.25 each, I'm savoring every one.  At that price I won't be leaving with a freezer full after all!! 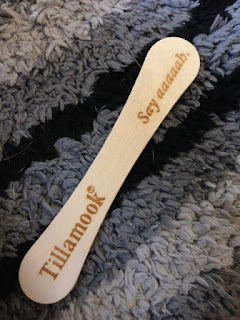 On my schedule today is the Myrtlewood Factory (can't come to Oregon without stopping in there) back to Pacific Oyster for some clam chowder (hoping they are now open), then to Tangled Yarns to learn how to add one bead at a time.  I have a bad feeling about that one ... I think all the beads need to be added before you start ... which means I get to undo everything and start all over.  THAT my friends will require a scone AND an ice cream bar!!