The early bird gets the worm, and this guy was out hunting  EARLY!!   At first I thought it was a robin, but on further inspection, it's not.  Just a fat, happy camper snatching up worms from the rain!!  By the way, I DID go to the Farmers Market in Tillamook last Saturday.  I was the only one there.  Apparently they cancelled it due to the weather and forgot to email me. 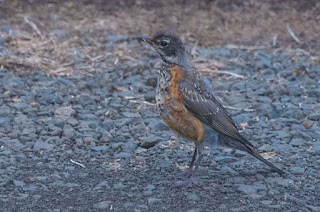 Unlike the birds, Cooper just wanted to sleep in ... unusual for him. 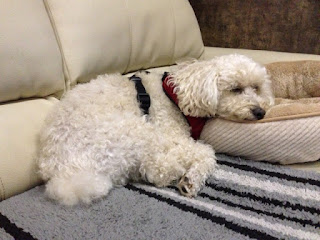 Number one on the list for the day was to hit the Fish Peddler restaurant at Pacific Oyster Company in Bay City.  It's not really easy to see ... just look for this trailer at the entrance, and drive out on the wharf past the blue building. 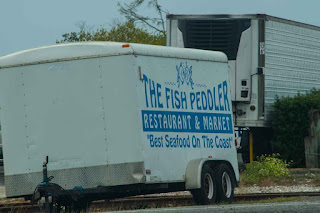 Rather nondescript, you'd never know that the best clam chowder on the Oregon coast is made here.  Even if you don't want to eat lunch, it's a neat place to learn about oysters.  The plywood repair is from Saturday's accident where a car went through the window.  Don't worry about the looks of the building, there really is a restaurant and fish market inside. 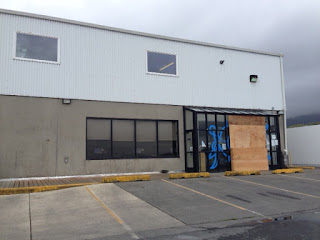 I think it only fair to state right up front that I have only eaten one oyster in my life, and I will never eat another as long as I live.  That one was from a restaurant in Crescent City ... and it was rotten, spoiled, gross, nasty, yucky!!!  Yes, one bad apple DOES ruin the barrel!!

If YOU like them however, this is the place to come.  They grow their own in the bay, then load them into boxes that are eventually dumped in the stainless steel trough.  All of this is visible through the glass windows in the back portion of the restaurant. 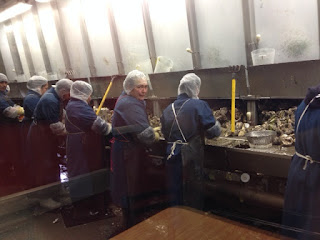 These workers shuck the oysters into cans with their tag on them.  Every time the full can is dumped, the tag is scanned.  They are paid about three cents each for every oyster they shuck.  It's a dirty job that should have been a show on Dirty Jobs with Mike Rowe!! 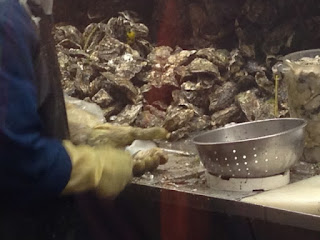 From the cleaning station, they go through the washer into the canning side.  Here they are sorted and packed in one pound jars or 20 pound containers.  Employees are very friendly ... wave and say hello!!  If you want to see the entire process, there is a tape playing on the television on the back wall describing everything.  It's pretty interesting to watch. 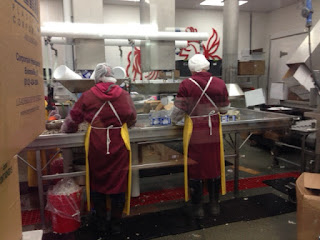 Since oysters aren't on my list of edible things, I had a shrimp po boy sandwich that was twice as big as I could eat.  The fries were yummy and their tartar sauce delicious!!  The best news was that at 11:30, I was the only one in the restaurant.  School must be back in session!! 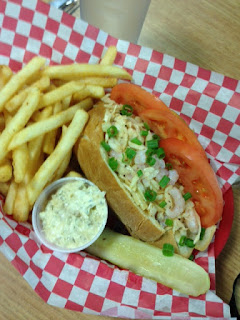 On the way to Garibaldi, I stopped in at the viewpoint, which doesn't really have much of a view. 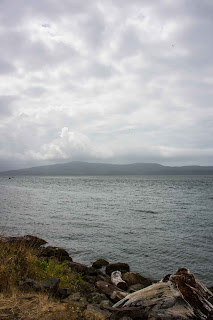 There were some friendly fishermen out in the bay however.  I didn't see them catch anything but a beer, which I assume is why they seemed to be having a good time.  They gave me a nice BIG wave!! 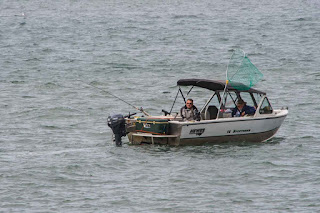 My third stop was the Myrtlewood Factory in Garibaldi.  This may not be the best place to purchase myrtlewood products, but they had a couple of things I was looking for, including a nice french rolling pin and a wooden spoon to replace the one I caught on fire. 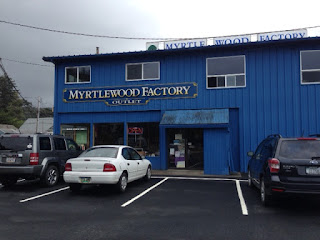 They also had this unique jewelry box, perfect to leave on my bathroom counter to catch all the new necklaces I've found.  It's pretty unique the way the three drawers pull out.  Oh, the fire??  Yeah, I left my wooden spoon a little too close to the flame on my stove.  A quick dunking in a coffee cup put it out.  It's always an adventure in MY kitchen!! 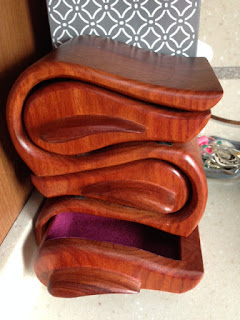 You know I would never go to Pacific Oyster without getting some of the clam chowder to go.  It's just as good as I remember, including the smoky bacon they use.  In case you were wondering, I tend to use paper bowls and plates exclusively.  After all, I have to do the laundry, clean the rig, take out the garbage, cook and feed the dogs.  I don't want to do the dishes too!!!  The clam chowder was mouth watering and delicious!! 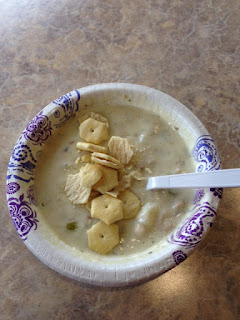 Bad news about the beaded scarf I'm knitting.  I guess the lady who said she would teach me, didn't really know what she was doing.  ALL the beads have to be strung on the yarn FIRST.  I had to rip out the entire thing and start over, with different beads, since she didn't have any more of the color I was using.  Seems I need TWO boxes instead of one.  Pretty disappointing.  After three hours, I'm almost back to where I was.

Remember that step brother of my friend that I met here at the Elks Park?  He knocked on my door last night and invited me to lunch (along with his wife and several Escapees) at the Fish Peddler today!!  YAY!!  I get to have another bowl of clam chowder before leaving tomorrow morning!!  I'd love to spend a few more days here, but I'm missing kite flying.  I'm hoping the beaches in Newport will have nice winds waiting for me.

Posted by Nancy Kissack at 6:43 AM