It's A Guessing Game!!

Do you know where I'm standing in this picture??  Just north of a HUGE rain storm dumping lots of water on my rig!!  Actually, it's Yaquina Head, before the lighthouse which stands on the North side of Newport.  As you enter the park, turn left towards the Quarry, drive down to the bottom and park and you'll have access to the tide pools below. 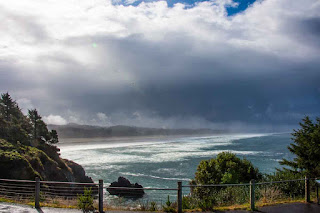 I checked the tide tables and discovered it was now or never.  It was only going to be low on this day, so off I traipsed down to the sand.  I bet you can guess what THIS is!!  Lucky for me I spotted this spout immediately.  That meant climbing to the top of the rocks and holding on with my toes while I took these pictures. 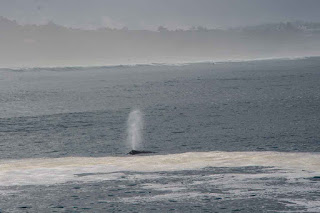 There were no tails this time ... but this is the biggest whale I've EVER seen!!  It lounged around taking breaths every few minutes, then slid back beneath the water. 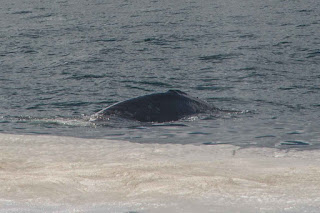 Can you guess how many pictures I took??  If you said over 100, you were right.  It's a good thing I wasn't shooting film!! 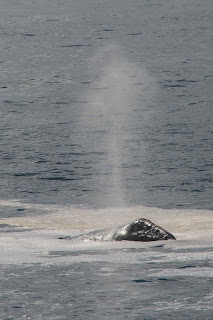 I wish I could have put something in the image to show you the size.  Immense is probably a good word!!  This is the biggest whale I've ever seen, at least bigger than my RV! 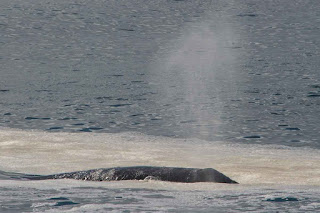 The storm still threatening, I headed back to the tide pools to see what I could find.  Did I get arrested for taking stuff from the beach?? 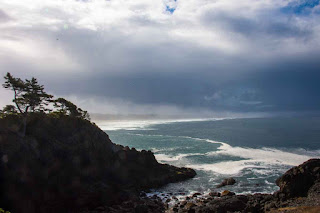 No ... at this beach you can touch anything, as long as you don't hurt it and you can take all the driftwood home that you can stuff in your pockets.  There were a lot of small unique pieces here. 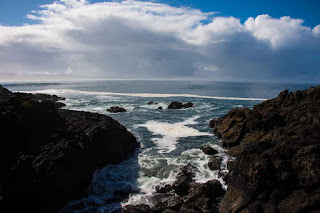 What do you think this is??  No clue??  Me either, but it's attached to all the rocks in the tide pools.  It's a sea grass, kelpy kind of thing. 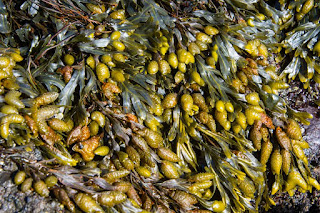 Everyone knows what this is ... anemone.  There were many on the beach, but most were closed due to lack of water.  This one was still underwater in a small pool.  You can touch them ... they're kind of soft and slimy and will retract their arms. 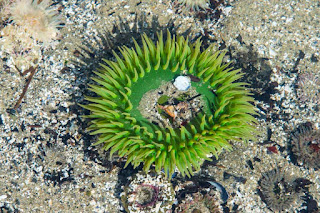 Can you guess where I am here??  Most people who have been through Newport, have stopped at South Beach Fish Market.  If not, you are missing out on some of the best fish and chips on the coast. 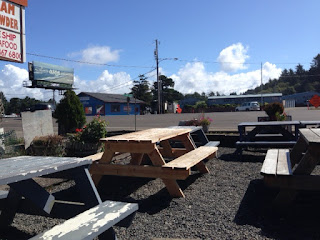 I stopped for lunch early to beat the crowds, but since school has started, most of the crowds are gone.  This is my favorite $14.75 halibut and chips!!  YUM YUM!! 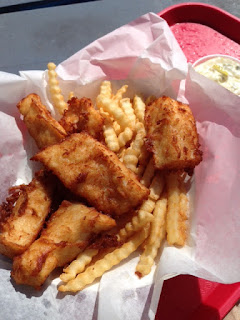 The rain has finally gone and the wind is coming up .... any ideas what I'm doing here??  Three guesses!!!  Ah, you looked at the next picture.  Yes, this is the same beach we were kite flying on several weeks ago.  The big difference is the level of the water has risen well over 100 feet, leaving little room for flying. 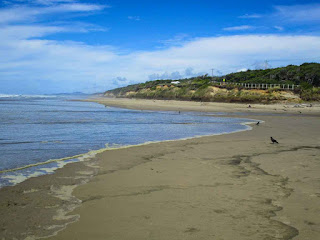 As you can see by the junky stuff in front of my kite, the tide now rises all the way to the back of the beach.  I set up in very little wind, making adjustments until I finally got it in the air.  At about 4 mph, I couldn't try many tricks, but flew until the water was a few feet behind me. 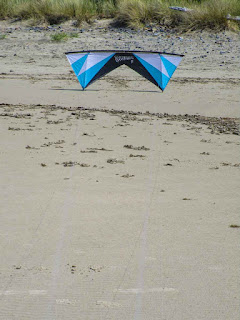 Two new huge logs were deposited on the beach in the big wind storm last week.  I wish I had been here for some pictures!!! 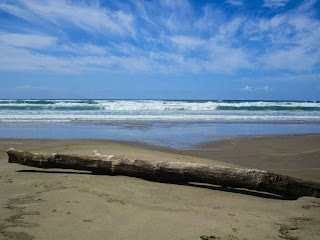 That's my kite bag, just to show how big THIS log is!!  It's almost up against the bank, and as I played with my kite the water came right up to it.  Not wanting to get slimed, I put everything away.  The water is covered with foam and junk from the wind storms, leaving mucky stuff all over the beach. 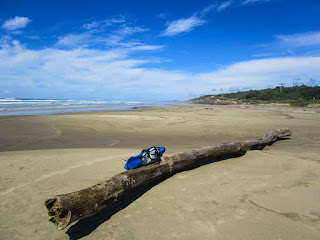 Do you know what this is??  It's the elusive black and gray shoefish with it's big gaping mouth.  Watch out for the spike underneath ... it's a killer!!  Ever wonder how a single shoefish landed on the beach?? 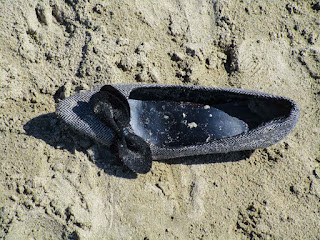 Last question of the day.  What do you think this gentleman is doing??  RIGHT!!  He's walking all the way down the hill to the lodge (and up the opposite hill) in the middle of the road!!  If you are going to take your life in your hands, you should definitely wear your hearing aid so you can hear cars behind you. 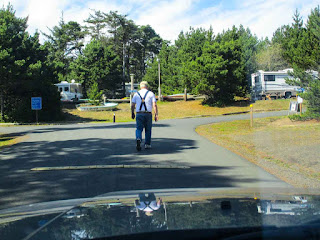 He was huffing and puffing, so I offered him a ride to the top.  He declined .... said he was getting his exercise for the day.  Good for him!!!  But does he get run over??