It started out like any other day, at about 5:30 in the morning.  I had a long list of things to do, but Cooper had other ideas.  He's become such a snuggle bunny and of course once he's asleep, I'm paralyzed and can't move. 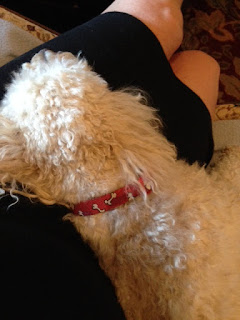 I finally ordered this cheap little Weber barbecue for the rig.  It turned out to be not exactly what I wanted, but it's small enough to fit in the rig with ease.  Unfortunately, I had to assemble it, which you know isn't my forte.  Without written instructions (only pictures), it was a little confusing. 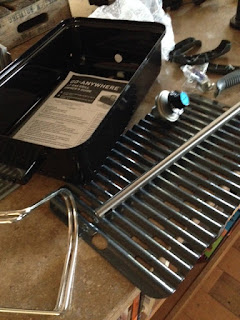 When I got to the point where I should install the lighter, this tag was attached, giving me more than second thoughts.  There may be an explosion in my future according to the label.  I'm hoping to find someone willing to light it the first time while I stand VERY far away!! 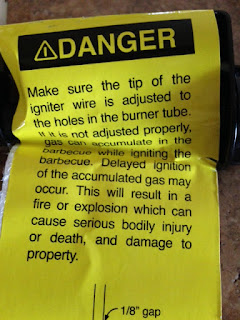 It's all together, now I just need that volunteer!! 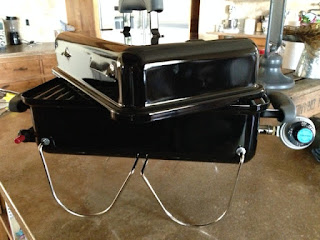 After a quick run to the grocery store for supplies ... I have to bring a salad to tonight's potluck ...  I put all the bags on the counter to unload them.  I nearly freaked out when I felt something crawling on my arm!!  What the?????  It's an ant!!  Must have crawled on the bag when I set it down to open the door.

Then there was another ... and another ... then the light bulb went on!   I realized the entire counter was covered with ants.  YIKES!!!  There's nothing worse than a kitchen full of ants.  Seems they found my sugar container, the one I had just filled to the brim.

I didn't have much in the way of spray, but found some wasp killer that seemed to do the trick.  I cleaned and cleaned, killed and killed!!  When I thought I was done, I wasn't.  Upon opening a drawer with the brown sugar, there was another whole invasion!!  Three drawers and one electrical outlet later, I THINK I got them all.  I sprayed everywhere, all of which will have to be cleaned up at a later date. 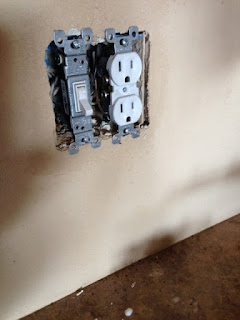 Still under smoky cloudy skies, I got a couple of sunset pictures, but the moon remained elusive.  I caught one very small glimpse of an orange globe, but it was immediately obliterated by clouds and smoke (another good reason to leave California) before I could even get my camera on the tripod.

I waited and waited ... everyone else was posting pictures of the eclipse so I turned off my phone.  By 8:30 it peeked out from behind a cloud, but the color was gone.  Here I was finally ready ... biggest lens, tripod, remote shutter ... the whole shebang ... and the moon didn't cooperate.   Now I have to live to be at least 82 to see the next one!!

I'm loading up again for a quick trip South.  Once I get there, I'll process the pictures I did get and post them.

My internet was acting up this morning, which doesn't surprise me.   I haven't signed up for the NEW internet which takes away my unlimited account.  Since I'm getting emails daily that it will crash November 6, I imagine I will have more and more troubles.  When I get back, I'll check out what's available, although that's not much in my area ... and unfortunately they know it!!  I think my days of an unlimited use account for $40 a month are over.  The new service by Sprint will be close to $100 a month.  The interesting thing to note is that my MiFi is Sprint and doesn't work at my house.   ????