It's The Little Things!!

I've seen lots of this over the last several days ... fog, rain and dark clouds.  It was sprinkling again yesterday morning as I packed the rig and hooked up the jeep to the coyote choir singing in the background. 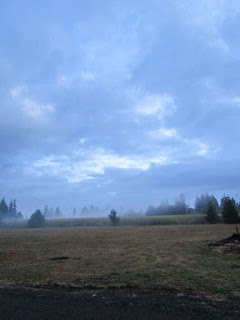 For some reason, I was extremely nervous this trip.  It didn't have to do with driving (that doesn't bother me at all any more) but finding a site at Newport Thousand Trails.  It's always been a throw of the dice in this popular park, whether you will find a site and if you will have the company of television due to the trees.  The trip is a beautiful one, but I almost forgot to take pictures. 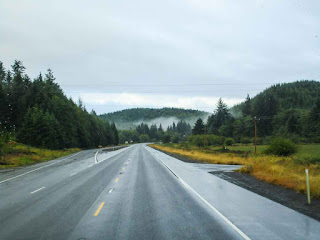 Driving through the mountains, all I could think of was backing in to a site with no help.  Maybe THAT was why I was so nervous.  Being so distracted made the trip go pretty fast.  I was in Lincoln City before I knew it!! 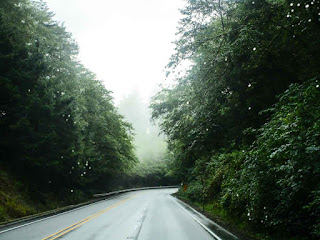 Most of the highway from Tillamook is inland, giving you no clue as to the beauty beyond the beach.    Since the weather was rather rainy, the surf was full of white water and big waves. 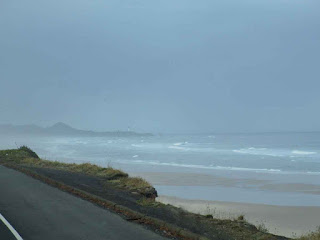 I finally arrived at Thousand Trails and parked on the road side while I checked in.  If you plan on parking on the North side, that trip through the gate and around the corner, only to exit the park, is a killer one.  VERY tight corners were not a good thing as nervous as I was.

I surprised myself as I raced from the keypad, jumped in the rig and hit the airbrake in time to drive through the gate without hitting anything, or having the gate arm hit me.  Whew!!  That's one down, now to park.  I unhooked down at the lodge and drove the rig to look on the East side where the ranger said there was a couple of open spots.

I guess open is a relative term ... they were clear back in the bushes so far I couldn't even SEE them!! I did find one site available with a nice large tree to back around.  Amazingly, even though my heart was in my throat, I backed in like a pro on the first shot and didn't hit anything!!!  Okay, I was kind of crooked, but off the road, so I didn't care.  I tried the satellite dish right off the bat.  NO DEAL!!  It just whirled around in circles.  Oh well, I guess I can live without TV for a couple of weeks.  My nerves are at an all time high at this point, as I tell myself to just RELAX!!!

When I went to get the car down at the lodge, I decided to drive to the other side where we stayed before.  There was actually one good empty site.  As I continued on around, I saw a gentleman at the very top pull through site, hooking up his car.  OH MY GOSH!!!  I hit the brakes and jumped out of the car as he started laughing.  He knew exactly what I was about, as did his lovely wife who came out to chat!! 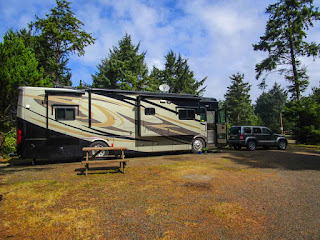 As he pulled out, I pulled my car in, then hiked back to get my rig.  It was a quick park and unpack, as I danced around being thankful like you cannot imagine.  It just goes to show that it's the little things that can totally change your day and make you happy!!!  Like a great parking space with television access and full hookups with NO neighbors.  Yes it's a toxic dump from the guy whose sewer line broke when we were here a month ago ... but I don't care!!!  I've got a box full of rubber gloves and a bottle of bleach!!  Let the good times roll!!!!