The Big City Of Hanford!!

Sometimes you just have to bite the bullet and do that "meeting thing".  As the Ice Cream Captain for the Western Motor Home Association Rally in Indio, I'm expected to attend the planning meeting held in Hanford California.  The only redeeming factor is the local ice cream store ... Superior Dairy Products.  Although I haven't had the pleasure, one scoop is equal to a pint of ice cream and will cost you $5.00, not to mention the banana split that feeds six and then some for only $7.00!!  Since this meeting destination is so close to my home, I don't bother with the tow vehicle.  Maybe I can thumb a ride!!

Previously, I have had only a 110 plug, if that.  The big dudes get the full hookups.  Even so, I decided to arrive early to beat the heat ... figuring I'd just sit inside with the generator running.

Guess what!!!  The early bird gets the worm ... and I got a 50 amp hookup on the end.  YAY for me!! Many rigs came in, but continued on down to check in.   I asked the first gentleman I saw upon entering if there was anyone parking us, and since he said no, I just backed in to the perfect spot. 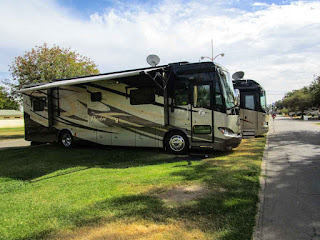 About an hour later when I saw my friends Kurt and Betty Simon come in, I ran into the roadway and flagged them down to park in the very last 50 amp spot next to me.  Needless to say, they were most appreciative.  They are considerably longer than I am, so I loaned them my cones to be sure no one ran into their hitch.  You know how these old drivers are!! 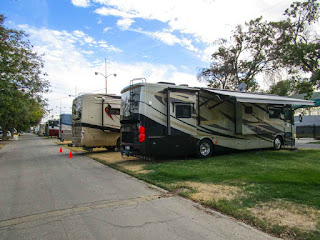 In getting ready for the super moon last night, I took a couple of sunset pictures.  Between the clouds, smoke and smog, it was definitely gorgeous. 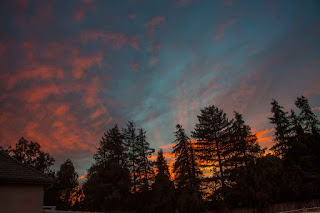 At the appointed time, I was front and center with all the necessary equipment, only to have the clouds totally block the moon.  Nothing ... blackness!!  I went inside, but couldn't stand the thought of not getting any pictures, so I went outside maybe five times, to be disappointed every time. 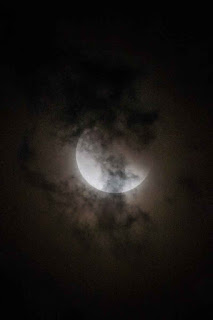 Finally about 9:00 it peeked out from behind the clouds, but there was still so much smog that the pictures came out fuzzy.  Too bad it wasn't clear like the previous night when I got a great image!! 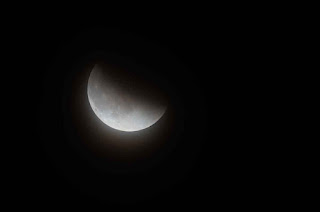 C'est la vie ... I guess I'll just have to hang around another 18 years to get a good picture of a super moon eclipse!! 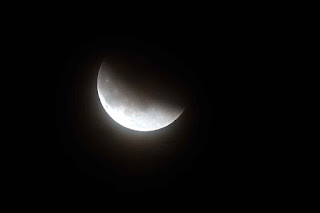 At 5:00 there was a happy hour with a potluck dinner at 6:00, for which I brought a broccoli salad, as did three other people.  Easy to prepare the day before, then just throw it all together with some dressing.  Everyone definitely got their broccoli on!!  Betty made an amazing blueberry salsa salad with gorgonzola cheese!!  Stuffed to the brim, I played with the puppies until bedtime, counting the number of trains that went by.

We seem to be between two sets of tracks, with trains running all night long across five intersections.  If moving products by train is any indication, we are in a big boom!!  There was only one weird one that had a funny whistle, like a tinker toy train.  No idea what THAT was!!

Today is a long meeting, followed by lunch and another meeting and more food, all catered.  I hope they don't have broccoli salad!!

It's a cool 70 degrees this morning so all my windows are open, hoping to capture some of it before the sun comes up.