Playing With The Kitties!

The West Coast Game Park Safari is my favorite place to visit because of the kitties.  Not your normal house cats, but the big kitties they raise by hand to be used for educational purposes, as well as getting them used to human contact at their new zoo home.  That's not to say I'm a proponent of raising animals to keep in cages, but at least all of these will have good homes in large zoos with appropriate care.

This was Tiana four months ago.  She was pretty tiny and dare I say skinny, fitting on top of the log at nine weeks old. 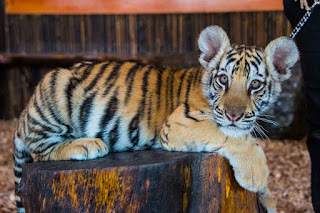 Here she is now ... a big girl close to 75 pounds.  Obviously she doesn't quite fit on the same log!!  In growing up, she's not quite as playful as before when it comes to toys.  Now she wants to make YOU the toy!!!  Since it wasn't crowded on Monday, I got to spend lots of one-on-one time with her. 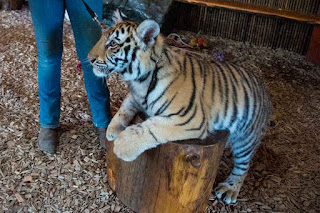 She's eating meat and doesn't really need the formula, but it's a treat that keeps her occupied while visitors pet her on the back. 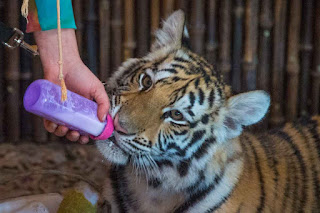 One of the tricks is to pour water on top of the log, which she likes to lick.  She's soft as a bunny and loves her neck scratched.  This is probably the last time we will see Tiana, as at six months they are deemed too large for personal contact. 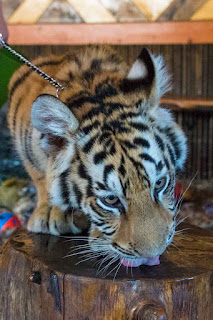 Here's little Miss Lexi at about eight weeks of age when I was here four months ago.  She played just like a kitten, jumped up on my shoulder and climbed to the top of my head.  Talk about a fun playmate!! 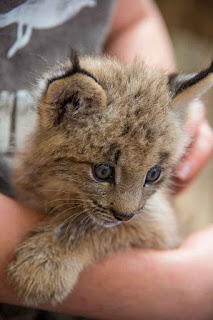 Here she is four months later ... all grown up!!  She is softer than the softest kitty I've ever petted.  Constantly on alert for creatures to eat, she had her eye on a couple of peacocks walking by. 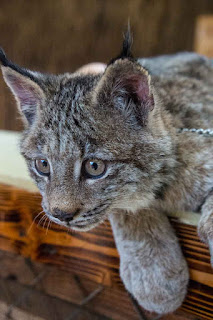 Look at those feet!!  I can't believe they are almost bigger than her head!!  Lexi is a Canadian Lynx and those feet make it easier to walk through snow.  She's still a little awkward with those long legs. 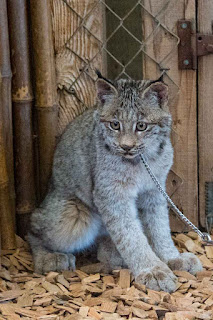 I was dragging her teddy bear around while she played attack!!  I mean really, look at those hind legs!!!  They got tangled up a couple of times, but with a little more practice, she will be an amazing acrobat!! 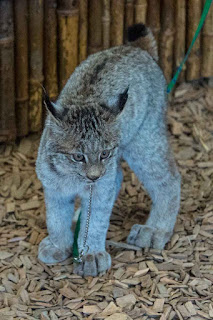 There were two cute fat little donkeys who followed me around also.  It wasn't that I had food ... I just knew where to scratch their ears!! 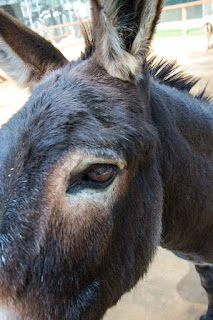 I don't have any pictures of Bonnie and Clyde, the black bears.  The U.S. Animal Inspection guy was there and deemed them too large to have public contact.  They are double the size they were last time ... bigger than a large black lab dog, huffing a lot instead of bawling and squalling!!  Their cage just has too many layers of wire to get a good picture.  This unrelated pair will remain together for the rest of their lives, which is nice to know!! 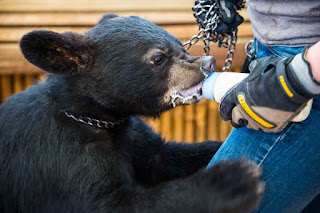 I made it to Eureka and found only two other rigs parked in the lot.  NICE!!  It was easy to get a great site away from everyone else.  That didn't last long though!!  Come on guys ... there are 20 some sites here where you could have two empty sites on either side of you, and you choose to park two feet from my slide out!!  You let your engine run for 20 minutes while you made that decision, continued to let it run while you set up the electric AND water and it was STILL running when you put your slides out!!!   I'm glad to know you have an unlimited supply of money to pay for that diesel you just burned up in the hour and a half it took you to get settled!!  I just don't understand!!

Sadly, I'm on the last leg of this trip, hoping to arrive home sometime this afternoon.  Time to gear up for house and rig cleaning.  At least the puppies will be happy to run loose in the back yard!!  That is if I still HAVE a back yard!!