Why I LOVE Photography!!

Rain yesterday morning kept most of the camping folks locked up in their tents.  Honestly, I don't remember this being much fun even as a kid, when we took our yearly week long vacation.  I only remember being cold, wet and bored, as I'm sure these guys are.  At least we got to go fishing!!

Can you tell I had nothing on my schedule Sunday?  I sat around and people watched most of the morning while watching the NHRA drag races. 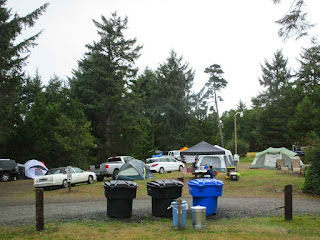 Here's the first clue that these people don't camp often.  This lovely well built fire smoked out just about everyone above me.   Thank goodness I'm far enough away and not downwind!!  I can't say the same for the generator guy.  I'm feeling pretty bad for him at this point and it only gets worse.

Soon, a guy showed up in a van and parked next to generator man.  He promptly complained that he had no fire pit ... he's in overflow ... so TT brought him one and installed it about 15 feet from generator man's front door.  Ten feet from his BACK door, the guy in the van set up his tent.  I guess there's no such thing as consideration when it comes to camping, as his dog runs loose around the area!! 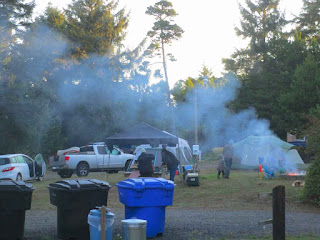 A group of six went out to play frisbee golf.  You know, throw the frisbee into chain filled container-like things to score.  I have no idea how many chances you get, but it wasn't enough for these people.  One frisbee immediately got caught in a tall tree.  The second frisbee followed suit, as did the third, trying to get the first two out.

They threw rocks and sticks right and left, until one kid got the bright idea to jump off the other's back.  He got high enough to grab the branches and was promptly flung high up off the ground.  It was then he realized he was 10 feet in the air and had to let go.  CRASH!!!  I guess that sprained ankle was worth getting two 50 cent frisbees.

When it was about time for the sun to set, I grabbed my camera and went to the beach.  THIS is why I love photography!!  I get to capture moments in time ... memories of gorgeous beaches, critters and sunsets.  The tide was coming in over hard compacted sand, making nice reflections. 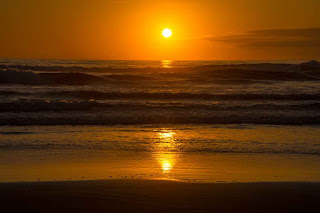 There were a few birds flying around looking for dinner, including these two, who were scarfing up something at the waters edge as they walked along.  A couple of times a wave gathered them up, forcing a swim back to shore. 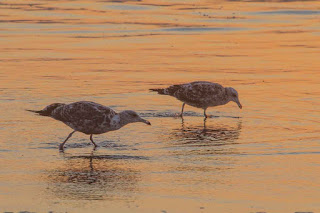 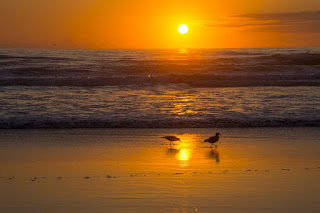 I must be getting more selective ... I only shot 77 pictures this time!!!  The waves were breaking much further out and were high enough to block the sight of the horizon occasionally. 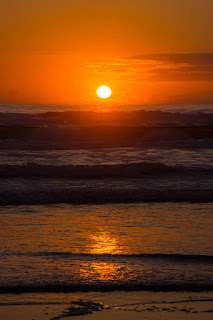 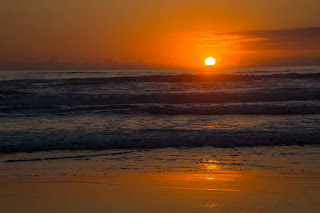 As the sun set behind the fog bank, I could see trees sticking up on the horizon, which I knew couldn't be.  As I looked closer through the viewfinder, it was fingers of fog reaching up to the sky, backlit by the sun.  That's something I've never seen before. 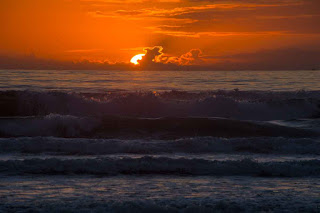 Just another amazing day in paradise on the beaches of the Oregon Coast.  Too bad the campers missed the best part of the day.