No, it's not because of all the cookies and muffins I bought at the Farmers Market, it's because the wind finally came up enough to get in an entire DAY of kite flying!!

But first, I took off early for Nye Beach for some before and after pictures.  Although foggy everywhere else, this beach had a slight breeze that kept it moving.  I was surprised at the number of people up so early on a Sunday morning and walking down the streets.  This picture is looking North up the beach.  It really doesn't look much different than the next image. 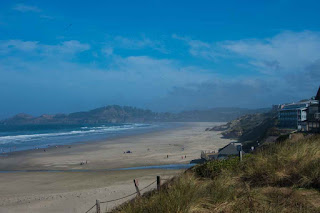 This picture (from a book about Newport) looking down the same Nye Beach was taken in 1915 and shows not only people, but horses and a couple of cars!  All of the buildings along the cliff in this picture are gone with the exception of one. 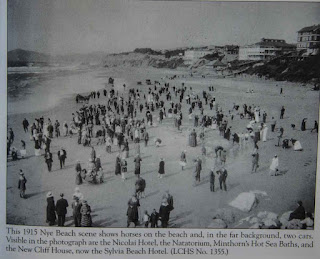 Beach street shown here, was the main entrance to Nye Beach in the early 1900's, and remains so today.  It's a pretty tight squeeze however.  In 1915 you could drive right on to the beach.  Now you will find a parking lot and turnaround at the bottom. 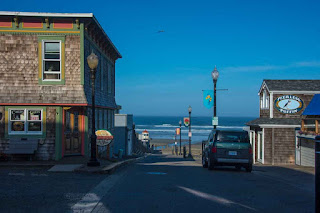 The building on the left is the same in both images, but those on the right have gone by the wayside.  Some buildings burned down and some were torn down.  The Natatorium at the end on the left is gone also.  Built in 1911, it featured a theater, dance hall, bowling alley and a swimming pool with heated salt water.  You could even rent bathing suits if you didn't have one. 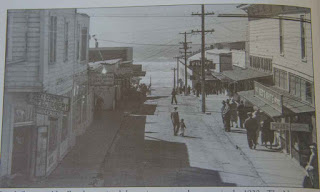 The only hotel still standing is the Sylvia Beach.  Originally the New Cliff House built in 1912, it was next to Minthorn's Hot Sea Baths.  Sylvia Beach was the writer/owner of Shakespeare and Company book store in Paris, so every room in the hotel has a writer's theme, like Hemingway, Agatha Christie, F. Scott Fitzgerald and Doctor Seuss!! 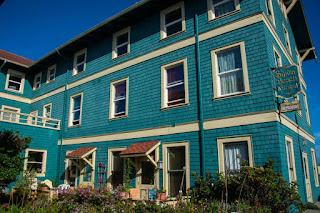 If you stay here, they guarantee it will be quiet and restful.  There's no TV, no cable, no wi-fi and no phones, but the rooms do have a nice view.  Although you will find cable and telephone plugs in the room, the services do not exist.  They were only installed at the request of the bank loan officer, who really didn't think they would survive.  When the bank had to resell it, they thought a big company would want the phone plugs.  So far, it's going strong, in spite of the entity that supposedly lives on the second floor. 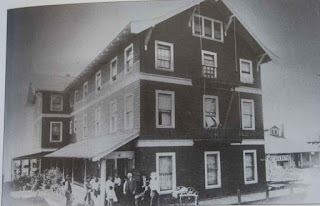 Looking back on Nye Beach from the far end, you can see the sand waves made by the tides.  I'm standing on what used to be a condo foundation.  In spite of warnings about the sand bluffs, they built condos here anyway, which were almost complete before the foundations eroded out from under the building and it had to be dismantled.

I'm not sure what bank put up the money, but they moved back a hundred feet and built another whole set of condos.  Apparently the locals aren't as easy to convince as the bank, because no one has purchased them, afraid they will again fall onto the beach below. 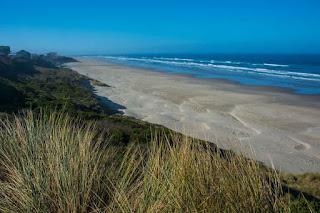 On the way back to the rig, I spotted this little sandy patch underneath the bridge.  You can park at the top on the northeast side and walk down a sidewalk towards the Coast Guard station, where a sign directs you to the Yaquina Bay trail.  Walk down the trail and you end up at the beach under the bridge.  It's a great quiet spot to watch the boats go by and have a picnic. 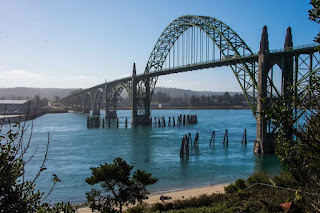 Back at the rig, I was hoping with the sun out, the wind would be up, so I quickly drove down to Lost Creek for the 20th time to be greeted by fog and wind.  YAY WIND!!  I busted out my kite and started to set up. 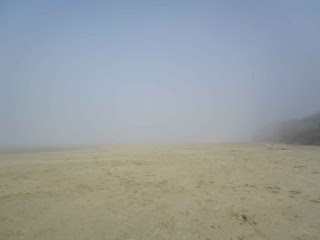 The first hour I could barely see the kite through the fog, but as the morning wore on, the wet stuff disappeared.  This is a new kite ... a Bazzer Mid Vent Revolution.  Barry "Bazzer" Poulter, raised in England, has studied art all over the world and has put his signature designs on revolution kites, not to mention his real signature!  This kite is really a piece of art! 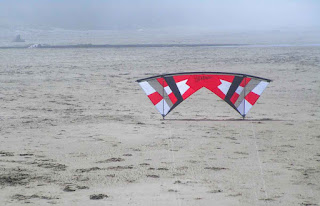 This being one of his older designs, and one someone ordered but didn't pay for, I was able to pick it up for a good price.  He just moved to Australia, so his kites may be harder to get and more expensive.  Let me tell you, this one flies like a dream!!  It's amazing how much difference a few seams make ... and where those seams are placed in the kite.  I was grinning from ear to ear!! 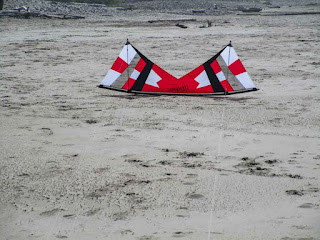 After three hours, I was pretty tired and hungry, so I headed back to the rig for a short rest and some nourishment.  The tide was coming in pretty quickly and was getting a little too close for comfort. 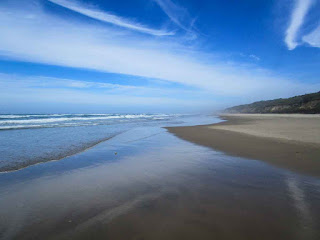 I couldn't stay away however, and by 2:00 I was back on the beach, but flying my lime green and black full vent since the wind had kicked up considerably.  By then I could definitely tell the difference in kites.  As the wind changed, I made adjustments when it dawned on me I could also make adjustment in the way I hold the handles.  I was flying upside down, backwards, sideways .. not always totally in control I admit, but flying none-the-less. 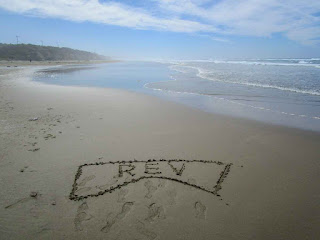 Three people even came up to me and said what a great kite I had and they enjoyed watching me fly it!!  One gentlemen was so excited he had just purchased his first two line kite, so I helped him set it up and gave him a couple of tips.  There's nothing better than a GREAT kite flying day at the beach!! For five hours, I was in seventh Heaven!!

Posted by Nancy Kissack at 7:08 AM