And You Thought I was Kidding!!

You know I joke about my cooking and the burials I have had in the back yard.  I'm here to tell you the whole truth!!  It's true beyond a shadow of a doubt ... all of it!!

Yesterday was no exception to the rule.  Here's some beautiful chicken fried chicken that actually came from my stovetop last week.  This was a major victory for me, along with the lasagna from the week before. 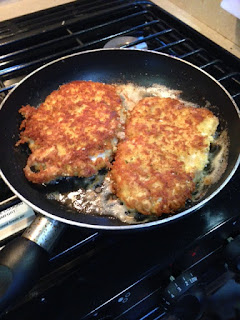 I have even been known to make a grilled cheese sandwich without setting off the smoke alarm.  Sometimes it takes two attempts, I'm sorry to say. 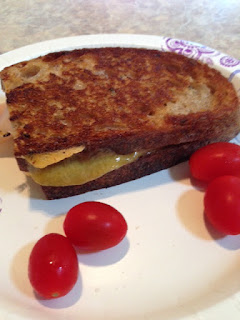 Yesterday however, my luck ran out.  After running the vacuum and dumping the tanks in readiness for the move today, I thought I would hit the grocery store and hang out with the puppies.  Boredom got the best of me, so I decided to cook that meal-in-a-bag stroganoff that I picked up at the Farmers Market.

My burners seem to run pretty hot, so I browned the ground beef on low, using one of my nice new wooden spoons.  Next up, add the package of noodles and spices along with four cups of water.  Up to this point I was doing good.

I stirred the mess and set the burner to low again, checking it every minute.  It was slow to get going, so I powered up the computer to check out a new sugar cookie recipe.  BIG mistake!!  In a matter of three minutes, the pot on the stove began to smell funny.

I could tell by stirring that the bottom had burned.  DARN!!  This was supposed to be lunch AND dinner.  I poured what would come out into a bowl to discover an inch of burned, charred crud on the bottom of the pan.  I tasted the concoction, second big mistake, and there was so much pepper, it burned my throat almost as much as it had burned the pan.  YUCK!!  That scorched flavor just doesn't do it for me.   Luckily I salvaged my wooden spoon.

Two hours later after soaking, I tried to scrub the pan to no avail.  I mean to tell you it was so badly burned that nothing was going to remove it short of a hammer and chisel.  I tried everything before the pot went in the trash, as did the mess of horrible stroganoff.  I probably could have buried it because even the bears wouldn't touch this stuff!!

A quick trip to the store and I began again, this time tuna and noodles ... comfort food to ease the pain of another disaster.  It was hard to make in the only three cup pot I had left, but THIS time it came out okay.  Edible anyway.  I missed lunch, but it was pretty tasty for dinner.

I'm now on the hunt for a new heavier pot.  I figure I'm lucky I didn't melt that thin one on the stove.

I was up most of the night with a sick Cooper again.  This time it was the heart worm meds.  That's the last one he's getting.  He gets sick every time, even though I break it up into two meals.  Maybe there's something else I can give him.   We never medicated our ranch dogs, even with millions of mosquitos, and did not lose one to heart worm.  Who knows .....  I'll check with the vet.

I'm heading to Florence today and hopefully some good kite flying weather.  My plan is to eat out from now on!!

Posted by Nancy Kissack at 6:38 AM