We ARE In Kansas Toto .. I Mean Cooper!!

First time ever in Kansas!  I'm pretty leery about this prospect since I've always heard about all the tornados around this area.  Barbara made me feel better yesterday by saying that Wichita was MUCH worse for tornados than Liberal, where we spent the night at the fairgrounds.  GREAT parking for $10 a night if you only use power.

First however, lets finish the Panhandle-Plains Museum in Amarillo.  From dinosaurs to transportation, a history on oil, gas and Indian relics, to an entire old west town built inside the building complete with real log cabins ... this museum has it all!! 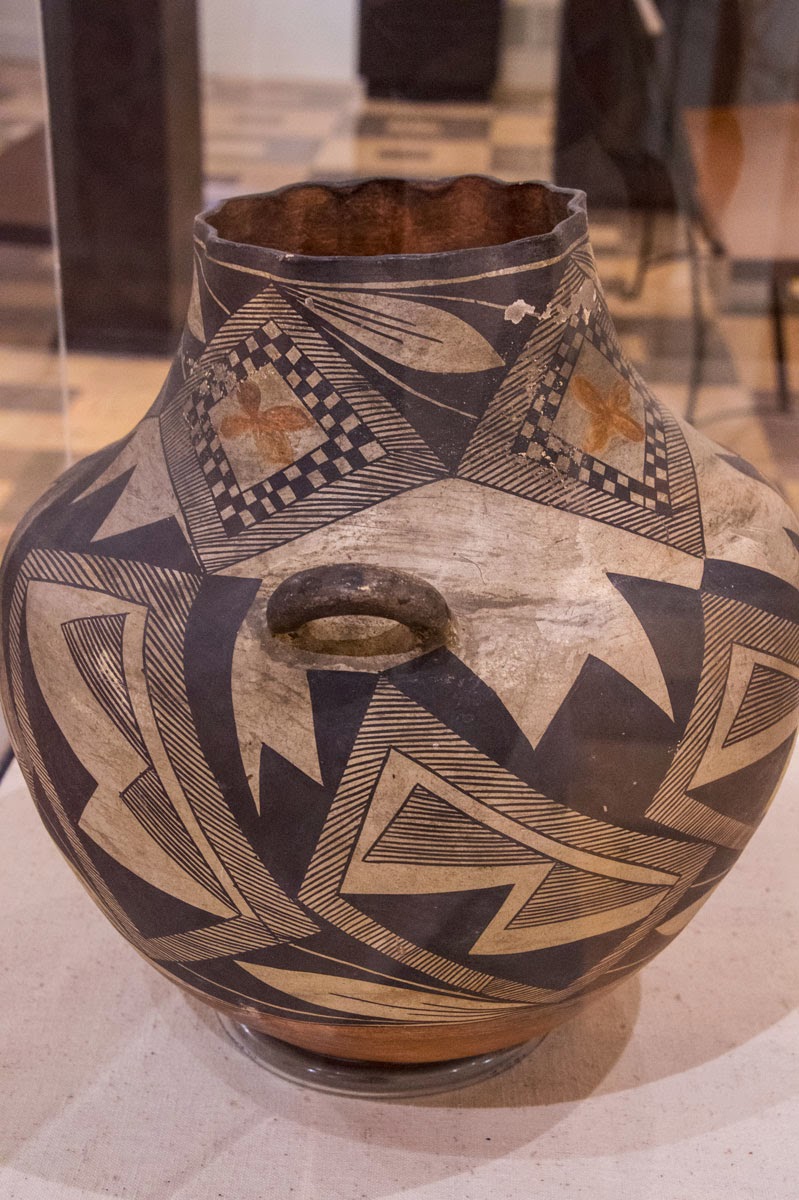 Acoma and Hohokam pots with wonderful designs ... it's hard to believe the Indians used these vessels on a daily basis. 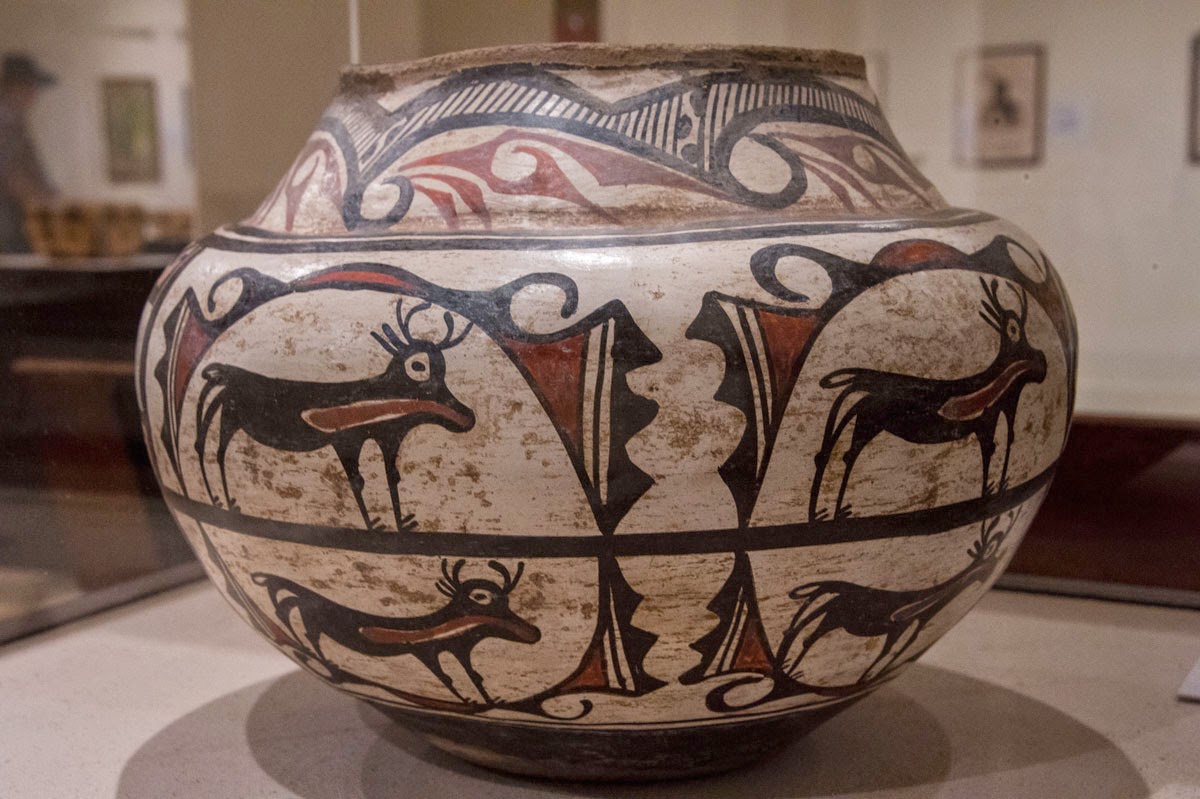 About half of the first floor is a recreation of an old west town, including this original cabin which housed six families during an Indian battle. 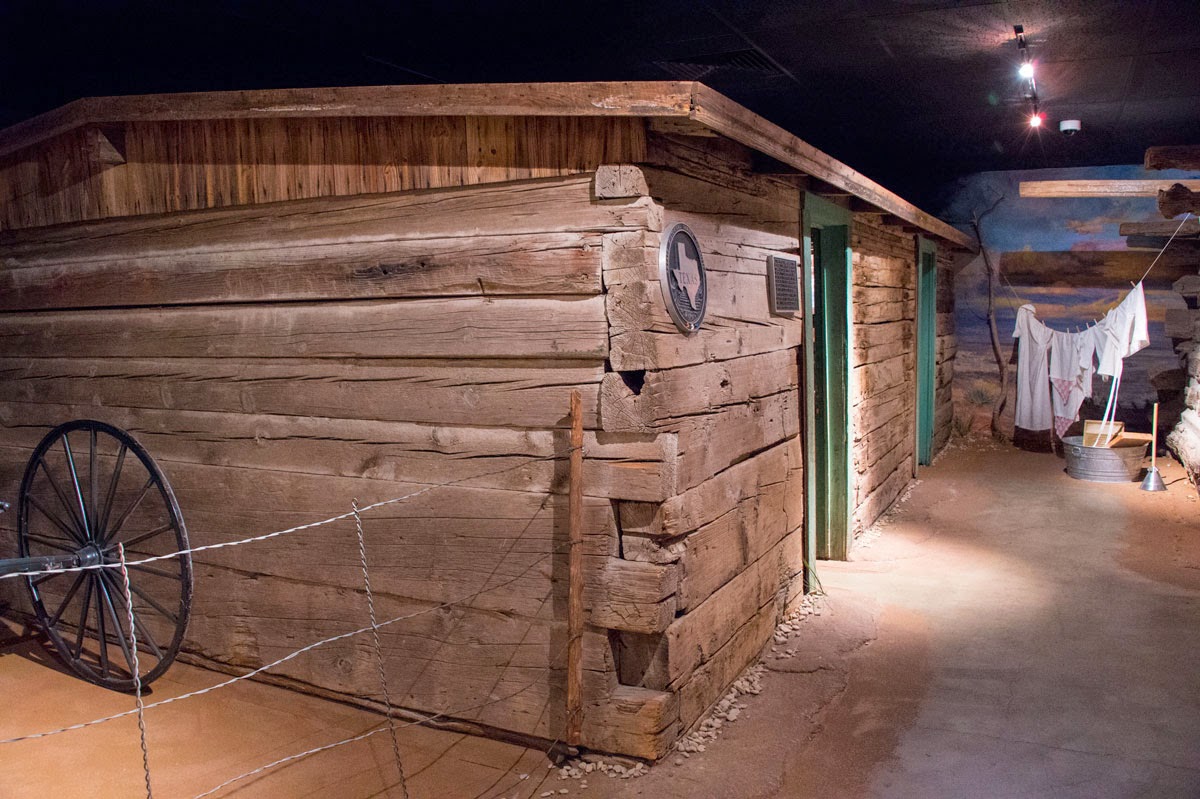 It was VERY small, but well furnished!  Can you imagine six families in a one room 20 x 30 foot cabin?? 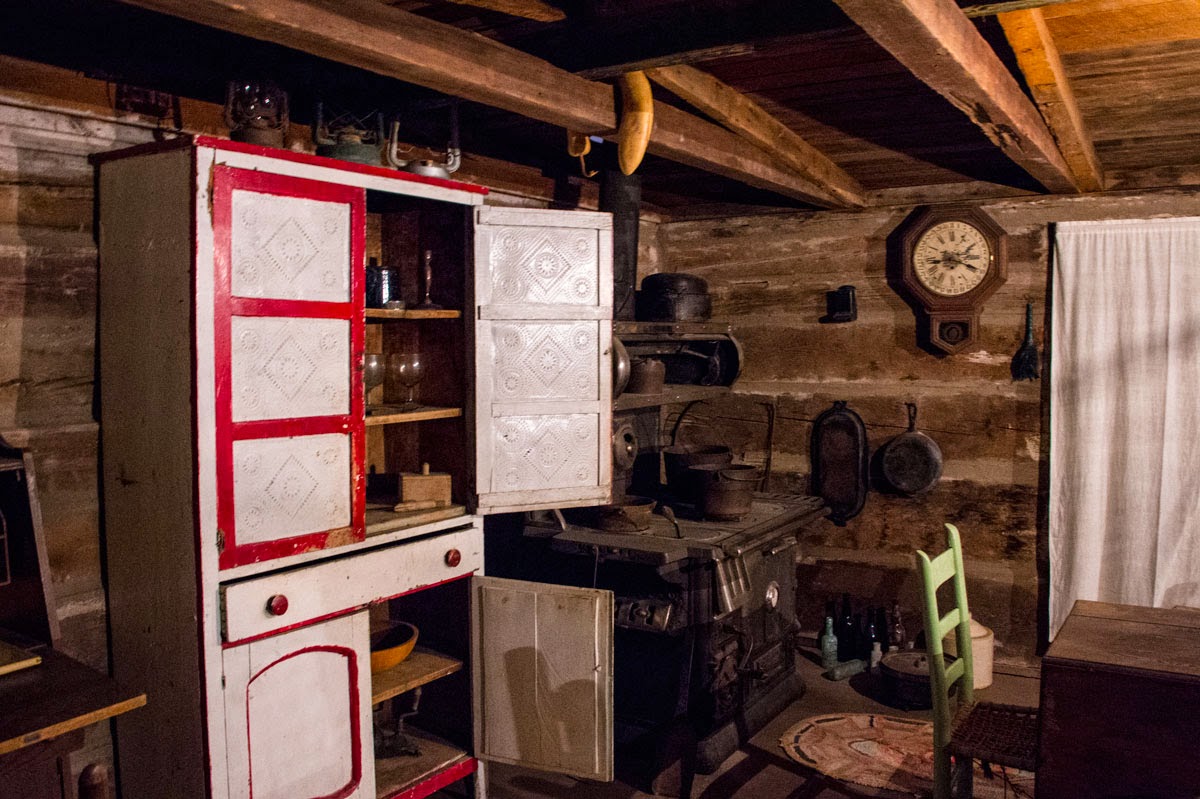 Barbara couldn't either ... in this dress she would have been in a magnificent mansion at the other end of town!! 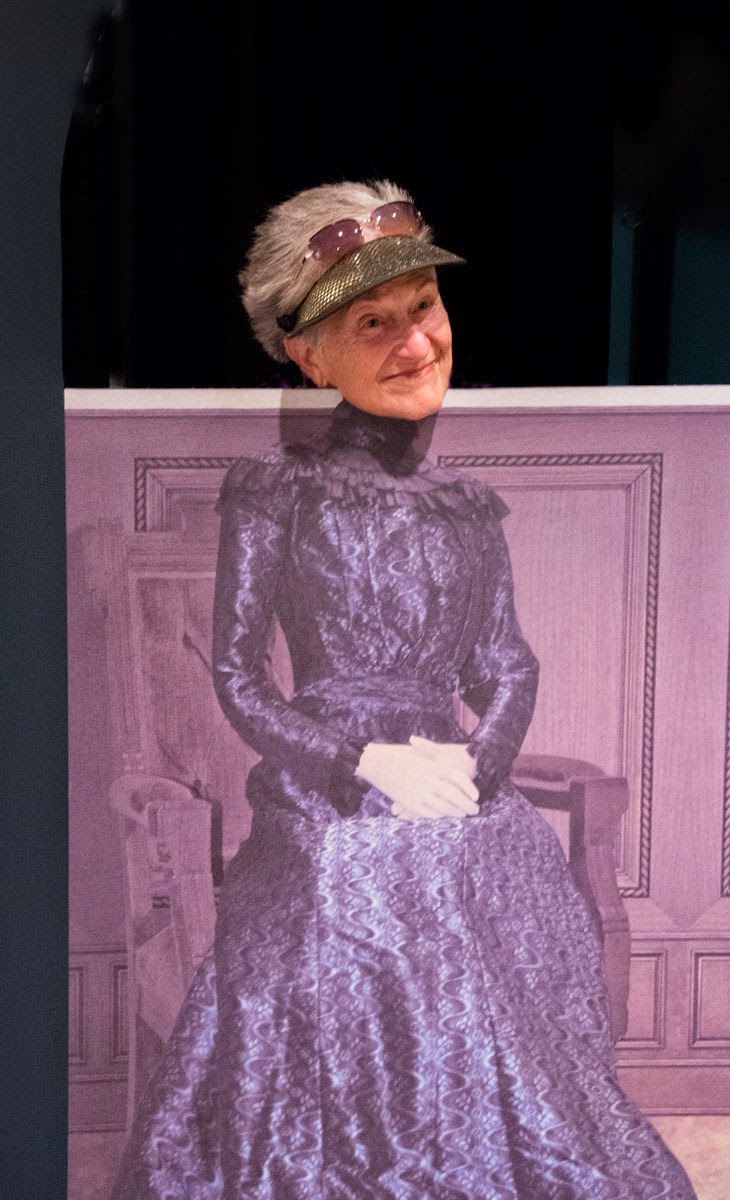 One entire room was dedicated to women of the west ... these are some of my heroes!! 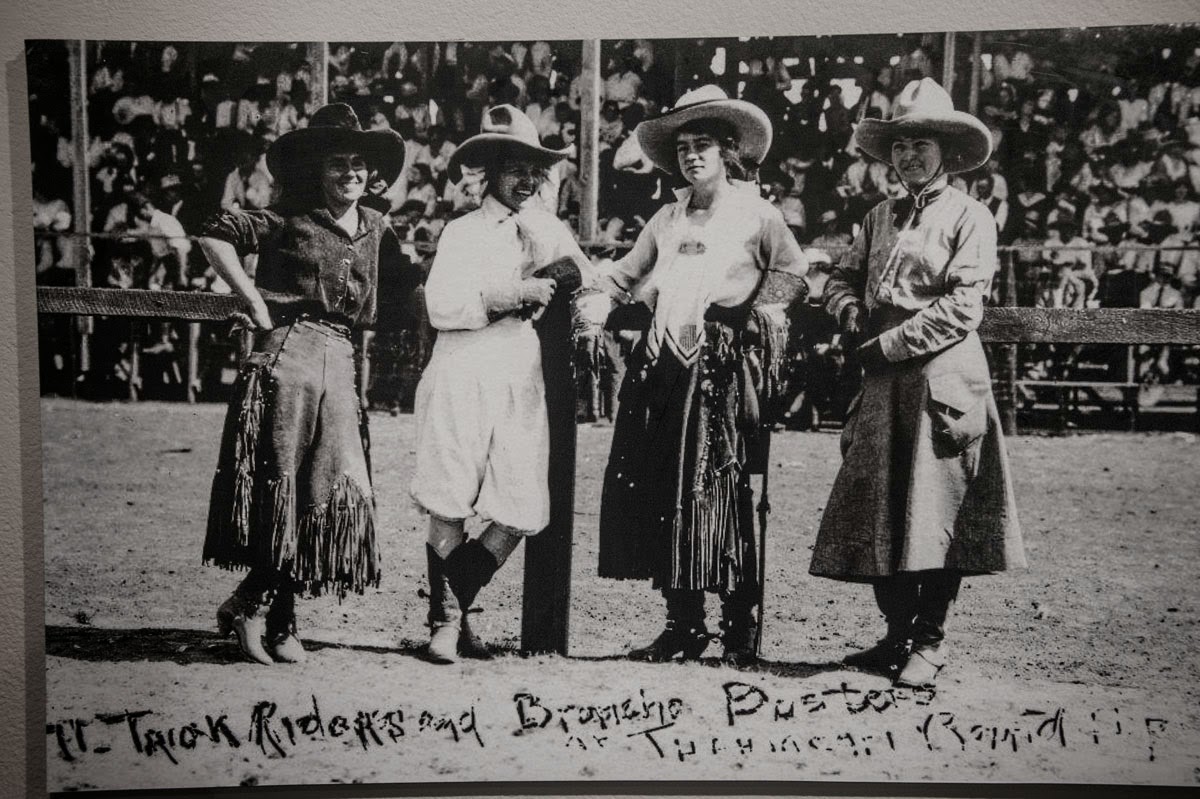 Early Friday morning we made a quick trip out to Cadillac Ranch.  Not what you would expect a ranch to be, but apparently this multi-millionaire oil baron buried these Cadillacs on his property, nose down.  This happens to be another cache ... one that's called cache in, trash out.  Somewhere along the line people started spray painting the cars, making them impossible to recognize.  Instead of taking their empty cans with them, they just dropped them on the ground.  How rude is that??  Now the owner has to deal with thousands of spray paint cans, and is thinking of bulldozing the cars down.  If you stop here, bring a plastic bag and carry some of the cans out to the huge "empty" garbage container right by the gate as you exit. 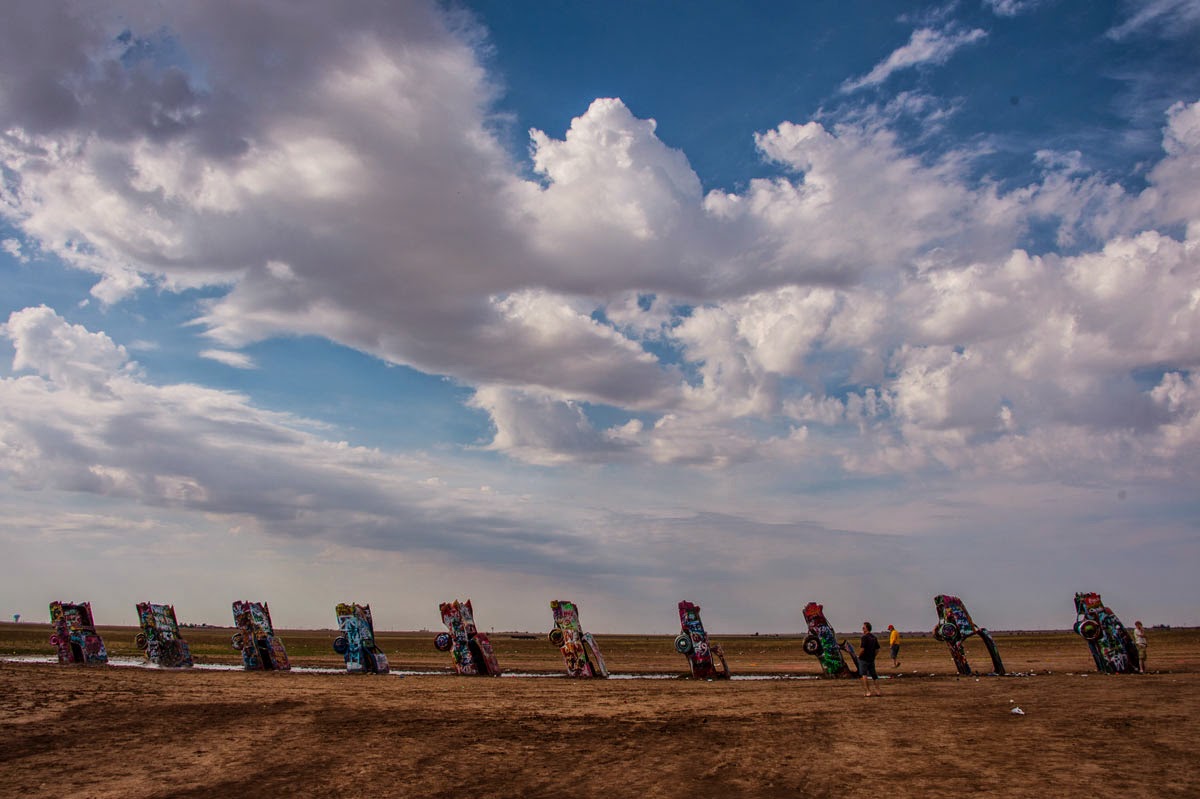 I would call this Colorful Cadillacs!!  A little bit muddy, it rained the day before we arrived.  Everyone says it hasn't rained in a VERY long time ... but everywhere we go, there's rain!! 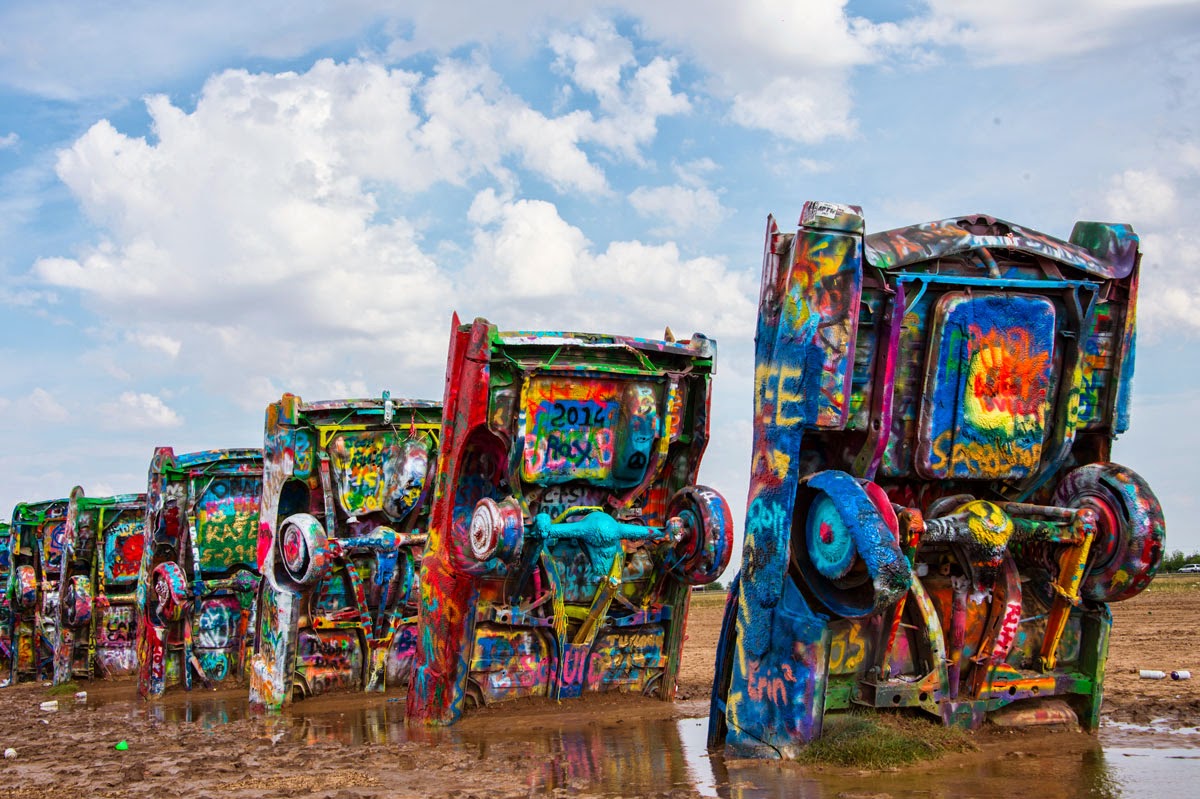 There's even a marriage proposal here ... how romantic!! 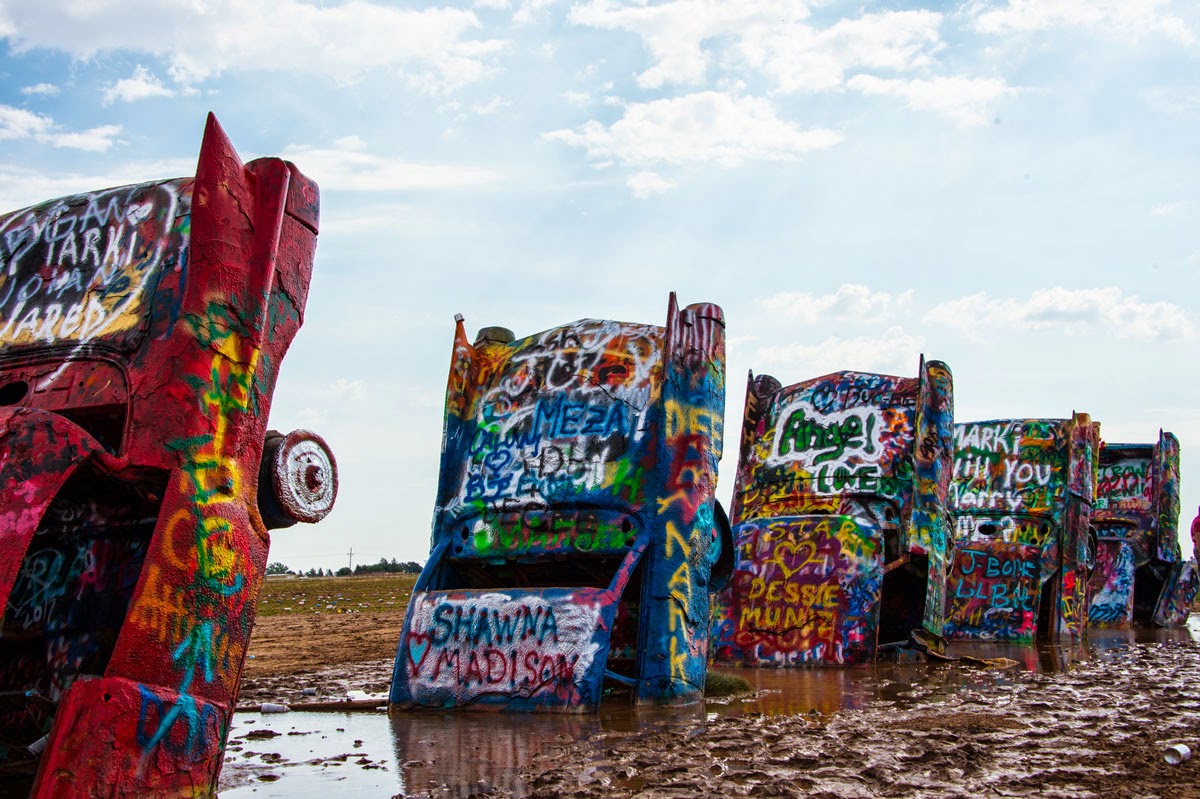 One last stop in Amarillo ... upon a recommendation from Nick Russell of Gypsy Journal fame, we stopped at this lovely restaurant called Coyote Bluff Cafe.  Normally, you would just drive right by ... but don't!!  By 11:15 the place was packed with no empty seats (they open at 11:00 am). 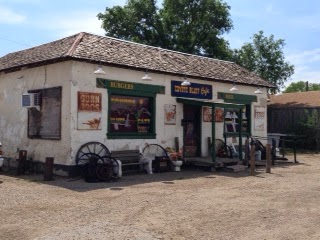 Luckily, we got one of the last tables and were able to chow down on this Bacon Cheeseburger fit for a King!!  Dan Chance ... you're gonna LOVE this one.  Crispy on the outside, cooked perfectly medium on the inside, this half pound of beef was the best I've ever had!!  Covered in melted cheese and three huge pieces of smoked bacon, it was over 4 inches tall!!!  Served on your choice of roll it was a feast!!  Their french fries are better than McDonalds!!!  Barbara had buffalo chicken wings that were HUGE, with just the right amount of spicy hot!! 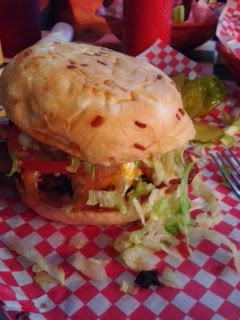 So full I know I won't eat dinner, we packed up the rigs and headed off to Kansas, passing by the many oil rigs dotting the countryside.  No wonder there are rich farmers here ... they all own Texas Tea ... oil that is!!! 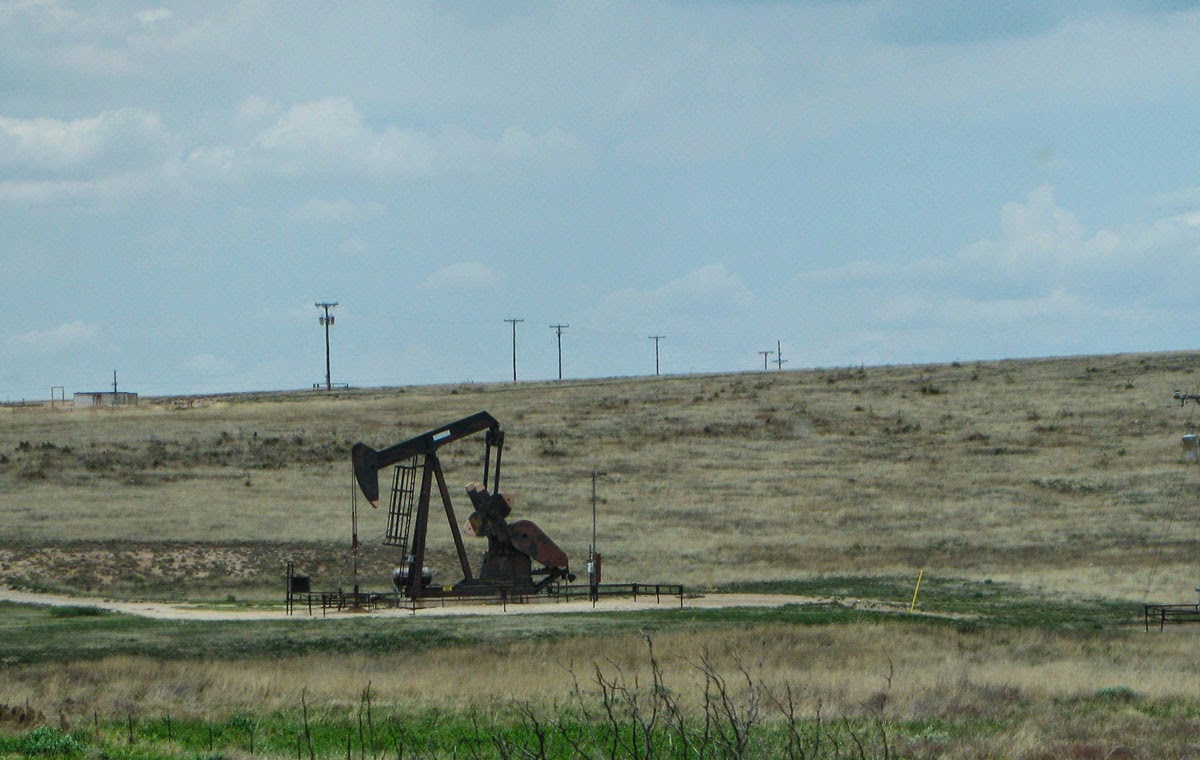 It was a pretty uneventful drive ... the road is straight and goes on for miles!!  No sign of any mountains around here, just a few rolling hills when you cross a wash.  One thing you WILL find here on the Texas Oklahoma border is the biggest silos I've seen in my life. 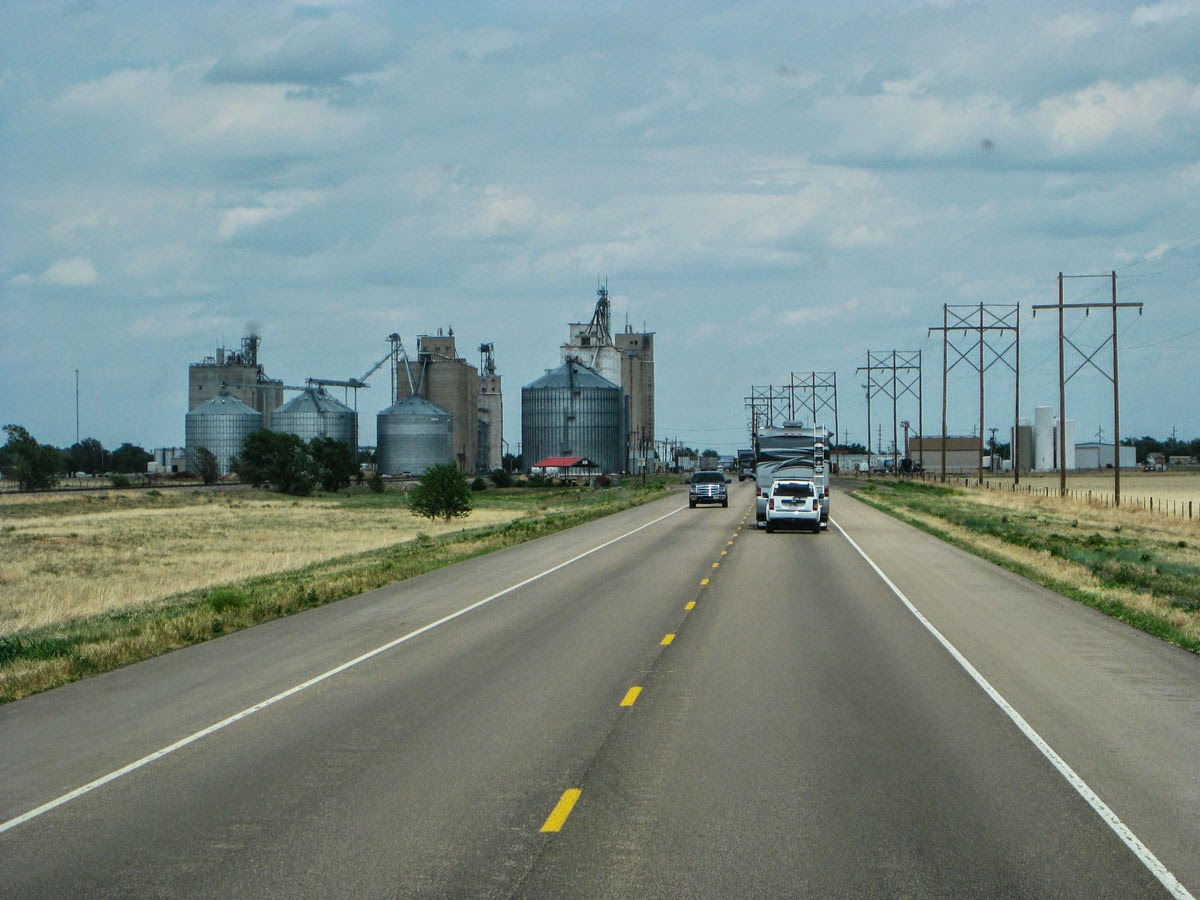 Wheat is the big crop here and it appears the farmers all bring their crops to these centrally located skyscrapers!! 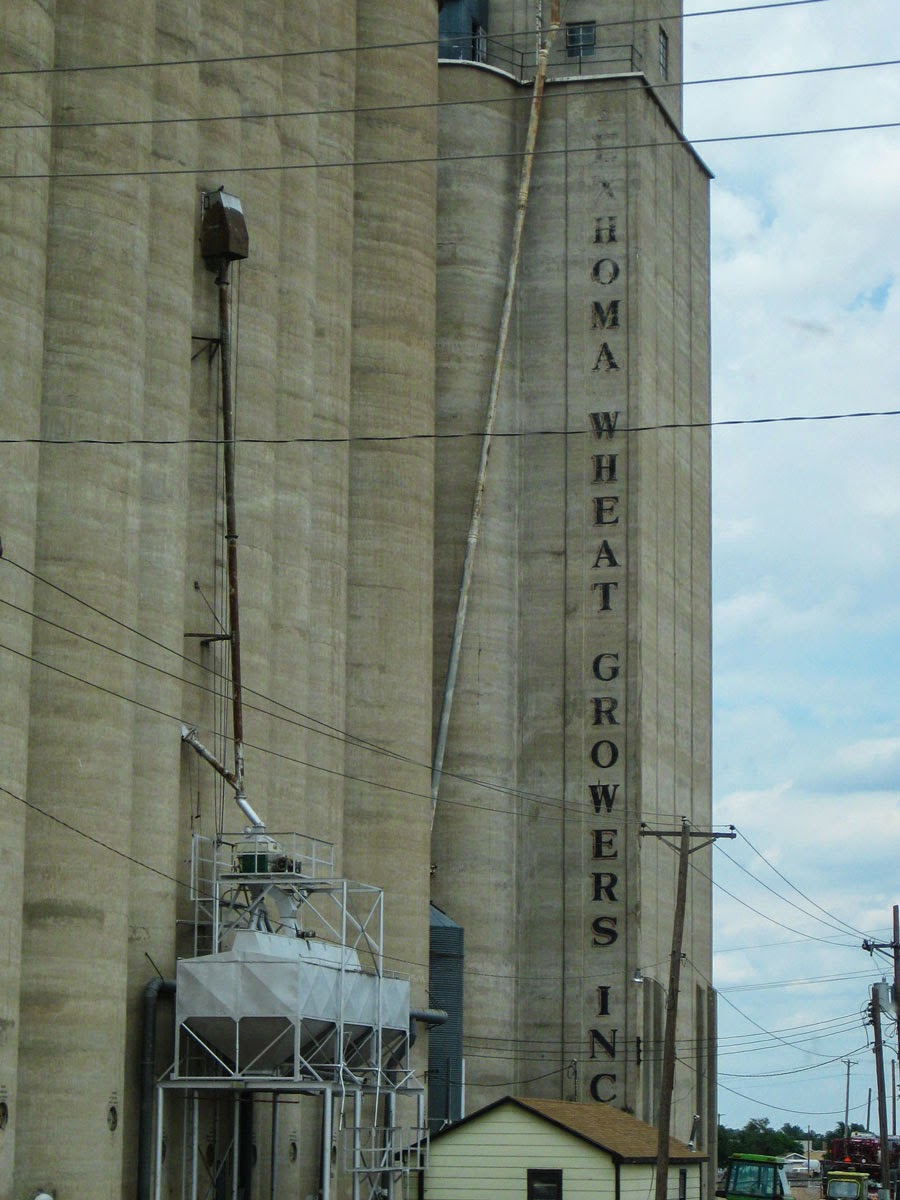 Finally we officially crossed into Oklahoma when we passed this tiny sign. 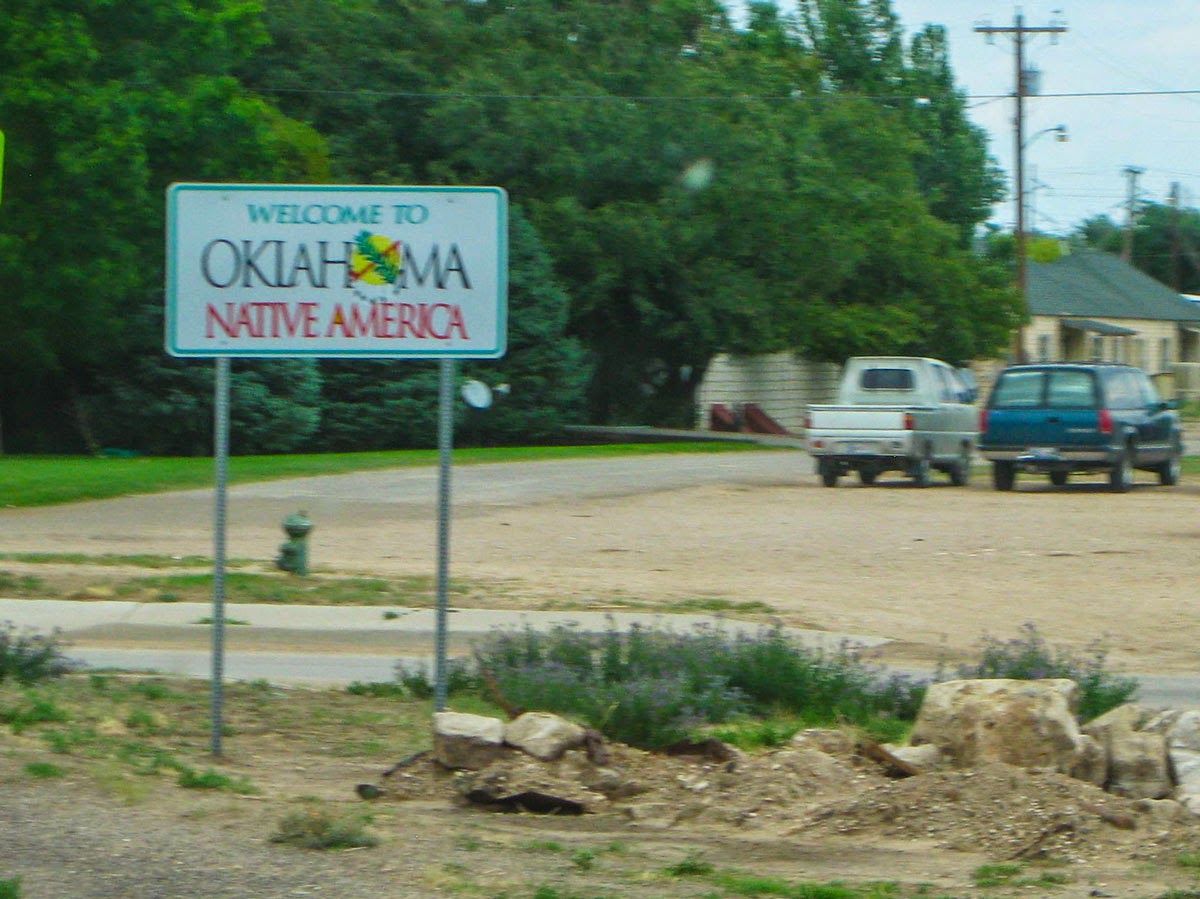 Wow!!  THIS is big blue sky country ... except for those clouds.  Again we have been told that this area is starving for rain ... well just wait a little longer, because it's following us everywhere we go!!  Heard of amber waves of grain??  It's here on the prairies in Oklahoma!! 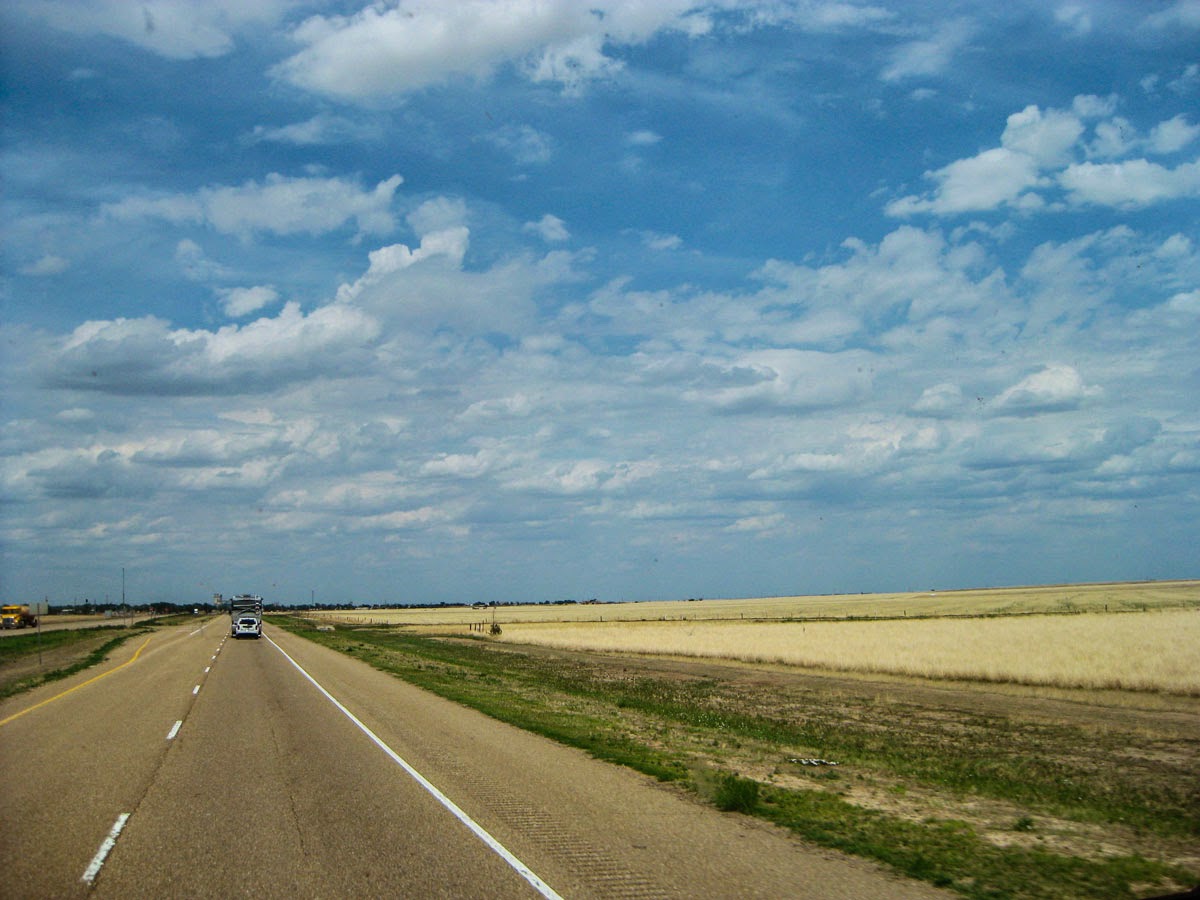 Oh no .... we definitely are in Kansas now!!  I'm beginning to get a little more worried as we pull into Liberal Kansas, home of Dorothy and Toto!!  Hmmmm it looks like a regular town, but all the houses are made of brick!!  Barbara pipes up ... "that's because they have tornados here!!".  Yikes!!!!! 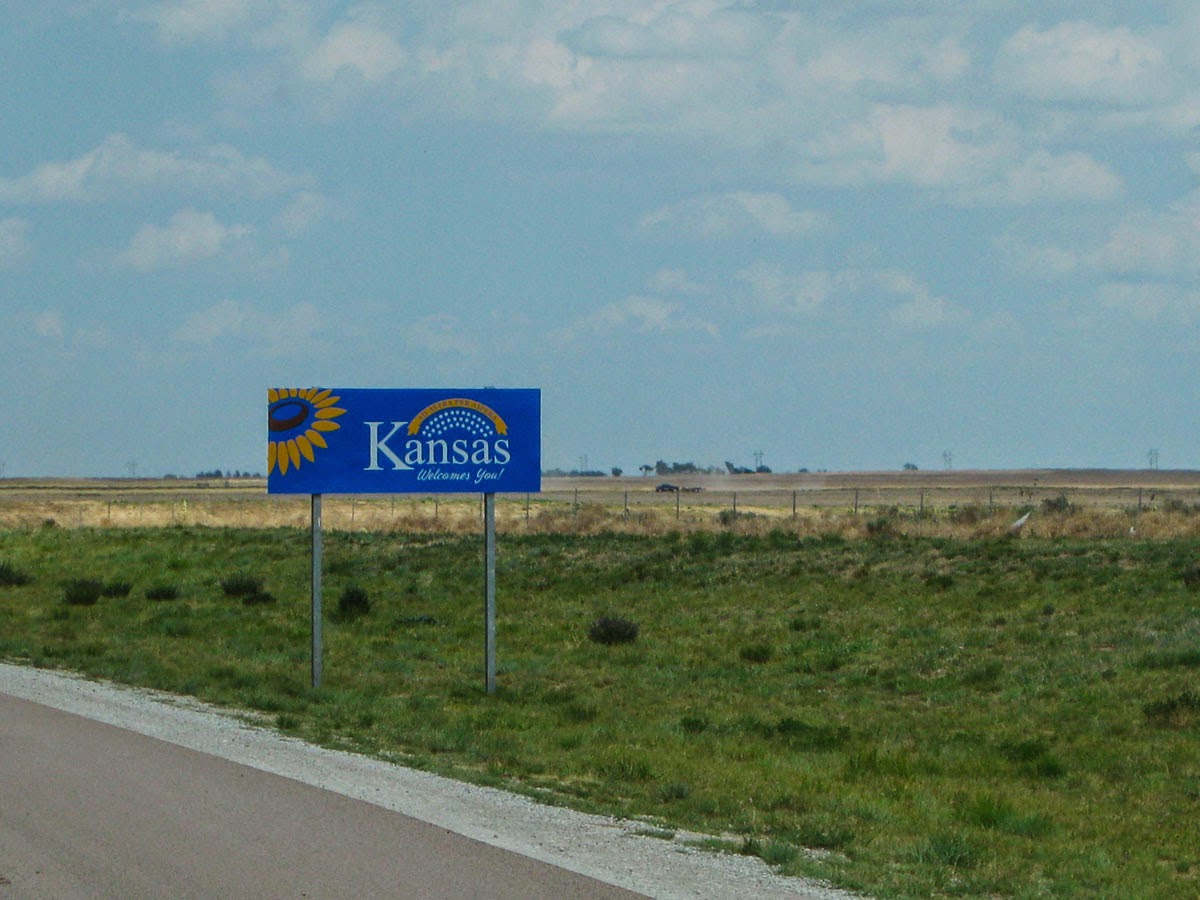 I'm trying to appear calm until she mentions it's worse in Wichita and not to worry, you can always see them coming!!!  I thought that burger might give me a heart attack, but now I'm SURE it will be the weather in Kansas!!   As I mentioned, the rain follows us everywhere, and at midnight, right on schedule, it started to come down.  It's not a downpour ... yet ... just a nice make-the-lawn-green drizzle.  This morning we head out for the five hour drive to Wichita.  Keep your fingers crossed for us and pray for SUNSHINE!!!

Posted by Nancy Kissack at 5:20 AM