Holy cow Toto!!!!  Last night was scary and awesome at the same time, although more scary I think! My dogs thought so too!!  The day started out nice enough ... blue sky with a few clouds.  Here's the RV park with just the two of us staying for the weekend. 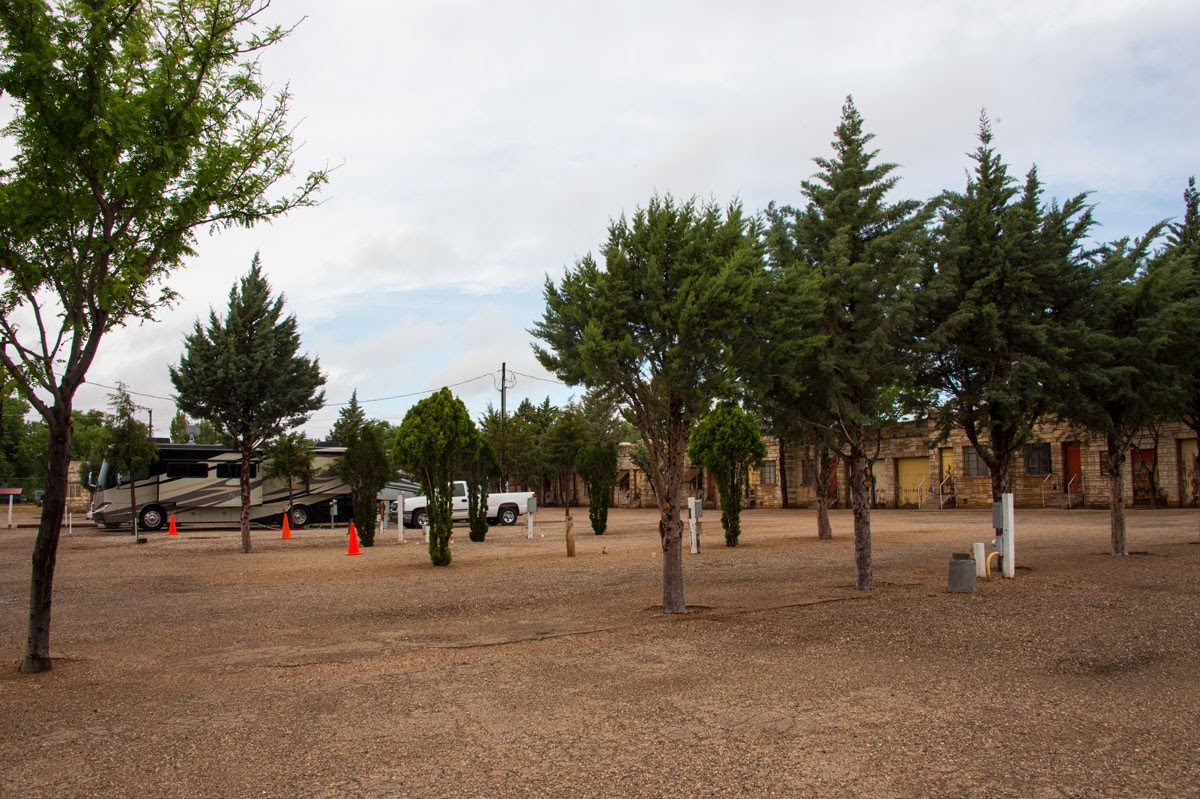 I walked around the area with my camera, hoping to get a few more shots. 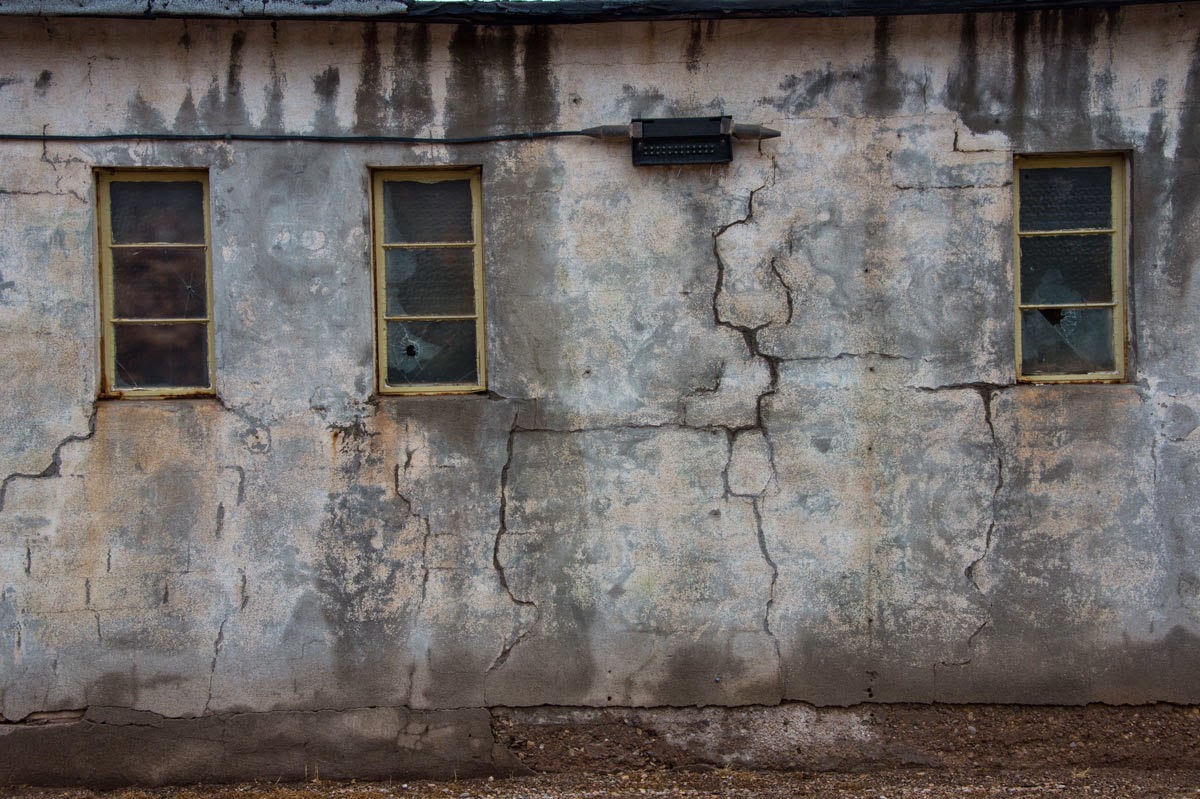 I can easily imagine how it was in it's heyday ... lots of people milling around, old cars in the garages, all on a great adventure like I am! 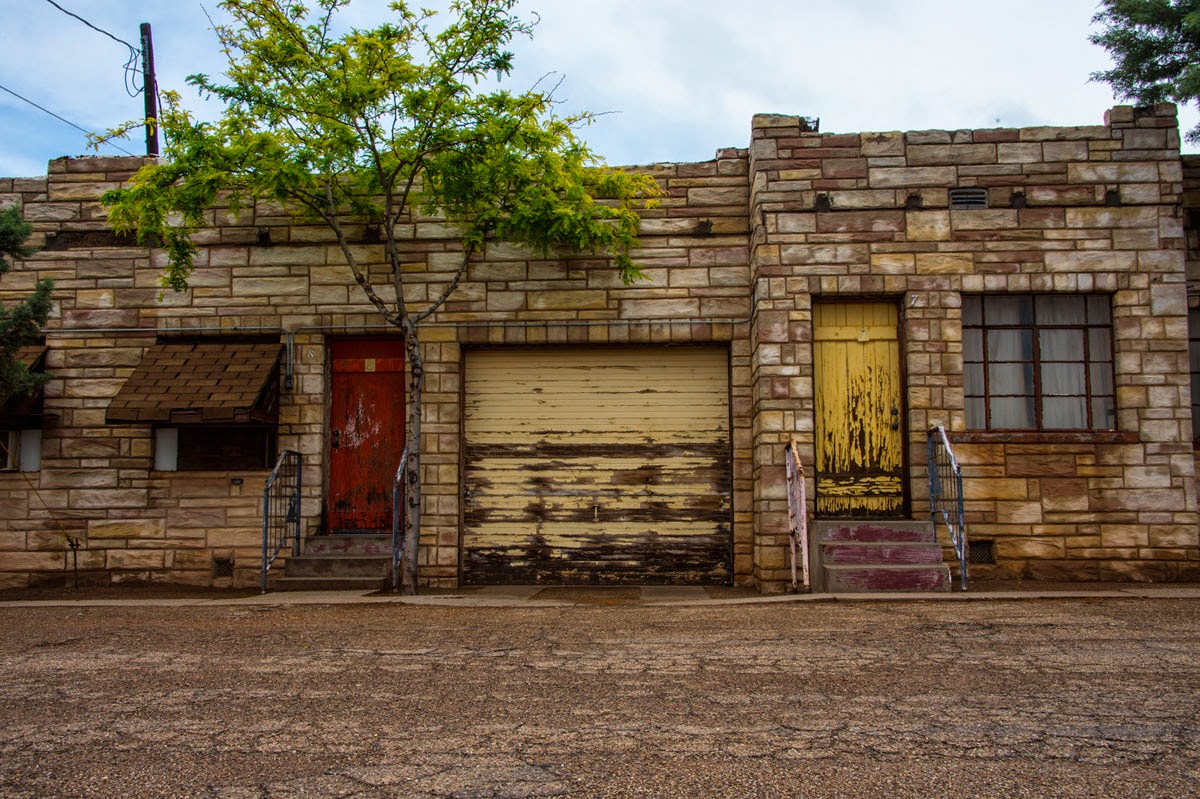 Even the wrought iron hand rails help to create an atmosphere of Mexico and the desert, except THIS hotel had "refrigeration"!! 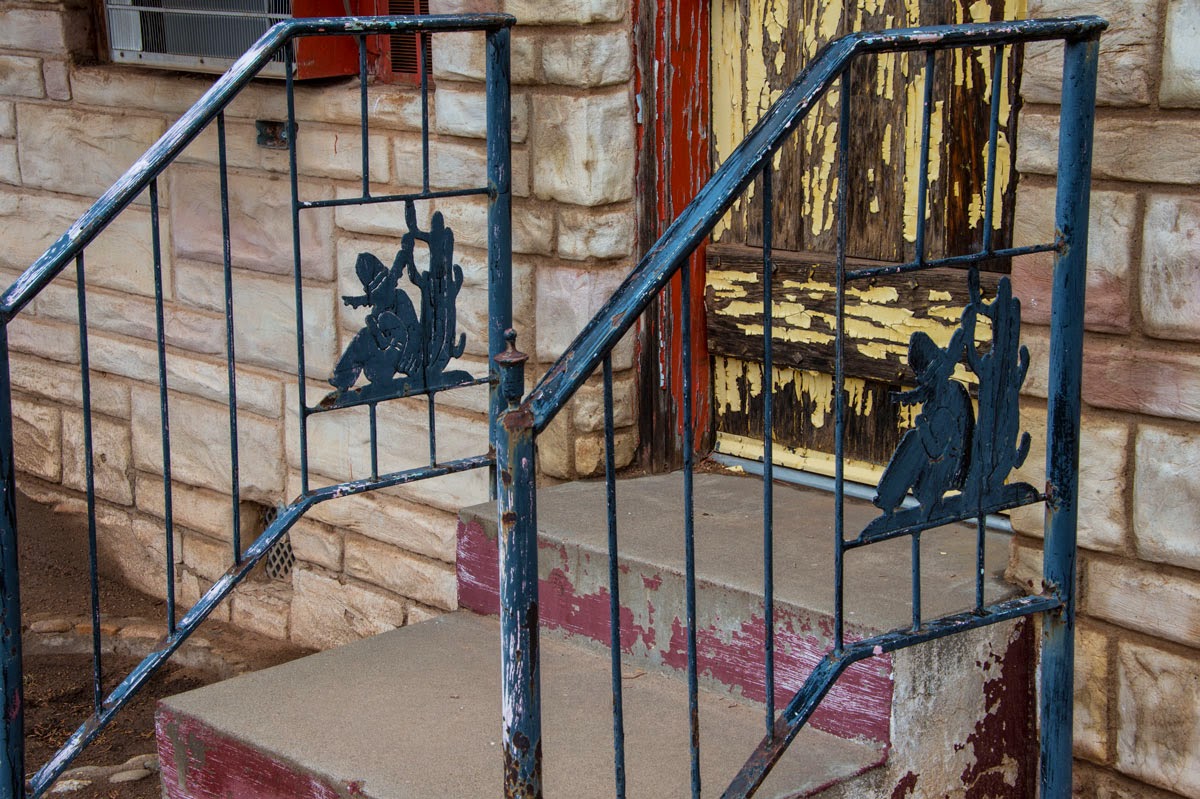 On the back side, many of the windows had bullet holes in them.  The ceilings have long ago collapsed, but it's still a great place for photos.  Two other cars came in while I was walking around, just to take pictures!! 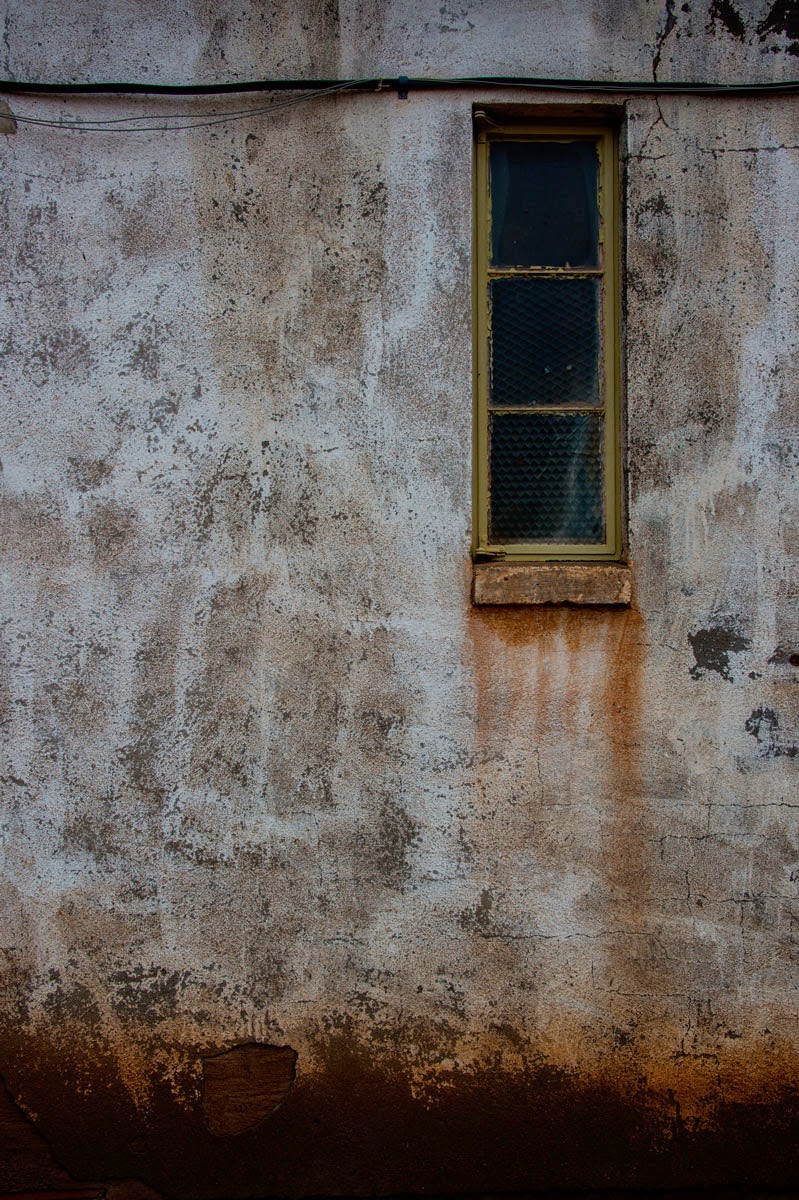 Since it was my birthday, we went to Tucumcari Ranch Supply for breakfast.  Yessirree ... best apple fritters around, and home blended coffee!!  From there up to Logan for a thrift shop run, where I found a beautiful punctured-tin, red tiled mirror for my birthday present.  When we stopped by Richard and Francis' house for directions,  they brought out a piece of homemade apple pie with a candle and sang for me!!  I'm telling you, the people are sooooo friendly, it makes you want to set up house here!! 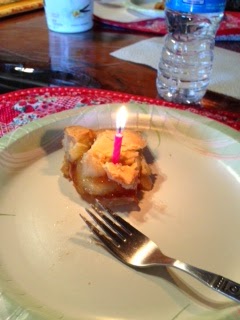 About this time, I check my phone for the weather.  I've downloaded the WeatherBug app to my I-Phone (which took about 6 hours .. no AT&T towers here) and there's a storm coming on the radar.  There was this little triangle thing in the corner, which I wish I hadn't touched!  THAT was the warning notification button ... and there were TWO!!!  Severe Storm Warning and TORNADO WATCH!!!  Are we in KANSAS???  New Mexico doesn't have tornados!!!  Well apparently they do because our County was on the list!!  I'm thinking we should get the heck out of Dodge, but Barbara and Tom say they've gone through this before and it's no big deal.  We'll get a WARNING if it's necessary to find a basement.

I'm sitting on the edge of my seat, checking my phone every 5 minutes, as we arrived at Russell's Travel Center, East of Tucumcari on Hwy 40.  He has a great collection of cars, fuel pumps and "stuff"! 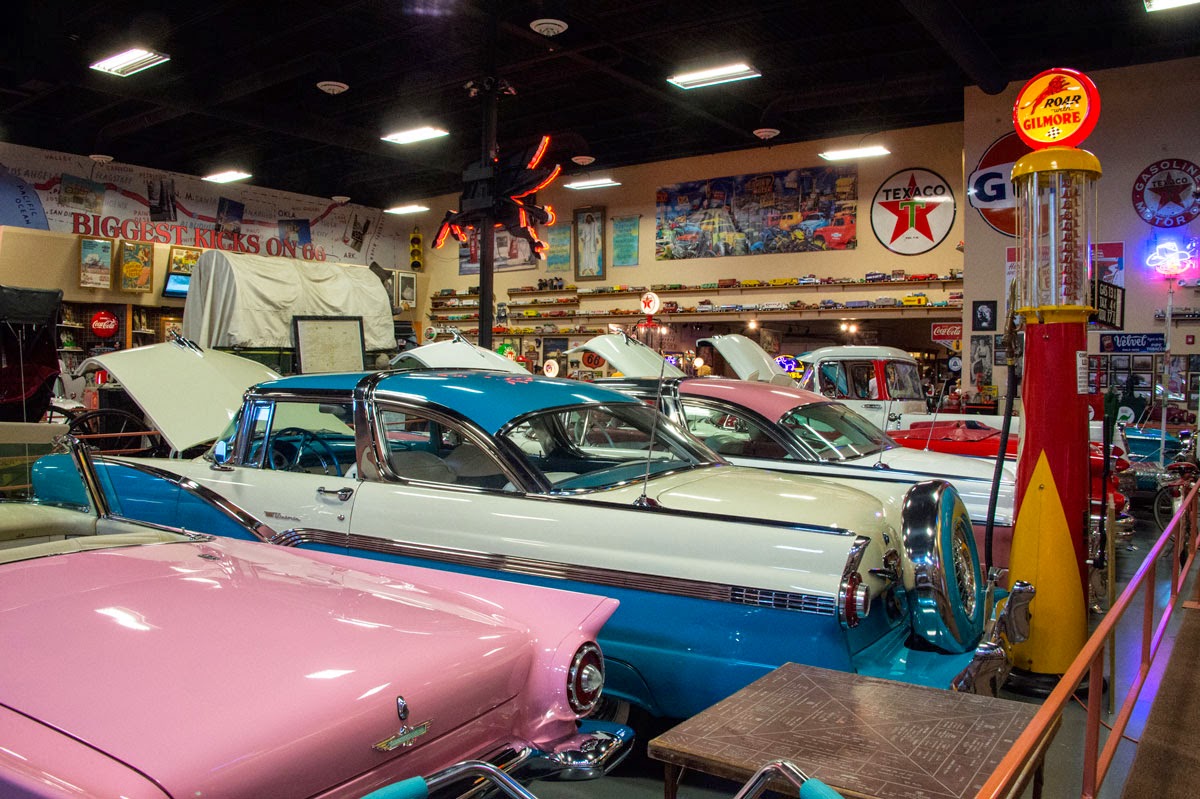 Nice little pink Thunderbird, along with several Fords and Chevys from the 50's. 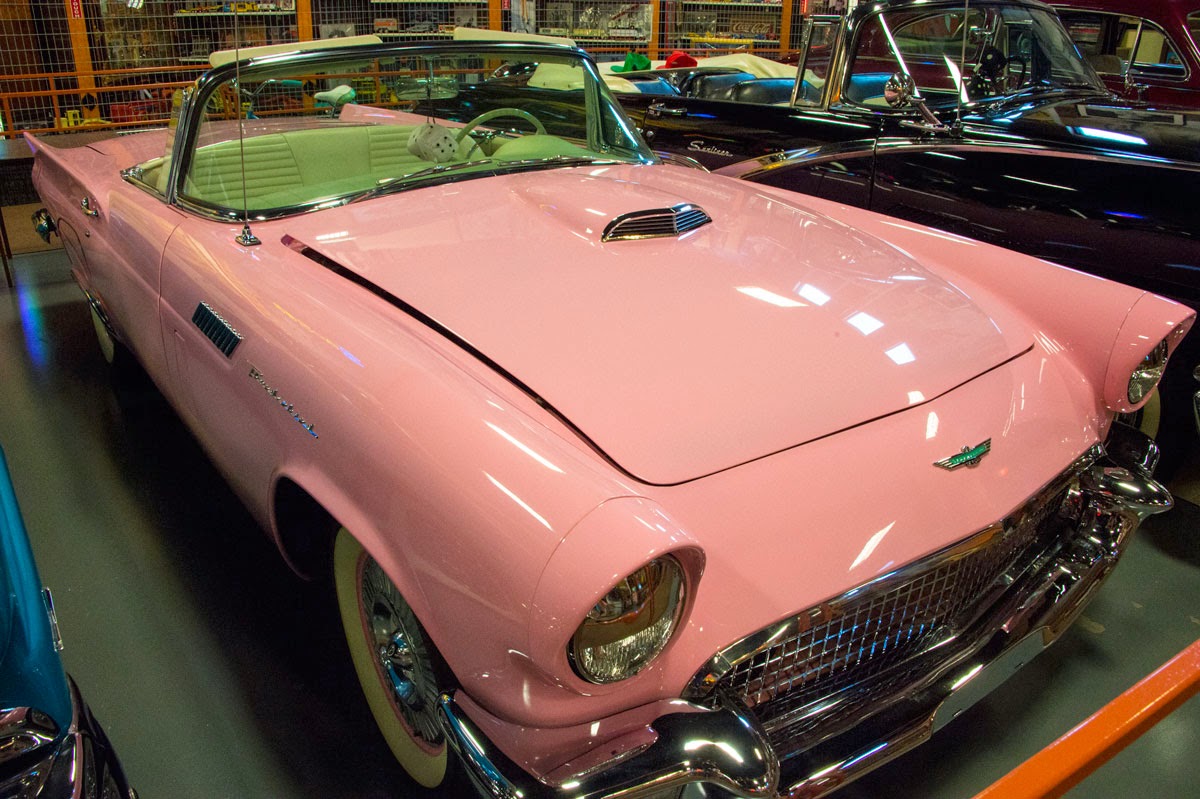 Cool little Hemi here ... doesn't look like it's ever been on the road!! 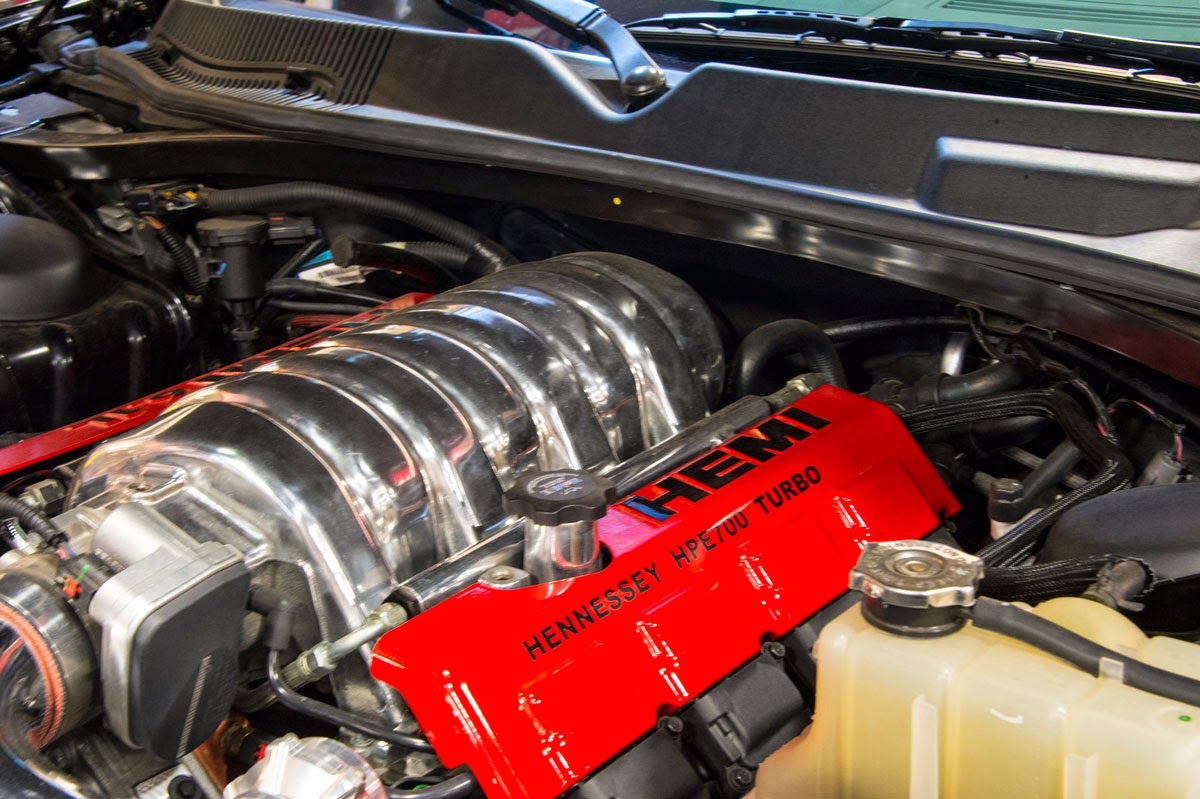 He seems to have a thing for Marilyn and Elvis, as tons of images adorn the walls, as well as life-size mannequins.  Mr. Russell was actually in the building ... so stop in and say hello.  There is no charge and you can take all the pictures you want ... just don't touch!! 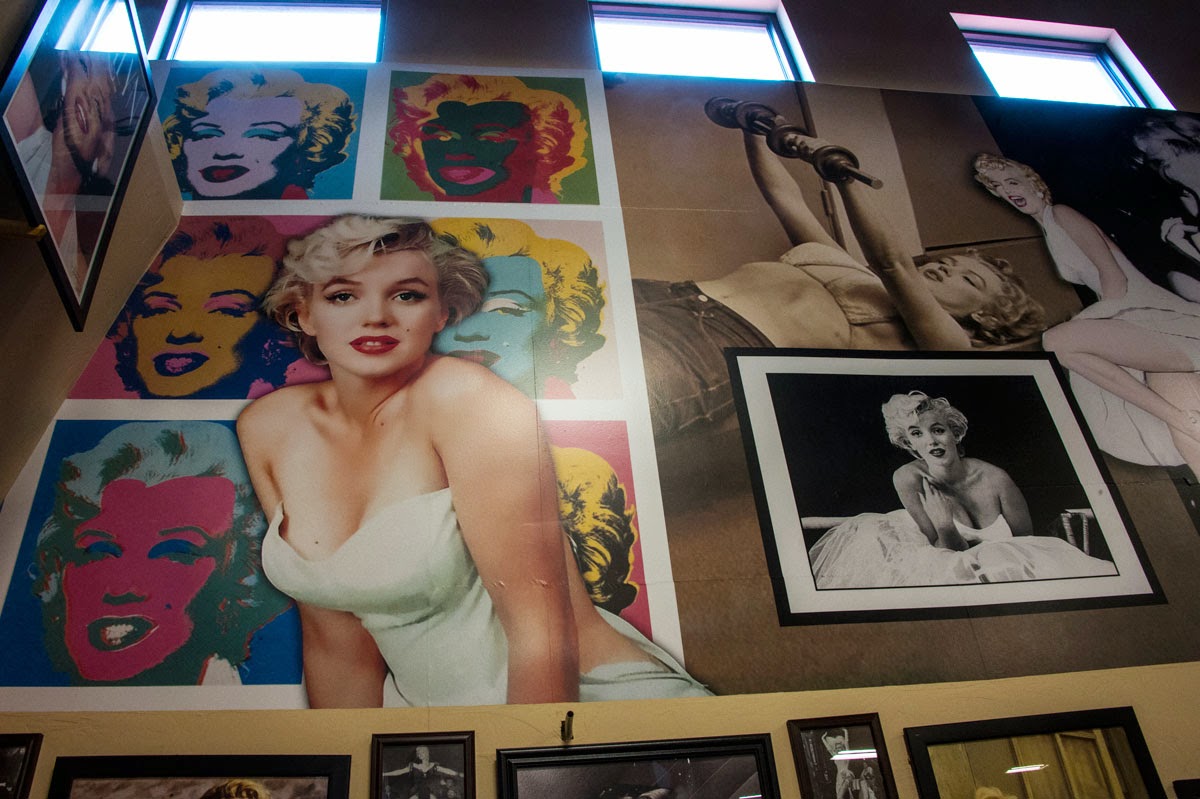 This Shelby looks like it just came off the factory line!! 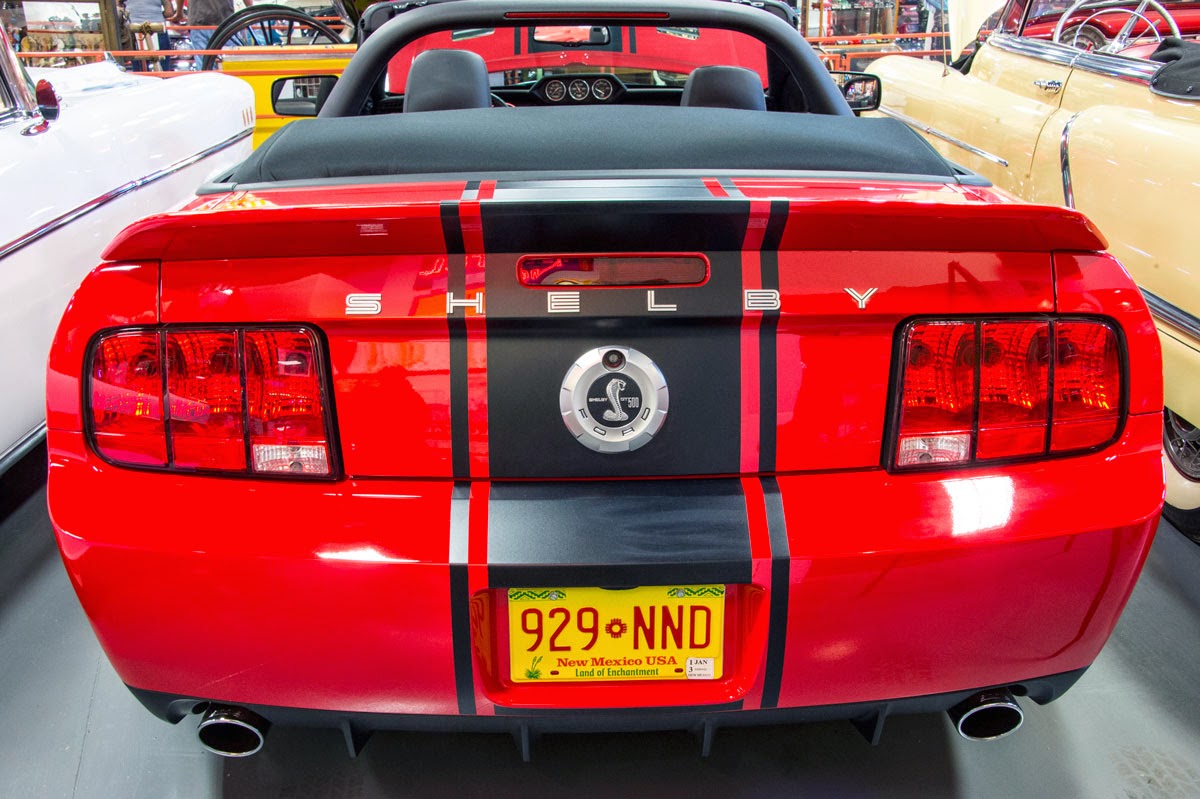 We rolled back in to the RV park about 4:00 in time to feed the puppies and reload the map six times!!  At 6:00 when we went to dinner at Dell's (just down the street), it looked like this!!  Now THIS is a storm rolling in!!  Dells has GREAT food and a nice soup/salad bar.  The prices are reasonable and the staff very friendly!!  It's a must stop!!    But really, I'm getting worried about the storm!! 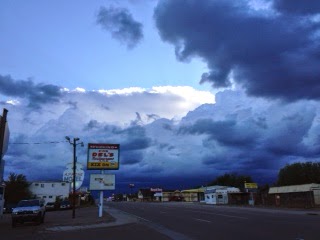 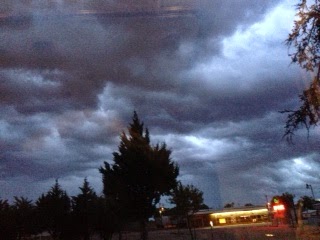 By now, the map has several big yellow/red spots on it and it's coming right at us.  Against my better judgement, I hit that little triangle again ... ANOTHER WARNING ... 50 mph winds and 1/2" hail!!!  Eeeeeeeeeek!!!  Well, that's not exactly what I said, but it's close!!  Geez ... is my insurance up to date??  As the rain and hail started to fall, the sun went down, causing this weird sky.  This is taken through the rainy window ... there's so much lightning, I'm afraid to go outside!!!  I start gathering up my stuff for the tornado shelter ... except there isn't one!!!  The best we can do is the Elks concrete building. 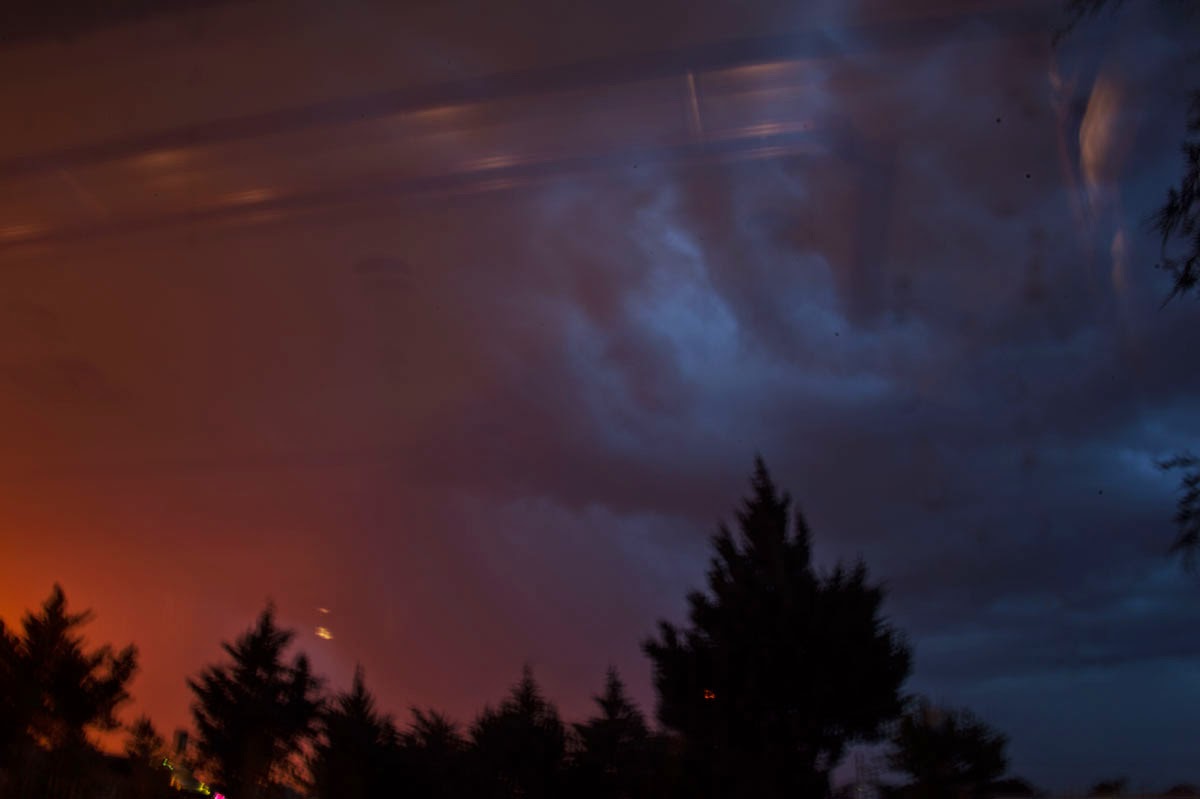 My poor puppies are literally shaking in their beds as the hail started on the roof, but thankfully it never got to the half inch stage.  I finally opened the window and got my camera out ... just to see if I could catch some lightning.  It's pitch black out and the camera is set on Manual Mode with me controlling the length of time the shutter is open ... which is why some sky is blue, some kind of purple. 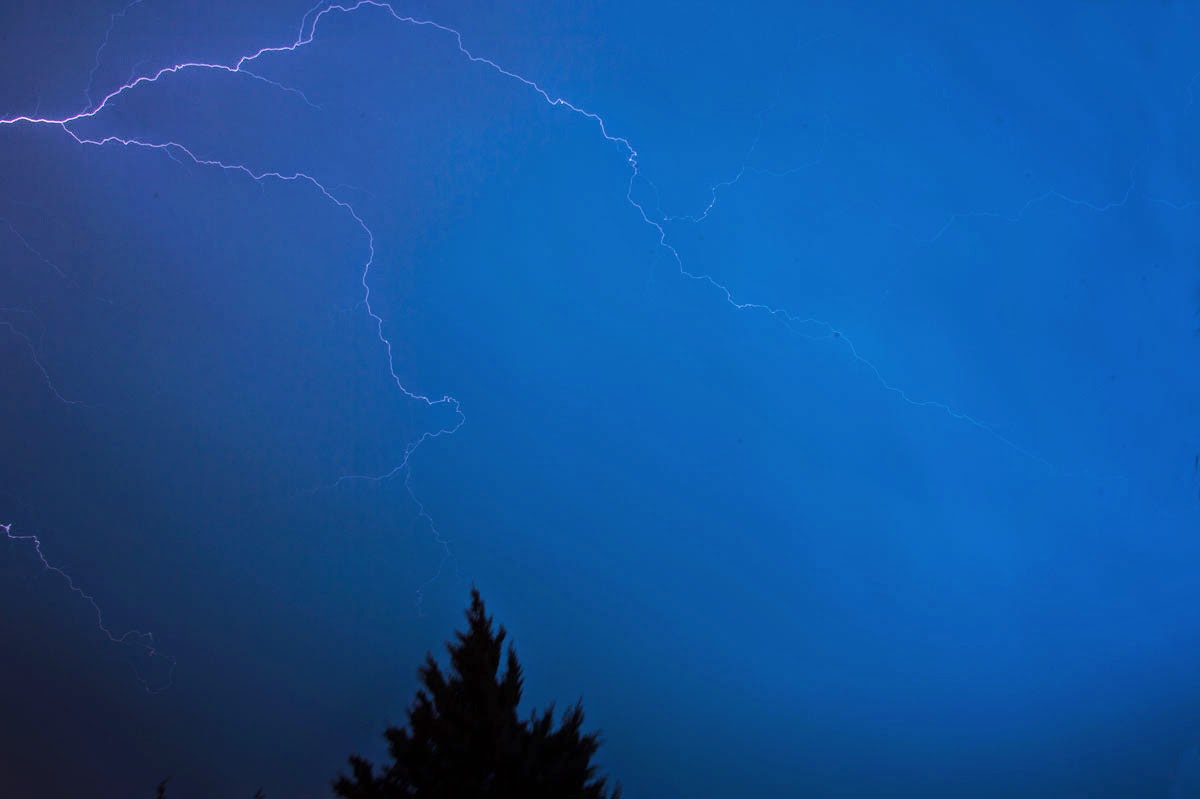 With that kind of setting, you can't look through the eyepiece.  You just kind of point and shoot!!  The  loud thunder and brilliant strikes of lightning put on an amazing show ... all the while I had my phone on one side and my packed bag on the other!!  This is one experience I don't recommend!!! 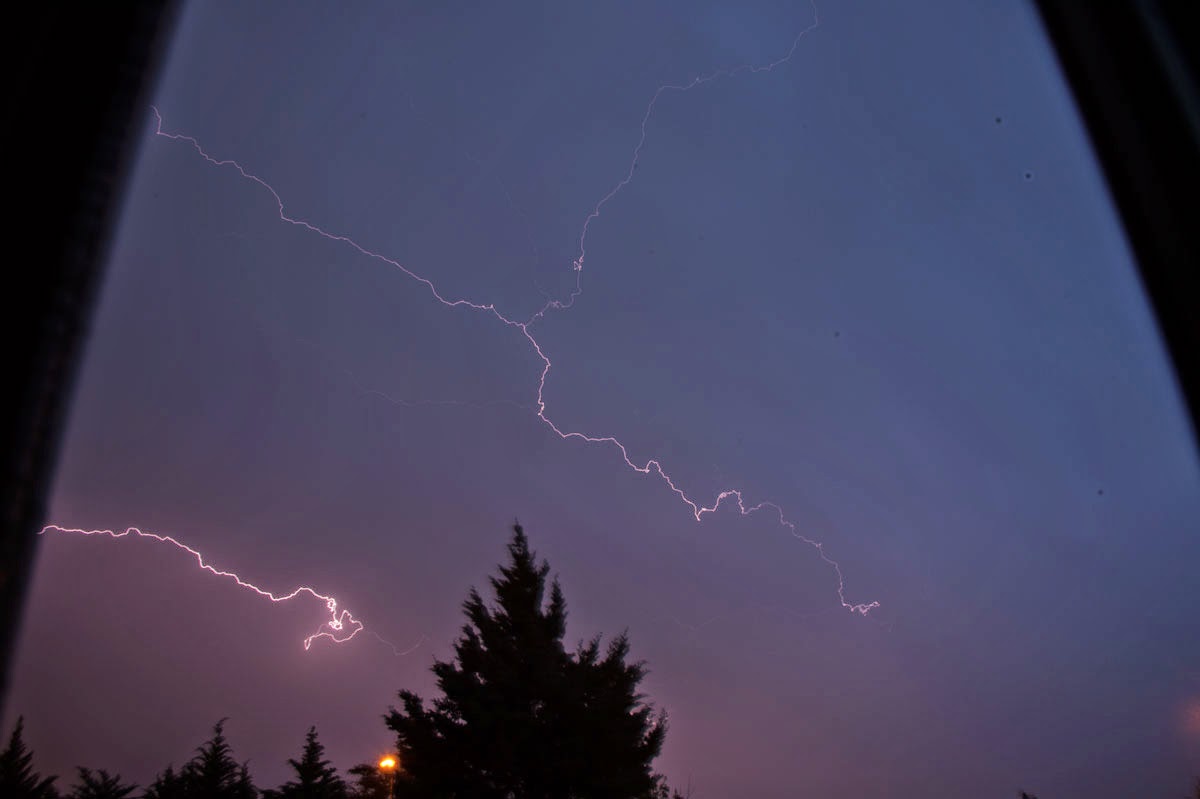 Pretty amazing and SCARY!!!  I even hooked up to the park's cable TV (which was no help at all) and put my Satellite down on the rig.  No use taking a chance on getting zapped!!! 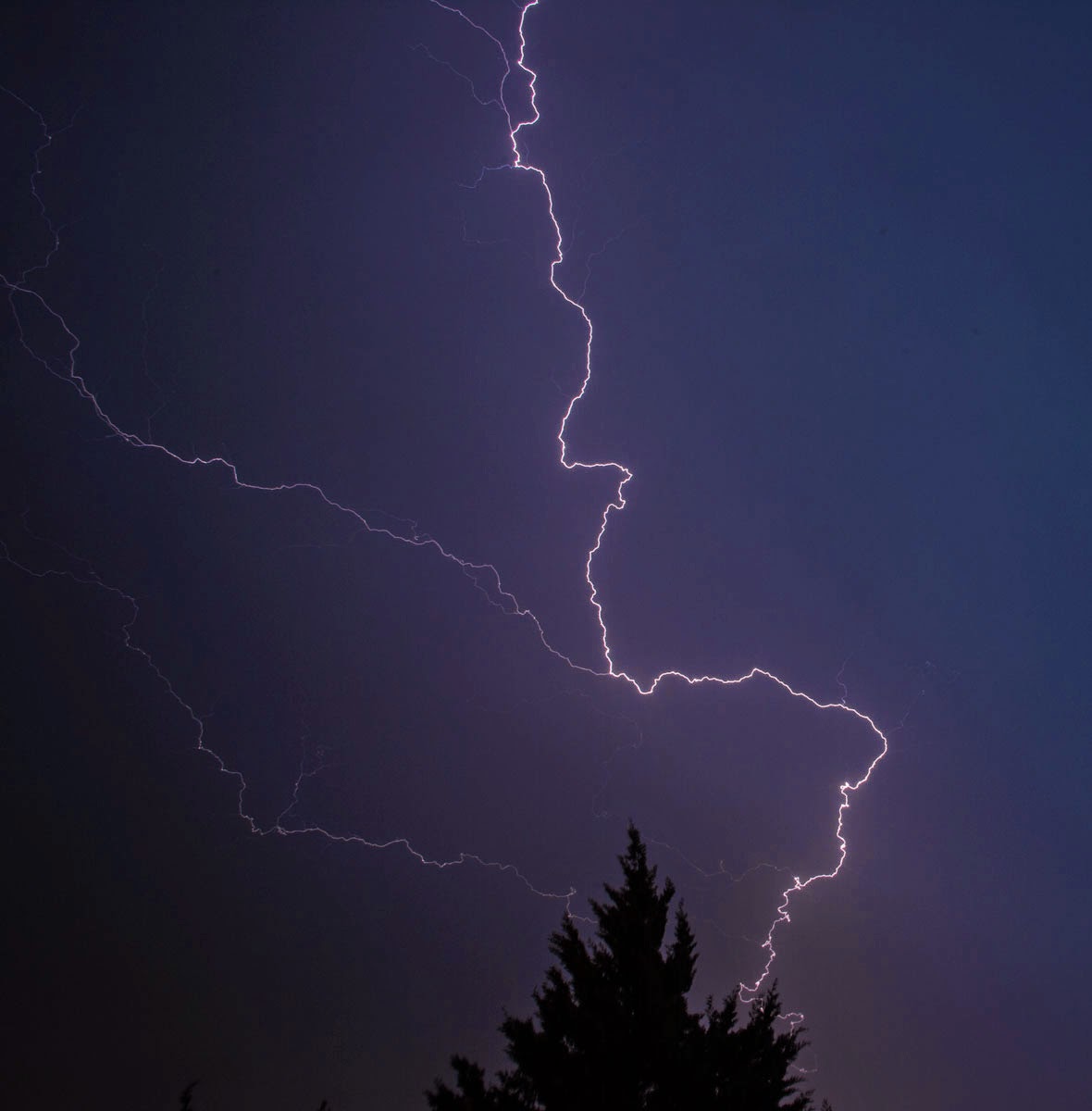 It poured for about 30 minutes, turning our parking lot into a lake, then finally began to dissipate.  It rained off and on until the storm passed.  WHEW!!!!  I breathed a BIG sign of relief, as did my puppies!!!  Today it's blue sky all the way ... but more storms are heading our way tomorrow.  I'm not sure I can take too much more of THIS kind of excitement!!! 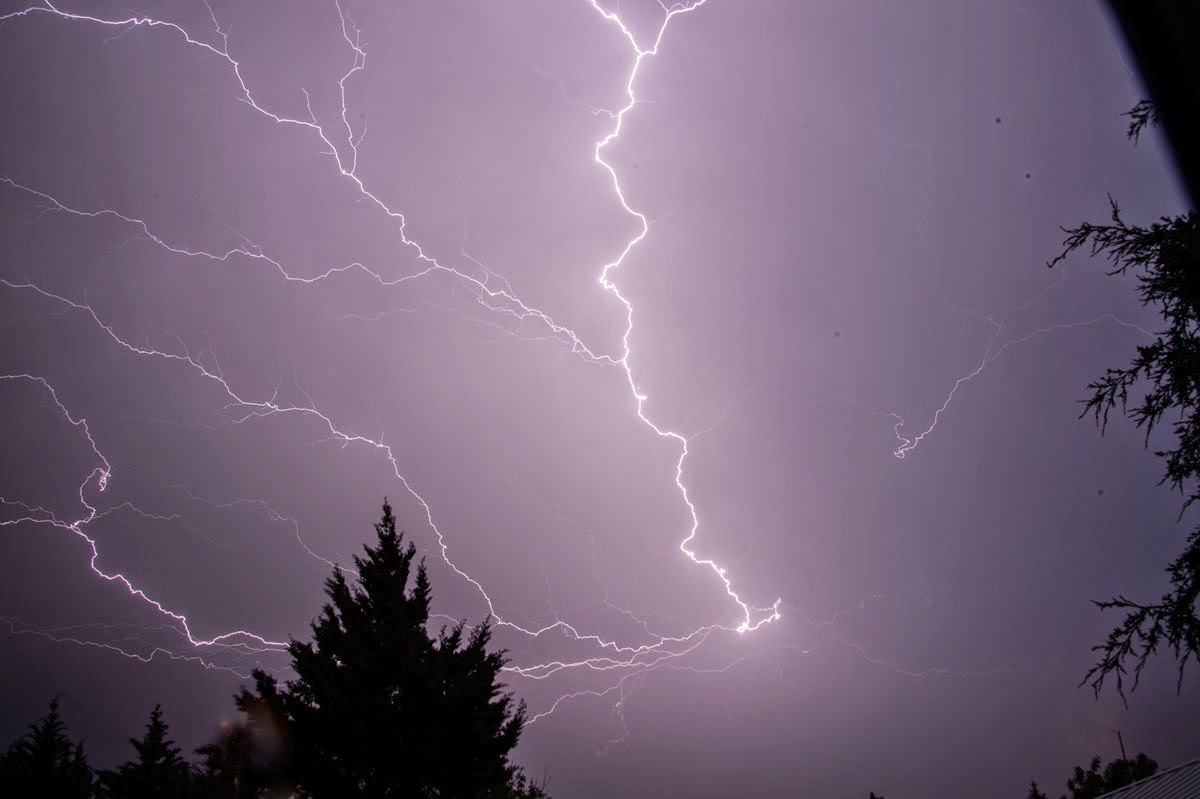