While you're celebrating at the beach with your family or in the backyard with the neighbors, take the time to thank a Veteran for their service.  We wouldn't have the life we do if it wasn't for them!!  Donate your time or a few bucks to one of the organizations that help out our Vets.  It's such a small thing to do for someone who risked their life for us!!  And while you're at it, say a little prayer for those overseas, that they come home to their families safe and sound!!

Even little Tucumcari was celebrating yesterday, with the First Annual Anything That Floats contest at Conchas Lake, a few miles north.  I don't know all the rules ... I'm sure there were rules, don't you think?? ... but you could bring anything (homemade of course) that floated except a boat or canoe, and race to the finish line, for what I don't know.  Bragging rights I guess!!  But who cares if there was a prize ... these people were just having FUN!!

All lined up and ready to go, there was everything from 55 gallon drums to a bathtub!!  See those boats in the distance??  THAT'S how far they had to go and RETURN to win!! 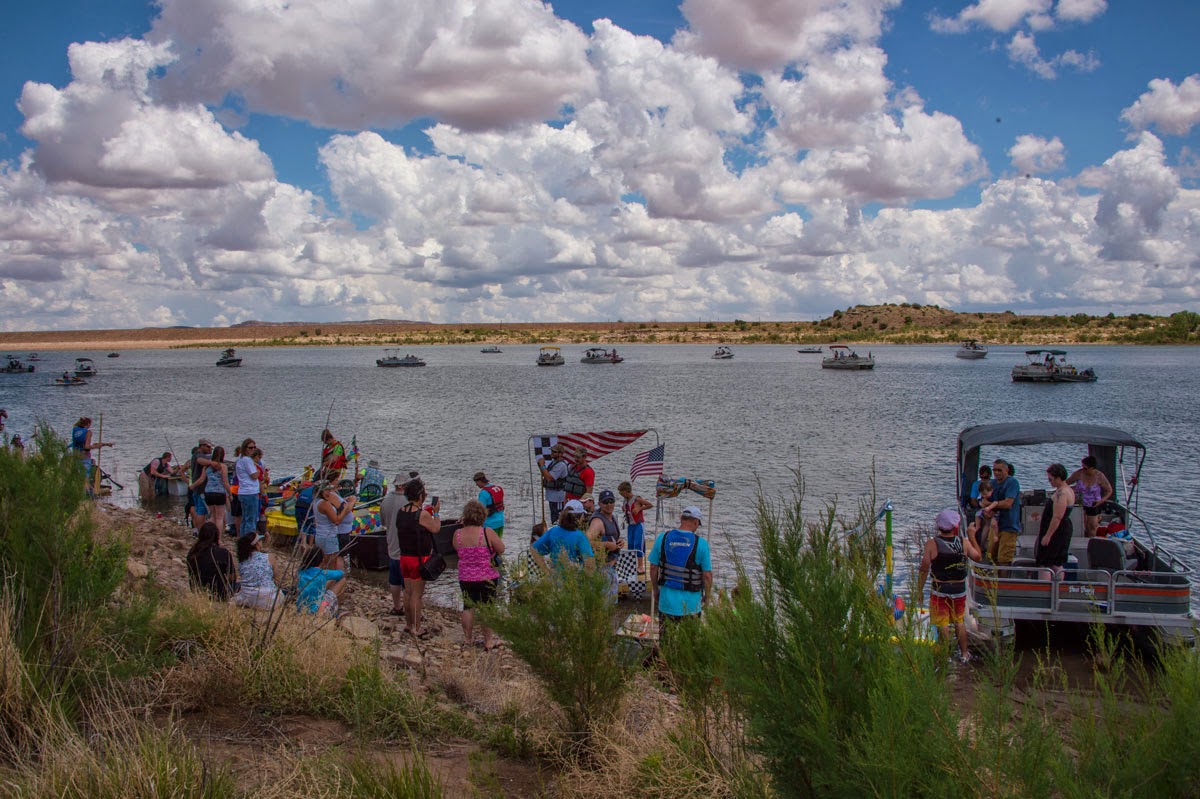 AND THEY'RE OFF!!!  The rig with the flag has a disabled little boy steering up front, locked into the chair, and EVERYONE had life jackets ... even the dog!!!  The REAL boats you see are there to gather up those that sink!! 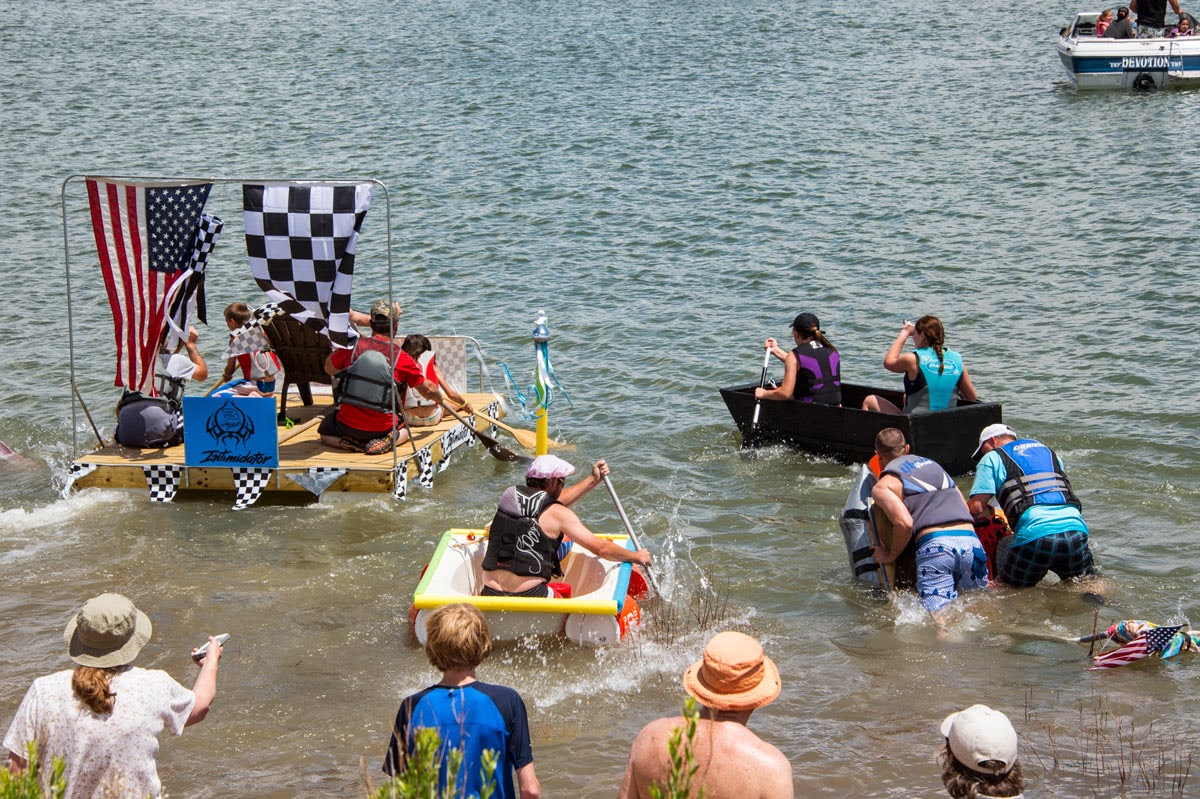 No engines allowed, they paddled like their life depended on it!!  Some seemed to be moving through  the water fast, others not moving an inch.  In fact, the wind was blowing them WAY to the left, so the turnaround line (a rope tied between two boats) moved to the left to accommodate. 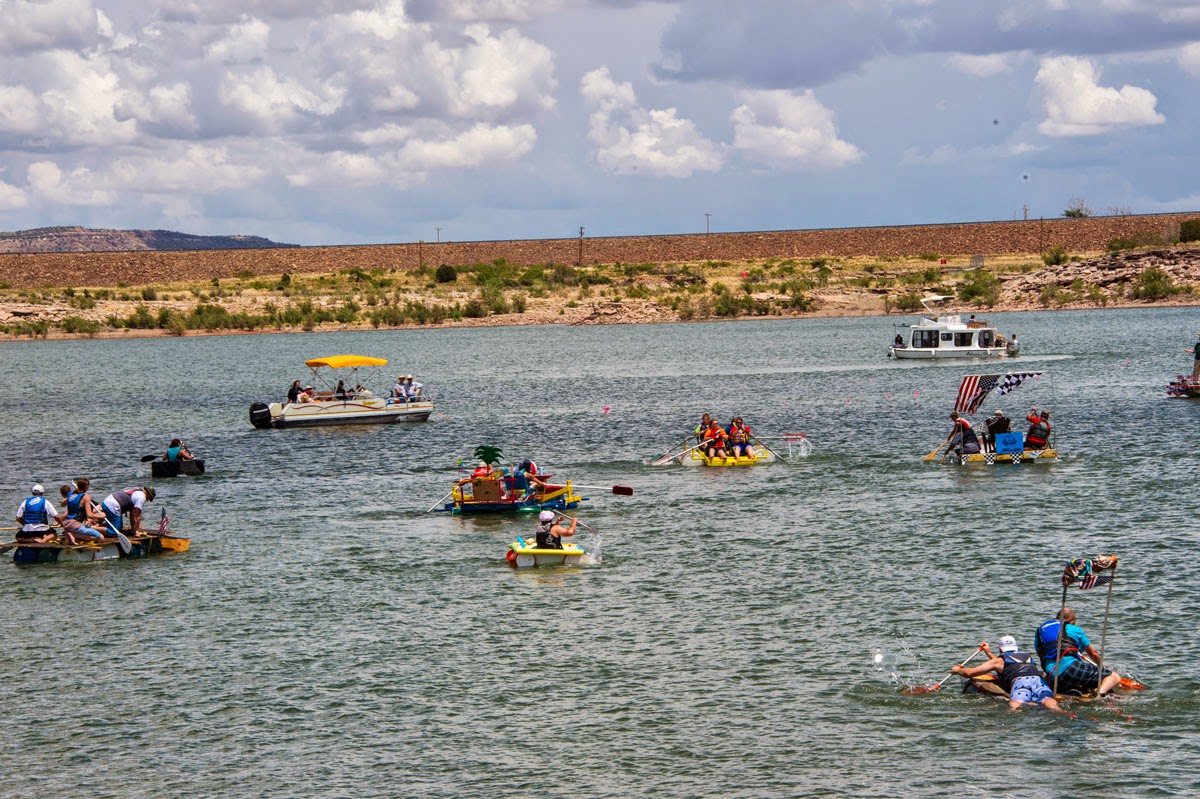 These two guys didn't get far, nor did I expect them to.  While waiting for the race to start, they had to dump out the water that seeped in!!  It's just a sheet of plywood cut up and nailed together with a little paint!!  By the time the chase boat towed them to the shore, they were already thinking of ways to improve for next year!!! 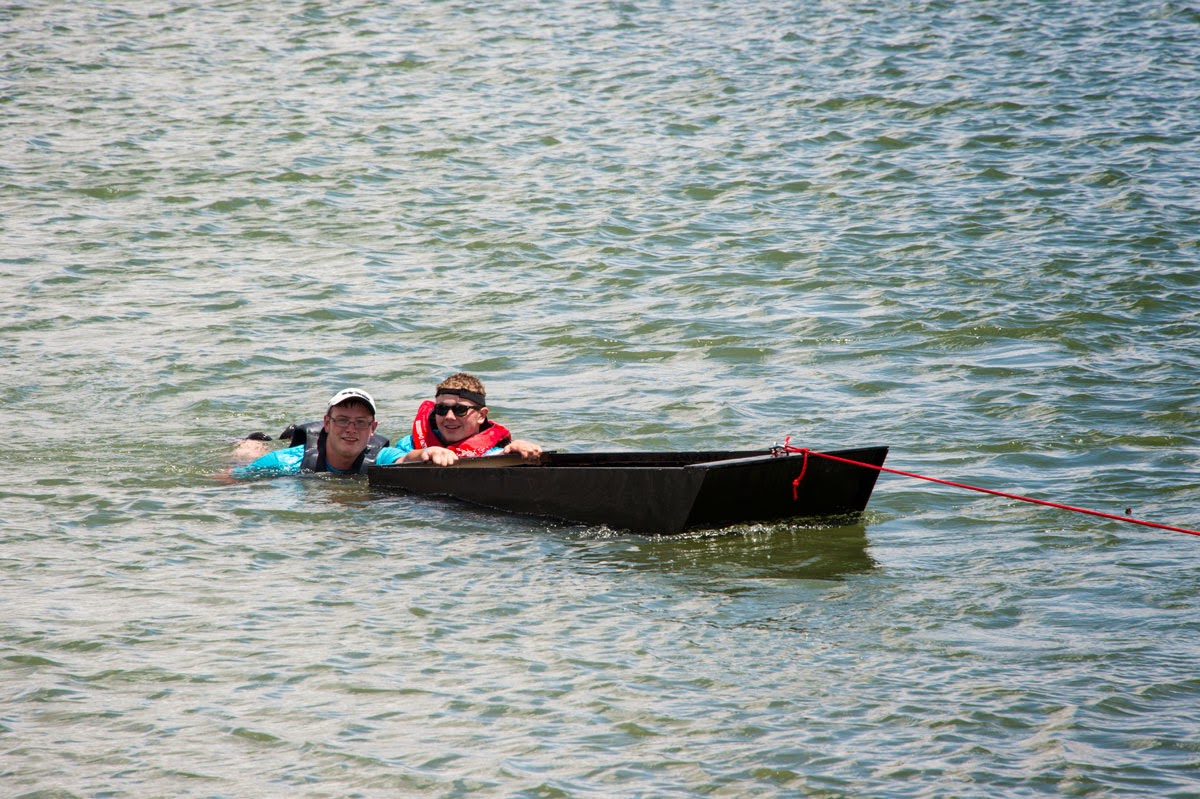 Bathtub boy, complete with shower cap, wasn't very aerodynamic, and paddling seemed to just turn him in a circle, but he never gave up.  He had to stop and bail several times, but he made it to the rope and back ... in about 20 minutes ... and he wasn't LAST!!! 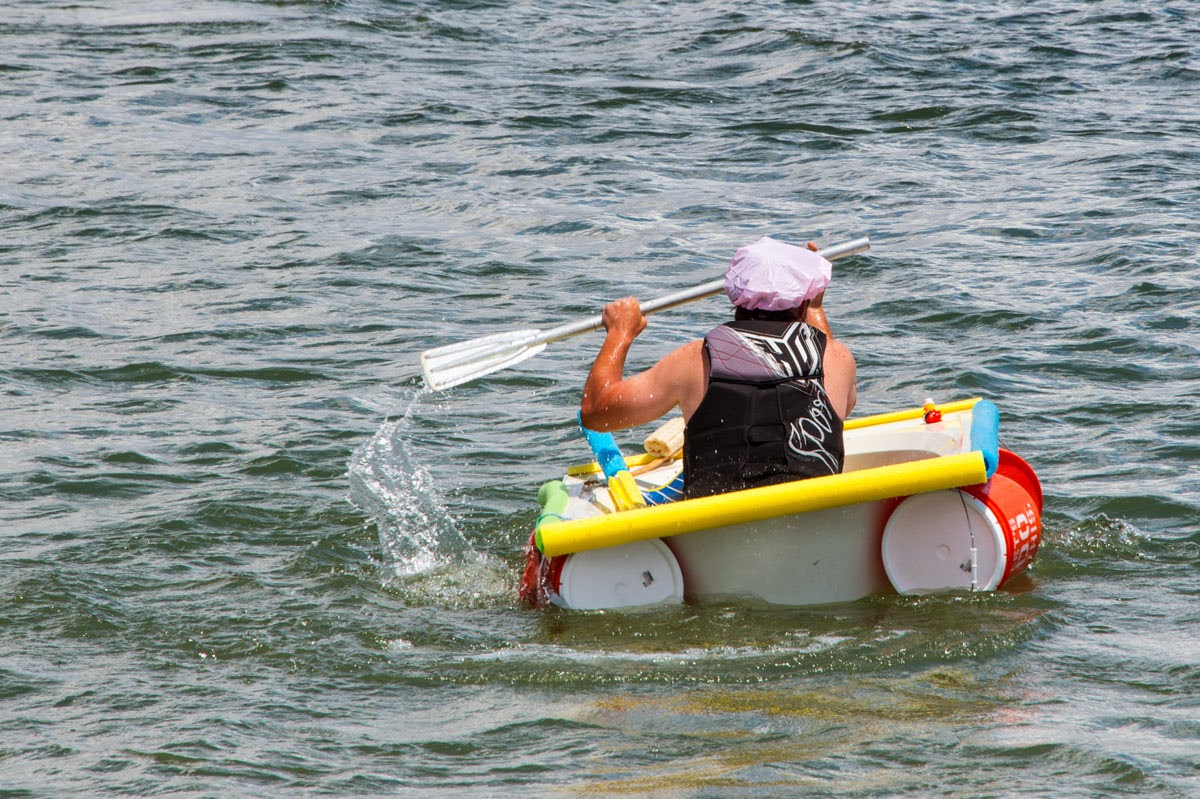 SUNK!!!  But these two didn't give up either.  They turned it over, climbed back on and paddled as best they could.  In the end, they SWAM their boat across the finish line ... one pulling, one pushing!! 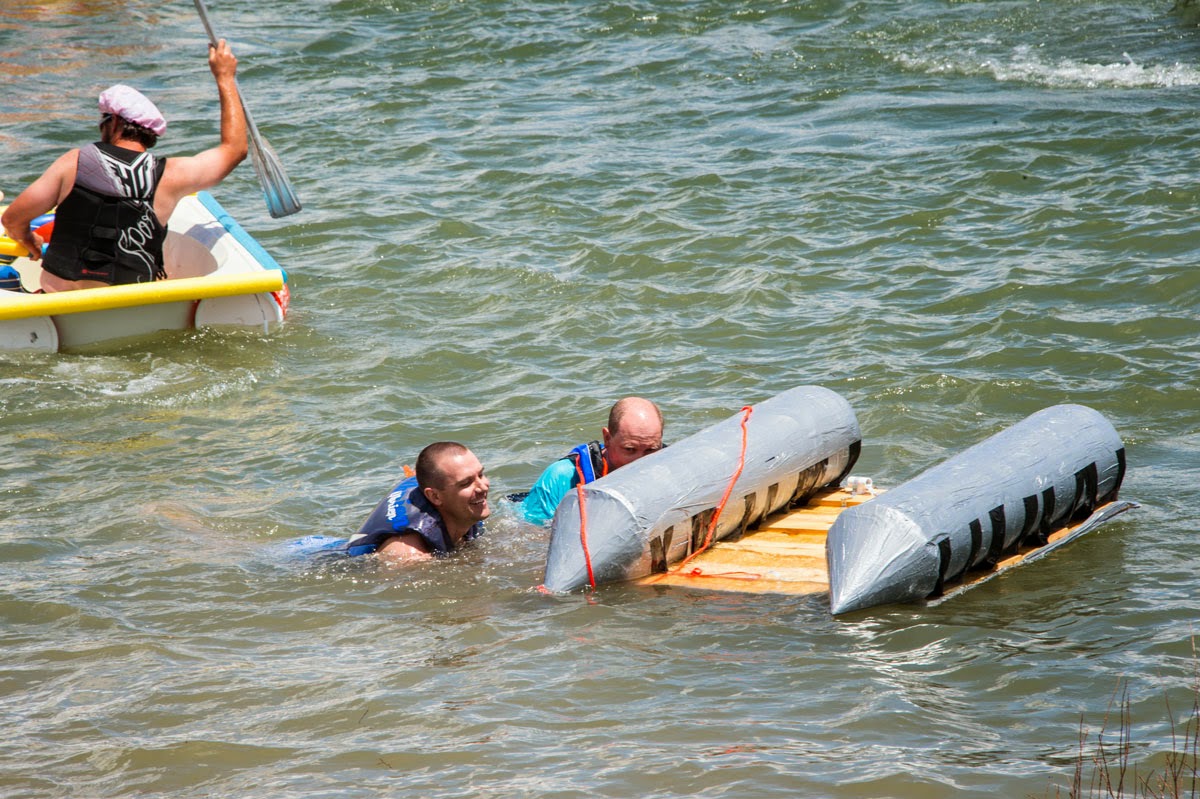 The second race had these two girls in the same black plywood boat as the guys above.  They paddled like their life depended on it and were in a dead heat with Intimidator!!  It was a close race, but the girls WON!!!  Guess that boat doesn't need any tweaking after all!!! 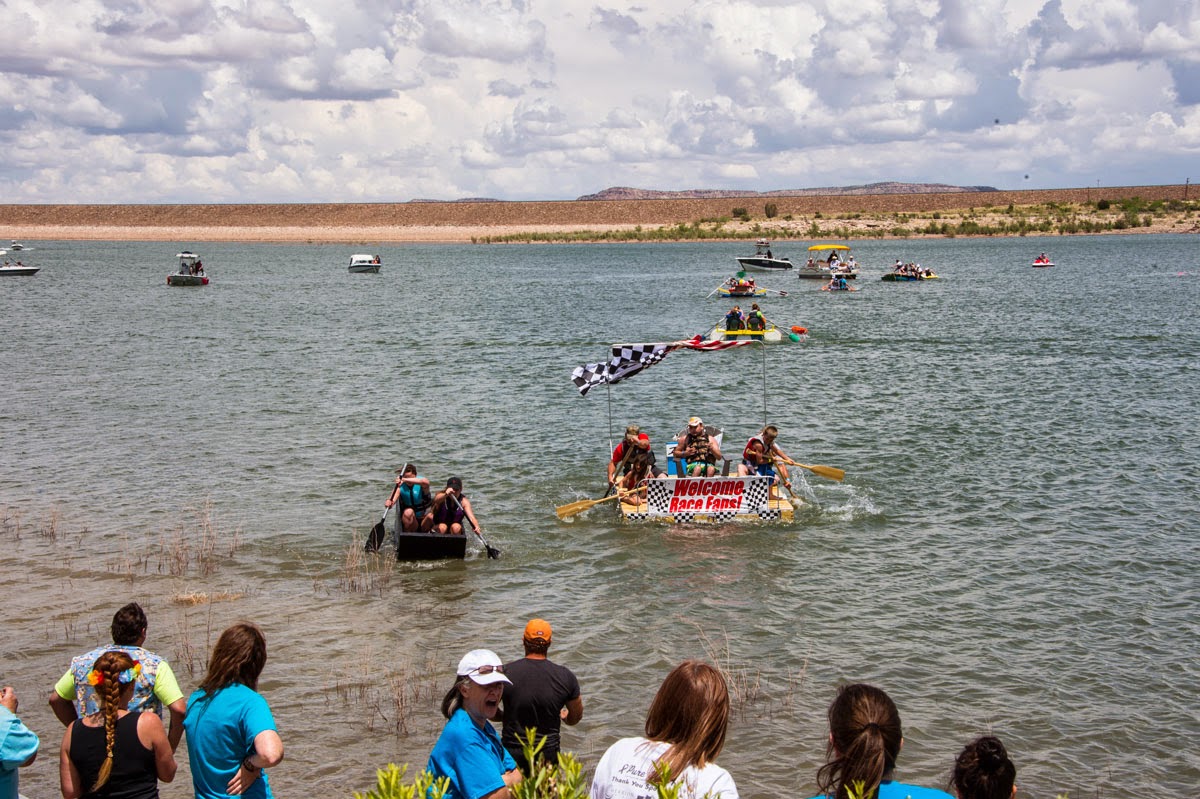 There were almost as many dogs in attendance as there were people!!  Thankfully they kept them up top, because in the middle of one race there was a commotion down the hill when a rattlesnake came out of his den to see what the fuss was all about.  Personally, I thought they should just leave him alone, but that was not the case!! 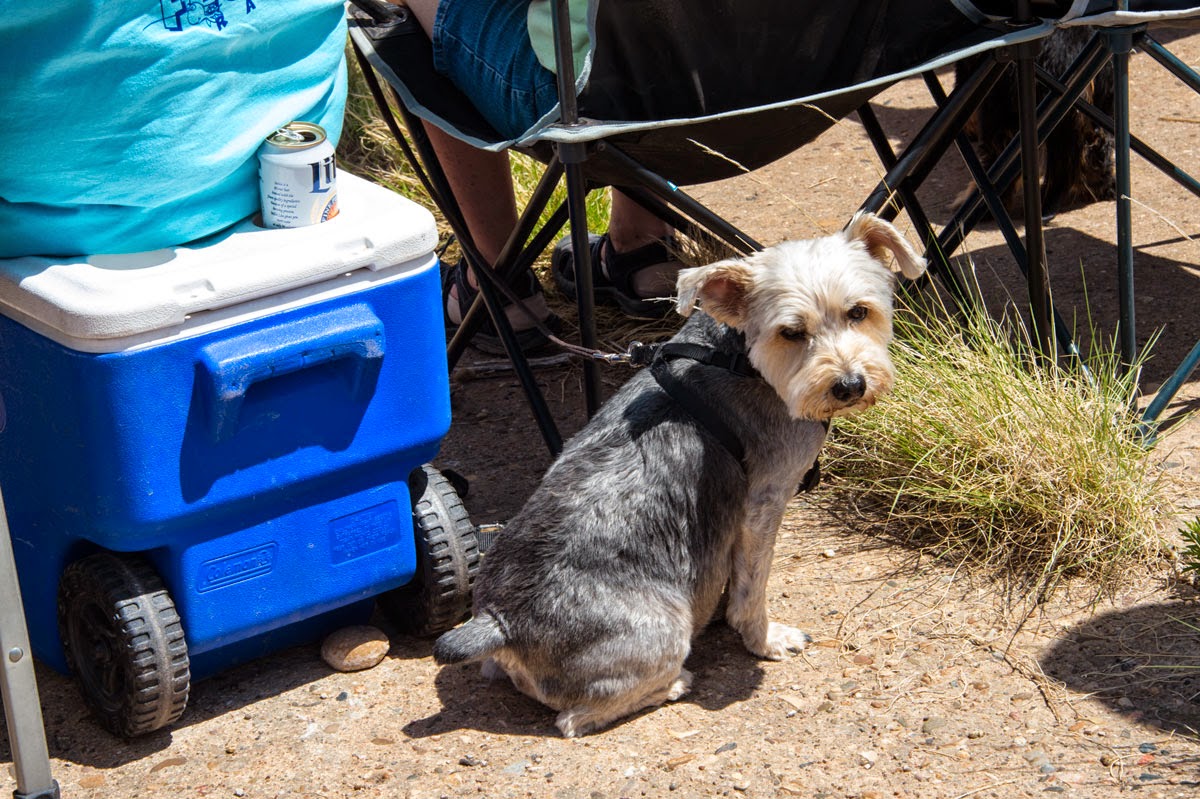 Should you want to join in the fun next year, here's a good example of how to make your boat!!  A couple of empty drums, a little PVC sewer pipe, some insulation foam and a pad tied on top for comfort!!  I think they lost however ..... 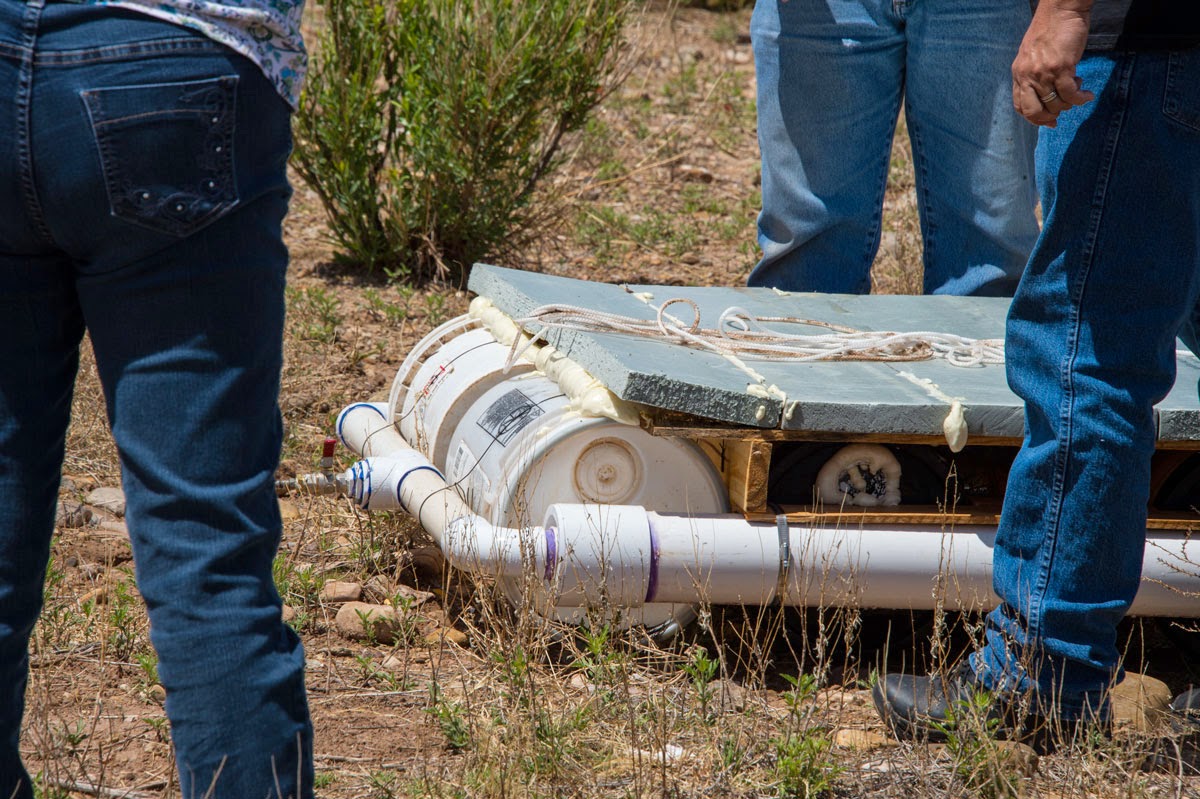 The fun over, we decided to hit a few more caches before returning to Tucumcari.  Yes there are caches here ... out in the middle of the desert!!  Definitely watch for snakes and cactus!!!  The fascinating thing is, you meet the nicest people geocaching!!  When the three of us got out of the car and were walking around looking at the ground, it didn't take long for the local Volunteer Fire Department Captain to IMMEDIATELY come see what we were doing.  When Barbara explained what it was, he invited us in to see their fire equipment ... the trucks that is!!!  This brand new truck was his pride and joy!!  I'm thinking they don't get much company here, because he talked for 30 minutes about what was good and bad with every truck in the building!!  We found out he was leaving the next day for South Dakota in his RV.  What a nice guy!!!  We never did find the cache ... someone must have removed it!! 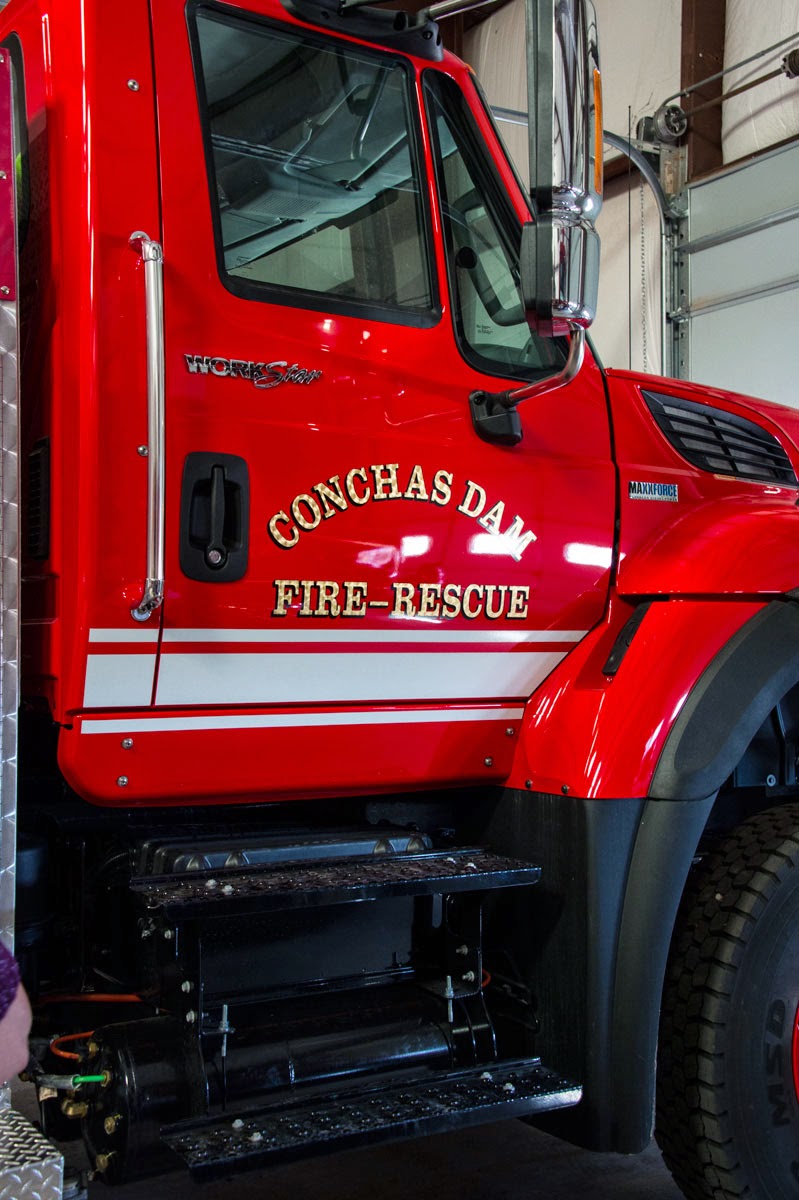 Back on the road 20 miles from anything that even remotely resembled civilization, there was another cache by this tree.  Turns out is was a Red Tail Hawk nest!!  How cool is THAT!!!!! 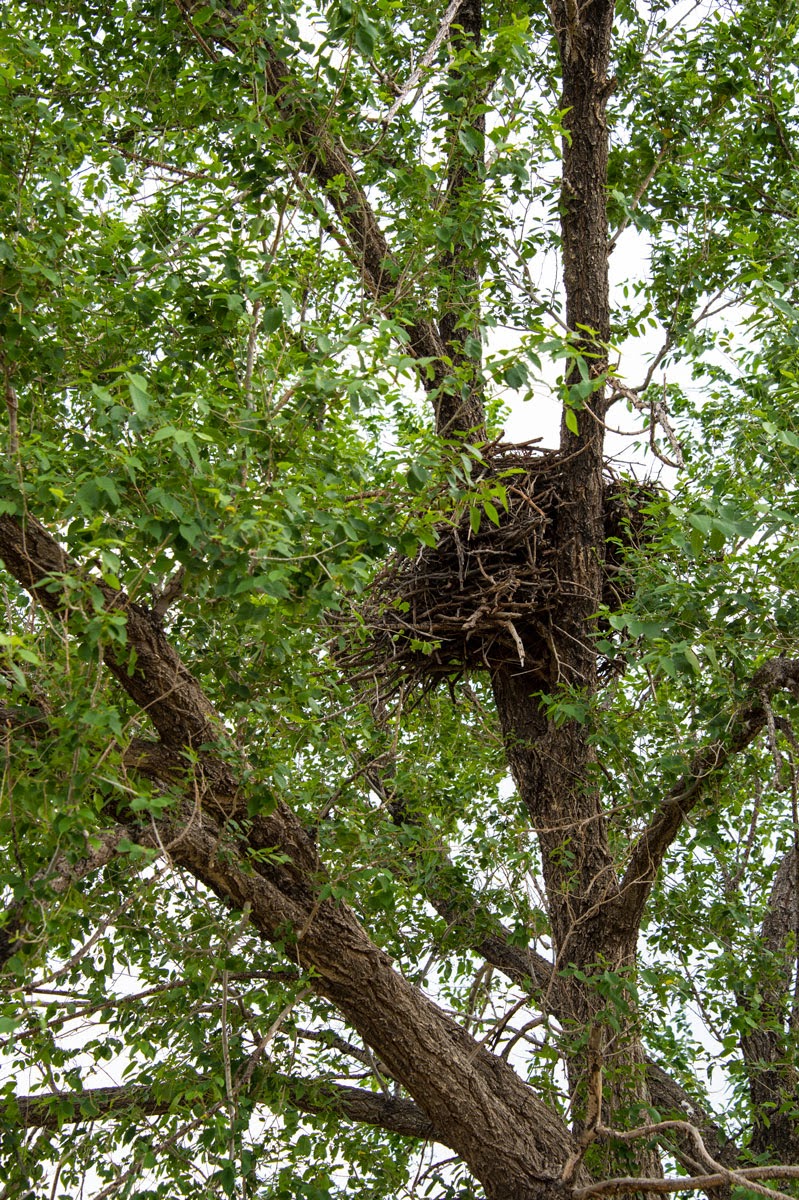 Not knowing, we parked fairly close to this tree, when shortly I heard a hawk screeching loudly.  She was perched on a nearby telephone pole and wasn't the least bit happy that we were there.  We found the cache quickly, as the hawk took to the skies. 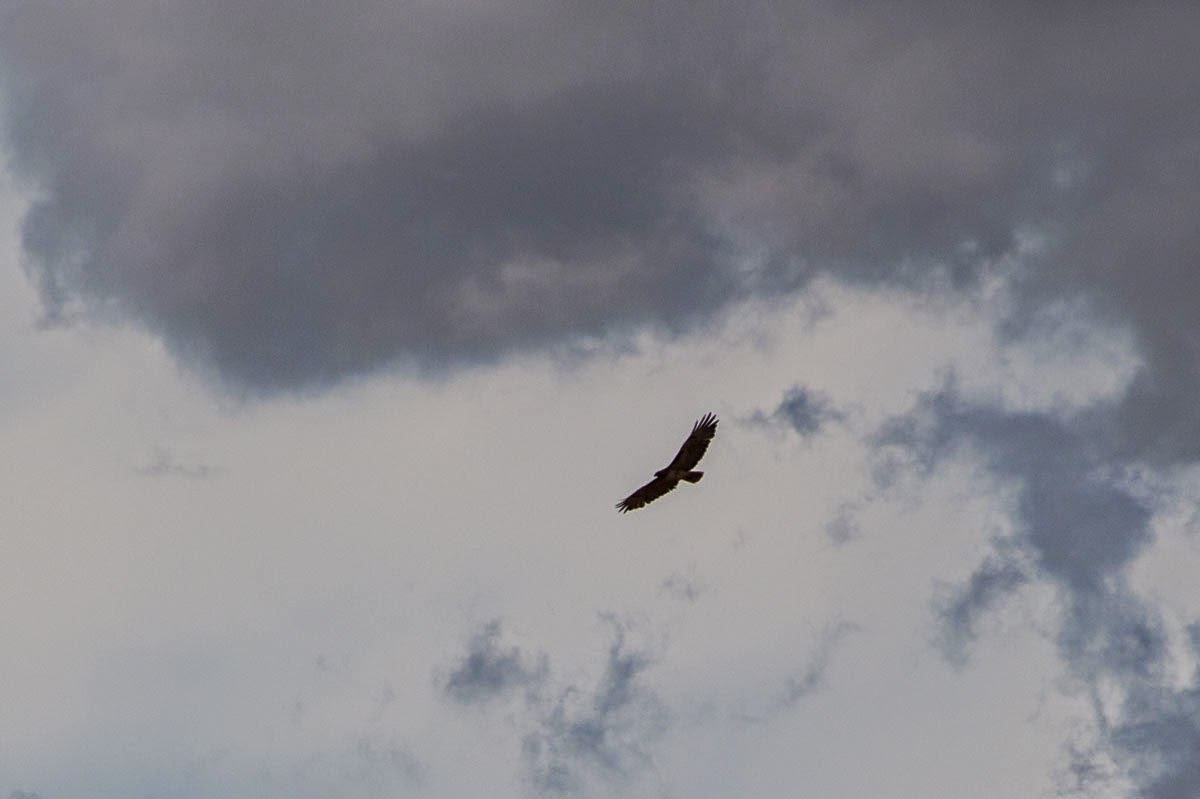 As I was taking another picture of the nest, she squawked again and this little guy stuck his head up to see why!  WOW!!!  BABIES!!!  He ducked down immediately, but every time Mama screeched, he would look over the edge of the nest.  TWO babies were hiding here!!  This is the best image I could get, between the wind blowing the branches and him playing hide and seek!  What a cutie!!  We felt bad we had disturbed them, so I noted on the cache find that maybe it should be moved further away from the nest.  The next car that stops might not be as "friendly"!! 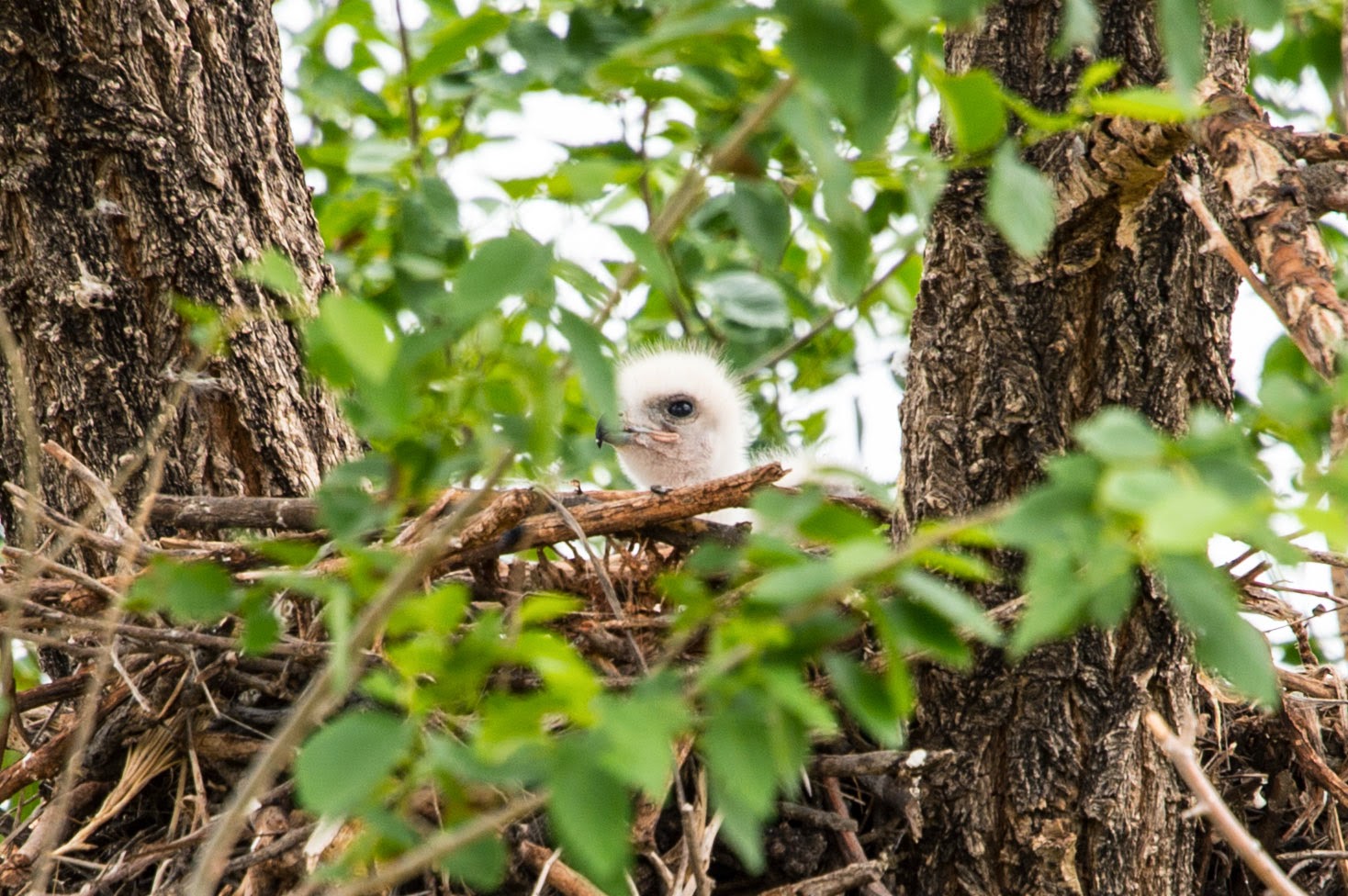 Since nothing could top THAT find, we stopped in at Pizza Hut for some grub and headed back to the rigs.  Another severe thunderstorm warning had come through and I wanted to be at the rig with the puppies, just in case!!  I'm sure I'll get used to this weather sooner or later.  Tom says it's MUCH worse in Kansas City where we are heading the end of June.  Hmmm, maybe I should get some tranquilizers!!!
Posted by Nancy Kissack at 6:19 AM