The OTHER Grand Canyon!!

Mother Nature is alive and well in the Arizona desert where she has created not one, but TWO Grand Canyons.  The Verde Valley cliffs may not be as wide and deep as the original "Grand" canyon, but they are pretty spectacular and beautifully colored.  The only way to see them, short of hiking for days, is on the Verde Canyon Railroad out of Clarkville.

FP7 locomotives, two of only 10 remaining in North America, are the muscle that pull about 10-15 cars, including a caboose, through the mountains.  When they announced the Engineer was only 22 years old, I cringed and grabbed a stance ready for the jerking, jarring start of the train.  It never happened!!  In fact, we started off so slowly and delicately that you could hardly tell we were moving!!  I guess we're in good hands!! 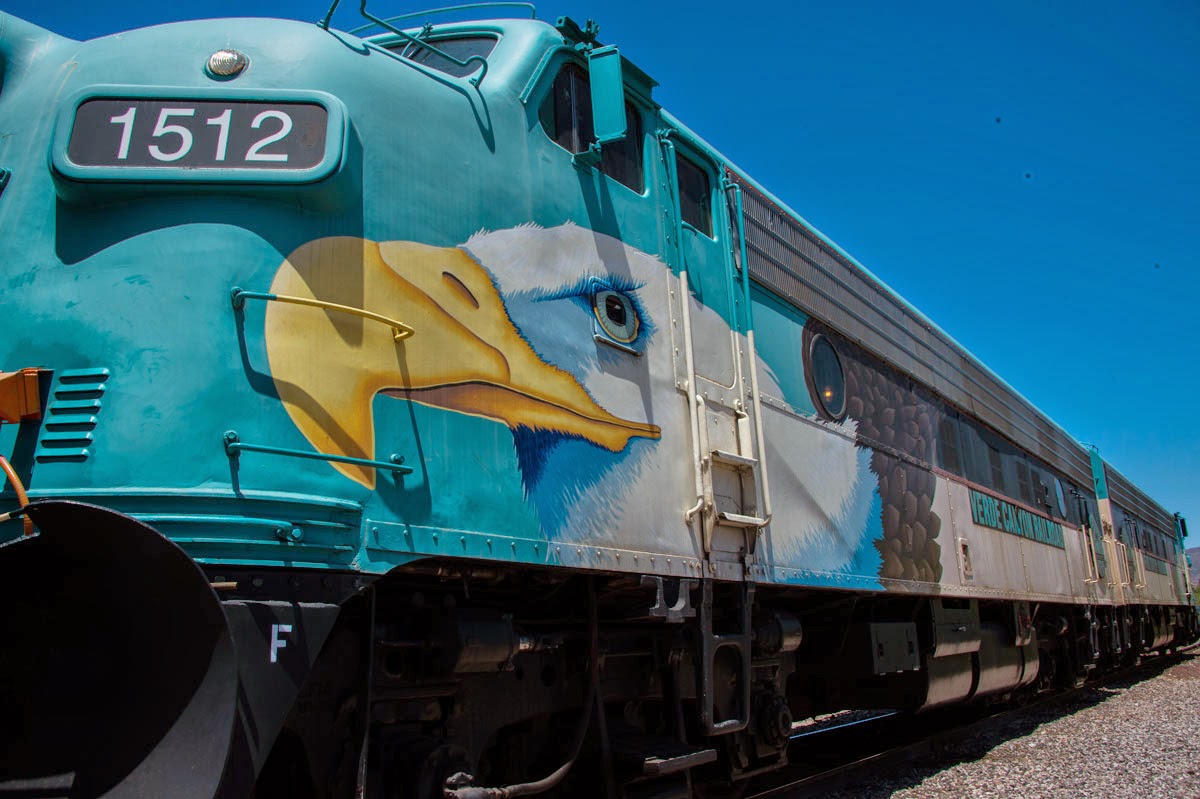 Once checked in, we made a beeline for the outside cars so we wouldn't miss a thing. 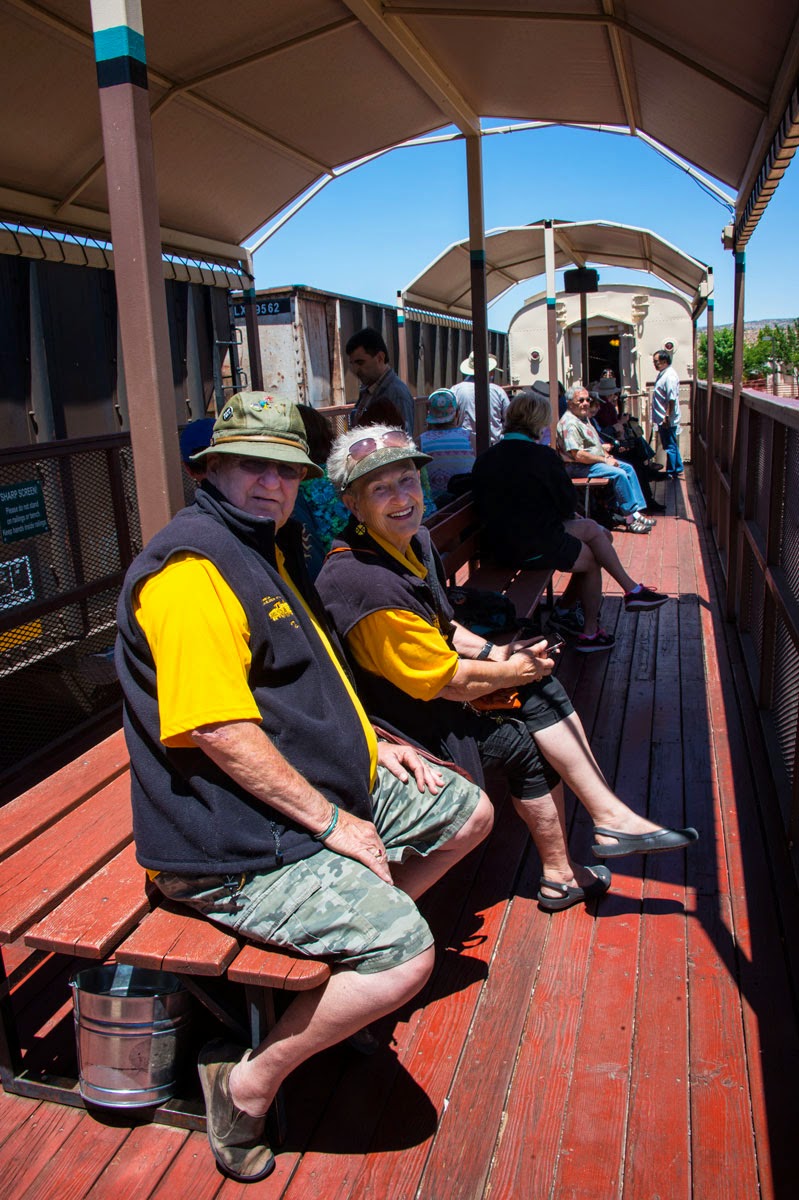 Running by the copper mine, we passed right through the cut of the old slag pile, where molten residuals from the mining process were deposited.  You can see the green telltale color of copper in the now hardened rock.  There is a huge reclamation project in the process of reclaiming this half mile long pile. Rounding the bend, you can see how long this train really is ... fully booked!!  There were still three cars behind us! 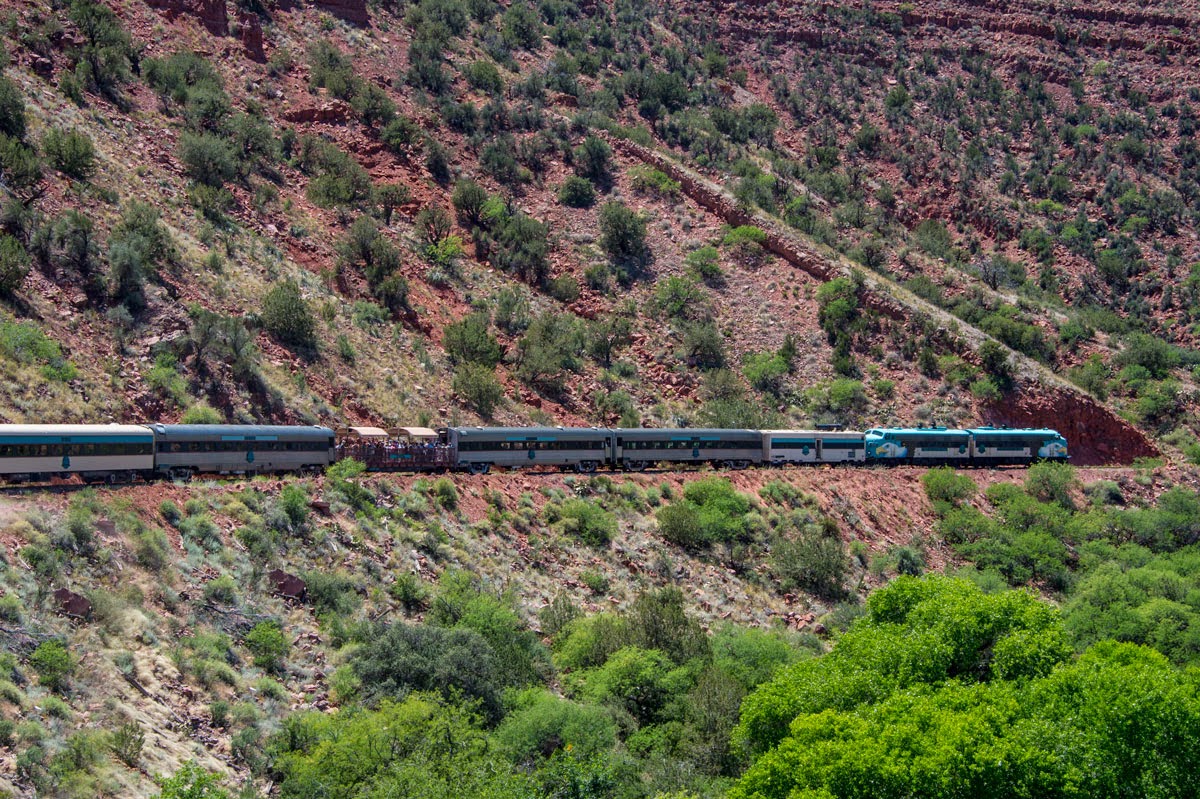 As we slowly rumbled down the rails, listening to the clickety clack of the wheels, we could definitely see where the Verde River got it's name.  A huge line of green follows the curving route of the water. 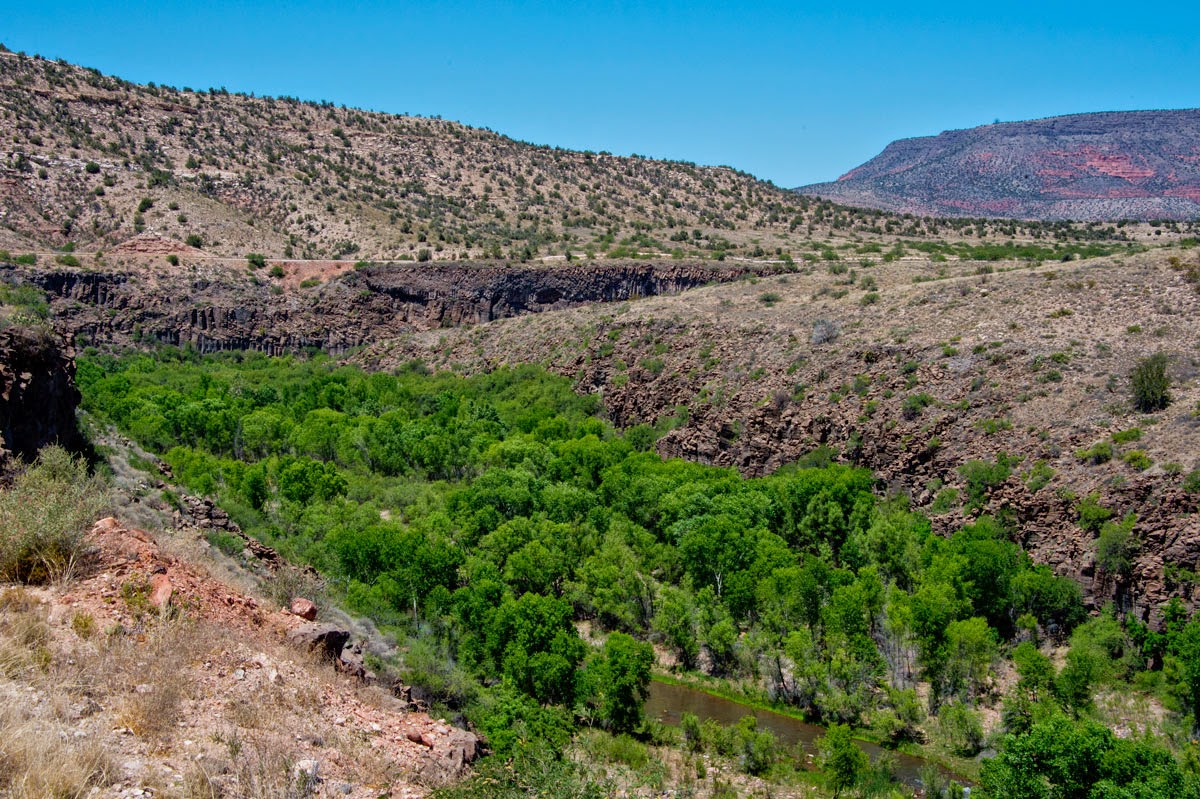 Along the way they pointed out bear dens and ancient Indian housing located high in the cliffs, as well as images of elephants, turtles and of course Abe Lincoln!! 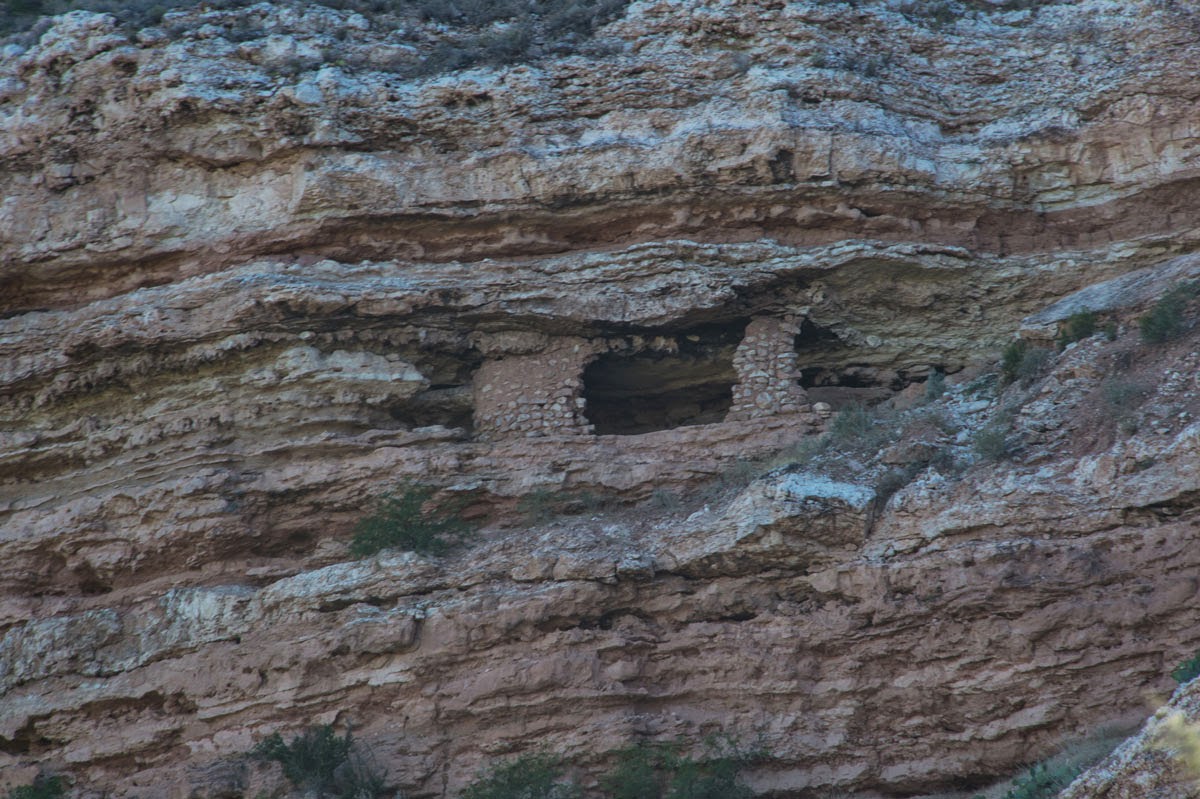 Pretty soon the canyon starting closing in on us as we skirted around the cliffs, barely hanging on to the rails.  Try as we might, we never saw any signs of wildlife except one small squirrel who stood up on this hind feet and watched us pass by. 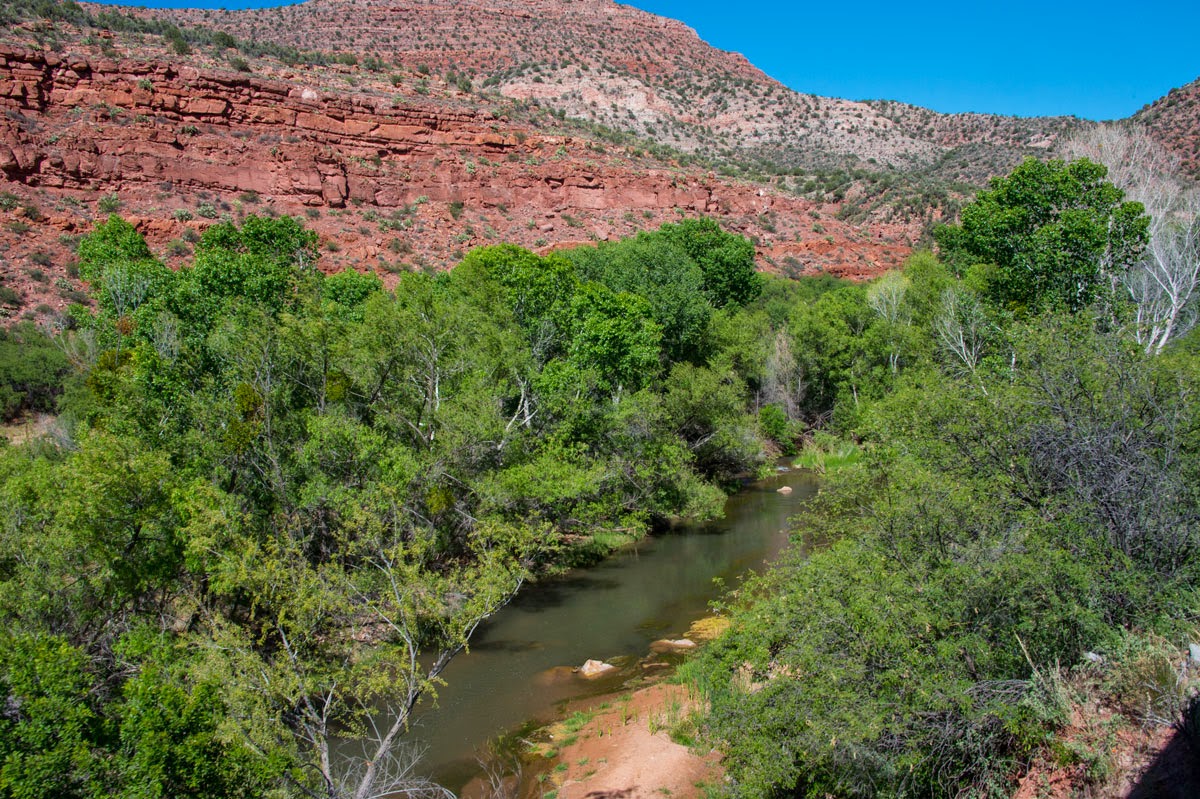 The pinnacles got higher and higher and the red mountains brighter as we passed by rocks that were millions of years old!! 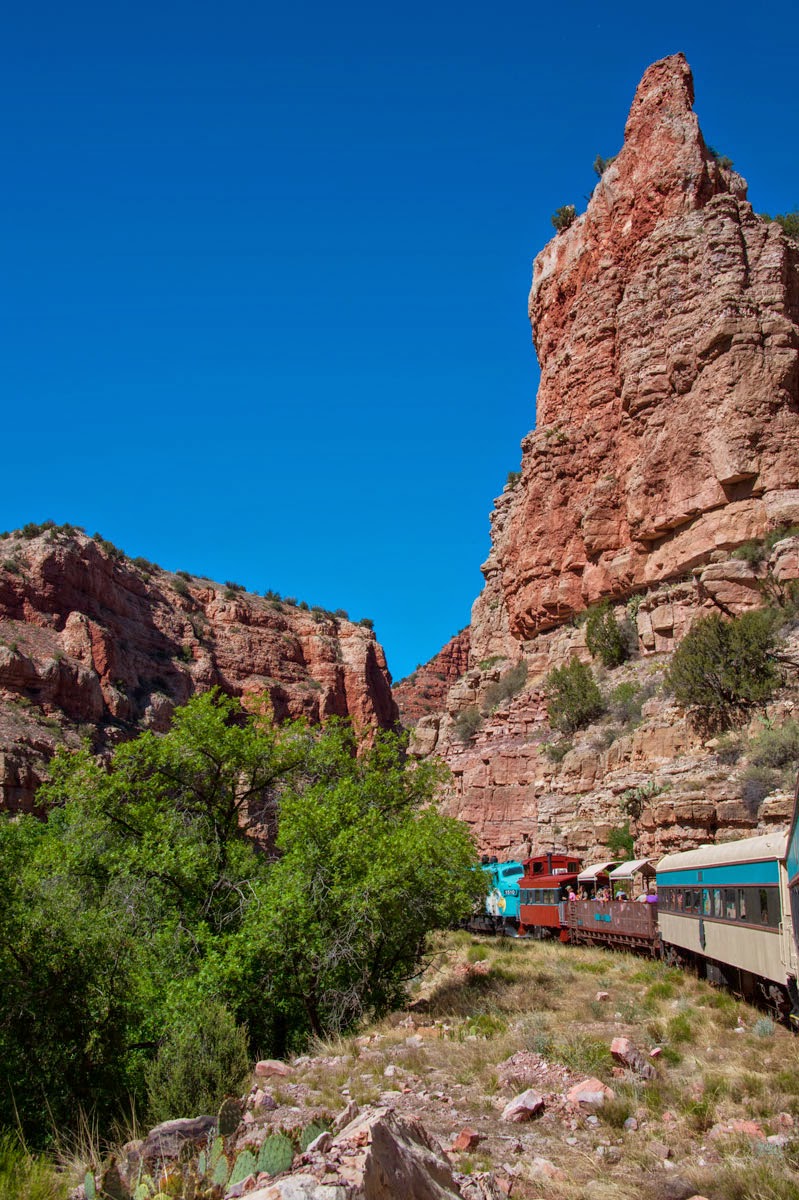 Barely wide enough for the river and the tracks, we squeezed through the canyon walls to our destination. 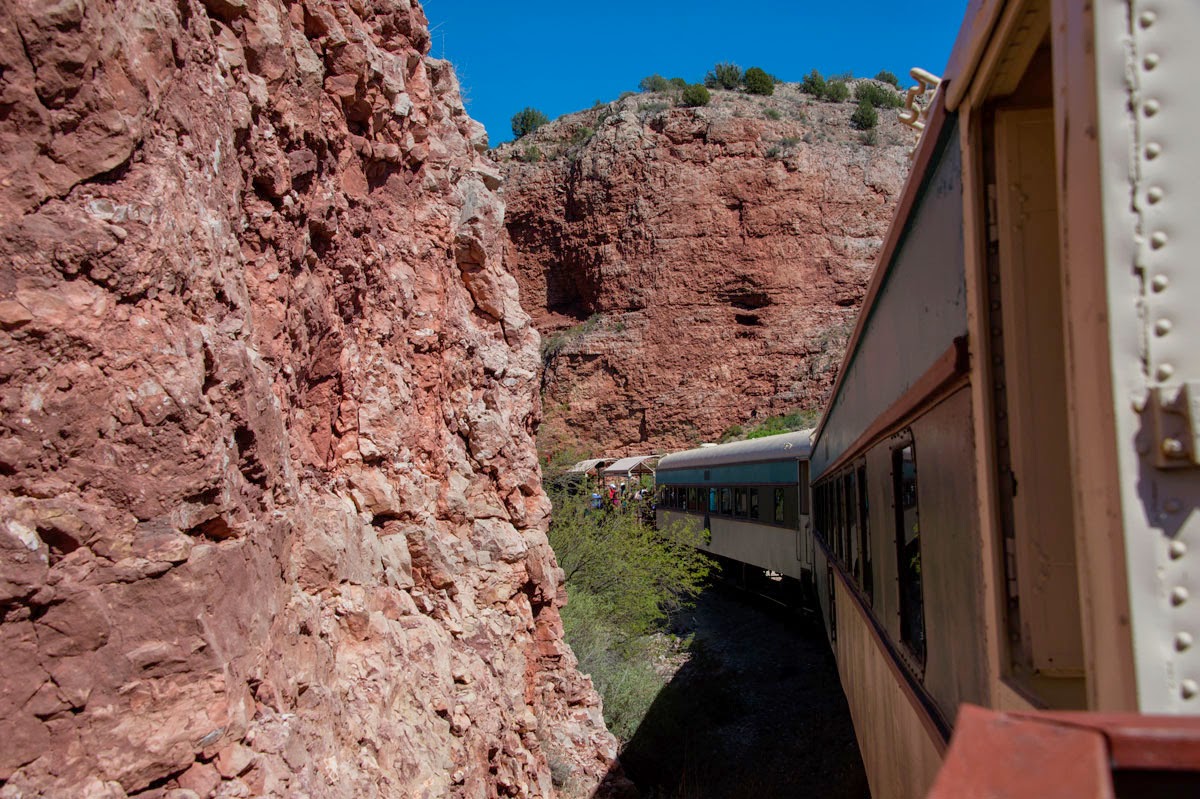 Perkinsville!!!  Okay, they say it's not the destination ... it's the journey!!!  Now a ghost town, there is not much left to show that it actually WAS a town.  Several families lived here many years ago, including past Perkins' generations, who still own the property, now used for cattle. 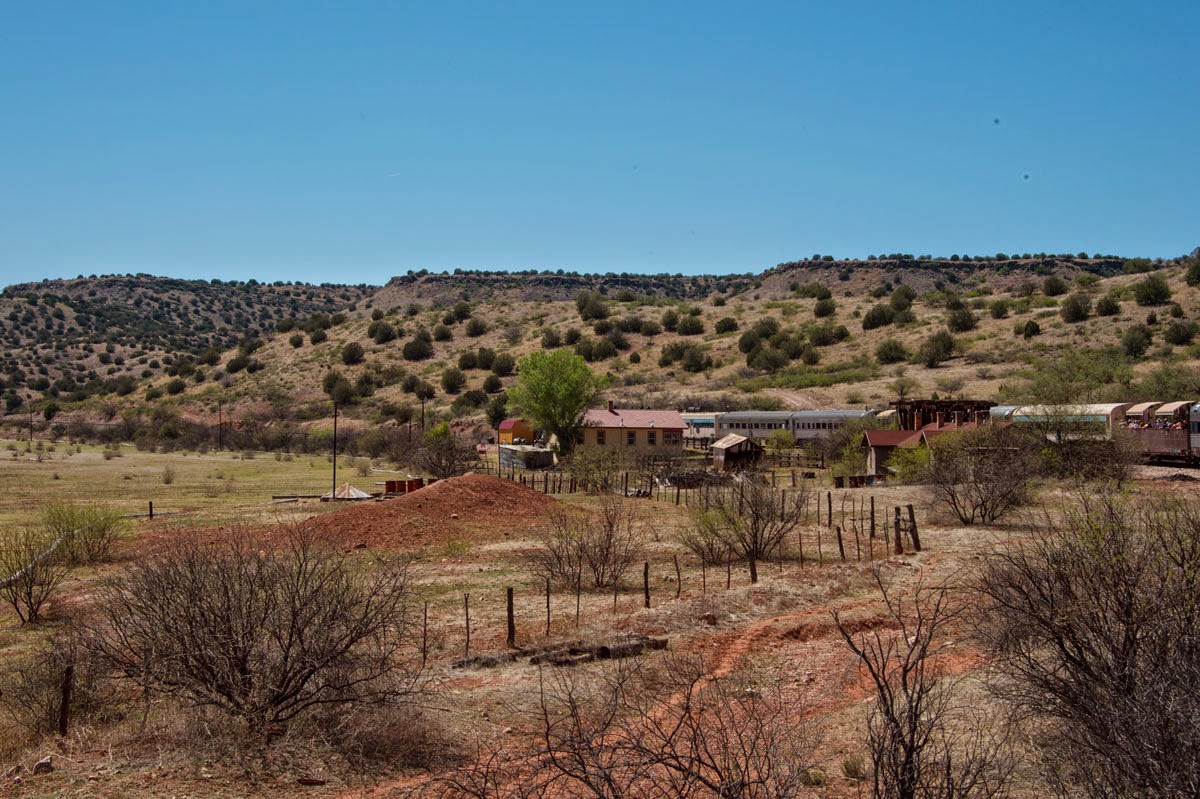 The old train station played a big part in some old west movies, but the water tower, blown up for a dramatic ending, actually ended up on the cutting room floor. 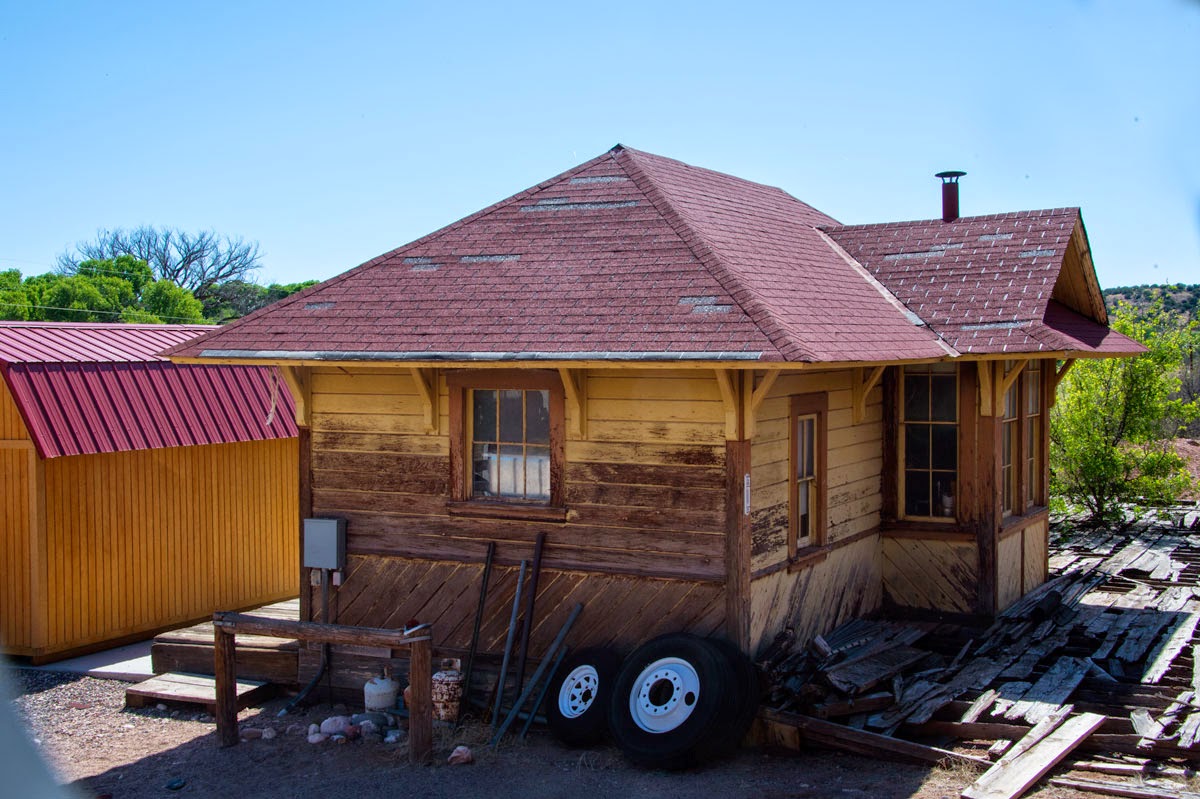 It was here that our Engineer stopped the train as soft as a feather, unhooked, and headed to the back of the train on the siding.  There he hooked up to the caboose and proceeded to pull us back up the hill.  Grades here run from 3-5% and are pretty exciting to see from an open car!! 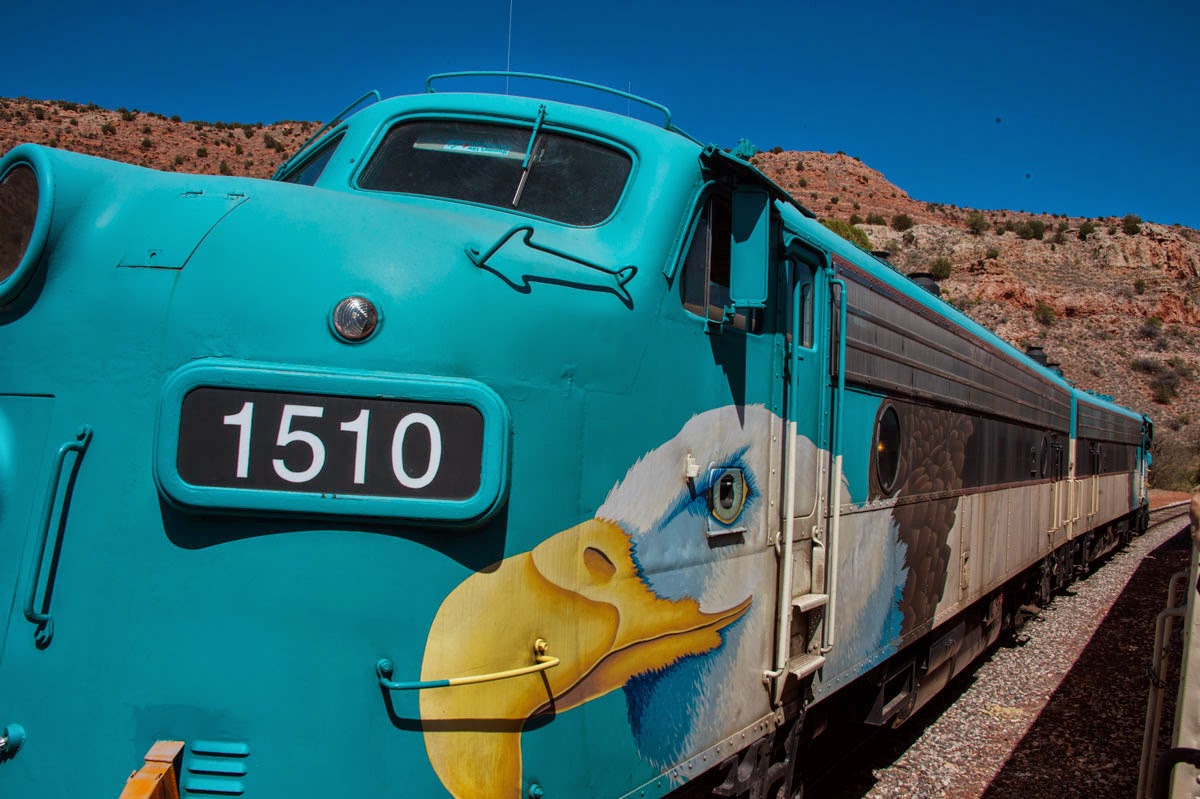 The scenery is spectacular as the river cuts through the cliffs ever deeper, amid cactus and flowers blooming everywhere. 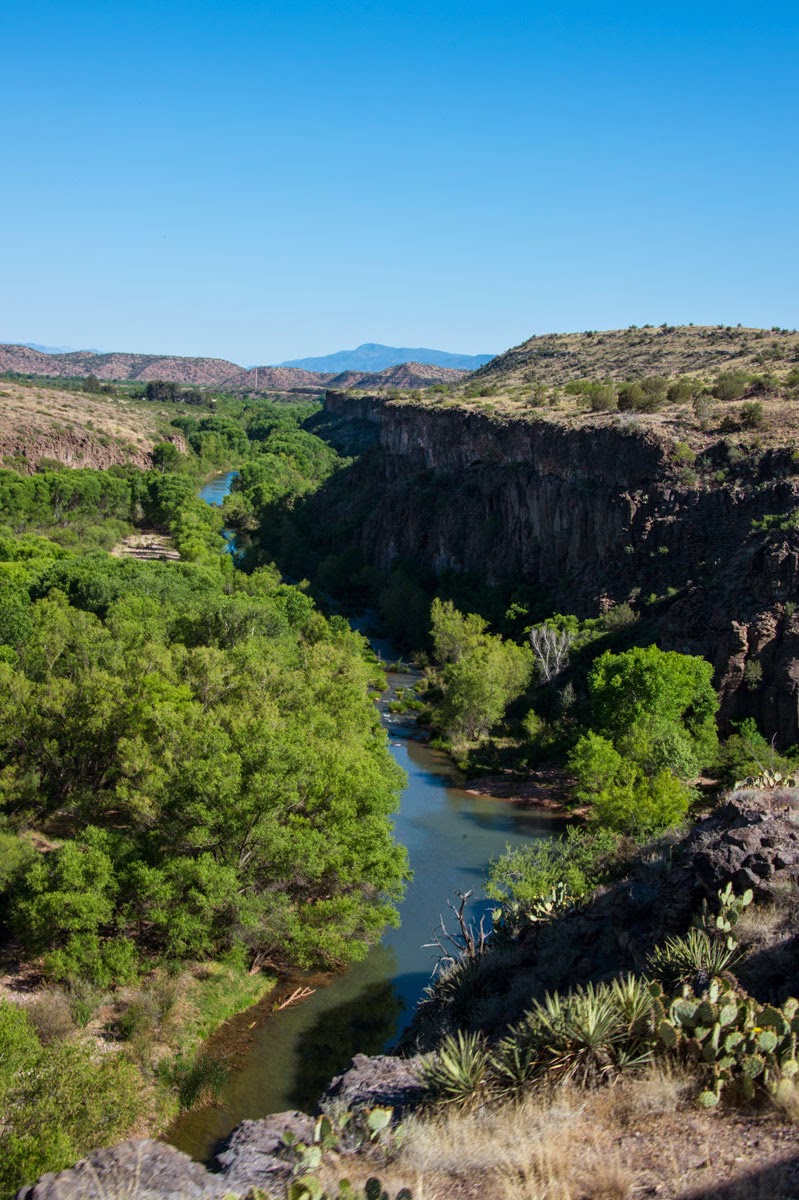 Although there is a small reflection of the red mountains in the river here, there were many more gorgeous images along the way, partly obstructed by the many trees growing along the river. 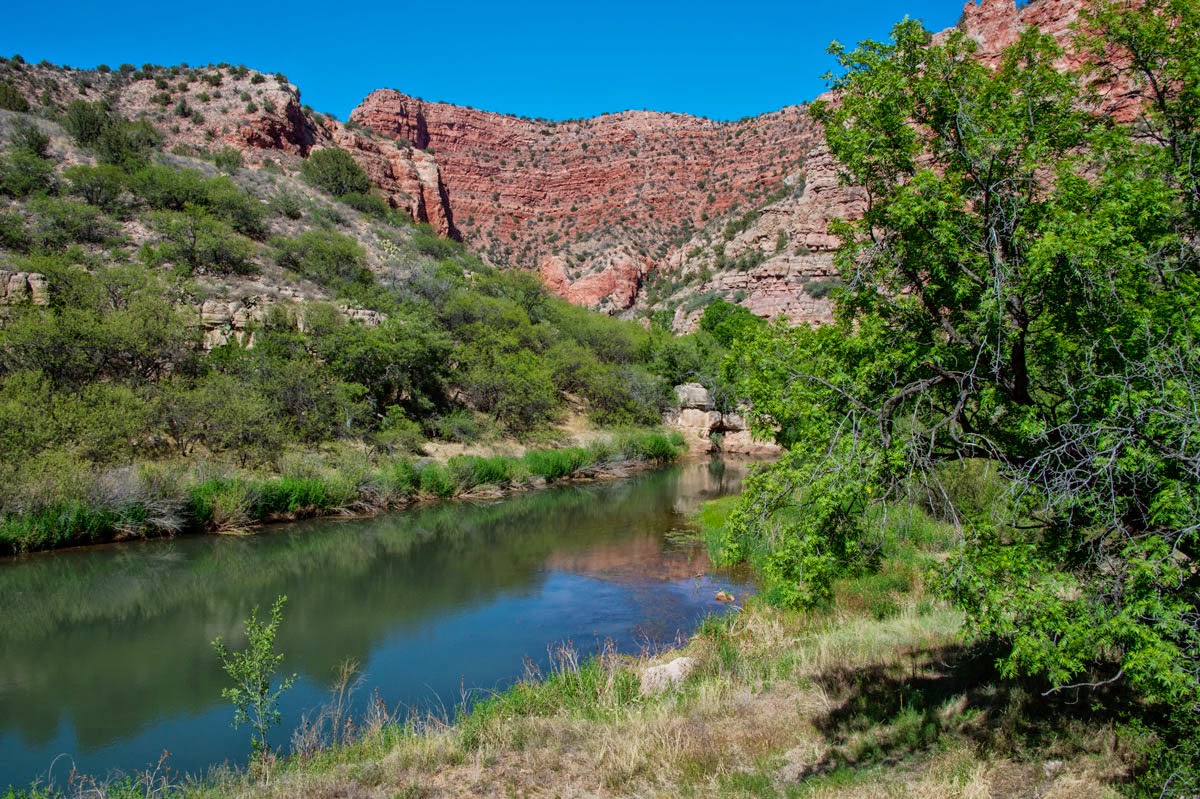 It was an amazing 4 hour trip that everyone should take if they come to this area of Arizona.  Unfortunately, our clickety clack trip had to come to an end, as we waved goodbye in the late afternoon sun!! 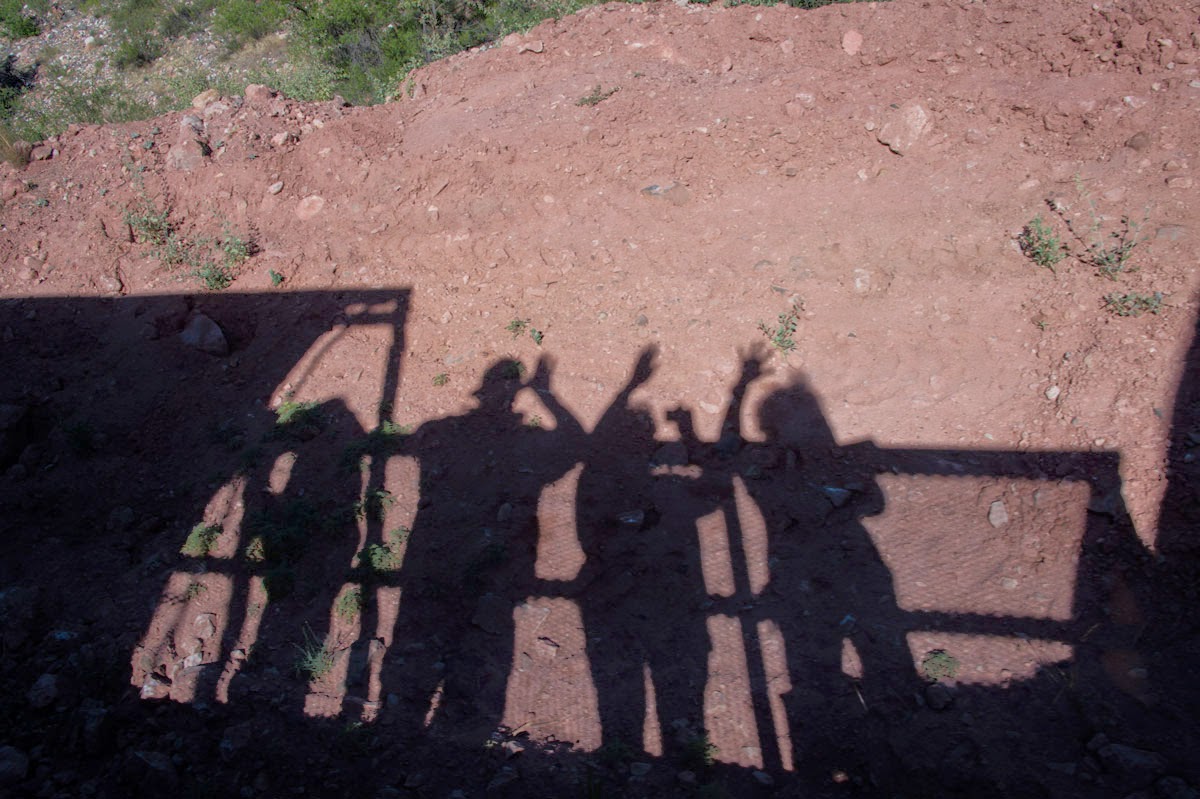 We're off today to walk around Old Town Cottonwood, learning the history of the area from their museum.  We might even geocache a little and find another cupcake!!!  or TWO!!!