After a baggie breakfast (are you familiar with boiling eggs in a bag?) we had a Golden Spike business meeting where we talked about the upcoming rallies in Portola and Redmond Oregon.   Unfortunately, they won't be on my schedule as I head back East with the Westerfields.

A quick group picture by the pool and everyone headed back to their rigs to get ready for the Fullerton Rail Days adventure.  This day's trip would leave my puppies without a break for too long a time, so I opted out, becoming the Golden Spike Dog Sitter For A Day!!  Therefore there's no great pictures of yesterday.

The group carpooled to the Anaheim train station and rode Amtrak to Fullerton where I understand they saw a few miniature railroad displays made by local enthusiasts along with some interesting vendor food.  Back on the train to San Juan Capistrano, they toured that small town before dining at Sarducci's Restaurant, arriving back at the RV park around 9:00 pm.

Me????  I spent the afternoon letting Cooper drive me crazy.  I'm sure I retrieved his ball from under the dash at least 12 times!!  He has me VERY well trained!! 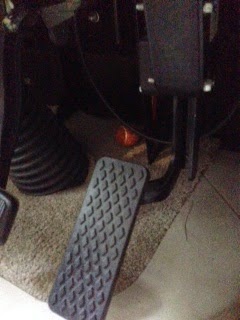 I walked Mika from next door, a little sweetheart who wasn't too happy a stranger was entering her territory.  At least I tried to ... she wasn't interested in leaving the vicinity of her home.  After dinner however, she loosened up and we went for a nice walk around the park.

I quilted for a short time and flicked the ball in the air for Cooper to catch until I was done with that fun!! 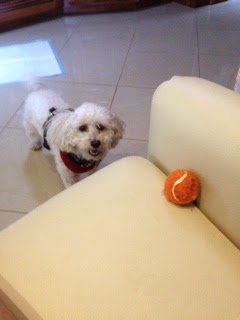 Having searched the internet for yarn shops in the area, I finally headed out.  Of course anything that looks fairly close on the map is actually 20 miles away, through LA traffic.  Two shops didn't even have an address displayed on the internet, just the cross streets.  Both were out of business.  Okay, I'll stop by Radio Shack and get that weather radio I need.  It was not to be ... one closed, the other didn't know what I was talking about.

The last place on my list I found as I was sitting in a parking lot, trying to figure out how to get back home.  A tiny shop stacked to the brim with yarn, a nice German lady invited me in and proceeded to teach me how to knit the European way.  Seriously, I didn't have THAT much time to hang out and I was afraid of getting buried by all the hastily stacked sacks of yarn and magazines!!  I did find one nice scarf I loved and she was very helpful in showing me the $55 skein of yarn it came from.  It's not expensive she exclaimed ... it's enough to make TWO!!  Since the pattern was free, I accepted her offer, finally able to sneak out as she waited on another customer (after I paid of course)!! 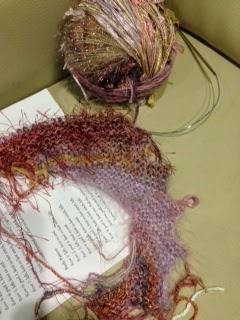 I ended the day listening to the crashing and banging of Disney's Saturday night fireworks.  I ran out for pictures, but couldn't see anything.  Thirty minutes later, I breathed a sigh of relief for the quiet ... which lasted all of 30 seconds as the second, and much closer, blast of fireworks started going off.  The echo of each "boom" was almost as loud as the actual "boom" ... and went on for some time while I tossed and turned trying to get to sleep.  I'm guessing it came from the Angels Baseball Stadium, either celebrating season opening or Cinco de Mayo!!  I never did see the rockets red glare, but I heard a couple of people chasing a dog around the park.

Today I pack up and head to Garden City Elks for a couple of days.  Parts for Tom and Barbara's rig will be in Monday, at which time we will head off into the wild blue yonder!!