It was a gorgeous sunny morning, as I walked around with my camera, seeing if there was any way I could get into these old motel buildings. 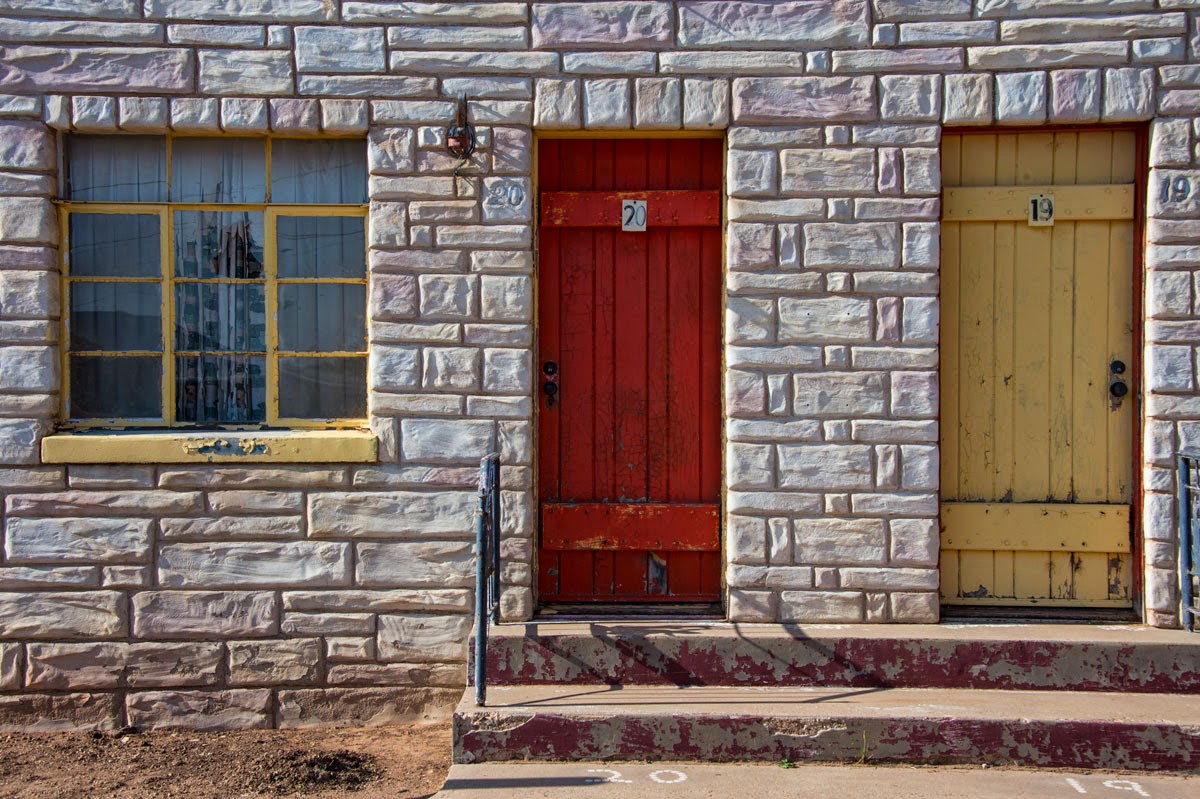 Each one had an overhang, as you can see here, but the "real tree" logs rotted out long ago, allowing the entire roof to hit the floor.  It appears the people just walked away, as some rooms still have mattresses in them, and one ... green shag carpet!! 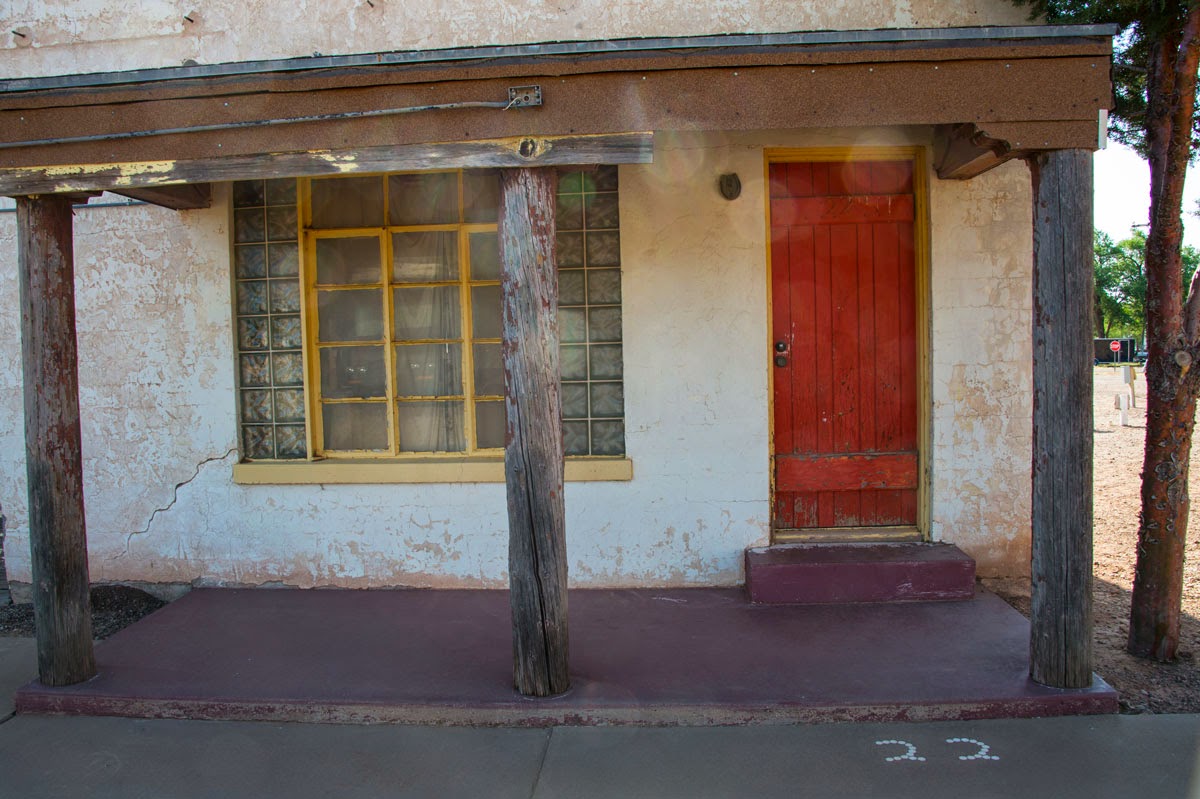 Having heard on the news that there were storms heading our way, I kept checking my phone for weather info.  You've heard of 3G and 4G??  They have "E" here, and it's REAL slow!  No problem, storms will probably be elsewhere because it hasn't really rained here in seven years.  As we headed off North to Logan to meet Richard and Francis, we passed by one of the many murals here in Tucumcari.  This town was originally a construction camp for the Chicago, Rock Island and Pacific Railroad, built in 1901, but named Six Shooter Siding due to the number of gunfights.  There is some disagreement about how it got it's Tucumcari name ... something about the Indian chief's daughter and her two suitors, who ended up killing each other, so the chief killed himself.  Route 66 is what made it famous in the end!! 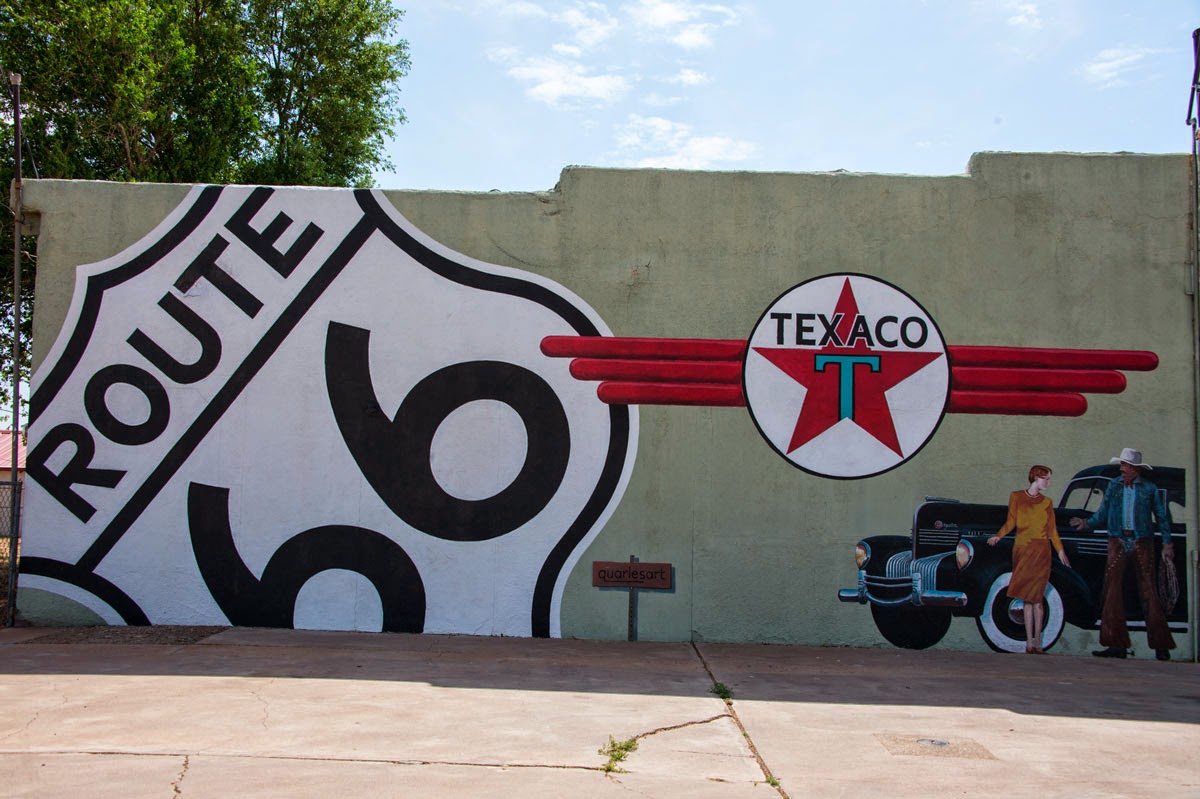 We arrived in Logan and met Tom and Barbara's friends at the Annex BBQ Restaurant that didn't have any BBQ.  They are waiting for the holiday weekend to break out the Q.

Around the corner was this beautiful building that looked worth saving.  Richard said it used to be the local mercantile store.  I'm trying to figure out what I could sell that would pay for the restoration! 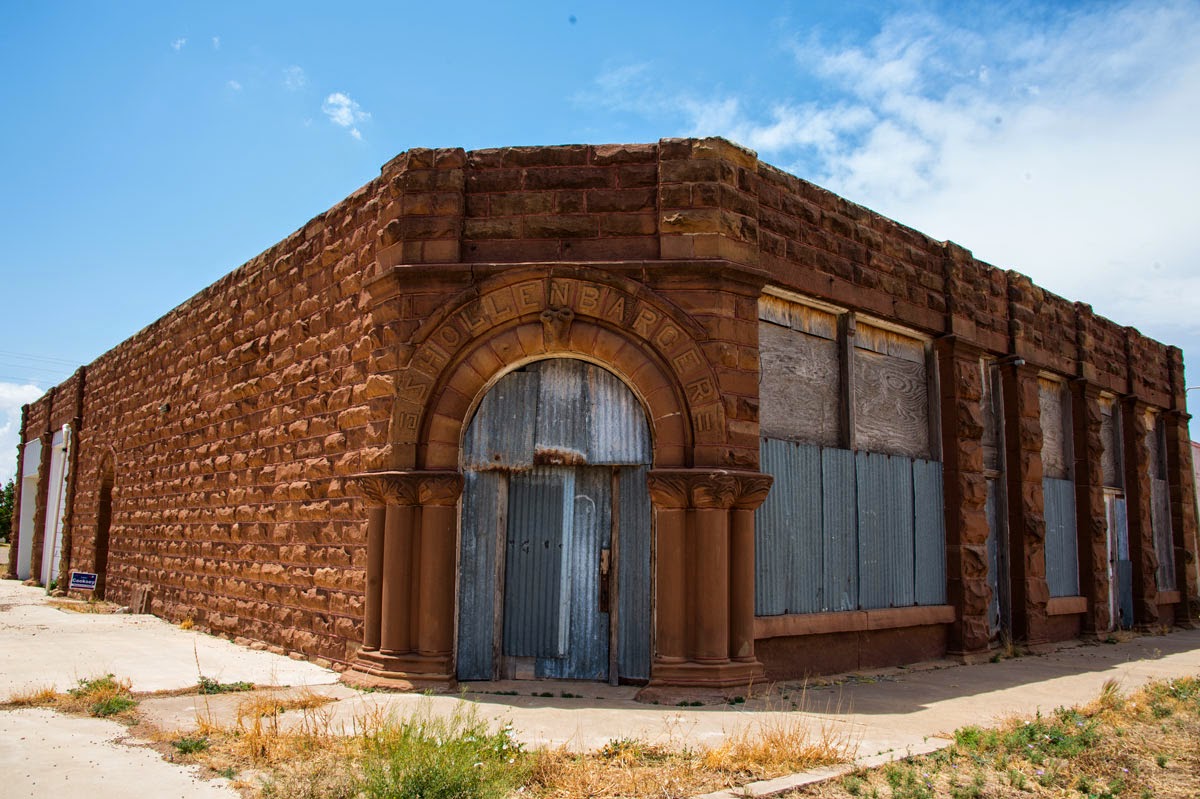 Built by the Shollenbarger (or maybe cer) family in 1911, it is definitely a beauty, built of sandstone blocks. 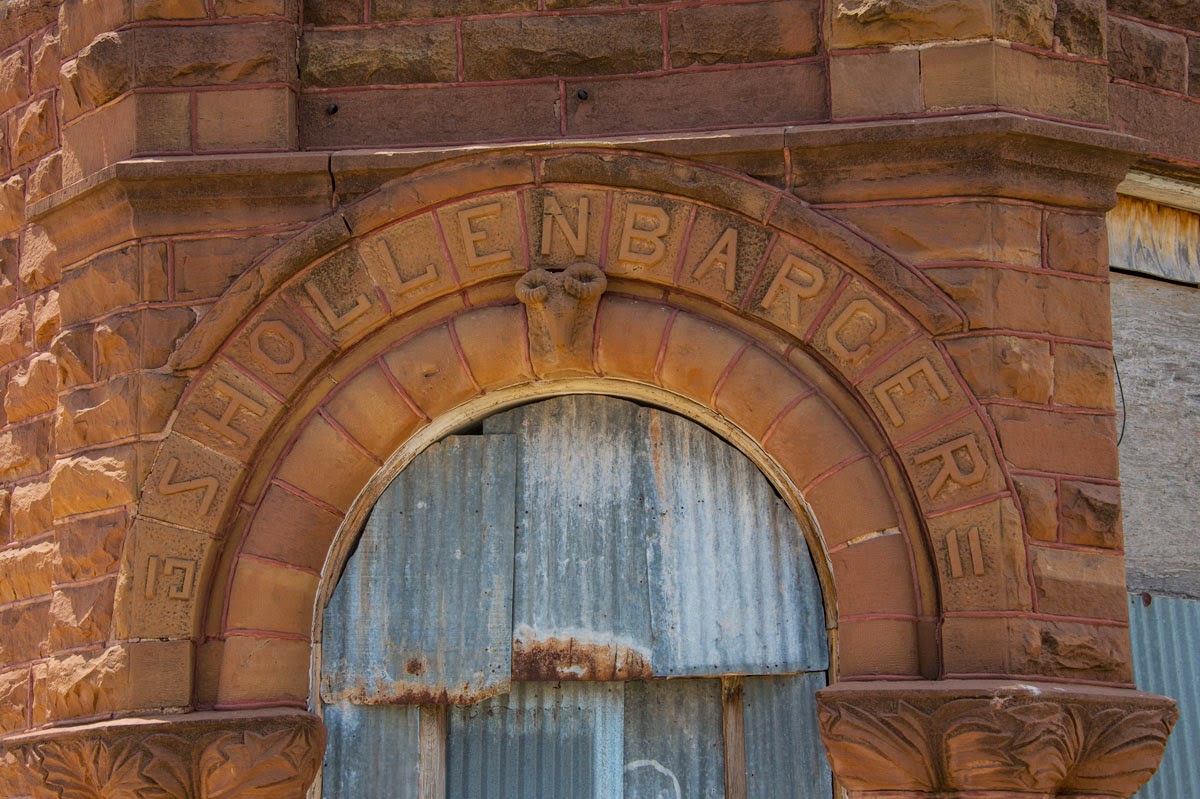 The front was so gorgeous, I walked around back to see what shape IT might be in and boy was I surprised!!  Someone's uncle Joe must have built the back wall after a little too much white lightning. Chalk that one off my list!! 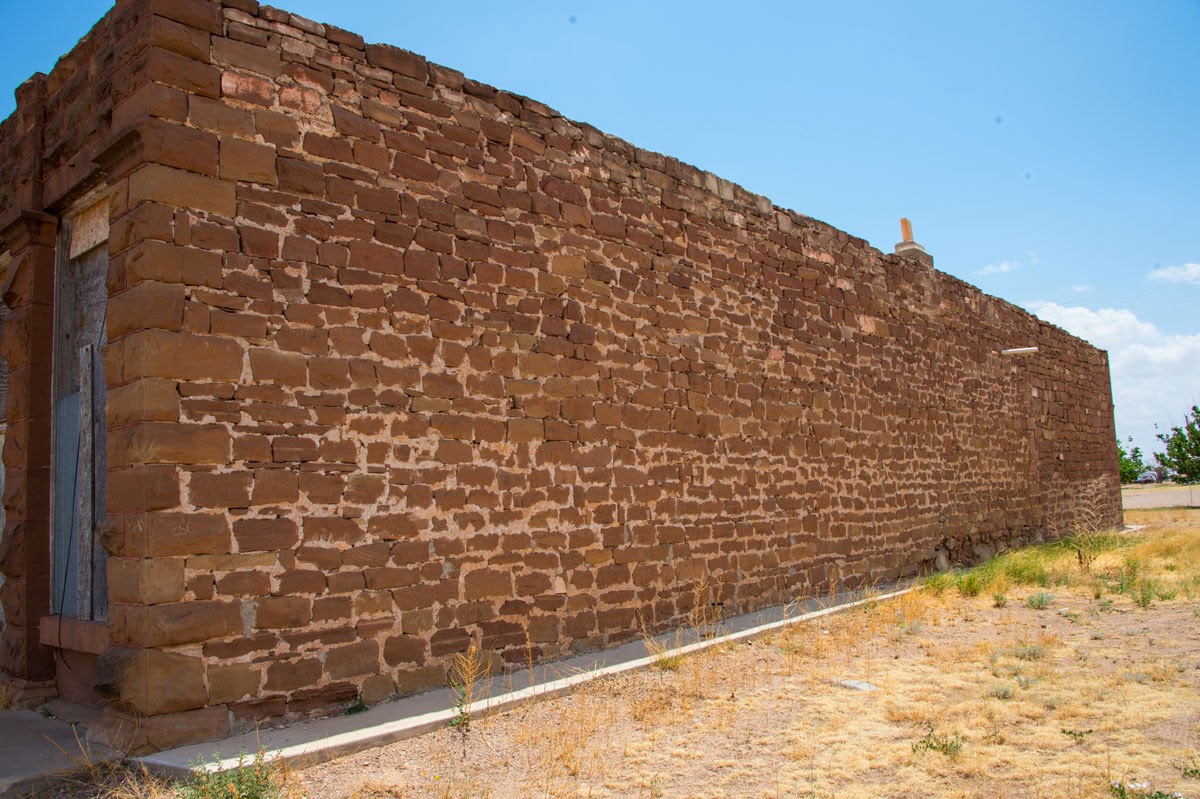 Richard likes bargains and Estate Sales.  Hey ... I'm all for that!   Lets stop!!!  Patty Chance will remember something like this that she purchased in the Grand Canyon.  It's a dye chart, showing what plants the native Indians use to color the wool in their rug making.  This one was made by Christine Lewis in Shiprock New Mexico.  It will go nicely in my house next to my Navajo rug. 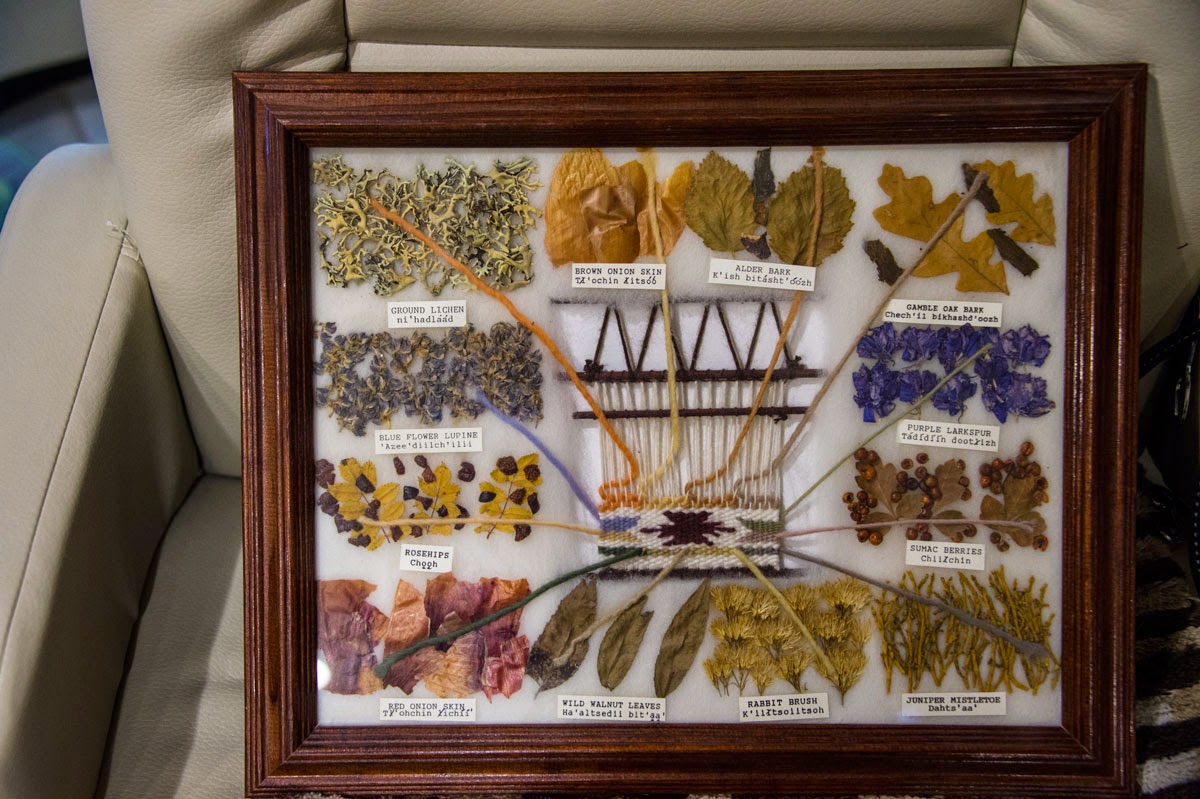 We drove up the road to Ute Lake when we came upon this sign.  Funny ... how could the road end in the water?? 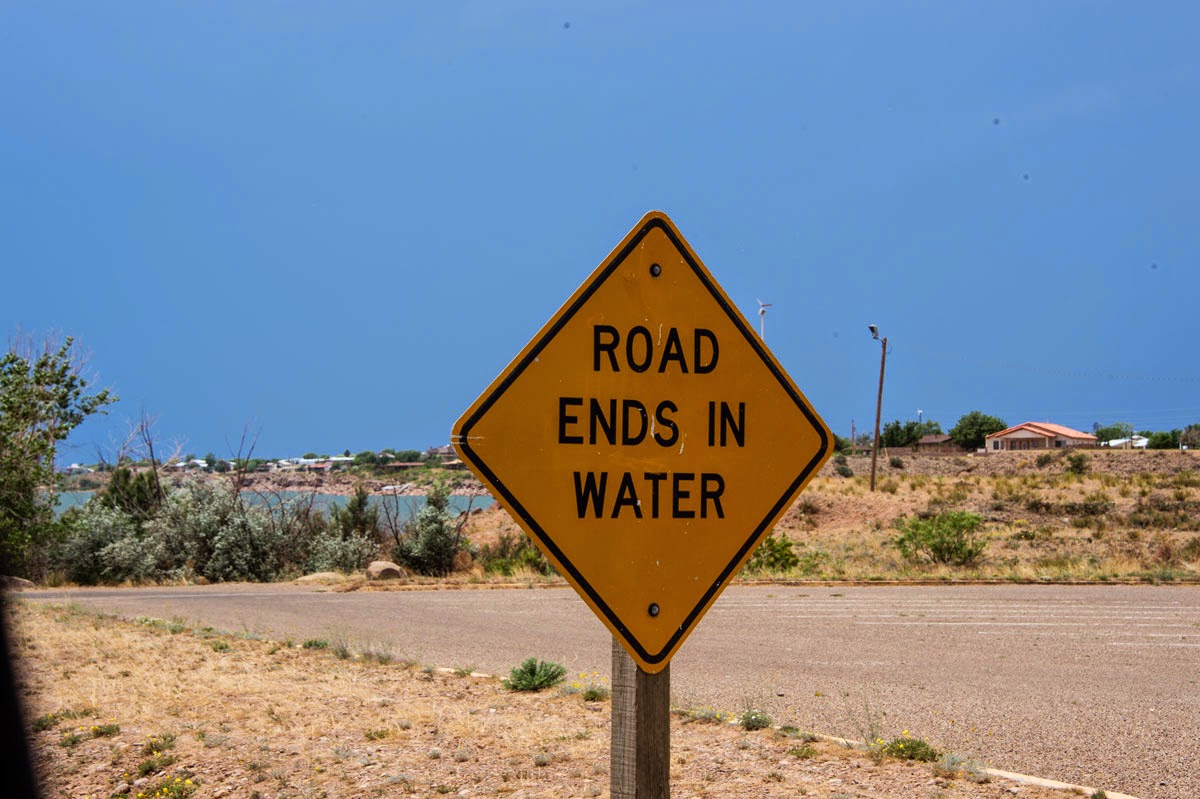 Believe the sign ... the road ended at the bottom of the boat ramp.  I am a little curious about how many people have missed the sign and driven into the lake!! 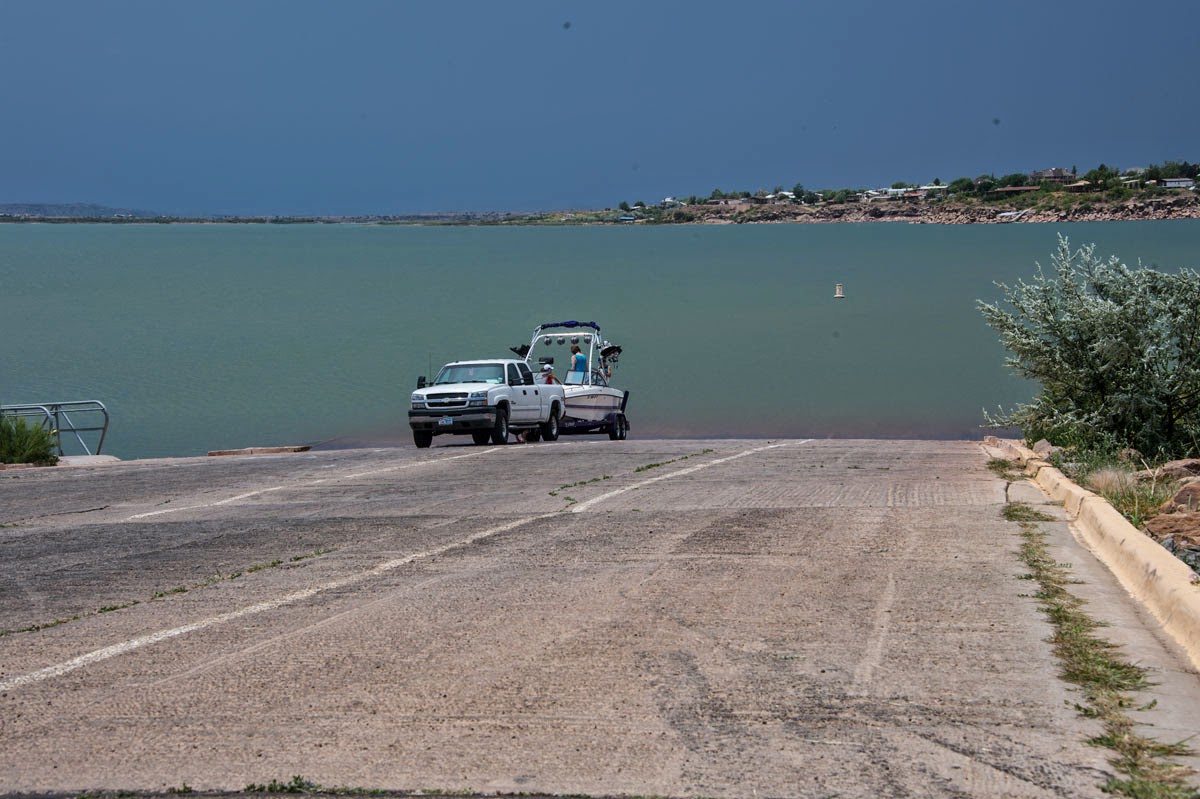 Still leery about the weather, as I looked up at these amazing clouds, snapping away with my camera, I heard "it's just a passing cell.  It will blow over shortly.  We haven't had rain in seven years"!! 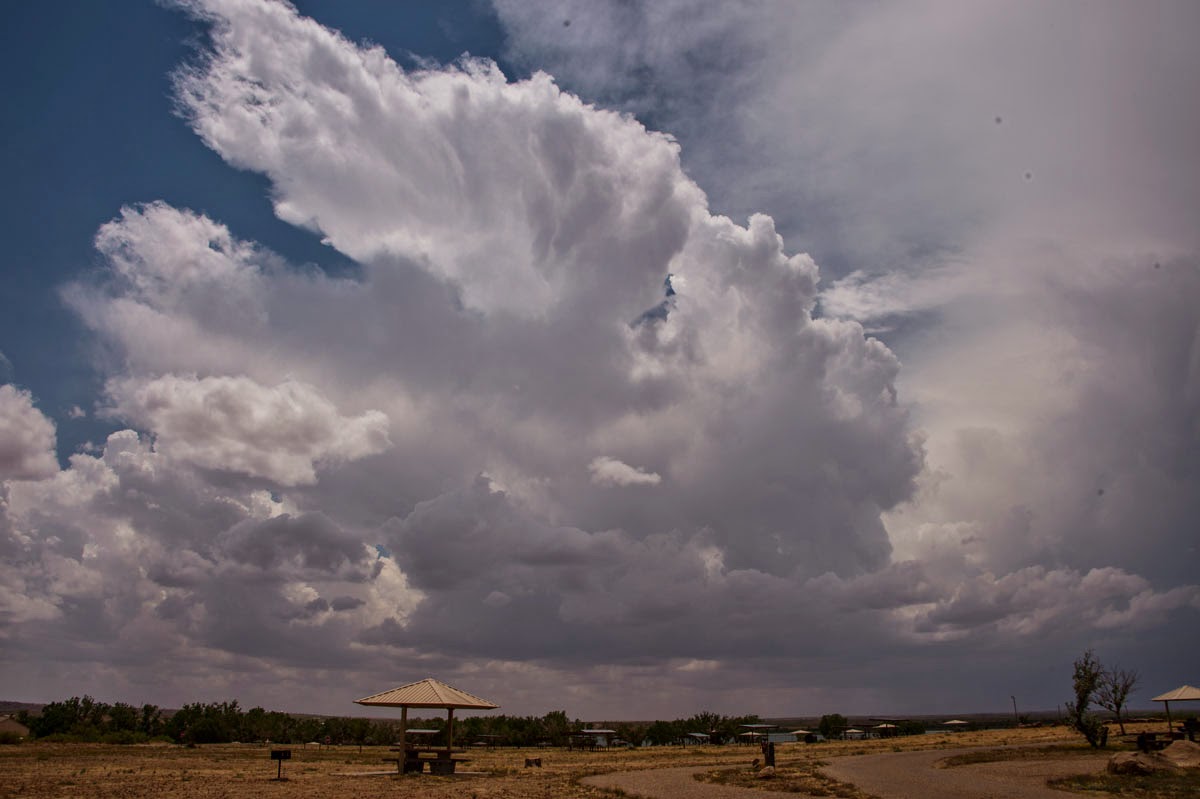 As we drove into Richard and Francis' driveway at about 1:00, it started pouring with bouts of hail, thunder and lighting, the whole nine yards!!  Pretty soon the wind came up.  As I looked out the storm door at the 55 gallon drum lid flying through the sky, Richard slammed the door and said "Get AWAY from the glass!!!!!  It could be a tornado"!!!   Yikes you should have seen and heard the wind.  My only thought was of my puppies locked up in my flimsy RV, 25 miles away.  No problem, it won't keep it up.  We haven't had any rain in seven years!!  Two hours later, my phone FINALLY loaded the radar map of this area.  Excuse me ... EXCUSE ME!!!  We happen to be in a break in the weather.  It's all RED below Tucumcari.  I think we better RUN while we CAN!!!!  And run we did!!

Back in Tucumcari at the RV park, lightning hit so close it was deafening!!!  The pouring rain kept up all night.  I think it was a two-sleeping-pill night, but I only took half!! 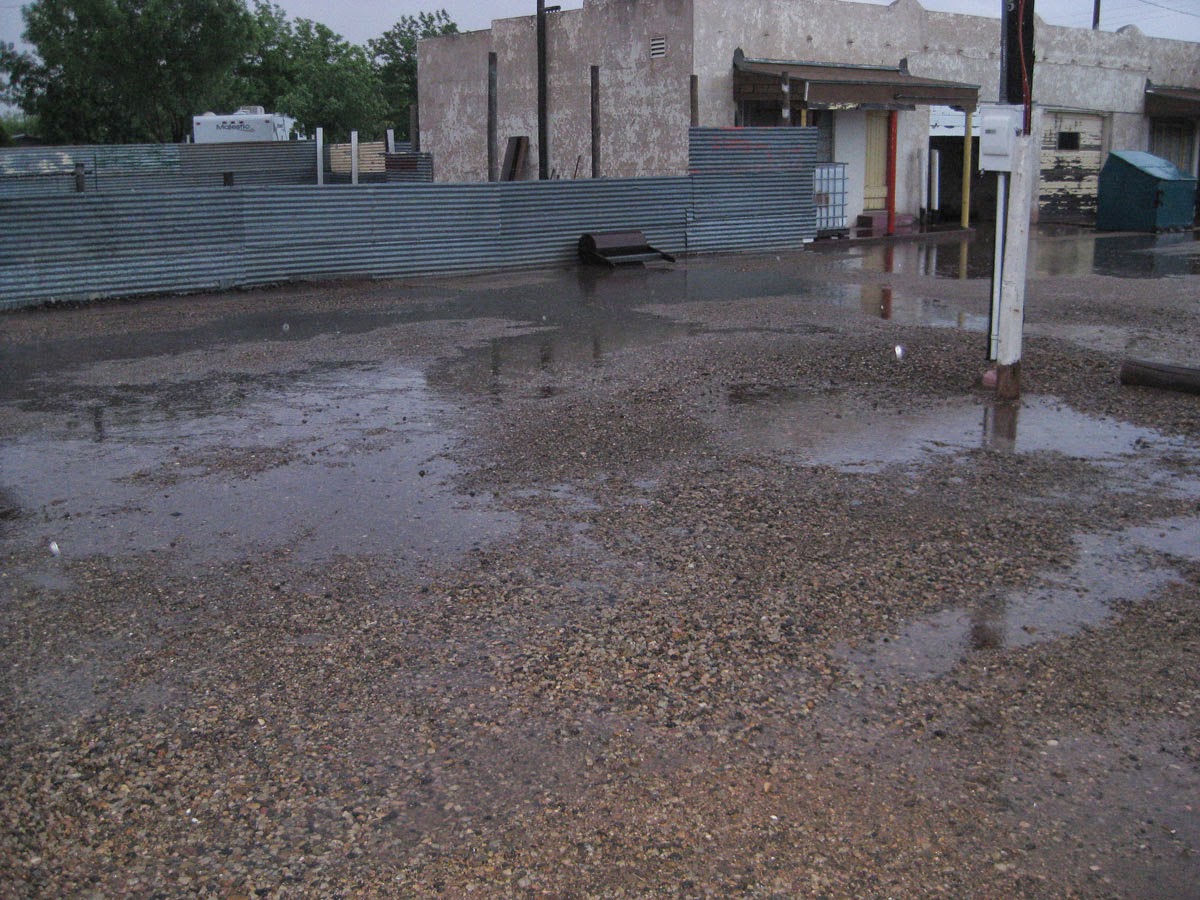 Finally at 6:30 am the rain let up and the skies are blue again ... except for those white puffy clouds in the distance ... just like yesterday!!  This is supposed to keep up for the next three days and is going to bite into my photography time!!  Guess I'll have to be satisfied with drive-by pictures!!  So much for the New Mexico Seven Year Drought!!!