A Day Off The Rails And In The Sky!!!

Here's a picture of most of the group at the Fullerton Train Station.  Yesterday was a day to leave the rails for the sky.  The Planes of Fame are alive and well at the Museum, located at Chino Airport where they are preparing for an air show to begin today. 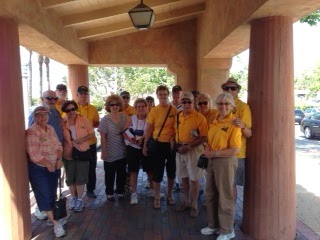 Always worried about malnourishment, the men and three of us women, started off at Famous Flo's Restaurant for lunch.  It was kind of hard to figure out what to eat since it was only 11:00 and we just finished breakfast at 9:30 ..... 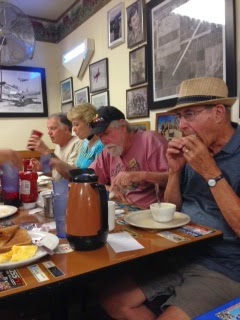 So I opted for boysenberry pie a la mode!!!  I heard good reviews of the food all around, which we already knew since the place was packed!!! 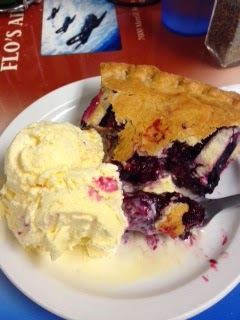 Upon arrival, most of the hangars were sparsely decorated with planes ... they were all out on the flight line taking a few runs in preparation for the show.  Of course you already know I DON'T know the names of planes ... and since these are not really museum pieces, there are no signs on most of them so I can relay the info to you. This small helicopter was sitting on top of a building ... just waiting for someone to restore her. 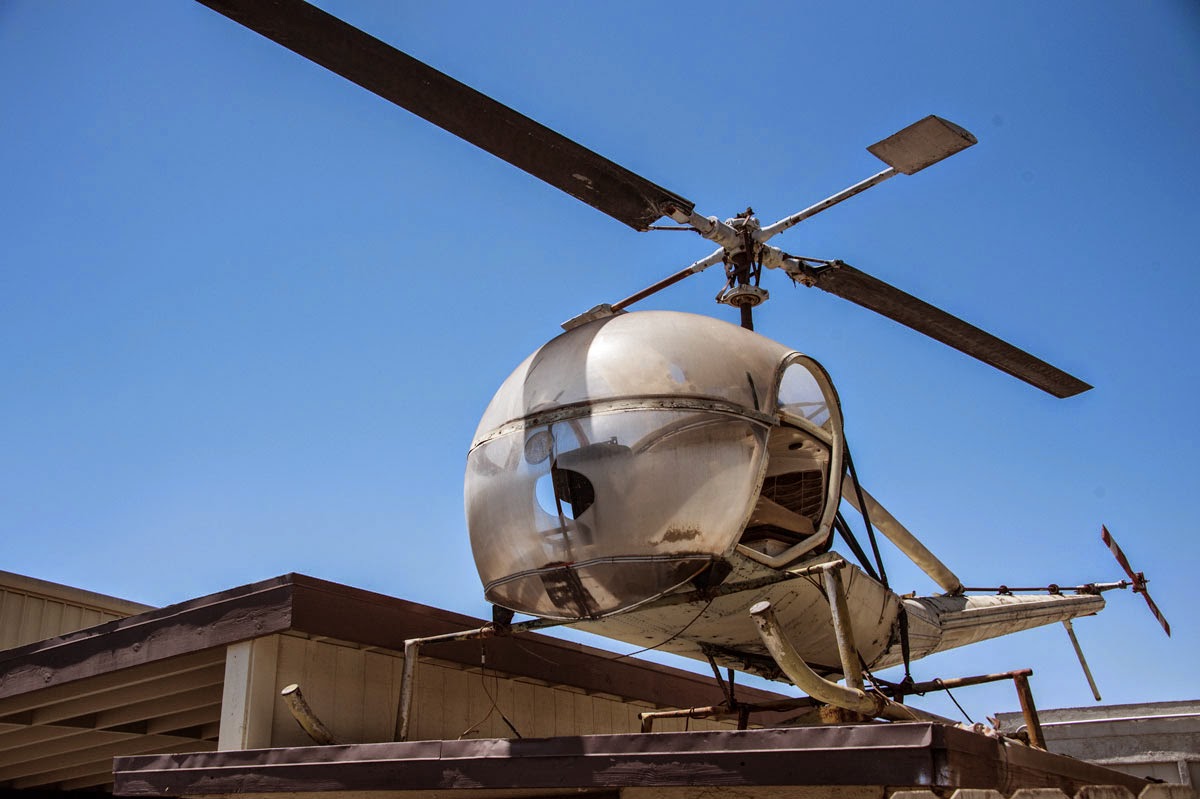 Okay, I'm going to take a big guess here ... P38???  Only because it looks like the planes I saw racing in Reno many years ago.  Dolly is a real looker!!! 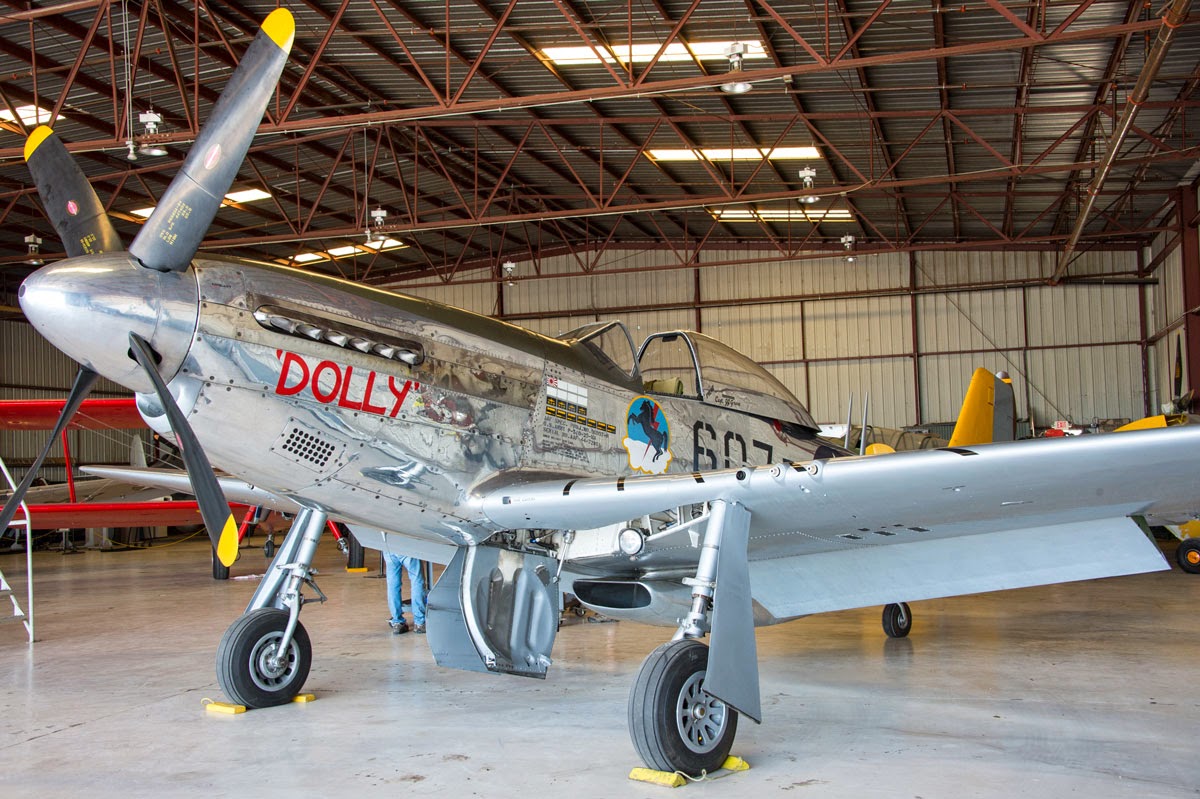 Outside were several jets in all stages of disrepair ... a static display.  I would have had more images, but it was VERY HOT and the sun really beats down here.  With little to no shade, we didn't stay outside very long. 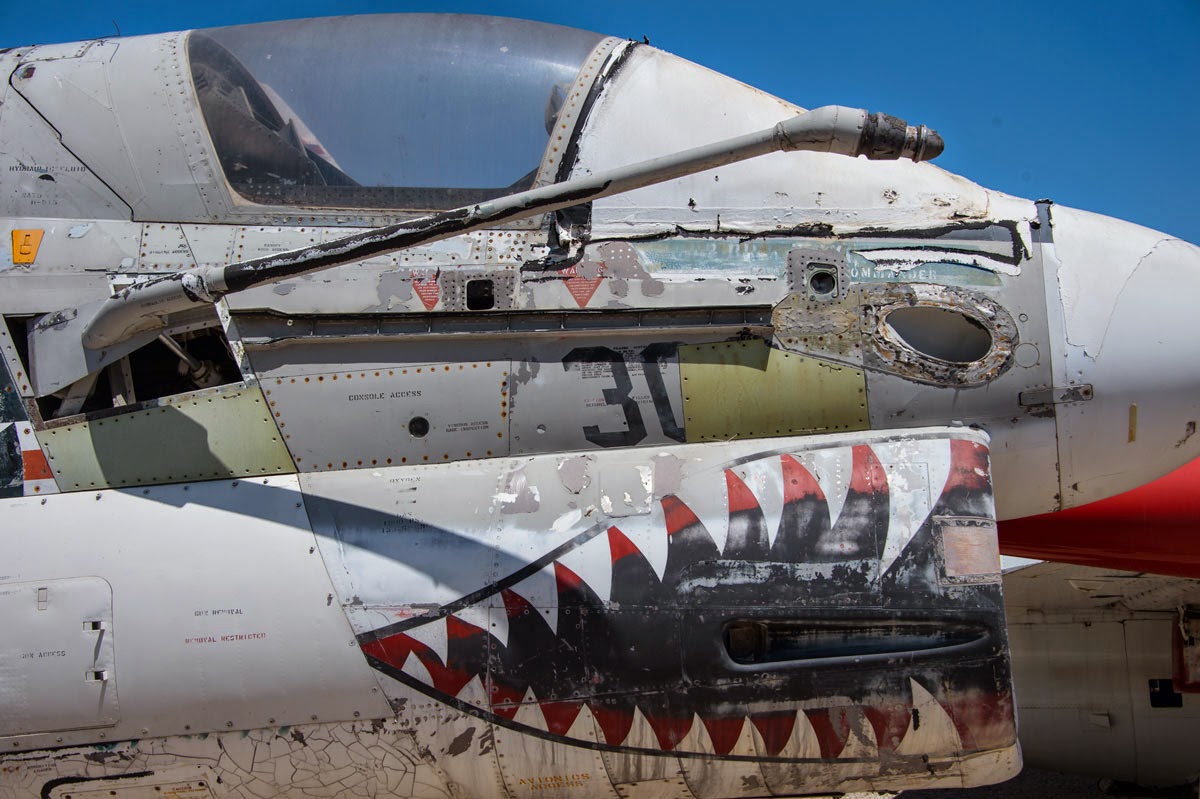 This was an interesting display ... it looked like it was still in the jungle, which was the idea of course.  Terribly corroded and most of the pieces smashed, someone went to a lot of trouble to bring it all the way here. 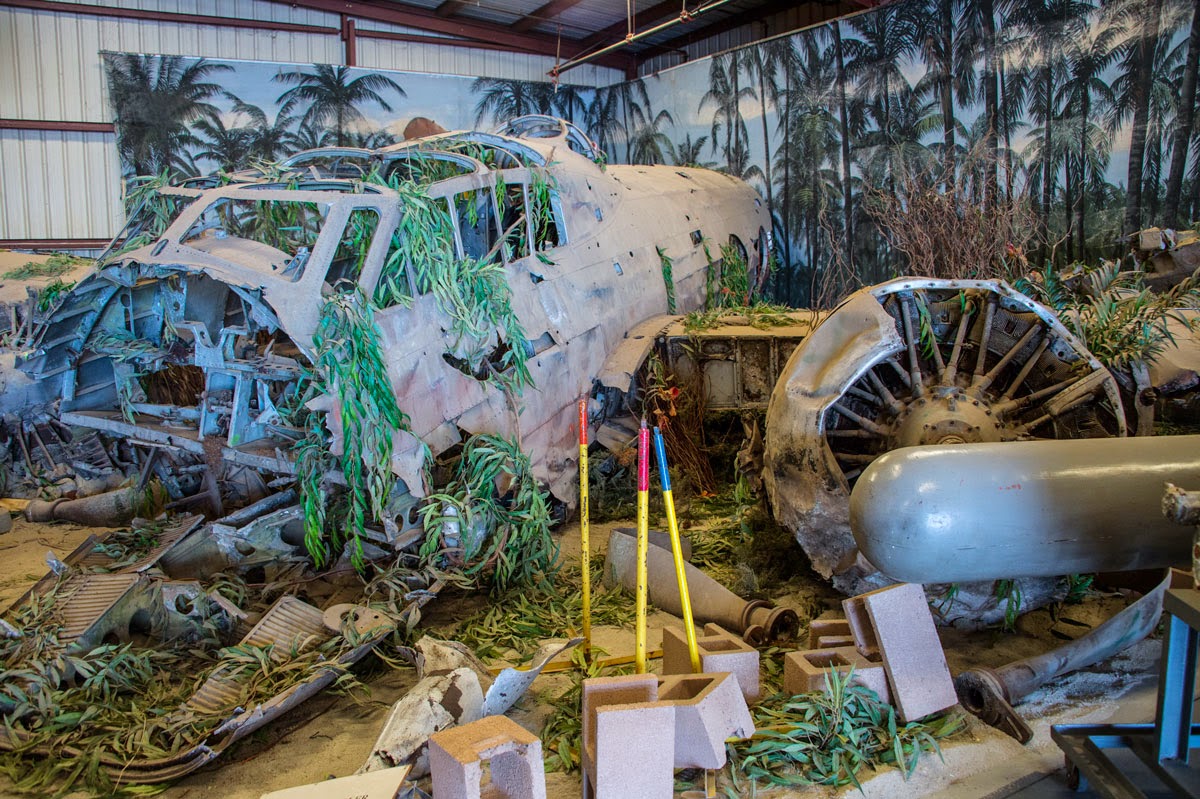 Many planes were in the process of restoration.  WOW ... you would have to like these old planes a LOT in order to do all the work required to bring them up to flying standards.  One had a 55 gallon drum for a "tip" jar with a note saying they needed another $50,000 to complete the repair work. 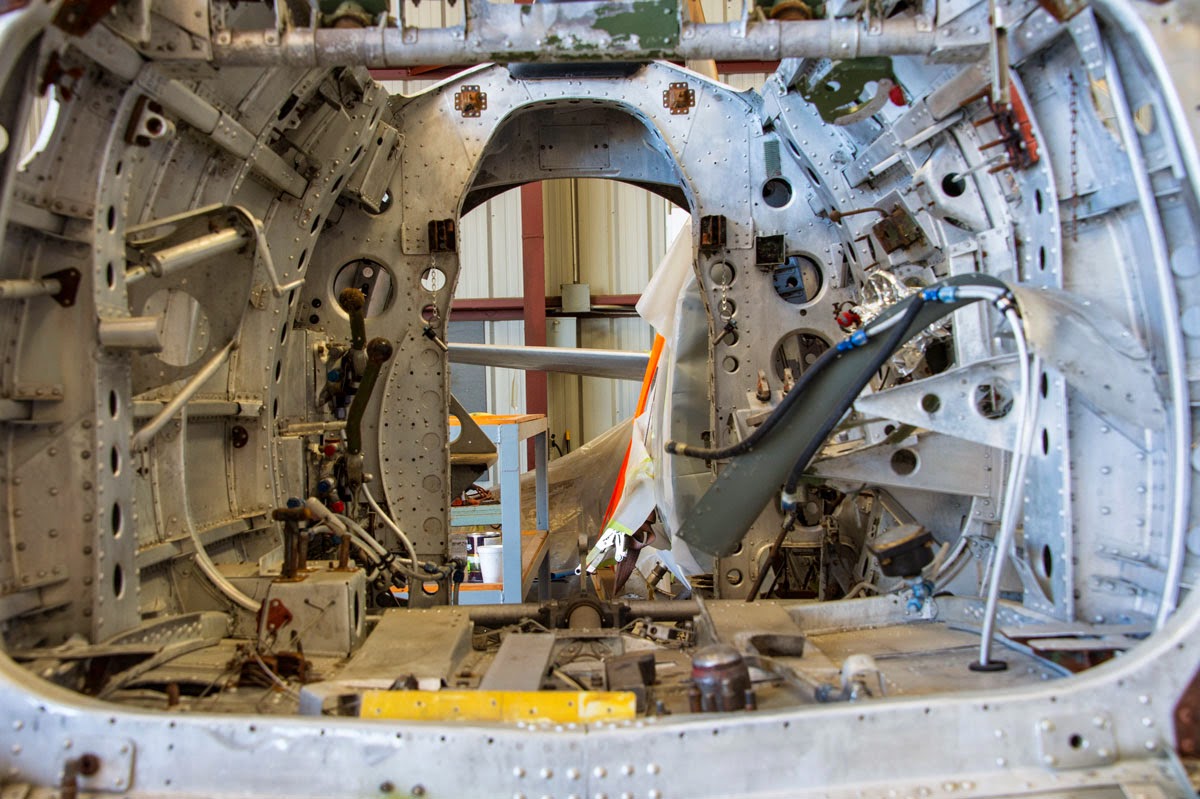 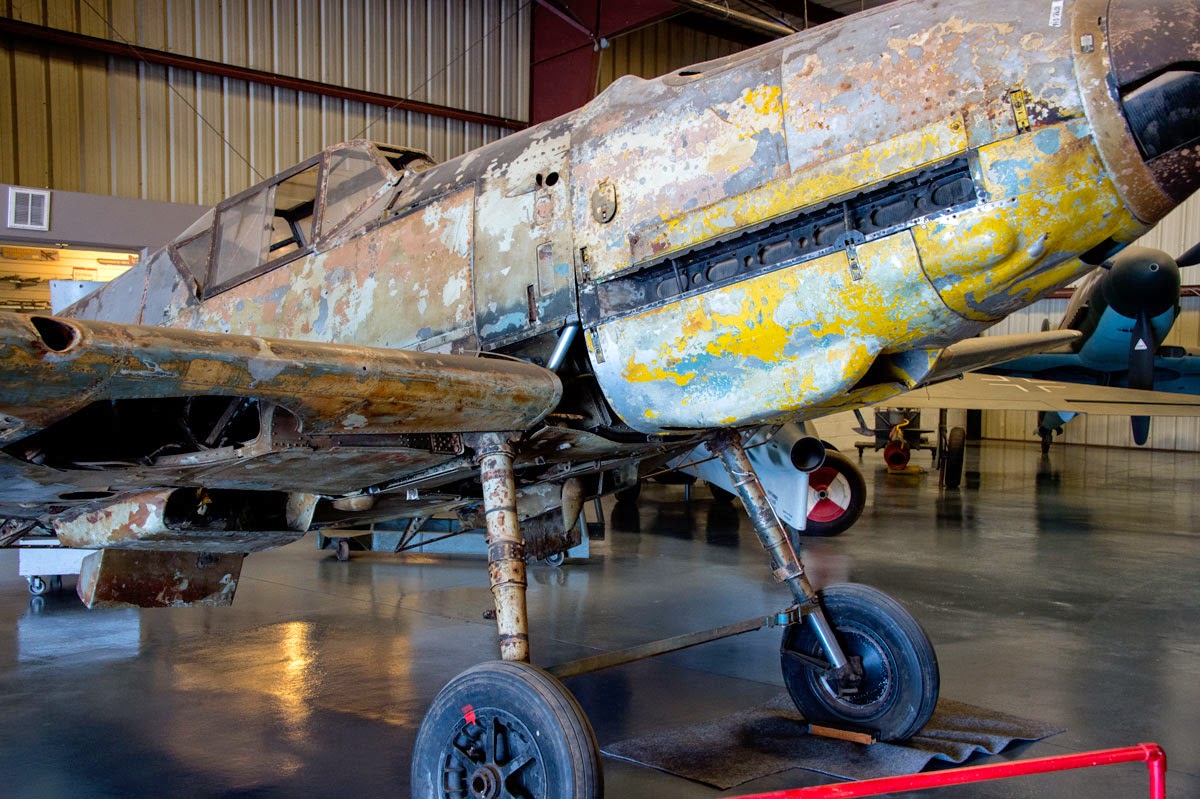 The sign on this building says 475th Fighter Group Lockheed P-38 Lighting.  I used a fish-eye lens to capture the entire plane ... 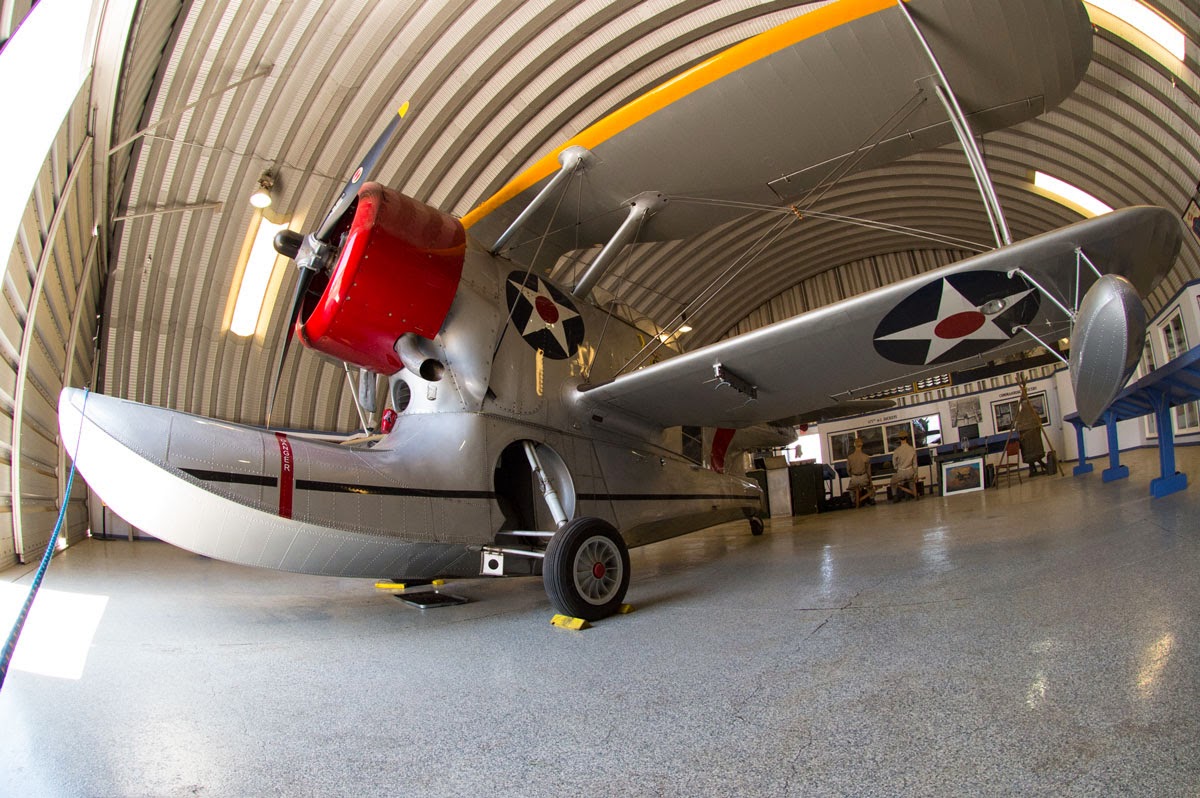 On the back wall, and through all the buildings, were Wings of Honor displays, honoring all those who had donated to the restoration of the planes.  This building also had a display of a kitchen, tin can rations and flight jackets.  Very Cool!!! 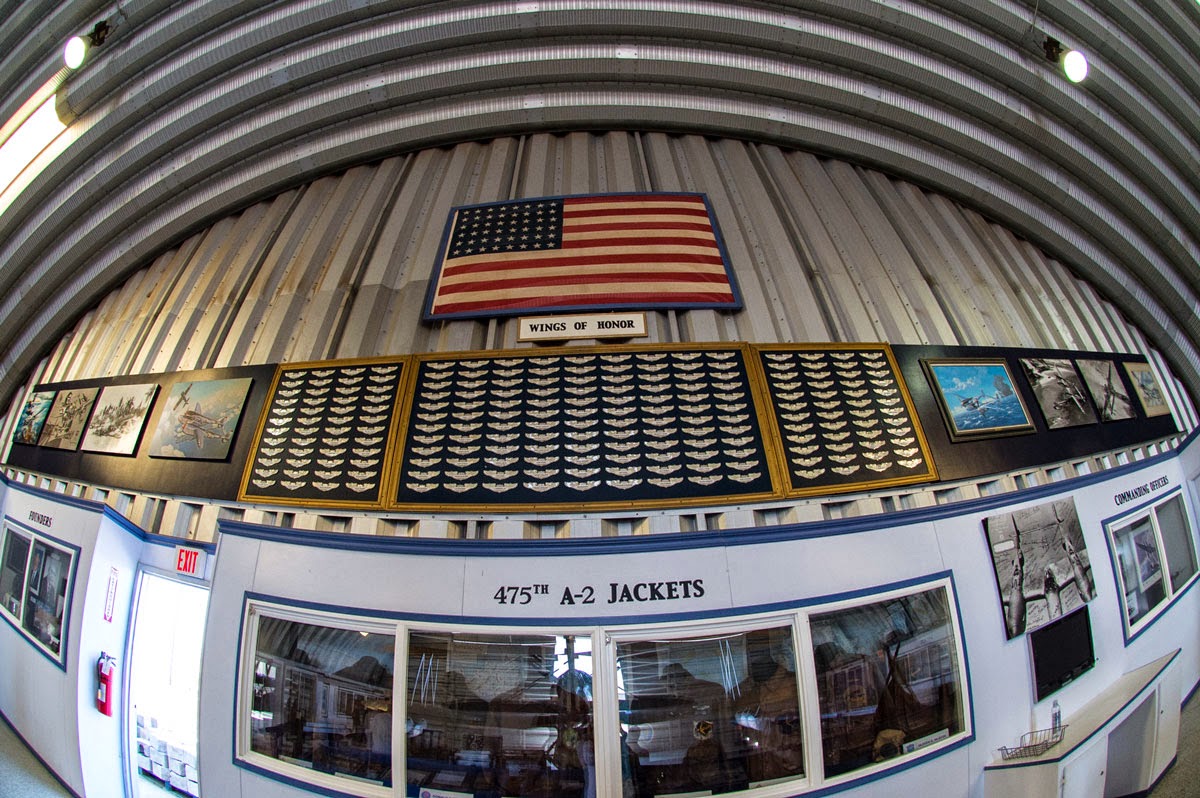 Okay ... brown plane here.  Can anyone help me??  This one parked outside, looked like it was getting ready to fly.  While we were there, several planes were moved to the outside for some flight time.  We didn't take the tram to the flight line, but could see stunt planes flying overhead. 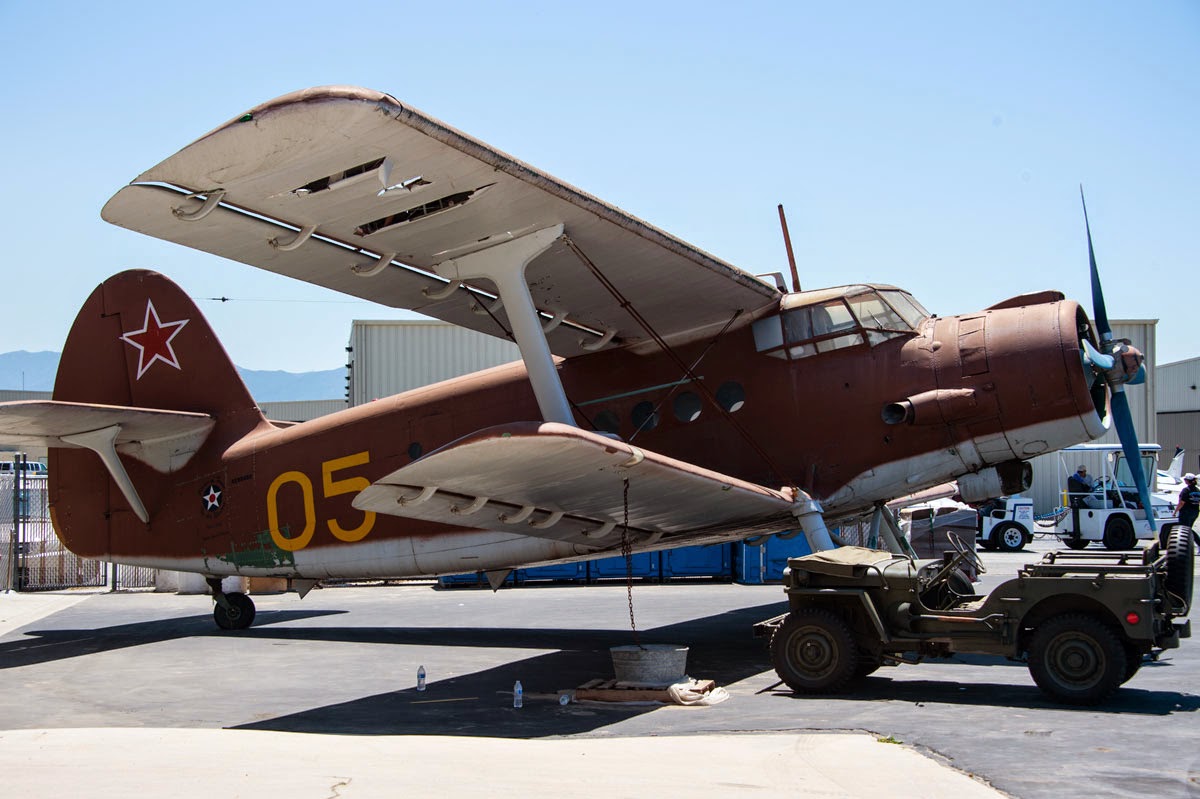 Uhmmmmm silver plane.  I know, I should have asked.  But the guys filling her up with 10 gallons of oil were deep in conversation so I didn't want to bother them!! 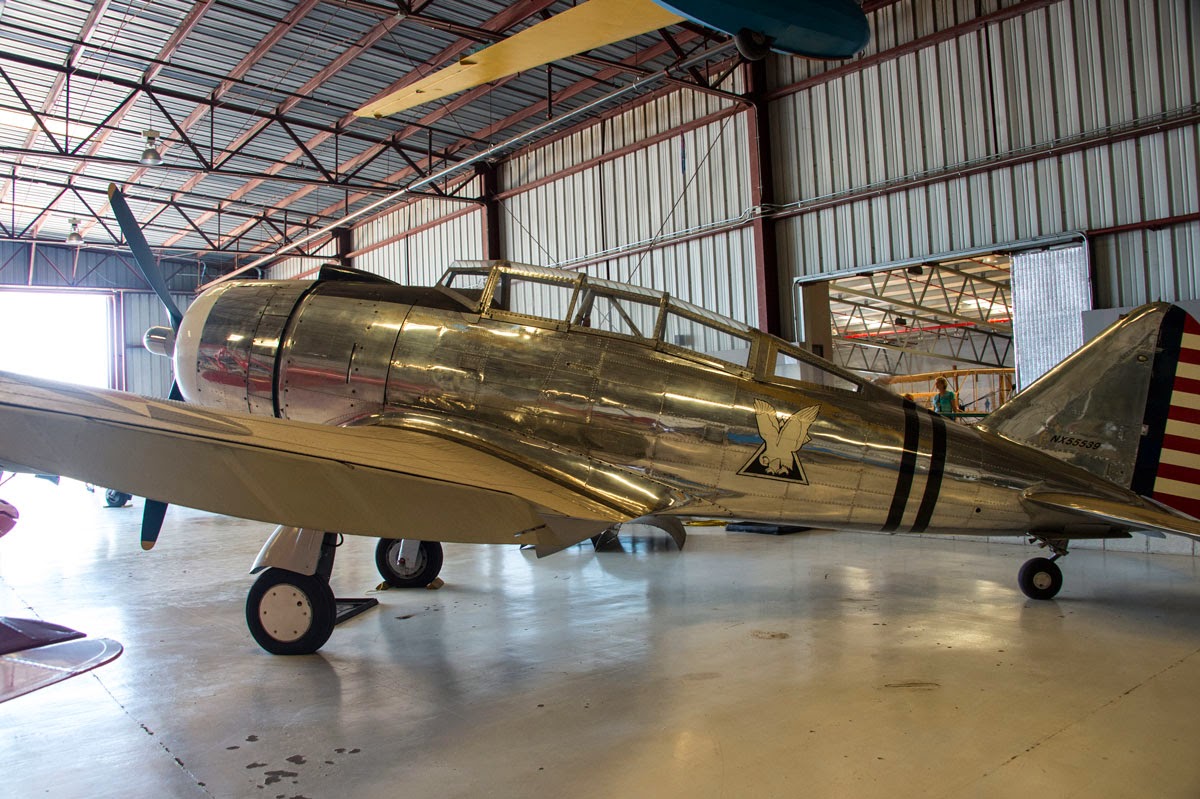 A Japanese Zero ... I can't tell if the yellow lines are lightning or a scarf!!! 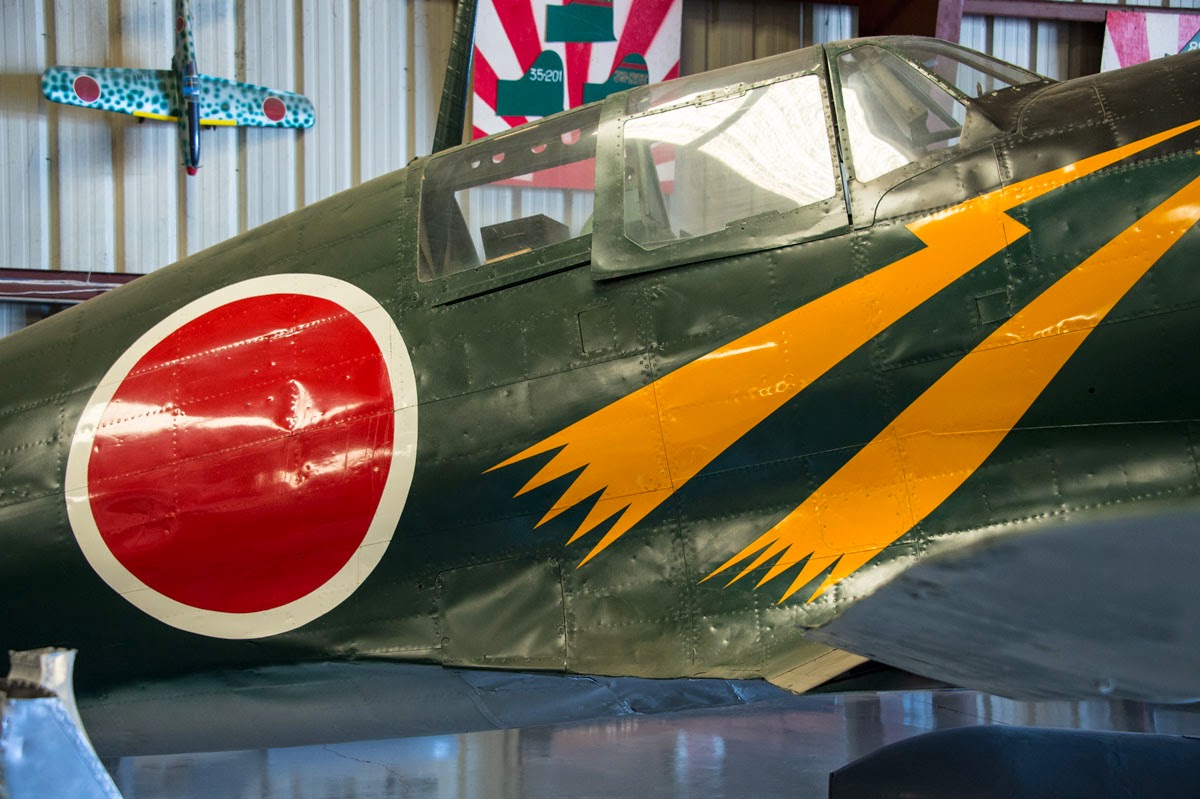 They also had a space capsule display.  It was much bigger than I thought. 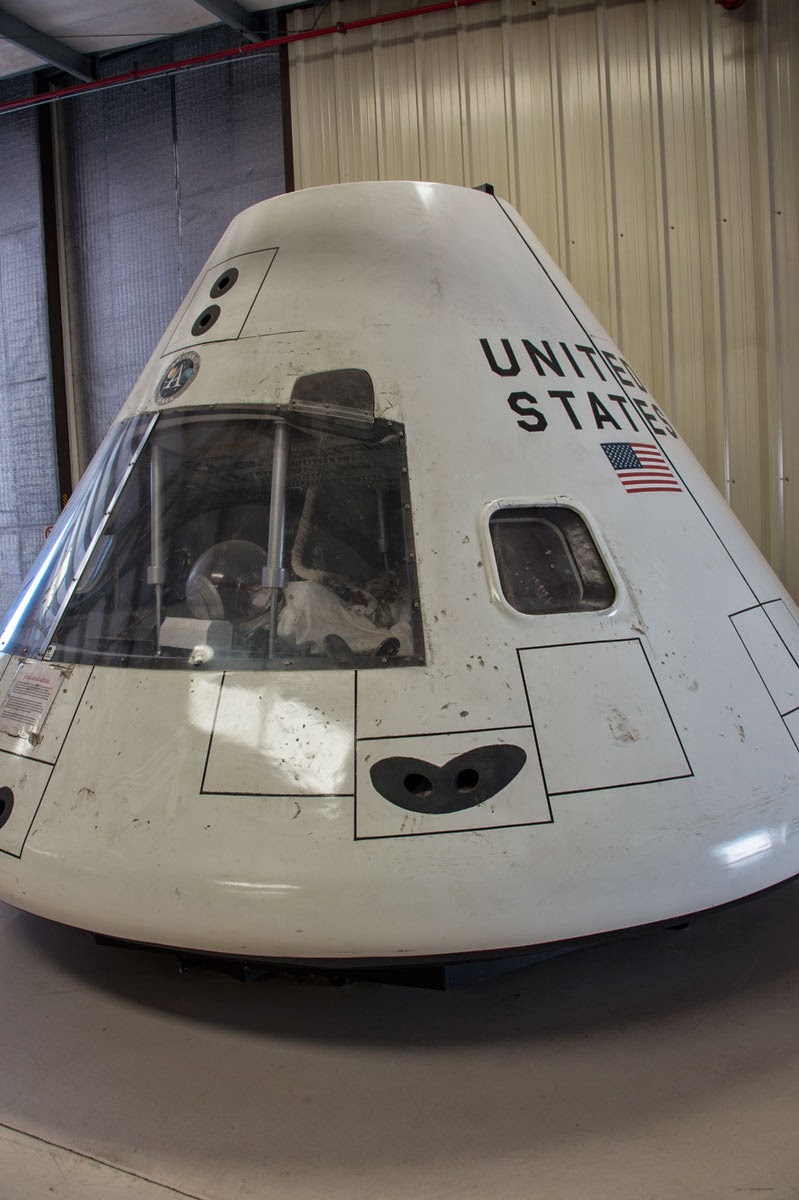 Until I got up close and saw how the three guys would be lying (laying?).  I was so claustrophobic looking inside that I almost didn't get the picture!!! 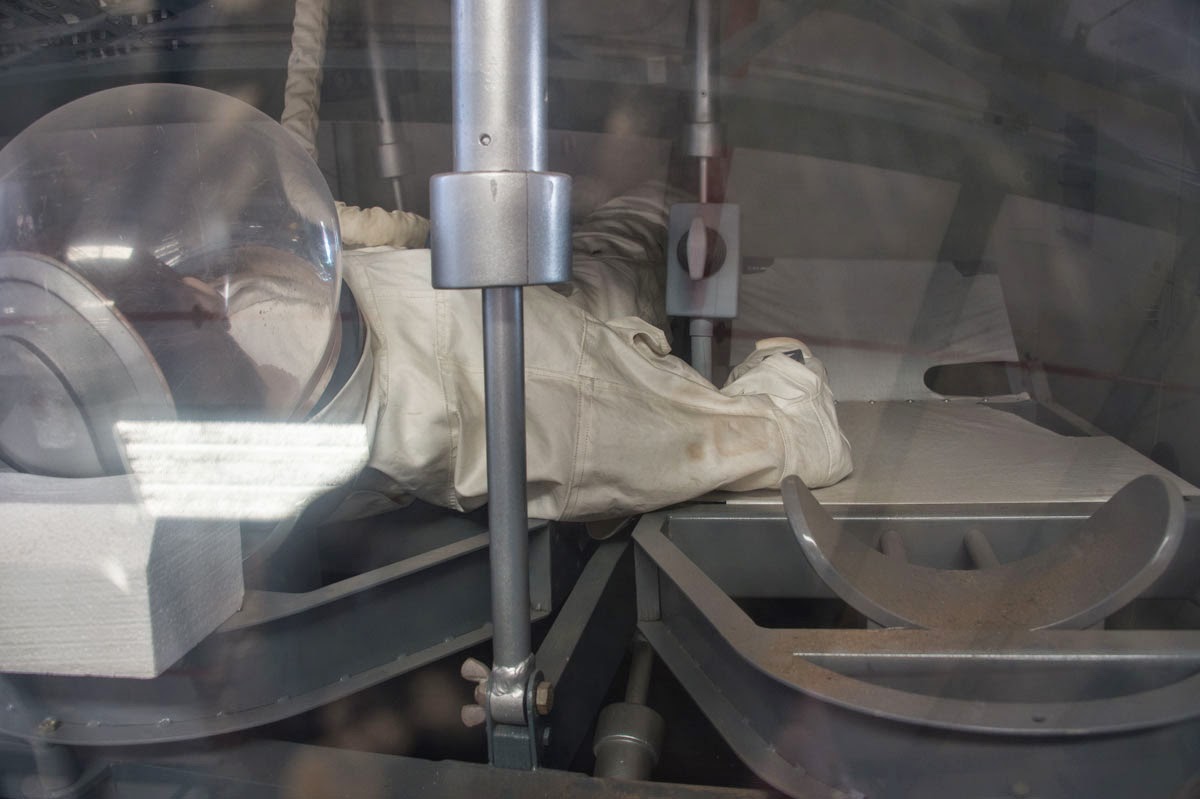 Inside one of the hangars was a beautiful off-white Rolls Royce that I couldn't get a good image of.  There was too much sun coming in the door and too much reflection on the car.  She was a beauty though!! 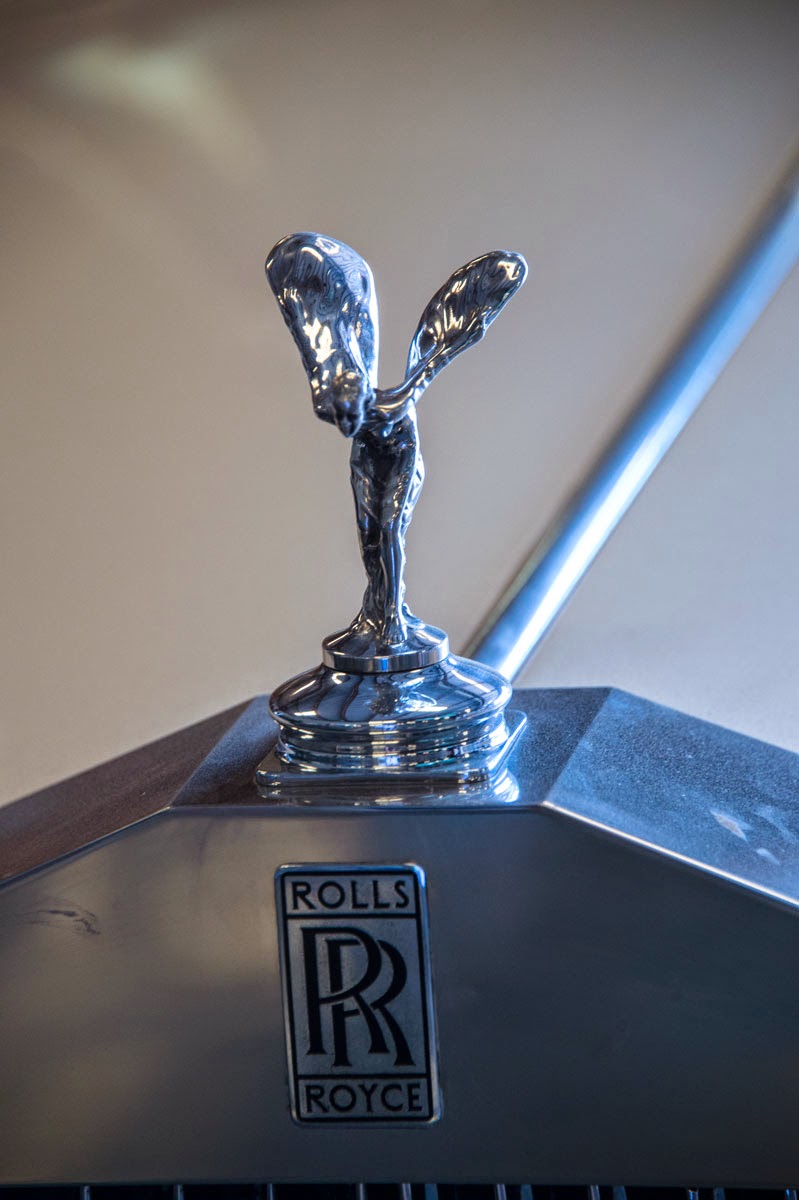 While we wandered around the hangars, the ladies went to a Tea.  When I saw Eloisa (who is parked next to me) I had to run out and ask for a picture.  Isn't she gorgeous???  And I loved her hat!!! 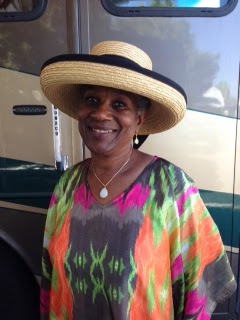 We headed back rather early ... it was just too hot on the tarmac to stay for long.  Back at the RV park, we had an amazing potluck dinner.  On the way back to my rig, I noticed this telephone booth.  Seen one of these lately???  There are none around my area ... they have all been torn down.  A real antique ... and I think it actually works!!! 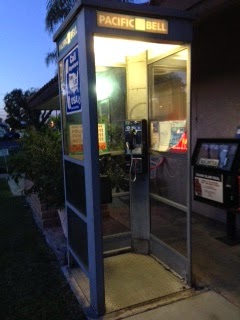 Today everyone is headed to the Rail Fair in Fullerton, then on to San Juan Capistrano for dinner at an old depot.  I can't be gone that long because of my puppies, so I'm going to be the official dog walker and stay here.  Course I may just have a notion of the whereabouts of three yarn stores!!!

Posted by Nancy Kissack at 7:45 AM