The Petrified Forest ... Hard As A Rock!!

The Elks Parking Lot in Winslow Arizona ... the rig on the right is the Midnight Generator dude.  We made a big U-Turn and again pointed the compass East as we went a short way up Hwy 40 to Holbrook. 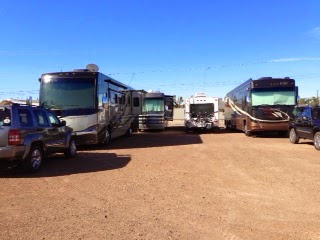 The name of this RV park, a few miles East of Holbrook is Root 66 RV Park.  When you see these pictures, you might not want to stay here ... but looks aren't everything.  We were met by a lovely Indian woman who checked us in at $16 a night, full hookup.  The power seems fine, but after talking to a local, I'm not hooking up the water.  They have a laundry room and it's a short distance to the Petrified Forest.  The best part is probably 20 square miles of dog walk ... just look out for snakes AND the AT&T tower is 100 yards away.  Sprint and ATT work GREAT!! 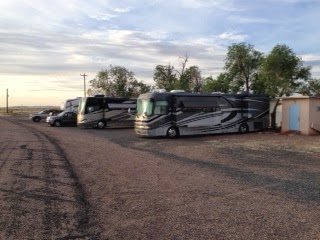 It's actually an old abandoned Hotel on Route 66, turned into an RV park, which is for sale in case you're looking for that perfect investment!!  Come on ... it's the Route 66 ambience!!! 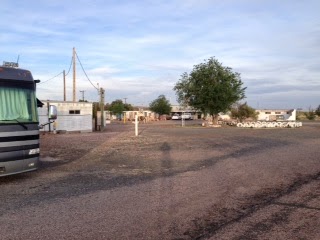 Unfortunately for me, it's located about 50 yards from Hwy 40.  This time it was sleeping pill, earplugs and a pillow over my head.  I'm sure somewhere down the road I'll just collapse from exhaustion and sleep more than a couple of hours!!! 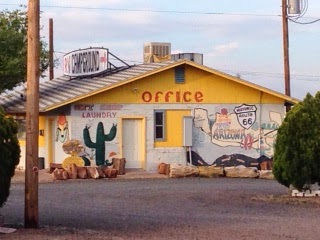 Immediately we left for the petrified forest.  In the Triassic age (225 million years ago) this area was a jungle kind of marshy landscape.  Eventually the trees fell into the marshy mud.  Tectonic plates lifted this area up and eventual erosion uncovered this spectacular destination full of trees that are now rocks ... beautiful rocks!! 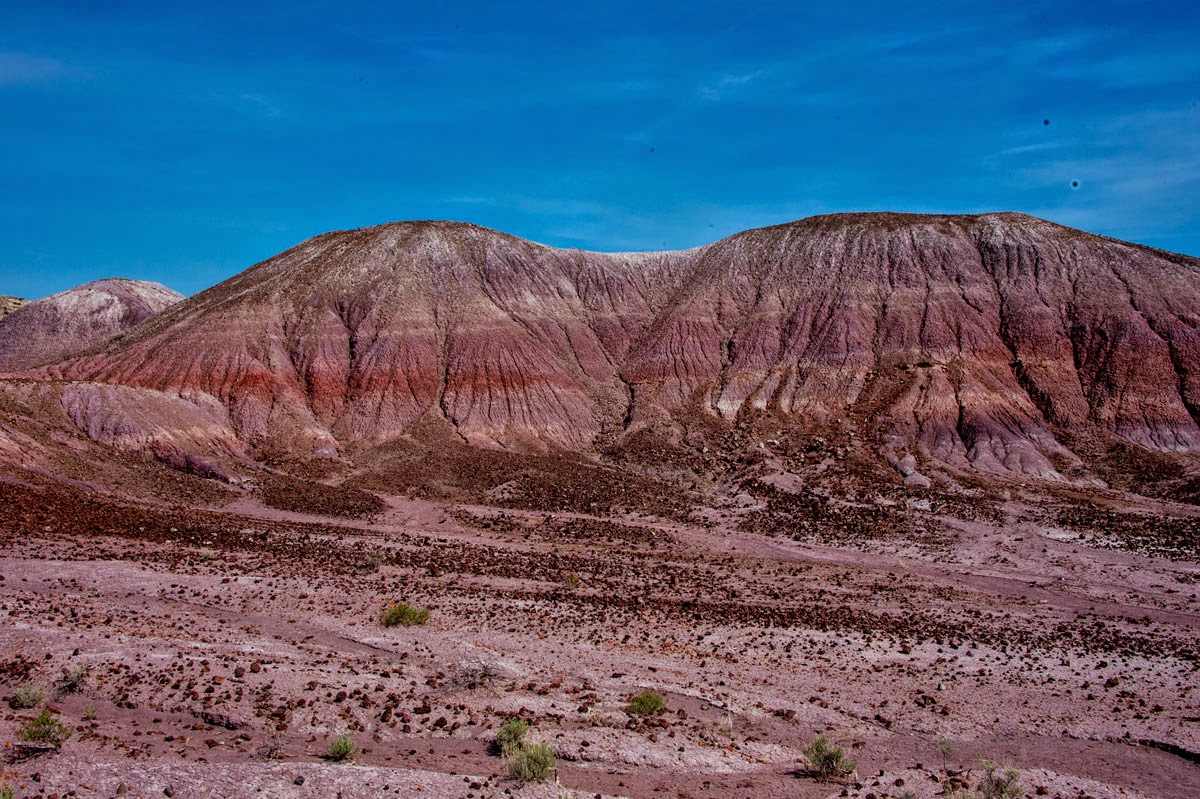 You can easily see the layers of silt, ash and dirt that has eroded away, leaving these teepee-looking mountains.  It's pretty neat seeing what Mother Nature can do. 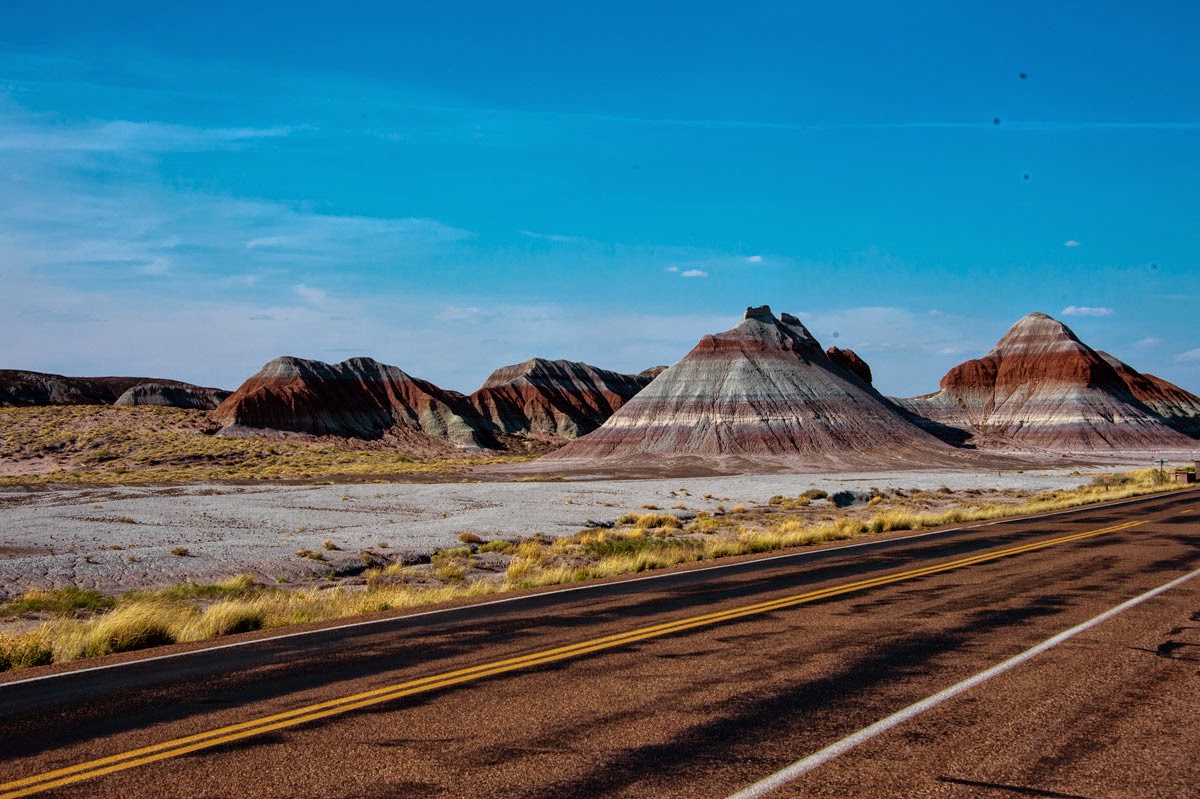 As you are driving and walking through this area, don't pick up any petrified wood.  You'll die a horrible death and your kids will have to return it to the National Park office.  It really is tempting to pick up a piece or two because it's colors are so amazing ... but instead go to Jim Gray's Petrified Wood Company on Hwy 180 in Holbrook and buy a piece. 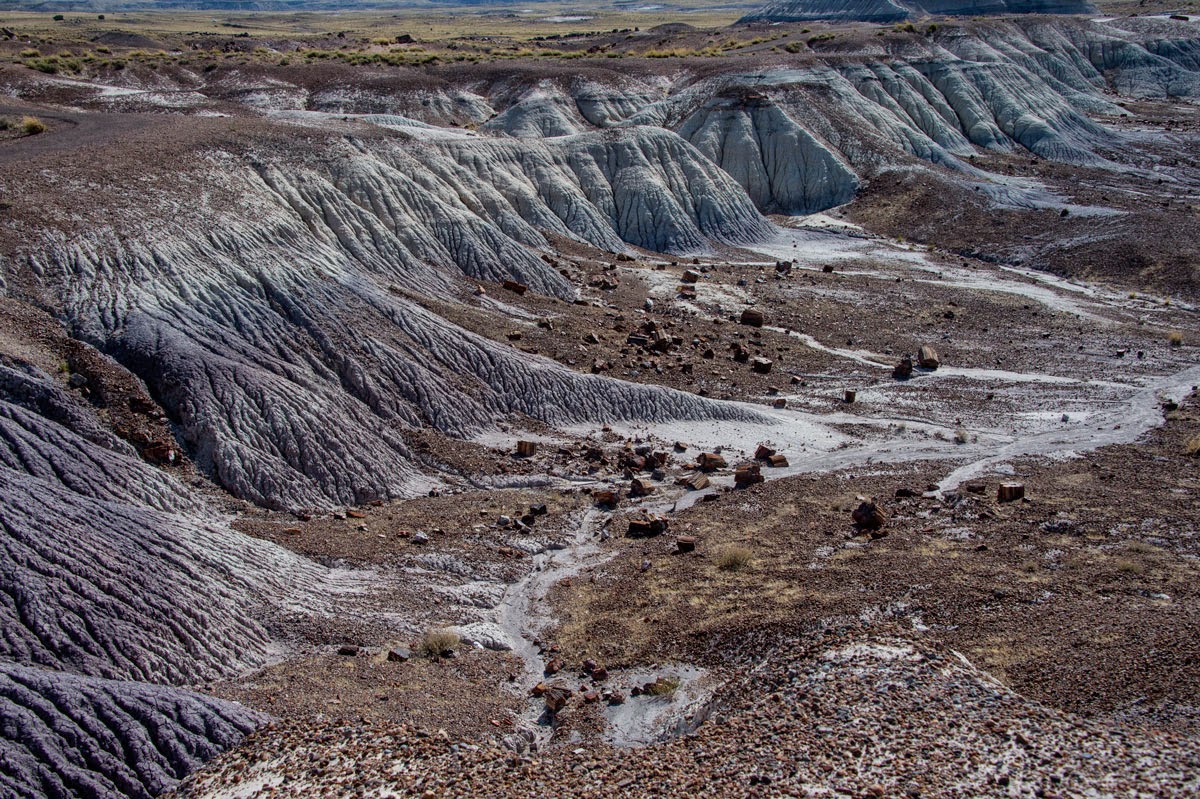 As the trees are uncovered, they break apart ... like someone cut them with a chainsaw.  The minerals present in the mud and the type of tree determine the color and look of the wood/rock. 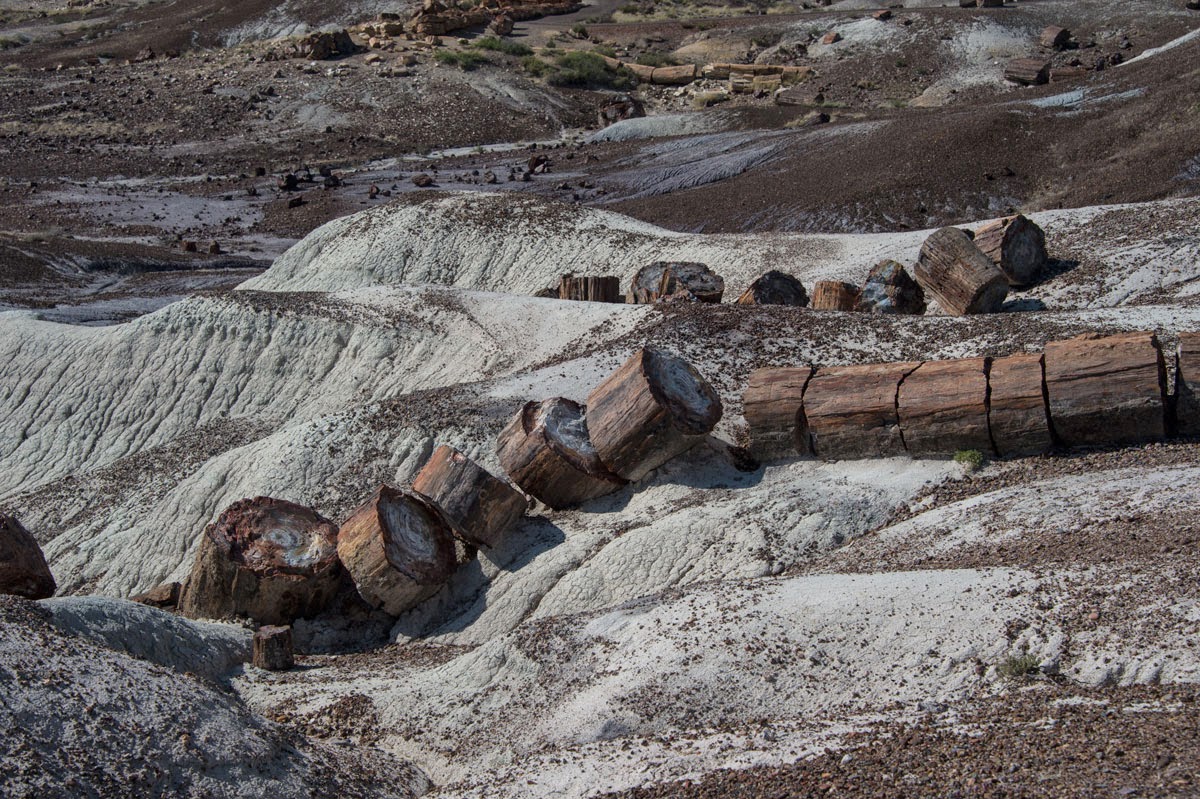 This is actually called Crystal Forest ... and you can see why. 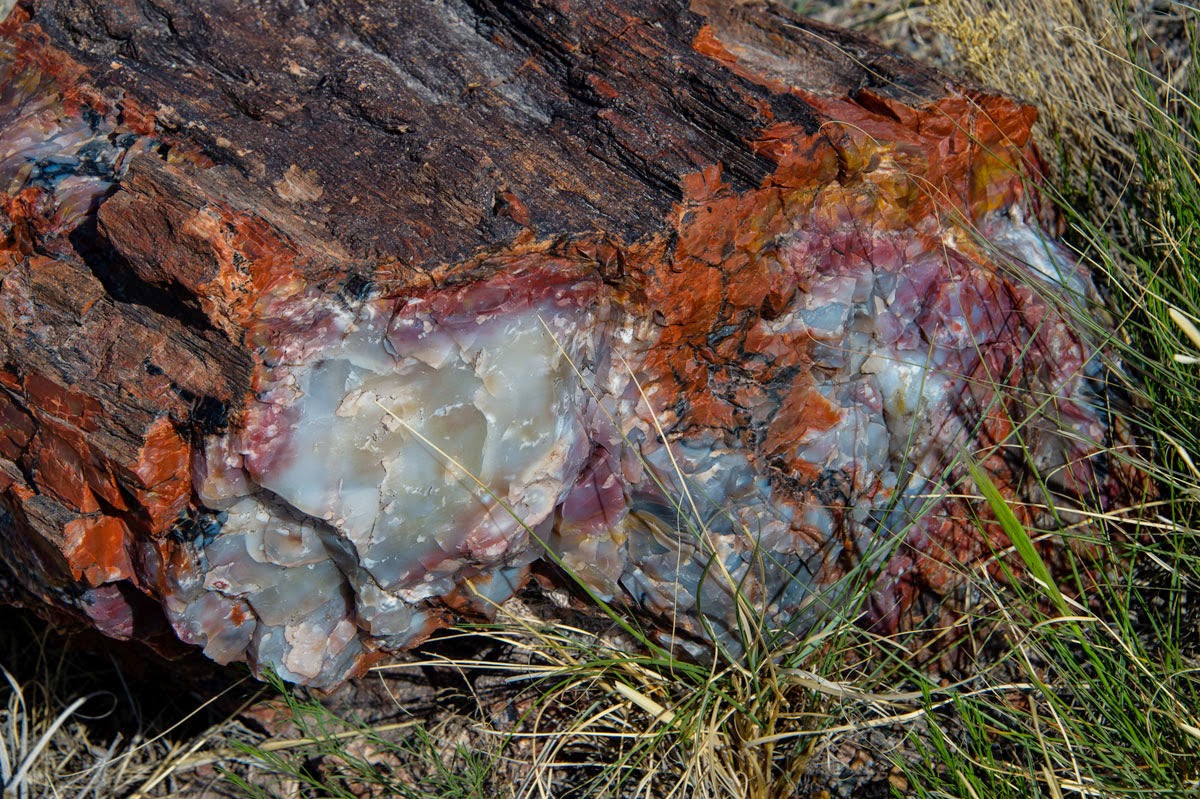 A little further along is Newspaper Rock.  Not exactly easy to see from way up on the top of the cliff. This area was where the local Indians left messages for each other ... find water here ... meet me at the river ... I passed by here on this day ... my mother-in-law can't cook ... 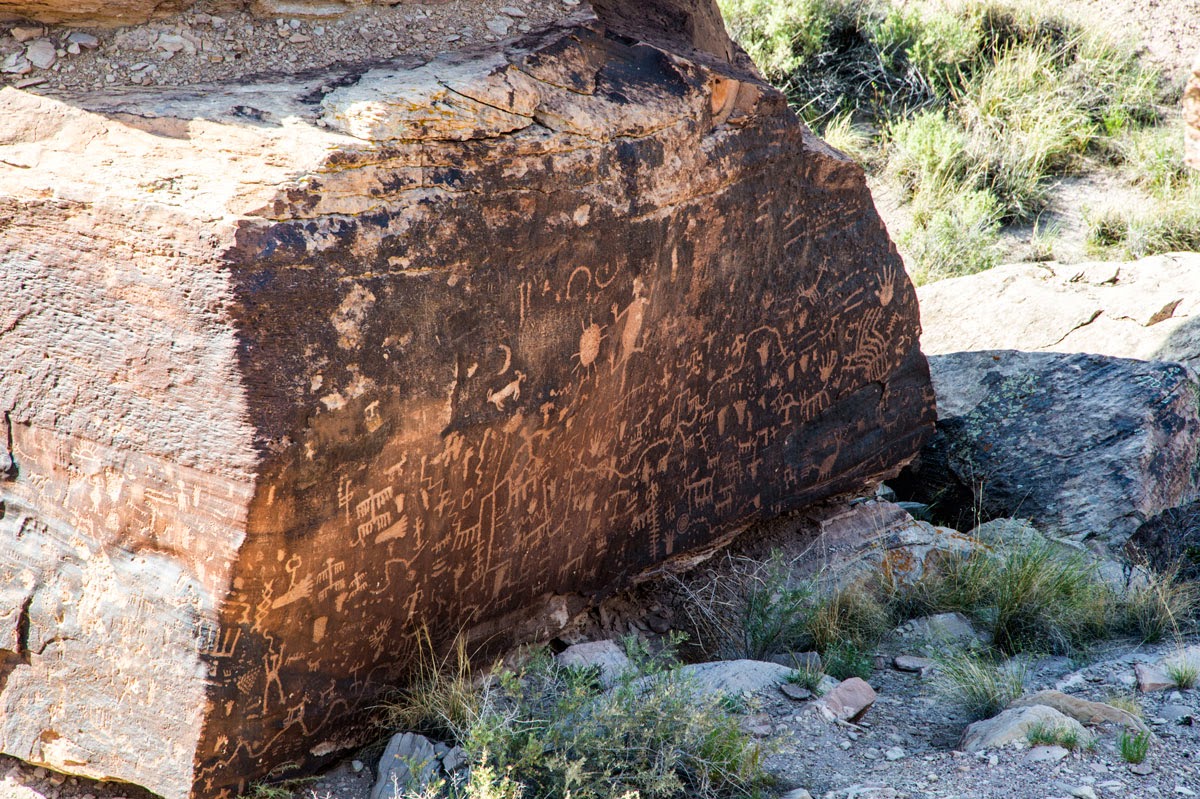 These bulletin boards were once at the top of the cliff ... but through erosion and ground movement, have ended up at the bottom of the gully where you are NOT allowed to go.  Bring a telephoto camera lens, your binoculars or just use the bad telescopes that have on site for you that you really can't see out of.  It's the Park Service ... remember they are broke!!!  You can sign up for a nature walk with a Ranger ... about a 2 mile hike in soft sand and desert heat.  I passed on that one. 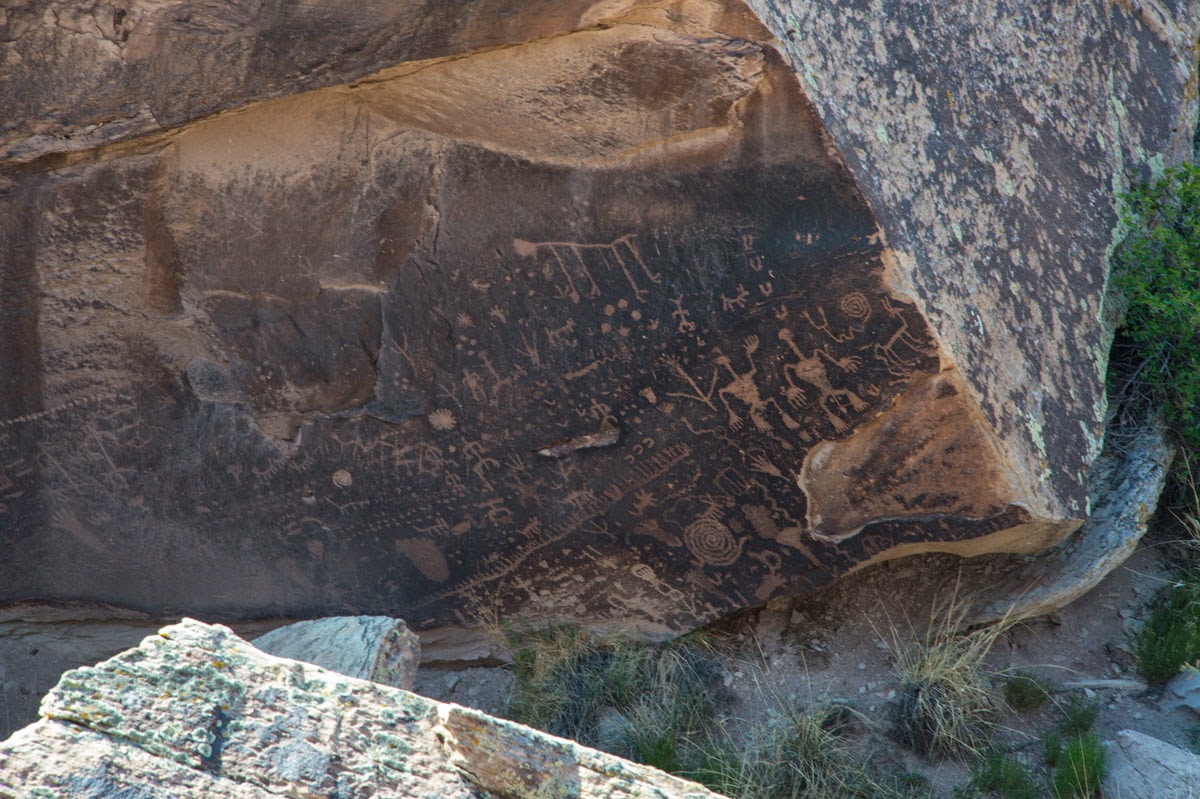 As we crossed the train trestle, Barbara said it would be neat if a train came by.  Tom said just wait a minute ... and like magic ... here came the train!!!  My first chance to be a foamer!!!  He blew his horn for us as we snapped away. 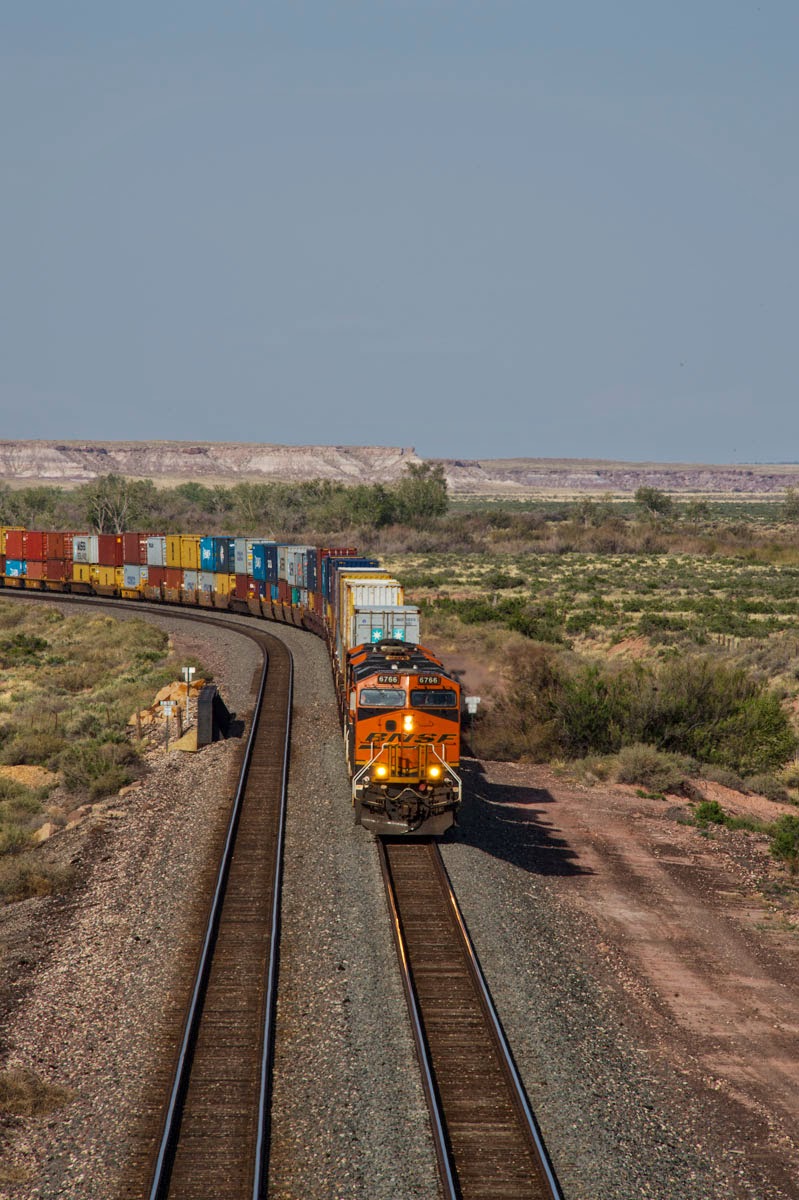 This was a LONG train ... I'm sure over 100 cars loaded to the brim with double containers!!  Three engines up front and two pushing behind. 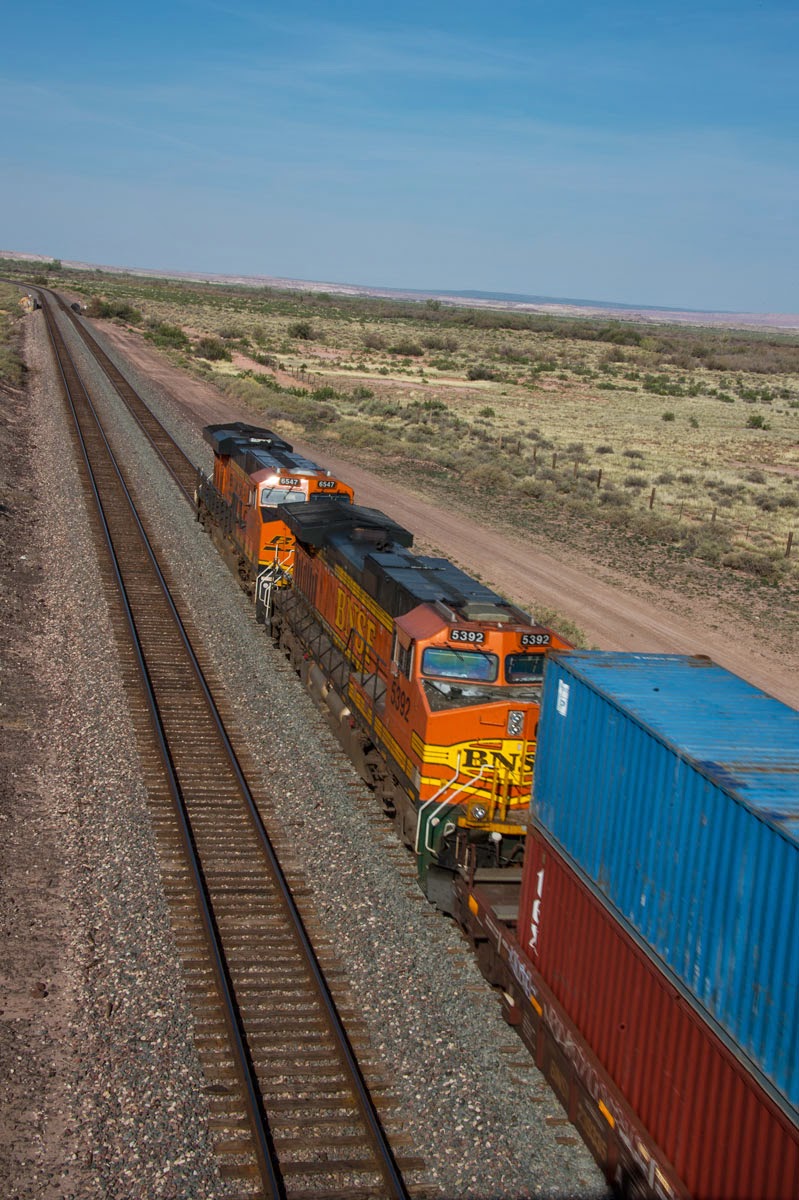 As we crossed over Hwy 40 heading to the northern part of the park, there is a monument of sorts to Route 66.  You can see a very long depression outlined on one side by the old telephone poles that followed the route.  The turquoise on the fender that you really can't see is Larry the Lizard.  He joined up with our little group here and you may see him along the way. 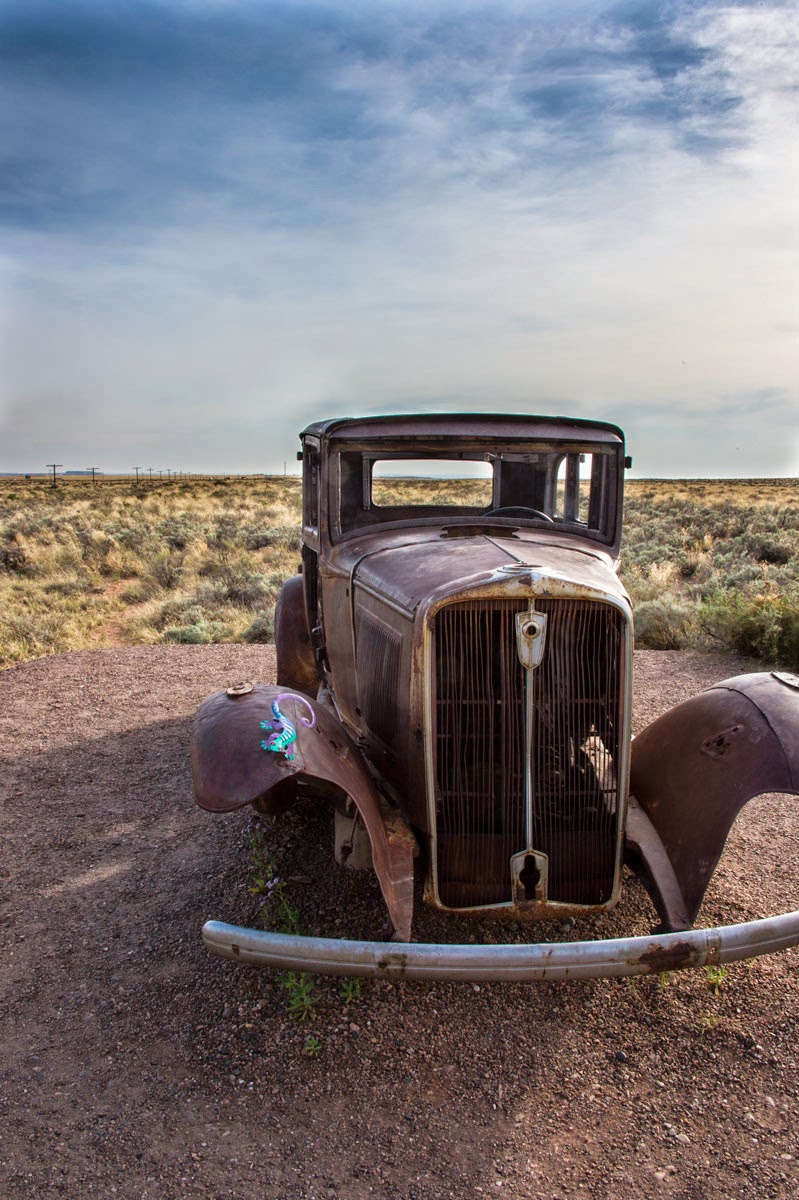 I love Tom's tie-dye shirt ... no matter where Barbara and I were, we could always spot him!!! 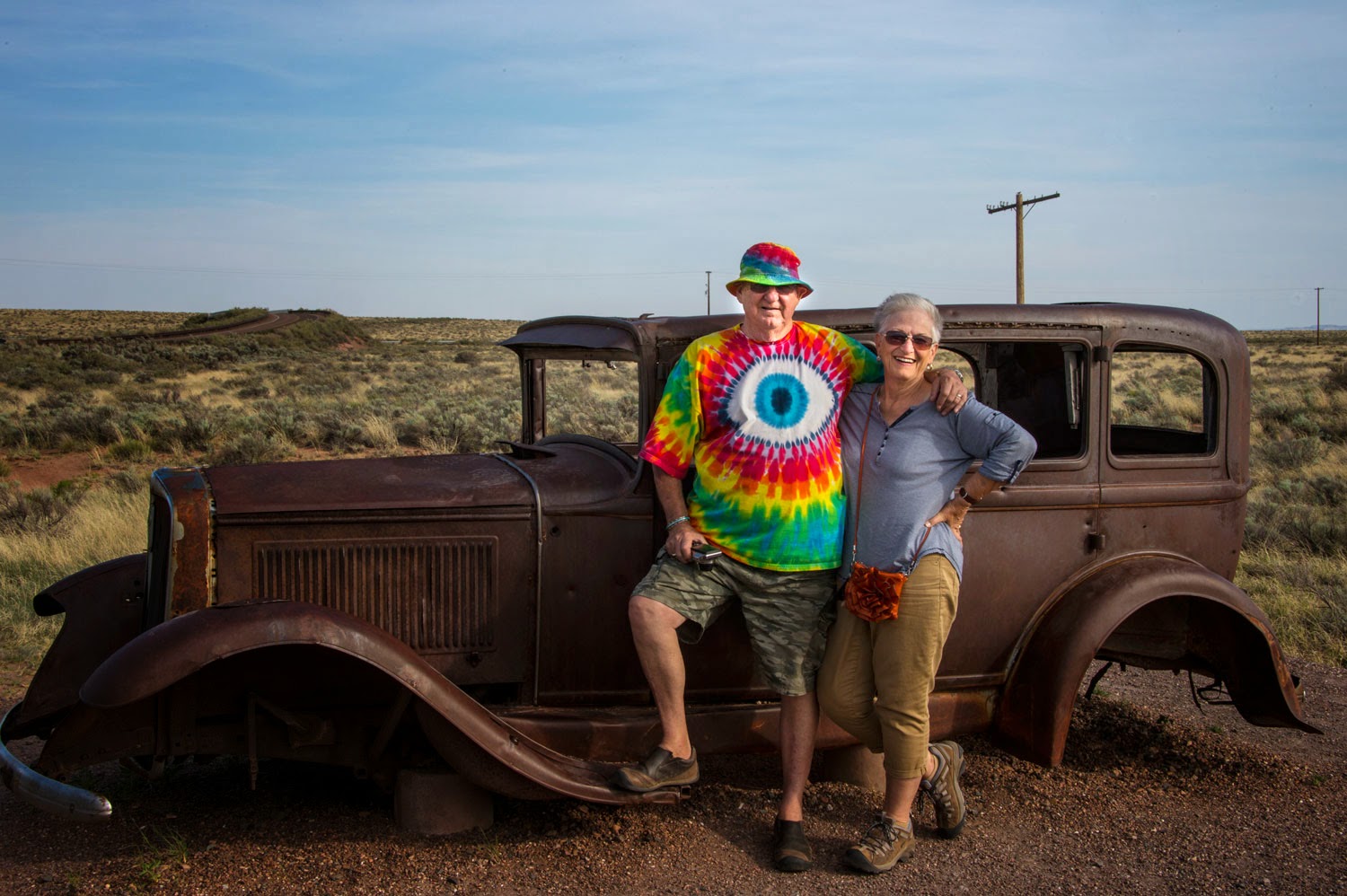 Barbara's new phone is a keeper.  As she took this picture, she said it worked better than her camera ... which was going to be relegated to the closet!! 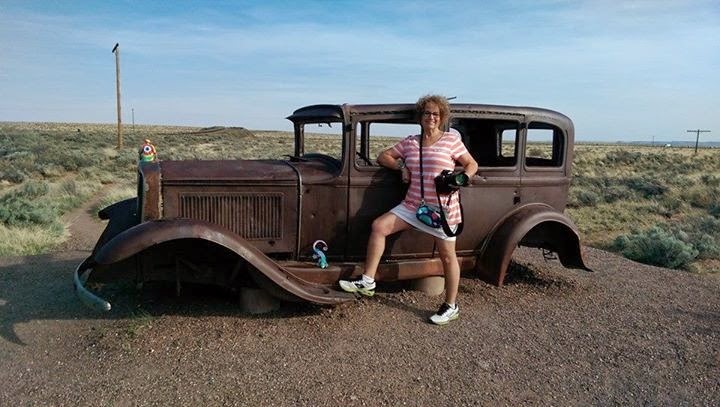 The north end of the Petrified Forest is actually the southern end of the painted desert.  There are several pull-outs where you can ooh and ahh at the beautiful landscape!!  If you complete the loop, there is a great museum at the exit of the park. 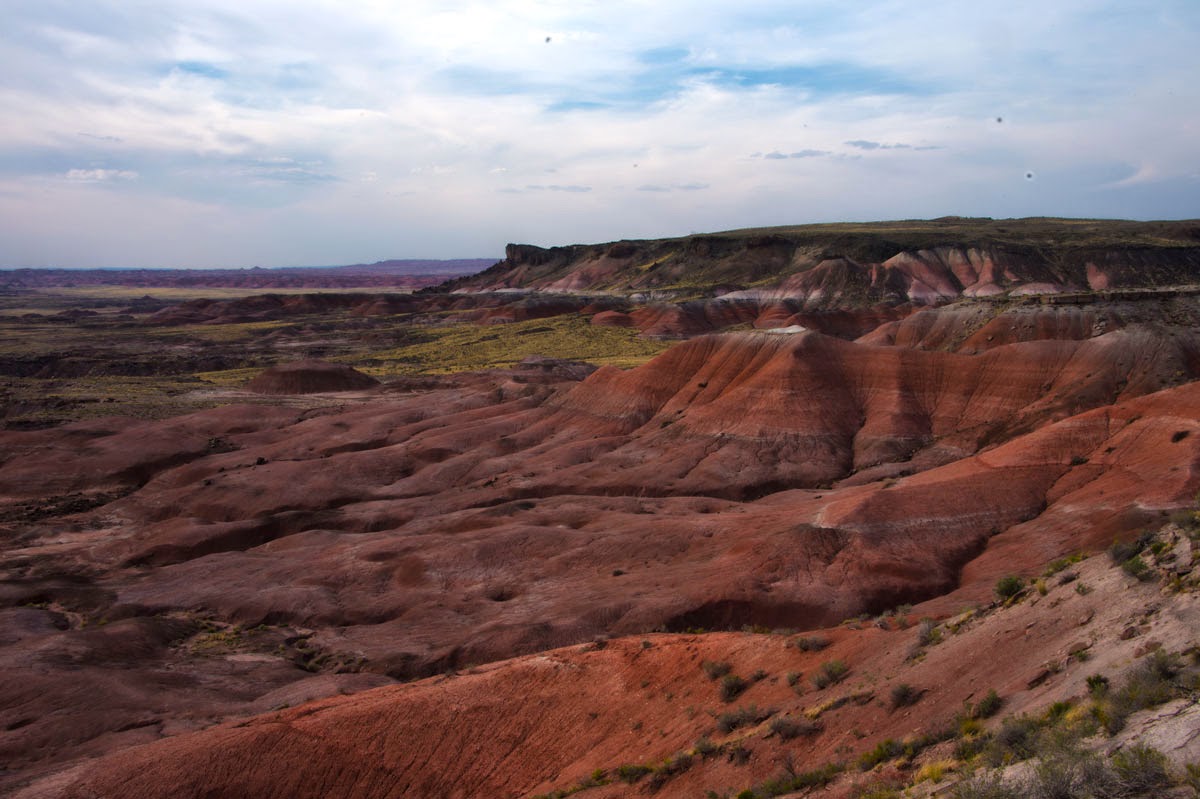 After much discussion, we picked a Mexican Restaurant for dinner, drove approximately 8-9 miles, only to find it out of business.  A YELP reconnoiter found us at Aliberto's Mexican Food.  Don't bother.  Just drive around and stop at the place with the most cars out front!!

Today we return to the Petrified Forest Museum and gift shop ... you never know, we might find the FIND of the trip!!!

Posted by Nancy Kissack at 6:35 AM