Not necessarily in that order ... what an "interesting" day this was!  When we headed south according to Barbara's GPS, I was a little surprised when it said "turn right on dirt road"!!!  By the third turn on to a canal bank, I asked if this Jeep had 4-wheel drive.  I seriously can't believe they geo-cache OUT HERE!!!  With a gas plant belching smoke and steam not a half mile away, she pulled over and got out.  What in the world could there be to see here???  Mudpots!!  But we're not in Yellowstone National Park!  We are at the Southeast end of the Salton Sea.  These mud pots are caused by gas coming up through the earths crust, bringing mud with it ... except it's cool, not boiling. 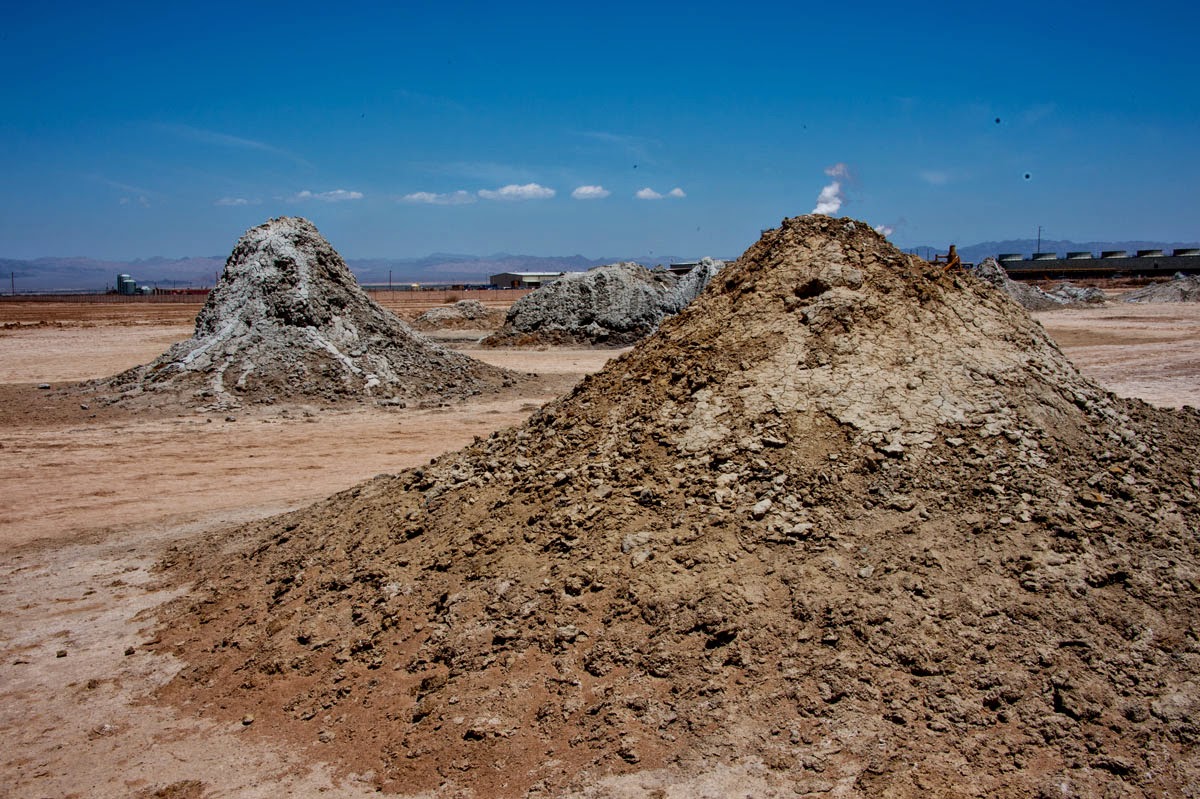 Not always in the same spot, they die down, dissolve into the dirt and start up twenty feet away.  Pretty strange!!! 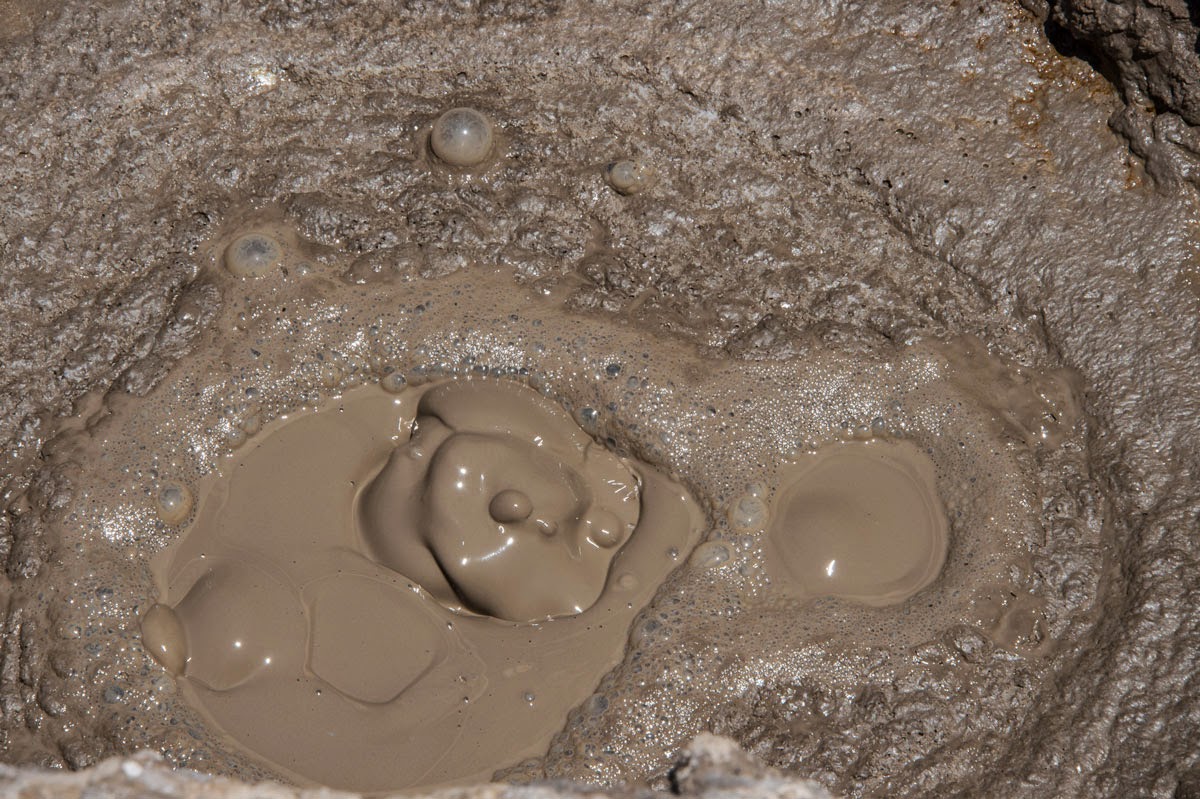 This hole was about 4 inches wide, with mud belching and bubbling out and down the side.  It sounded like someone with a bad stomach ache!! 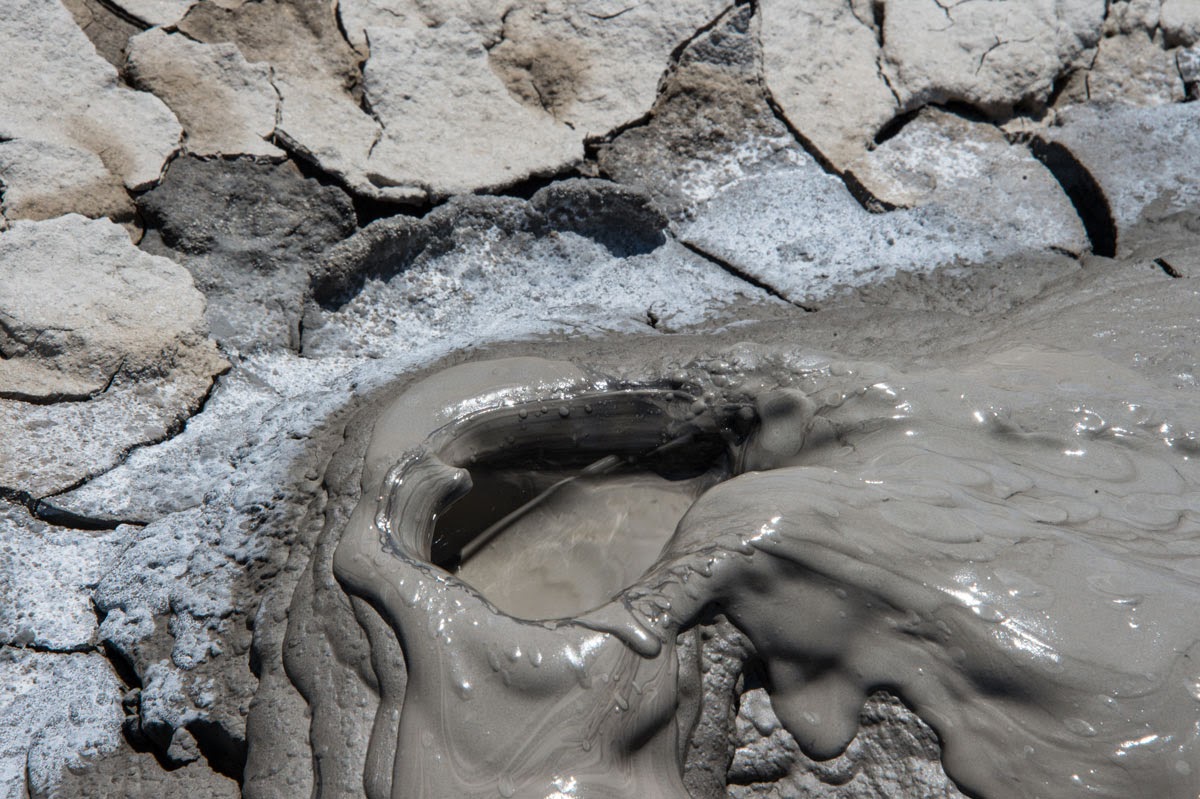 Here's an older one that has dried up ... it looks like the hill threw up!!!  There were about 10 in all, weird I thought ... just weird.  Little did I know what was coming next!! 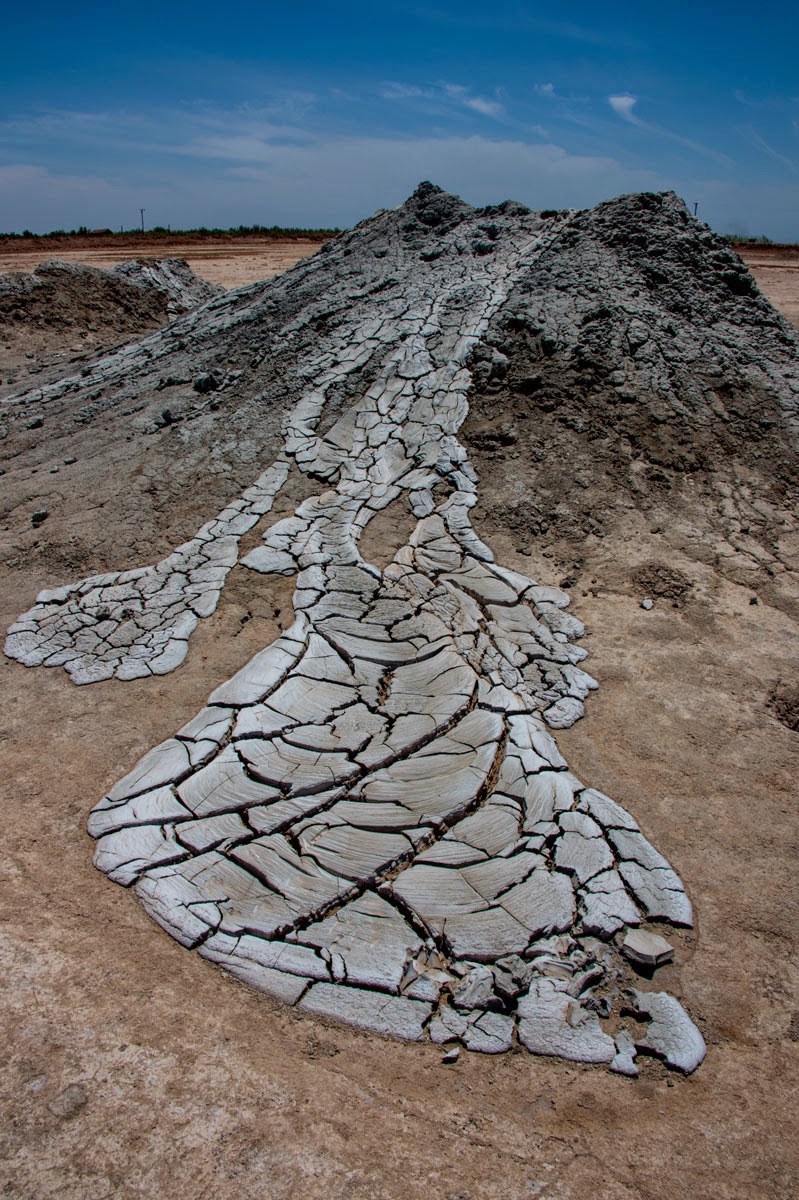 THIS is Salvation Mountain.  Built by Leonard Knight who passed away recently, it was a labor of love.  Got old paint you want to get rid of??  Bring it here.  The local Art Society is trying to keep it going ... and anyone can volunteer their time to come and paint over the paint to keep it intact. 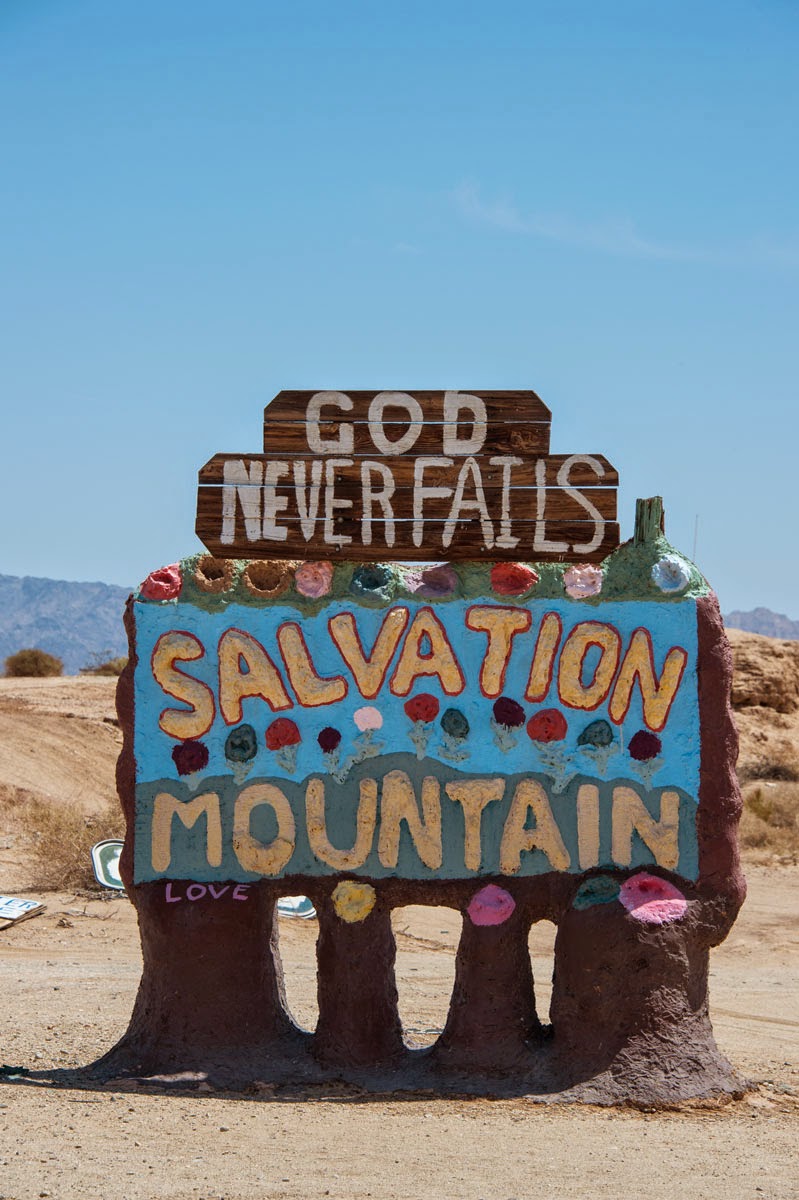 It's huge, built over and around the hill, stuffed and stacked with bales of hay and dead tree trunks. 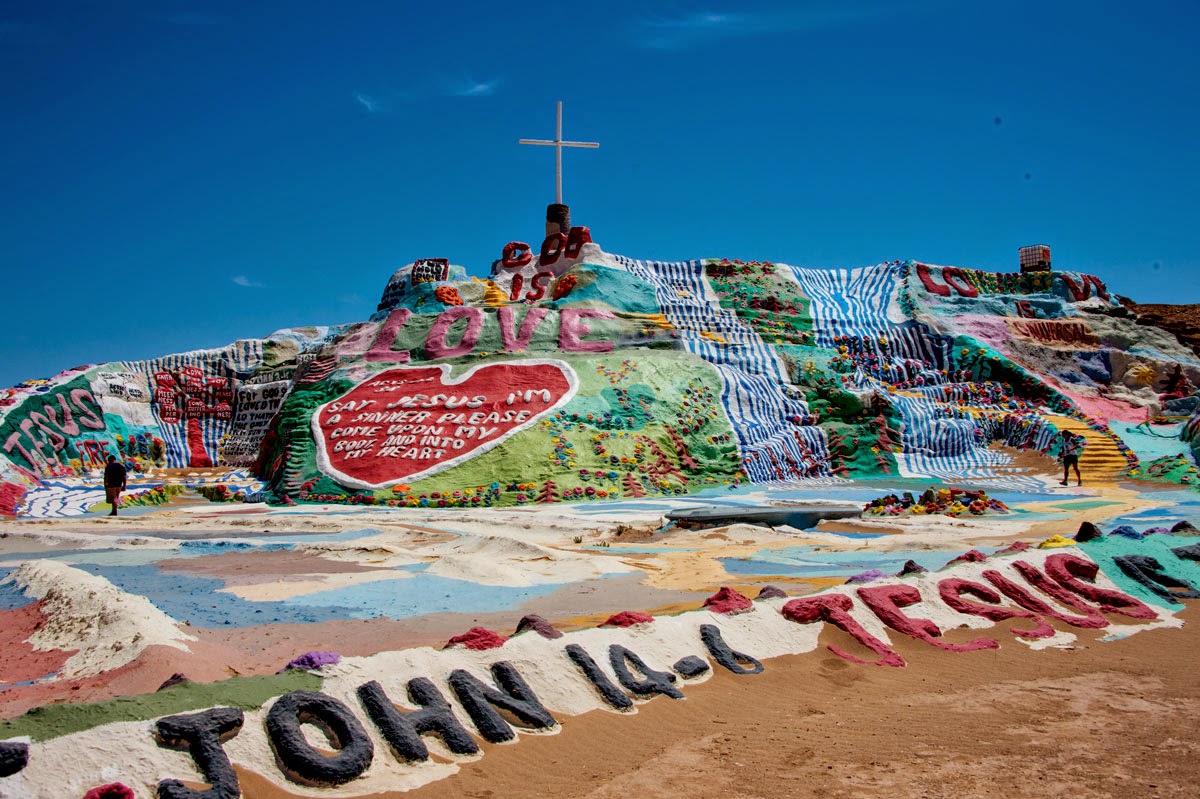 When his mountain was painted sufficiently, he started on his truck.  And the tractor.  And another truck.  And a car ... and then back to the mountain again. There are rooms in the side of the hill where it was surprisingly cool.  You are welcome to sit and enjoy, but NOT to damage or deface. 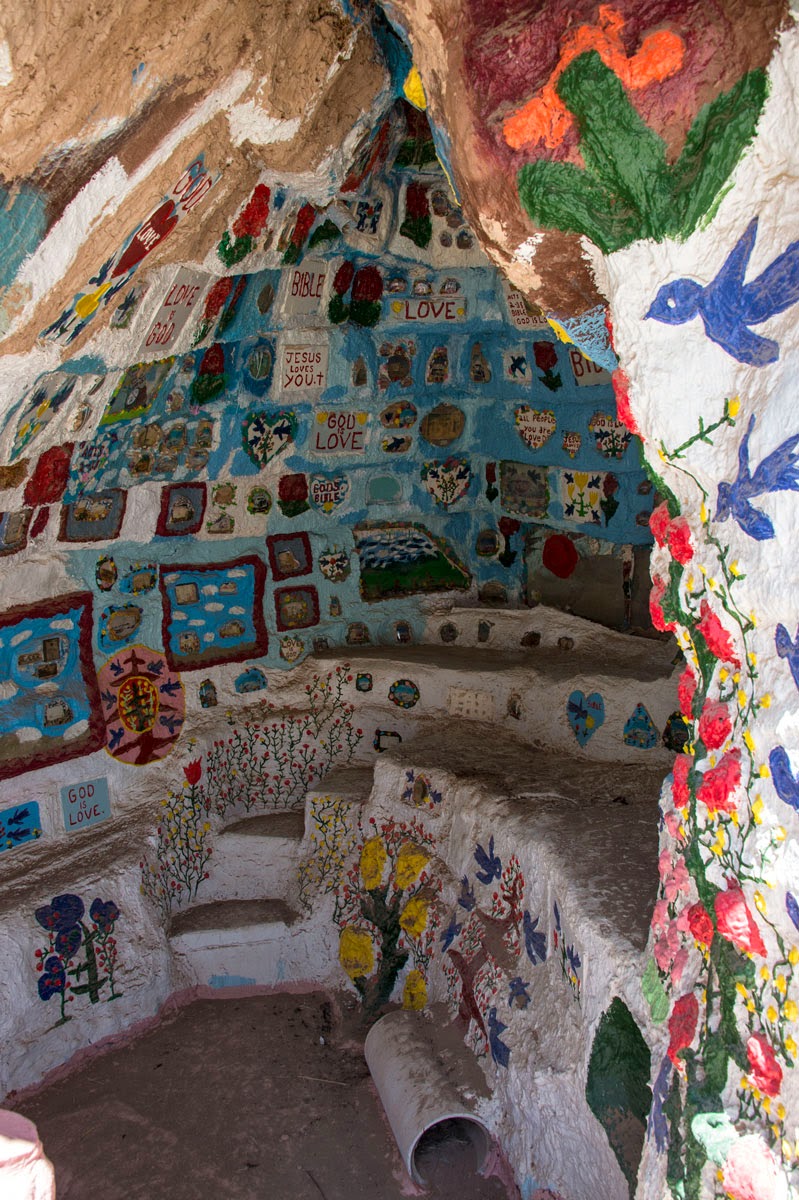 The construction is rather suspect.  There is nothing holding these old bales of hay up except a little mud.  The tree trunks seem to be bolted, chained and tied into a structure with several rooms below!!! 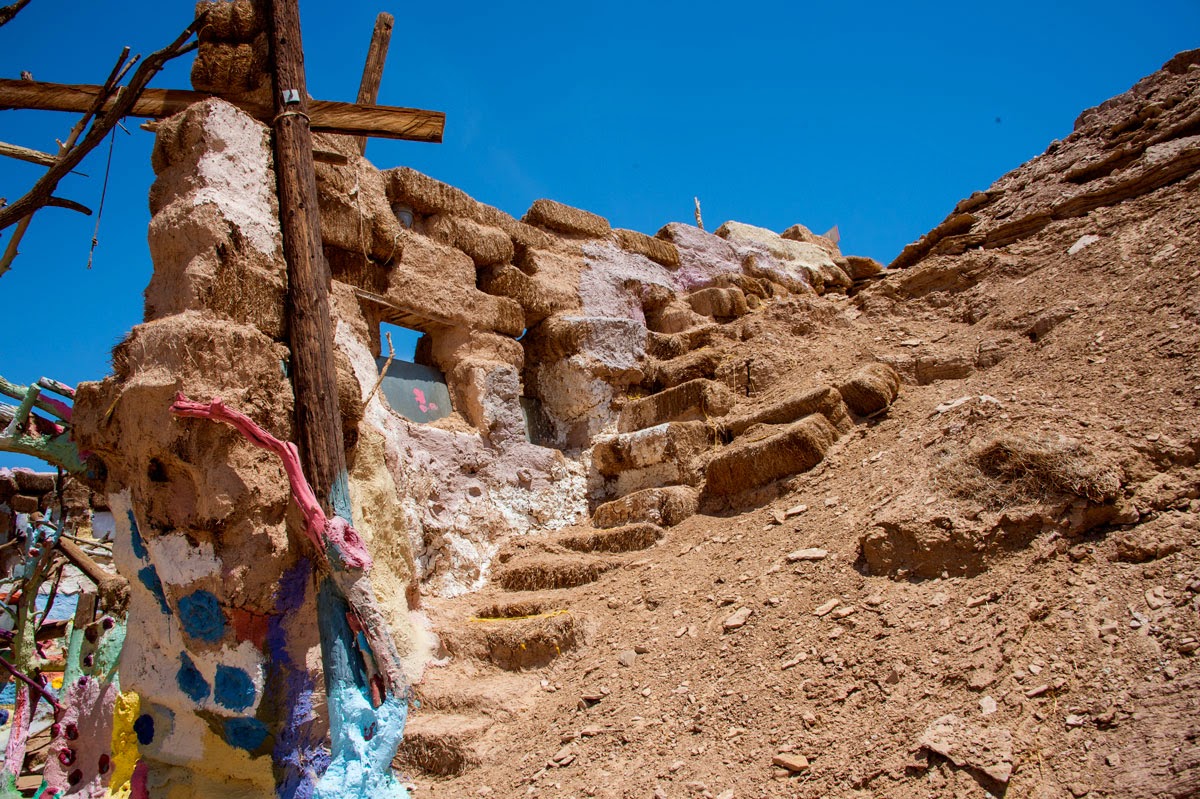 Another truck painted from top to bottom.  I asked about lead paint, but no one was there to answer.  You can definitely see this mountain was built by someone dedicated to his task to spread the word of God.  It's different, for sure ... weird maybe ... but amazing to view. 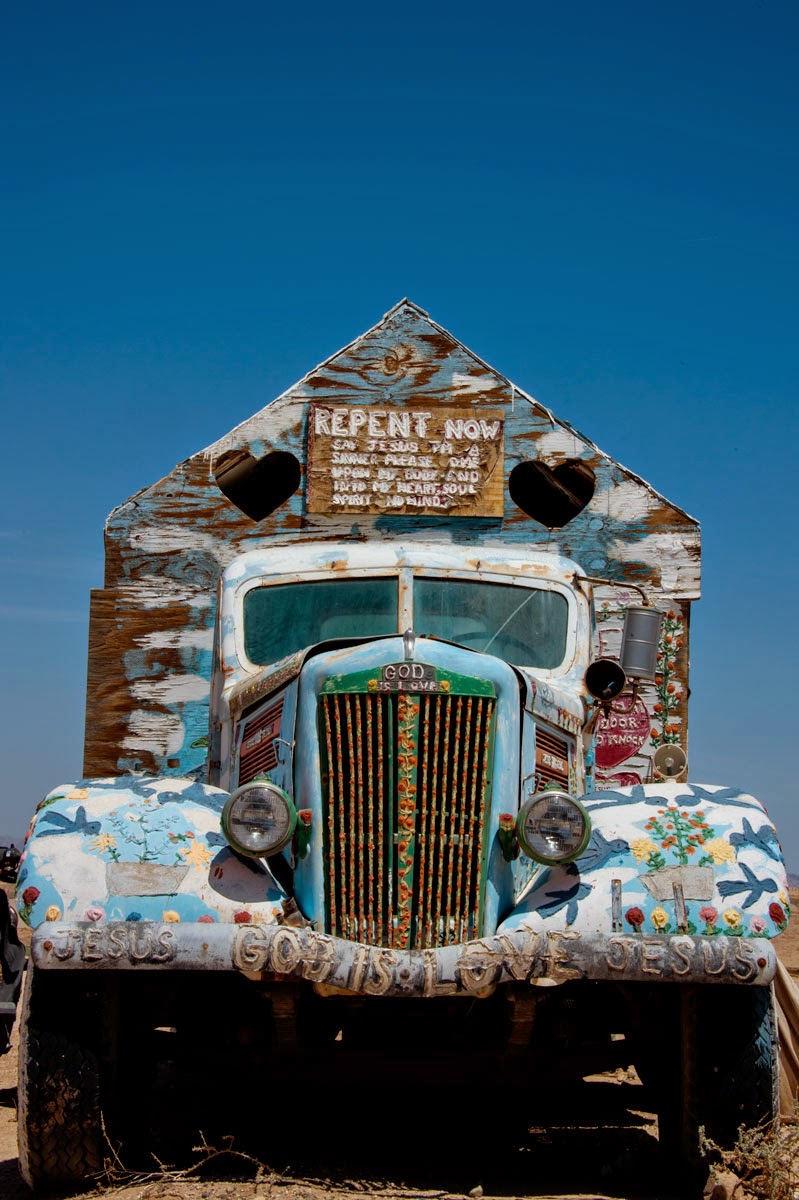 From here we went on to Slab City ... the strangest of all.  This is what's left of an old military base when the buildings were removed, thus the name. 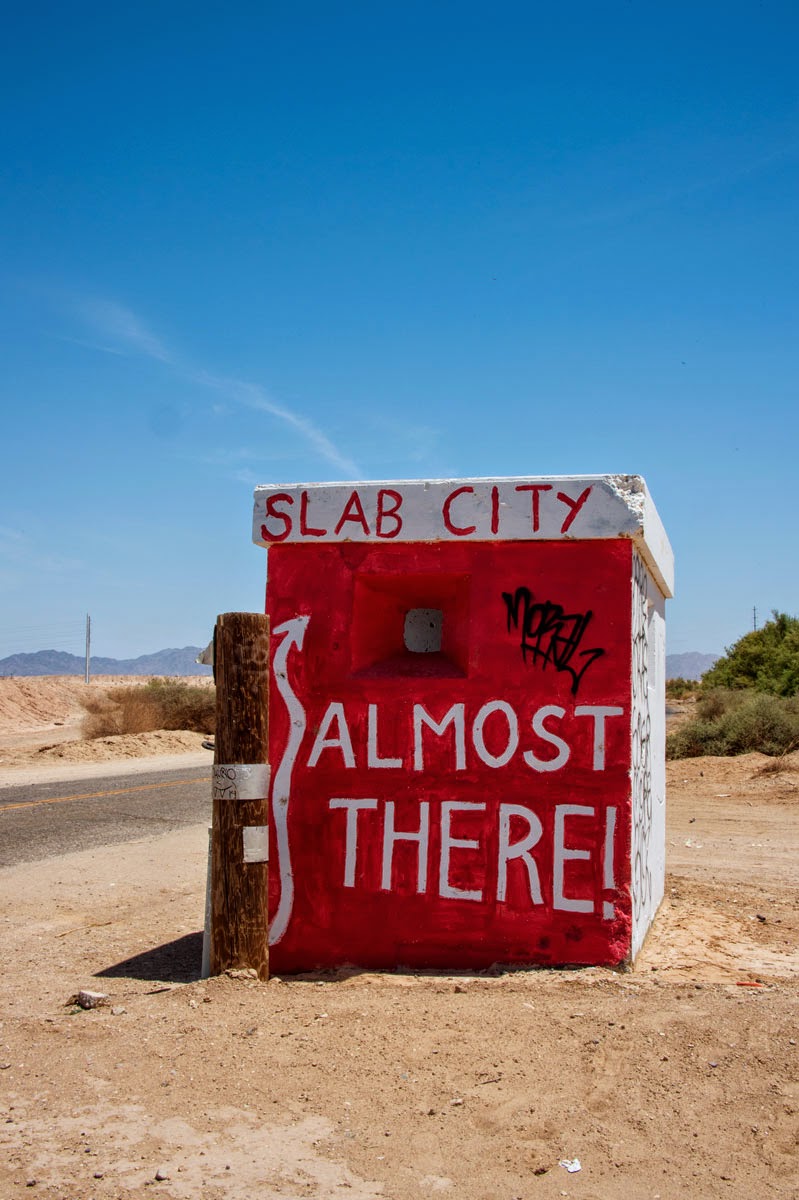 Anyone can live here ... and they do!!  With no electricity, no water and no sewer OR bathrooms.  There was one teepee, a couple tents, many old RV's with flat or no tires and many trailers.  This truck is what you do when you live here and have not one thing to do all day, but glue rocks, shells and stuff to the truck ... and whatever else you can scrounge.  Yup ... this was the weirdest.  The destination of many snowbirds, during the winter months it becomes a "hang out" for others trying to escape the world year round. Apparently there are lots of drugs, flower children, nudists and liquor flowing as well.  Maybe that's why Leonard wanted to build Salvation Mountain.  I think I prefer Quartzsite!! 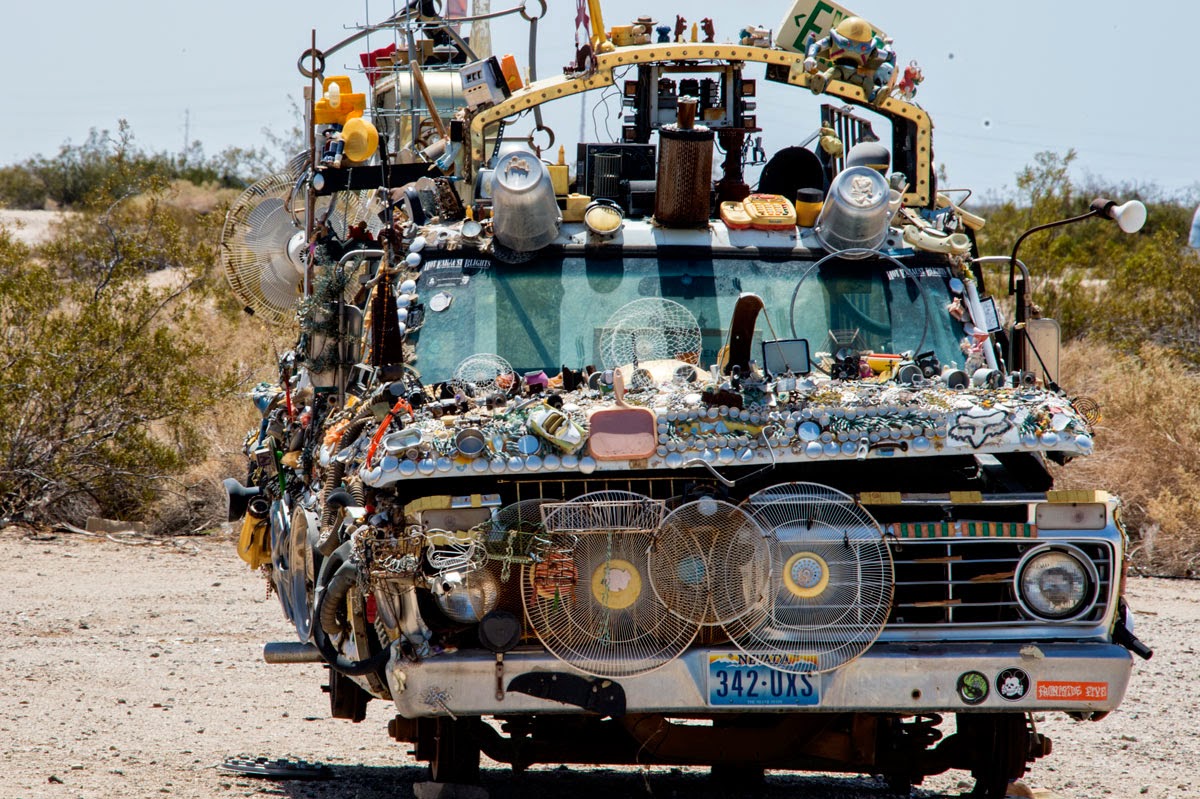 Not quite my cup of tea, the sign on the way out said "Danger ... reality ahead".  I think I'll take reality please!! 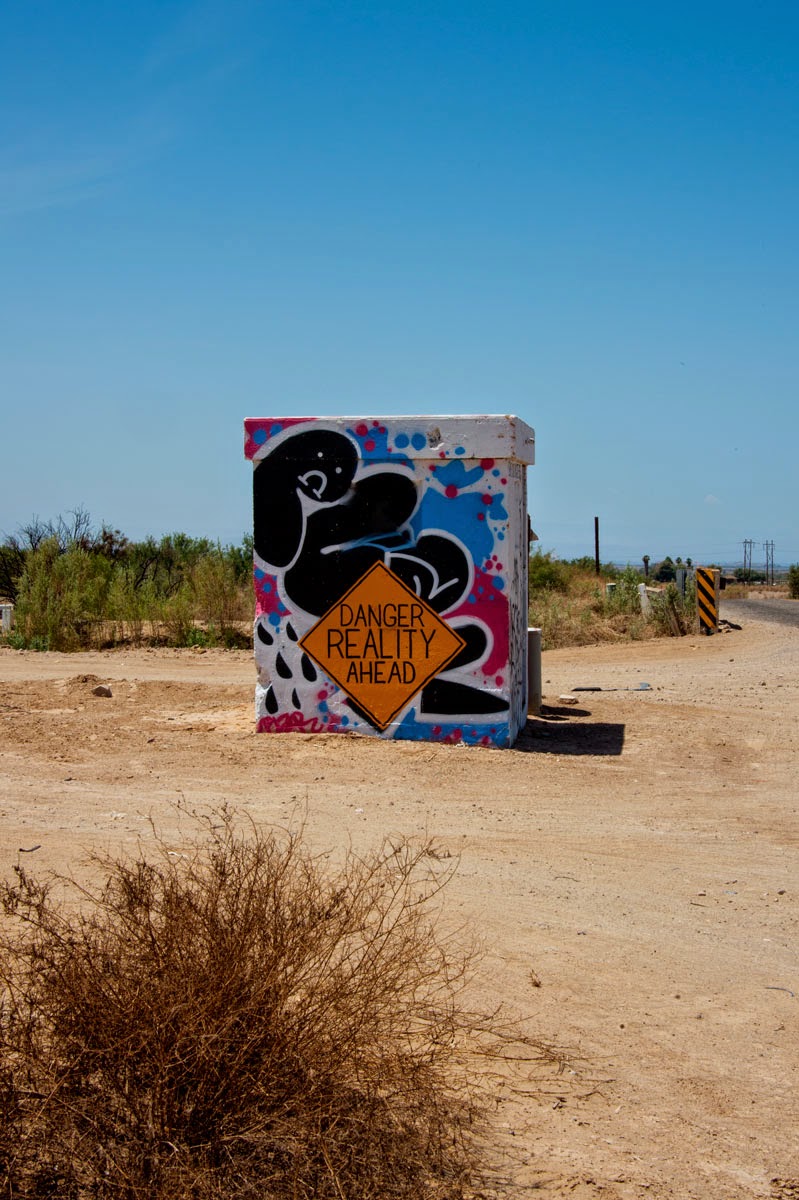 Down the long road to Borrego Springs we drove, looking for the sculptures. 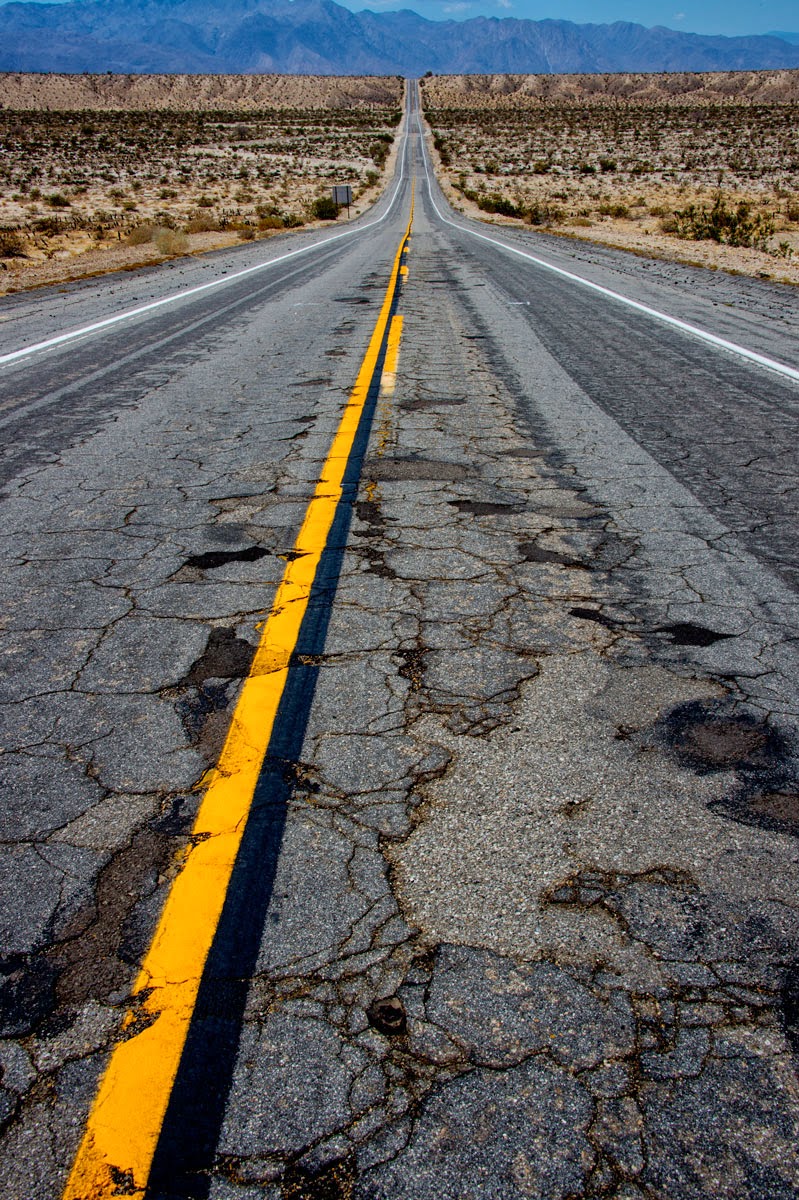 What sculptures would be out in the middle of the desert you ask??  Ricardo Breceda's 129 statues of horses, camels and dinosaurs, among other critters.  He began by making one for his daughter after Jurassic Park.  From there, he became famous as the Accidental Artist in the Anza-Borrego Desert when a developer asked him to make and display these in his new subdivision. 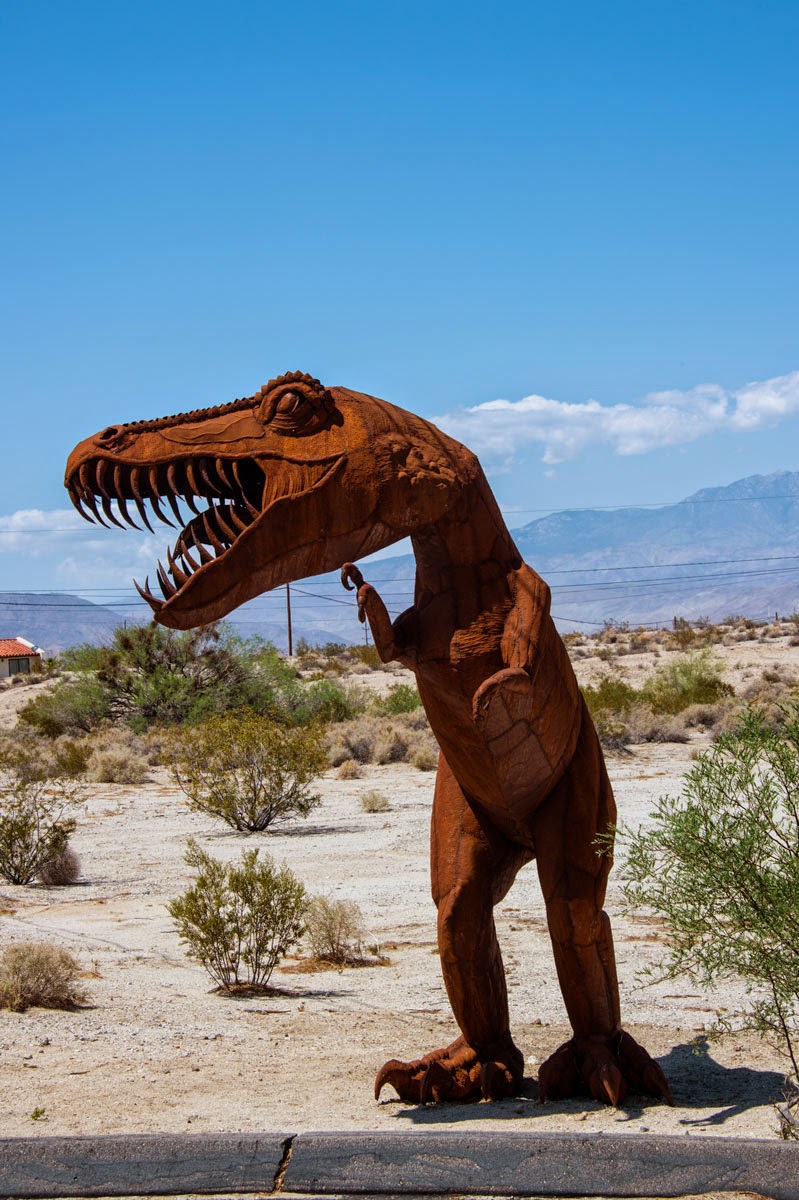 The dinosaurs are amazing. 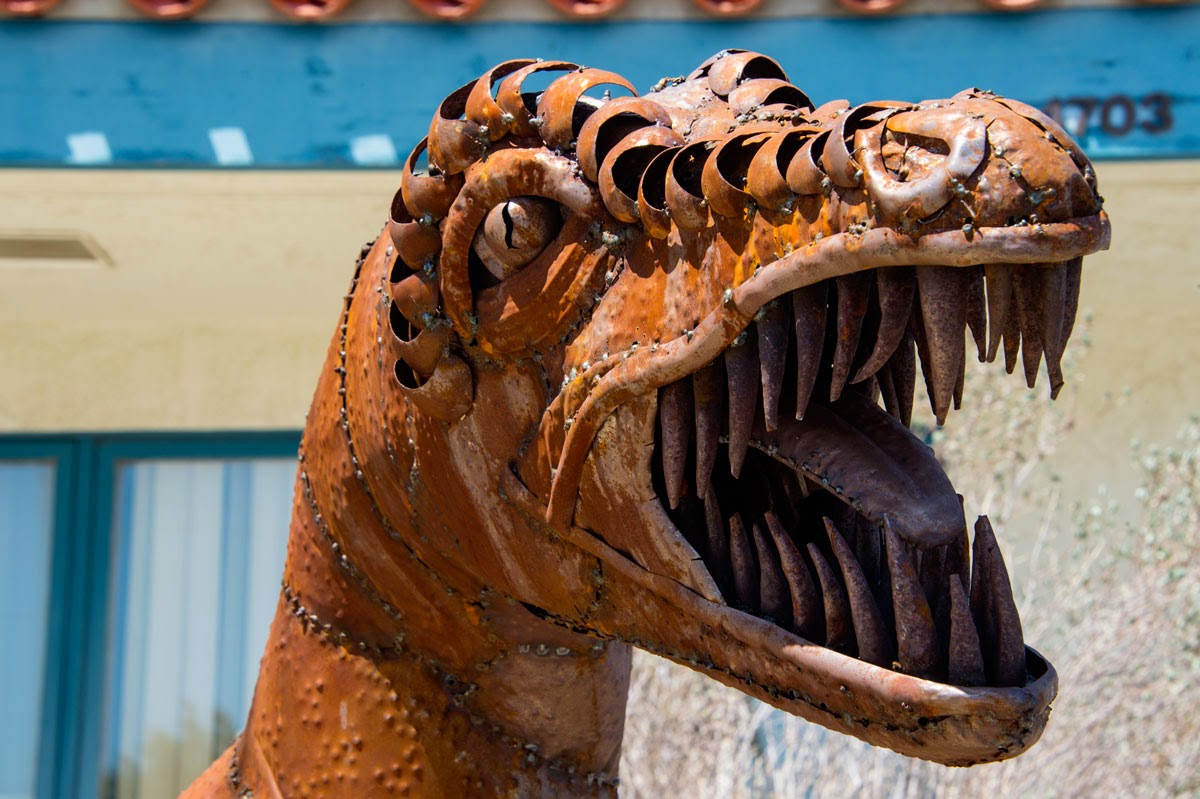 While taking pictures next to an Engineering building, a contractor opened the gate so we could see maybe 40 statues from a recent exhibit.  We sort of snuck in and got some pictures, swearing that we thought it was an exhibit.  From here we had lunch at Carmelita's Mexican Food in Borrego Springs ... the best enchilada sauce and beef taco I've ever had.  Barbara had chili verde sauce on her enchilada and said it was awesome!! 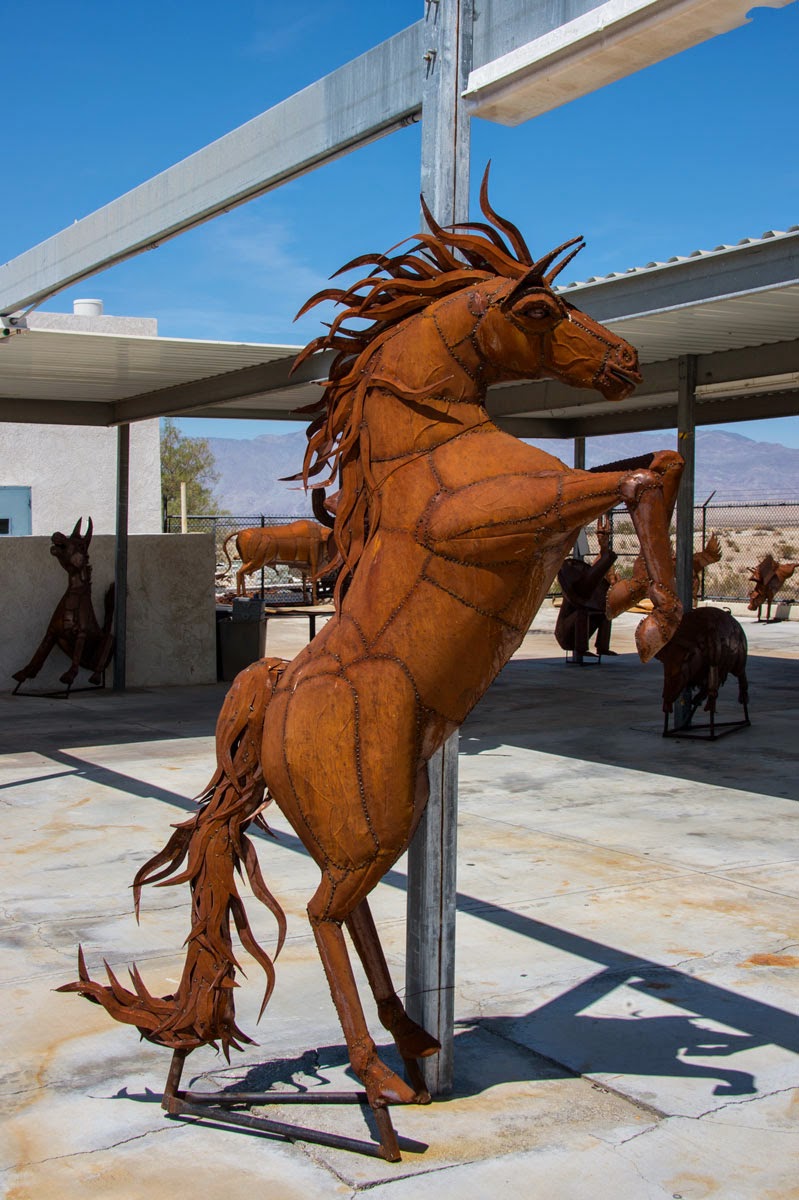 Back out on the desert was this Pack Rat ... it pretty much resembled the sloths next door, but I'm voting RAT.  Oh Oh .... maybe Godzilla!!  Tyrannosaurus Rex is probably the real name!! 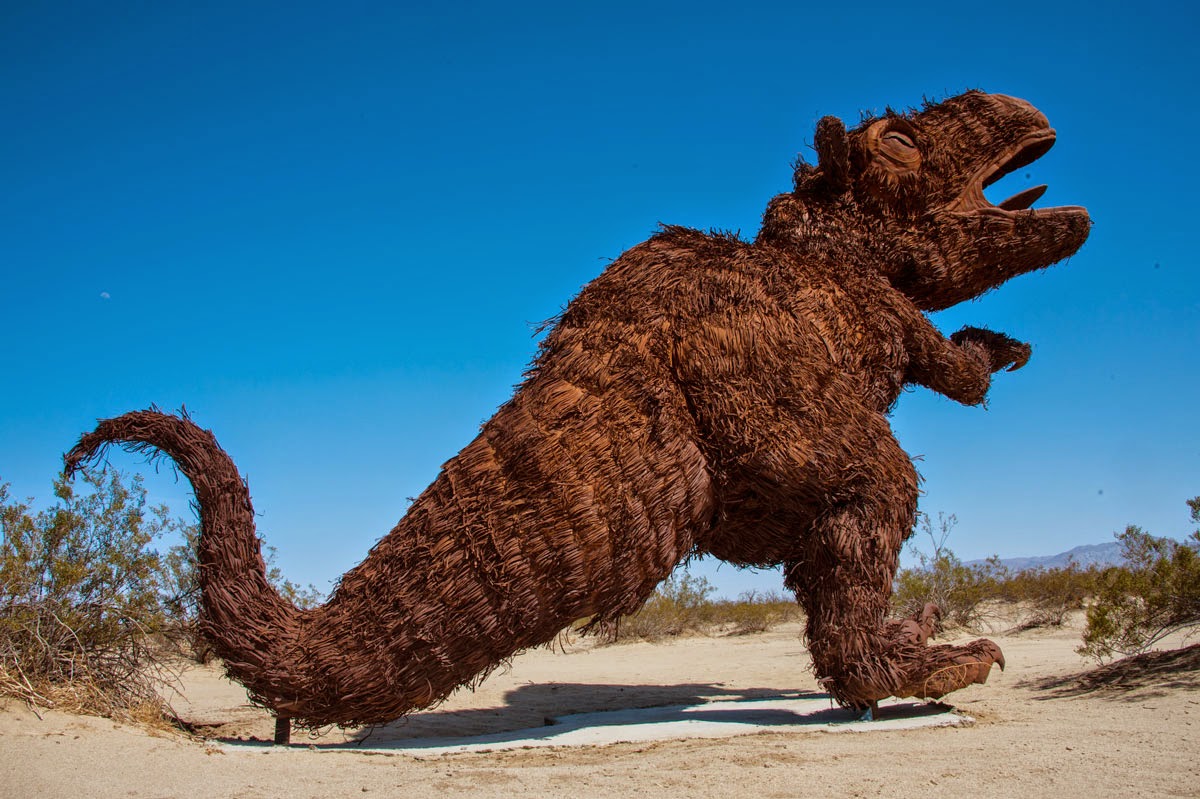 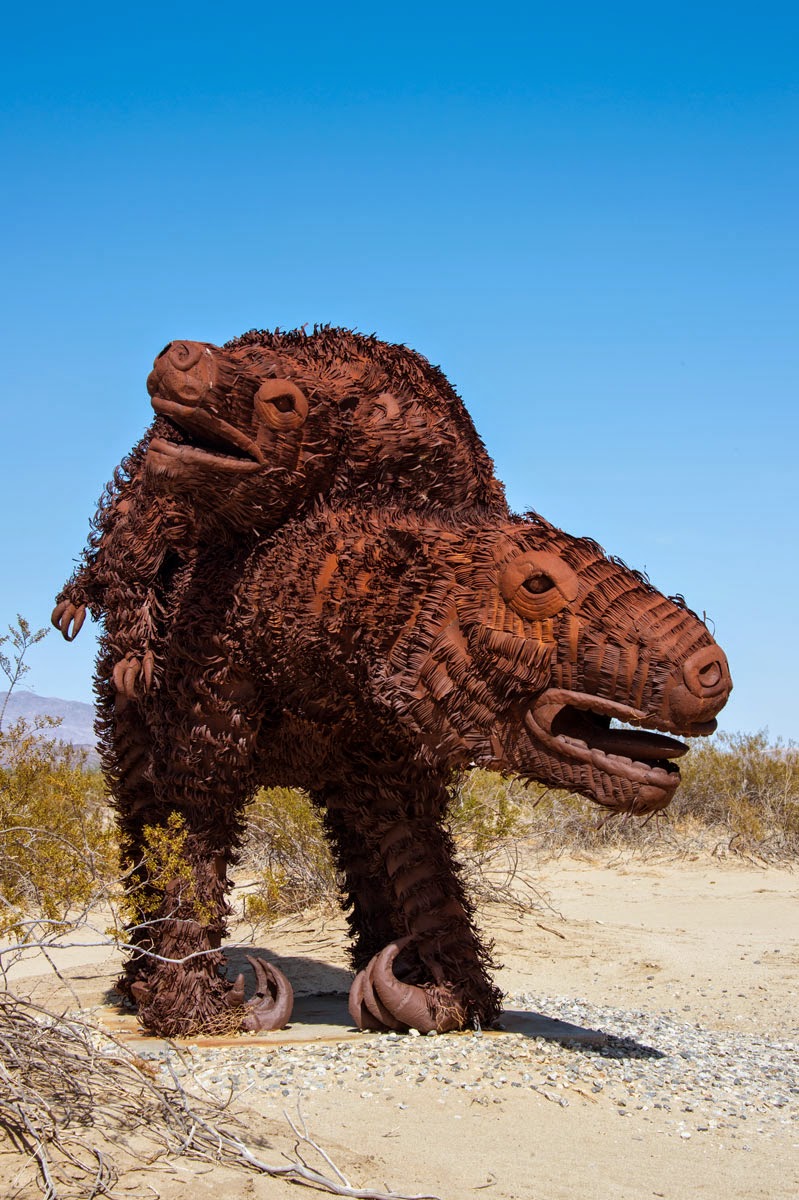 The most amazing piece was this dragon in the sand, with the tail on the other side of the road. 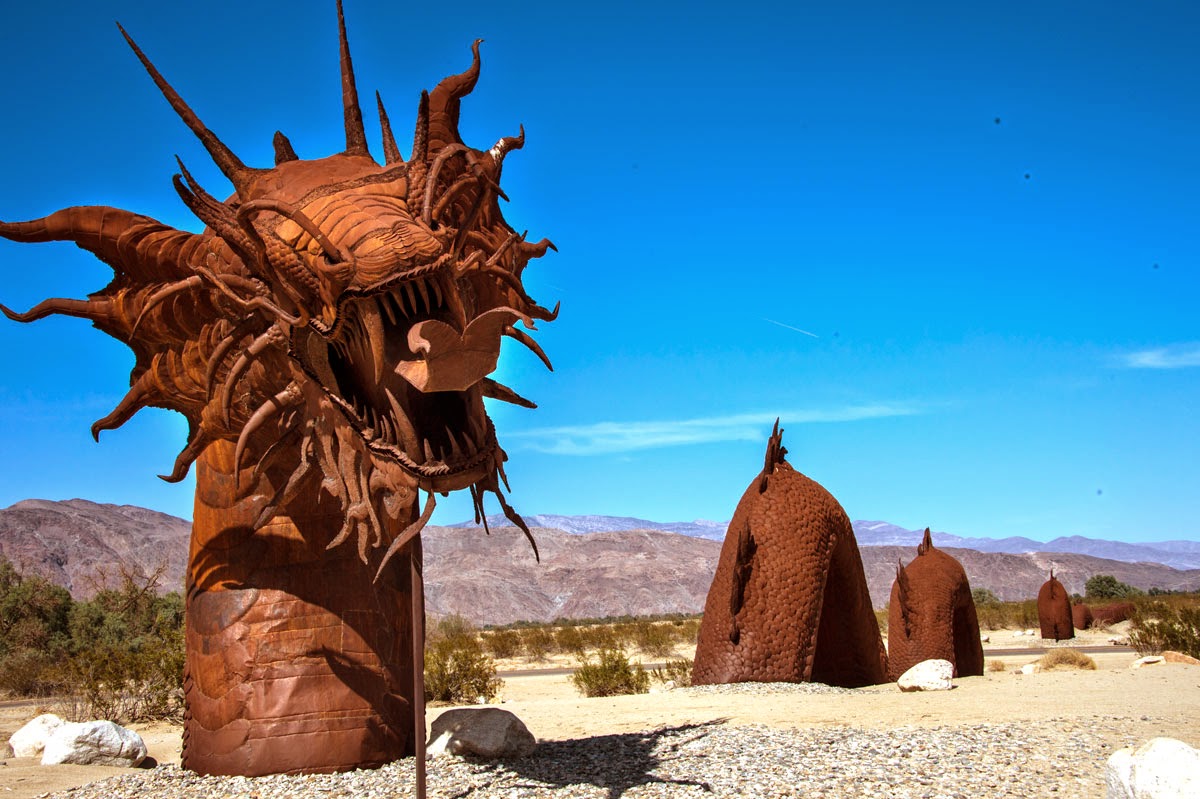 It's late now, and time to head home.  One last statue was at the entrance to Indian Head Ranch. 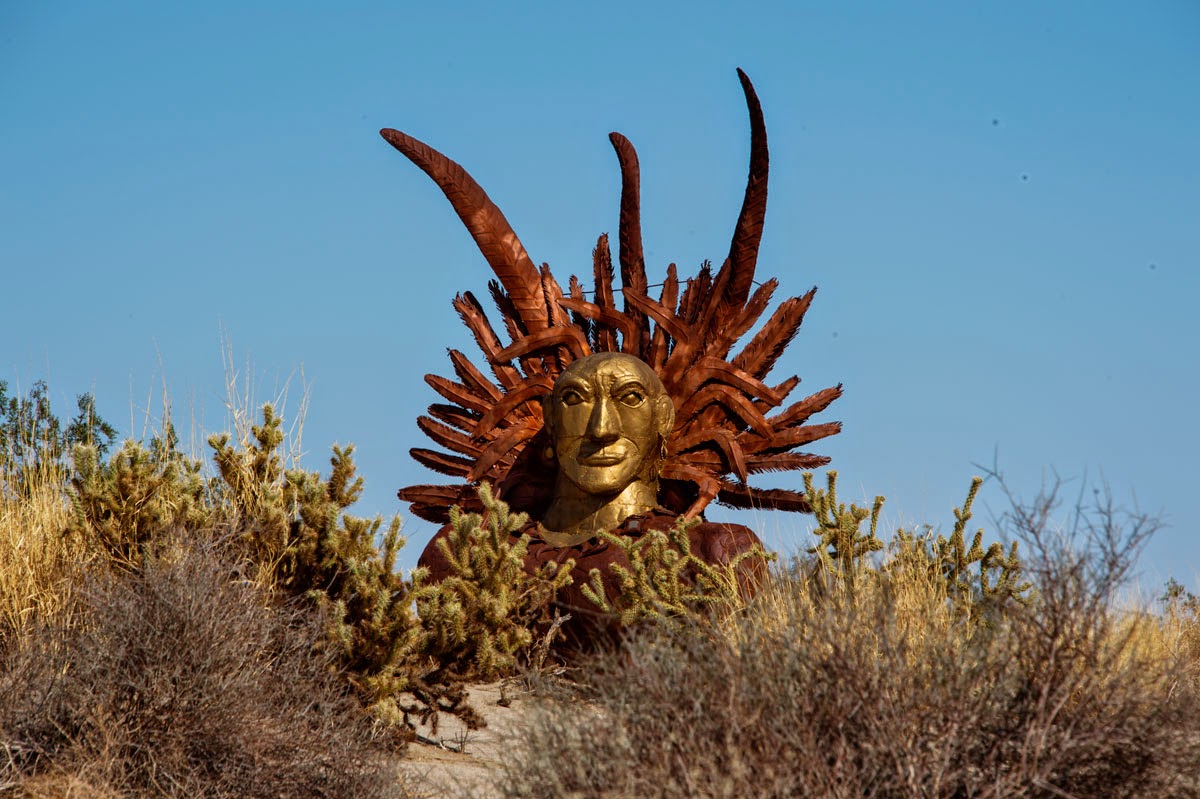 I'm exhausted!!!  All that camera carrying and jumping in and out of the car beat me up.  Just to end the day on a perfect note however, a small roadrunner just crossed the parking lot by my rig.  I love the desert!!

Posted by Nancy Kissack at 6:42 AM