On the road again ..... but instead of taking Hwy 40 through Albuquerque, we took Old Route 66.  Down the back side of Nine Mile Hill, we passed by motel after motel, mostly closed and in various stages of decomposition.  The only problem was, the further we went, the narrower the streets got. 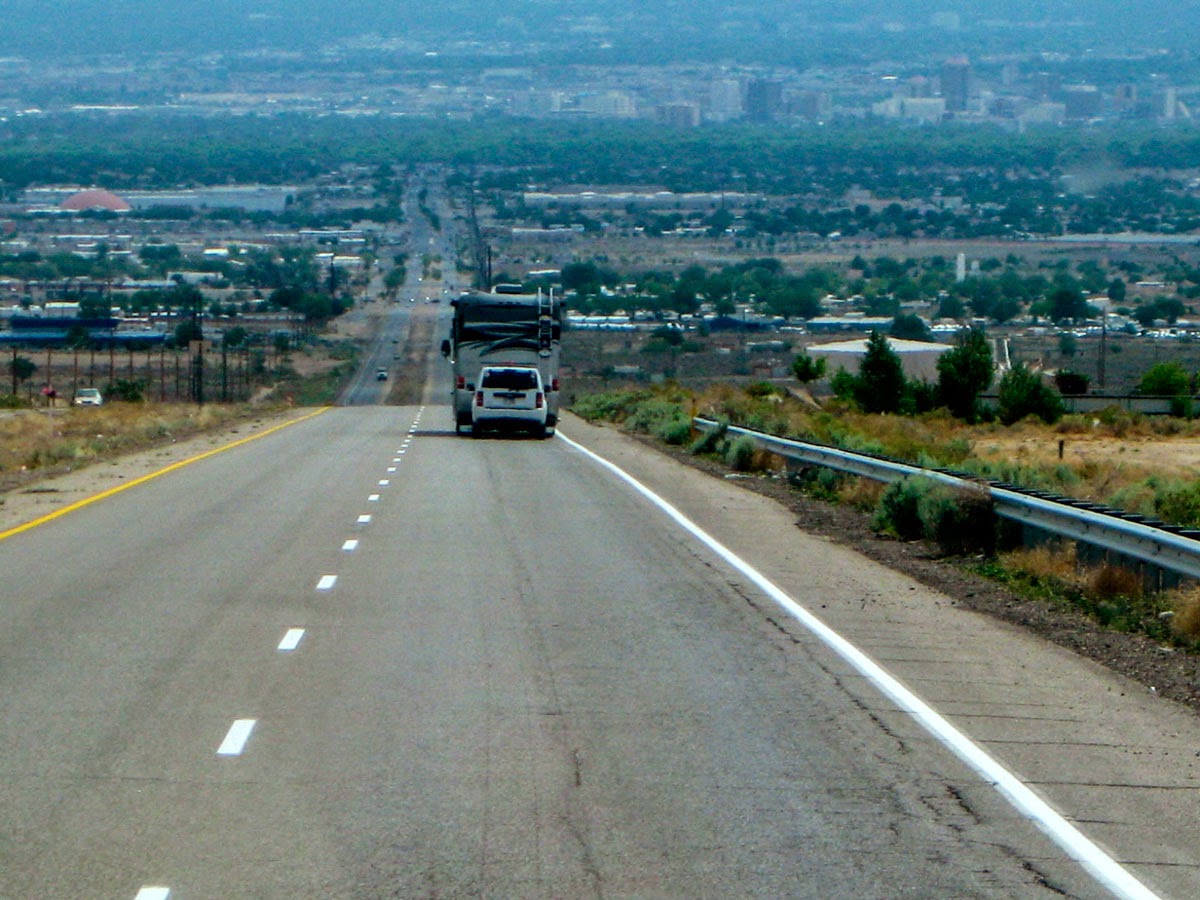 I don't remember signing up for any RV driving school today, but I got a good lesson on Route 66.  If you have a big rig, or even a small rig, I suggest you forego the "old drag".  I barely skirted between trucks parked in the middle of the road and large dually pickups parked on the right, not to mention the overhanging trees and 13 foot overpass we went under.  Actually it was 13'11", but it felt like 12!!!  Flashbacks of following Dan Chance under the railroad trestle flooded my brain!! 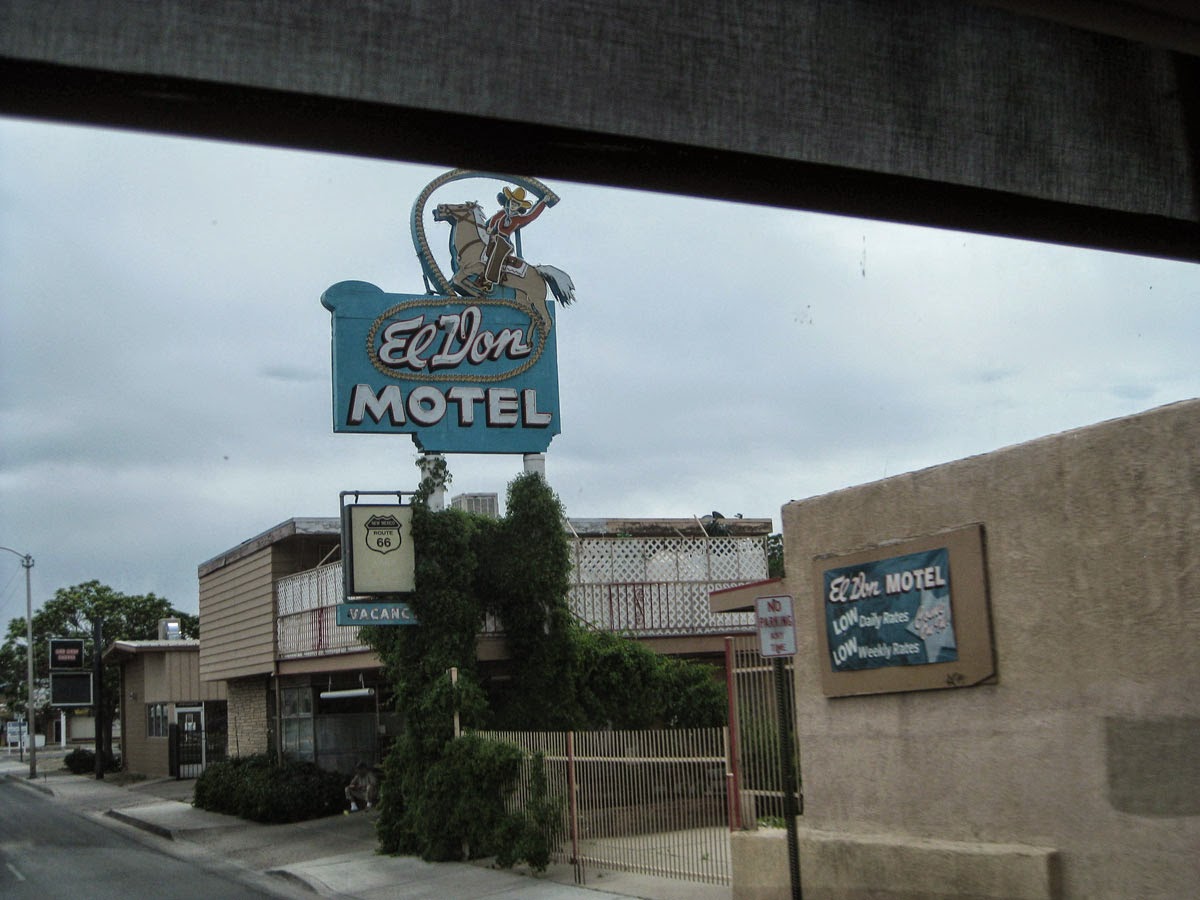 The El Don Motel, the Westward Ho Motel and many others were either made into dorm rooms for the college or barely surviving.  It was sad to see so many business OUT of business!!  Crazy people on every corner waving us over, smoke shops, it's different to be sure!!  When Tom said he'd had enough, we made a left hand turn on to an even narrower street ... the left lane and half the right was blocked with large cones ... the right lane taken up with garbage cans ... it's pickup day.  Holy cow!!!  This was a driving lesson I wasn't prepared for!!  ADVANCED RV ... don't you DARE hit anything ... TEST!!  Thank goodness I passed, barely squeaking by the obstacles, including on-coming traffic ... as we finally pulled onto Hwy 40 East.  Whew!!!! 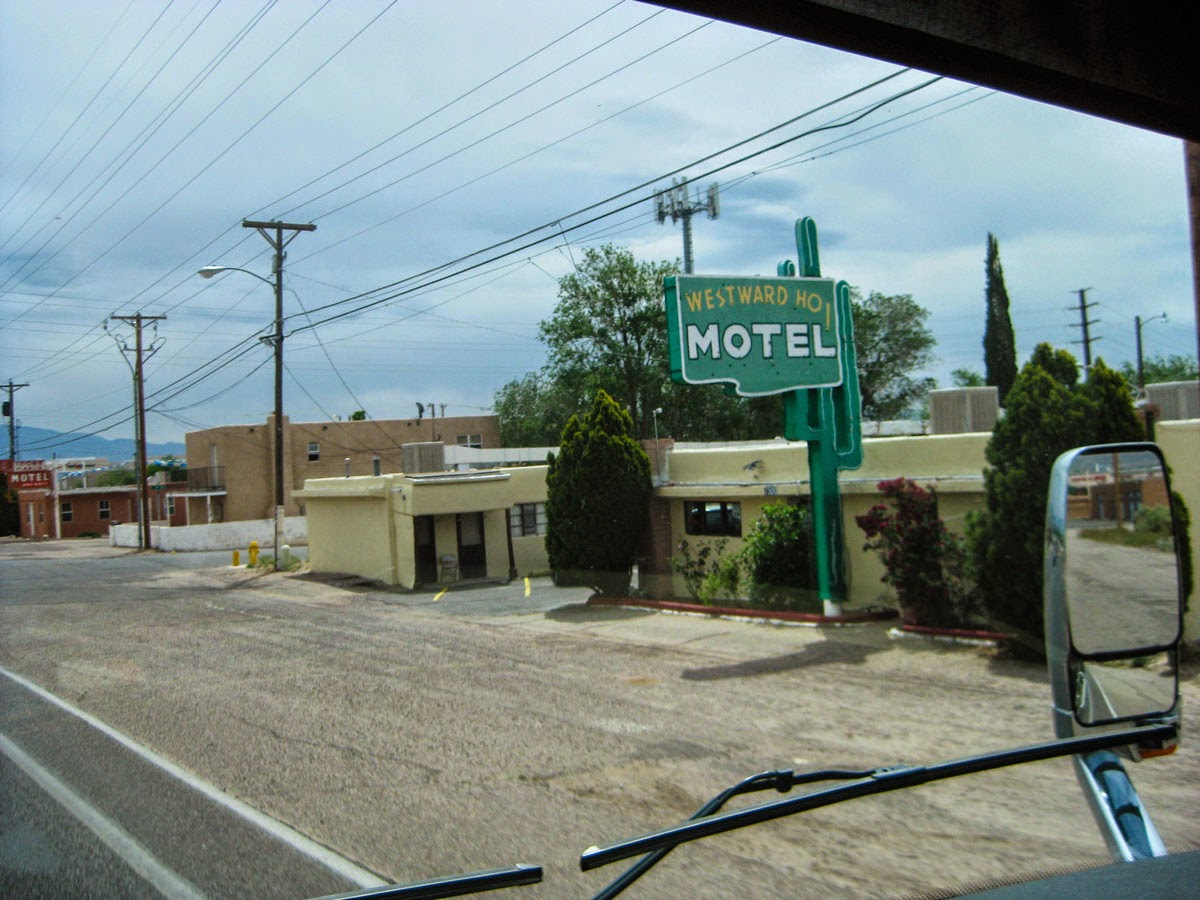 People say there's not much out here but jackrabbits and cactus.  Guess what ... they're RIGHT!!  Except I never did see any jackrabbits!!  There was more driving-practice road construction.  Thanks to the truck driver, whose quick reflexes averted a bad accident when an RV and a pickup/horse trailer combo didn't quite pull off the roadway ... on that hill ... on that curve!!! 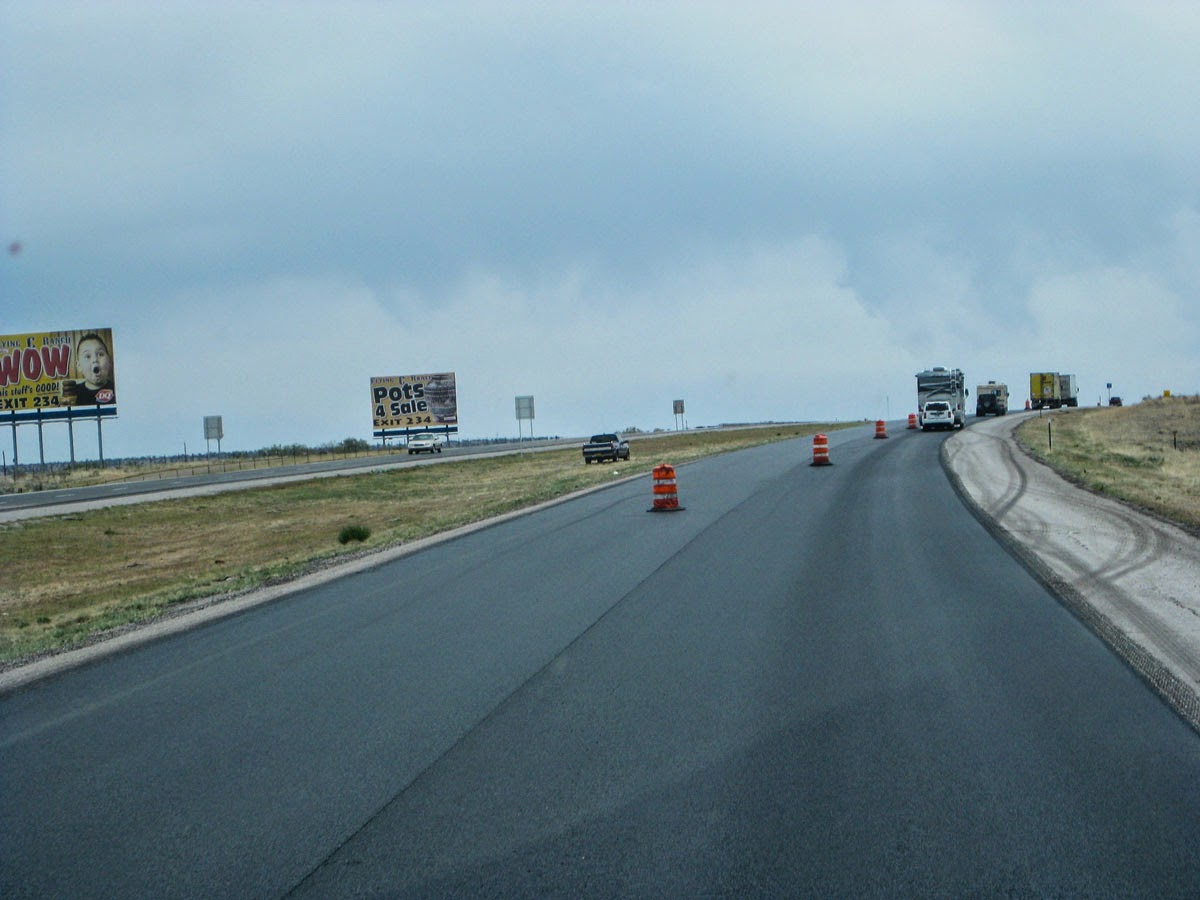 Yup ... lots of land and lots of scrub brush.  Route 66 paralleled us from time to time ... and that was about it, except for the thunder clouds gathering in the distance. 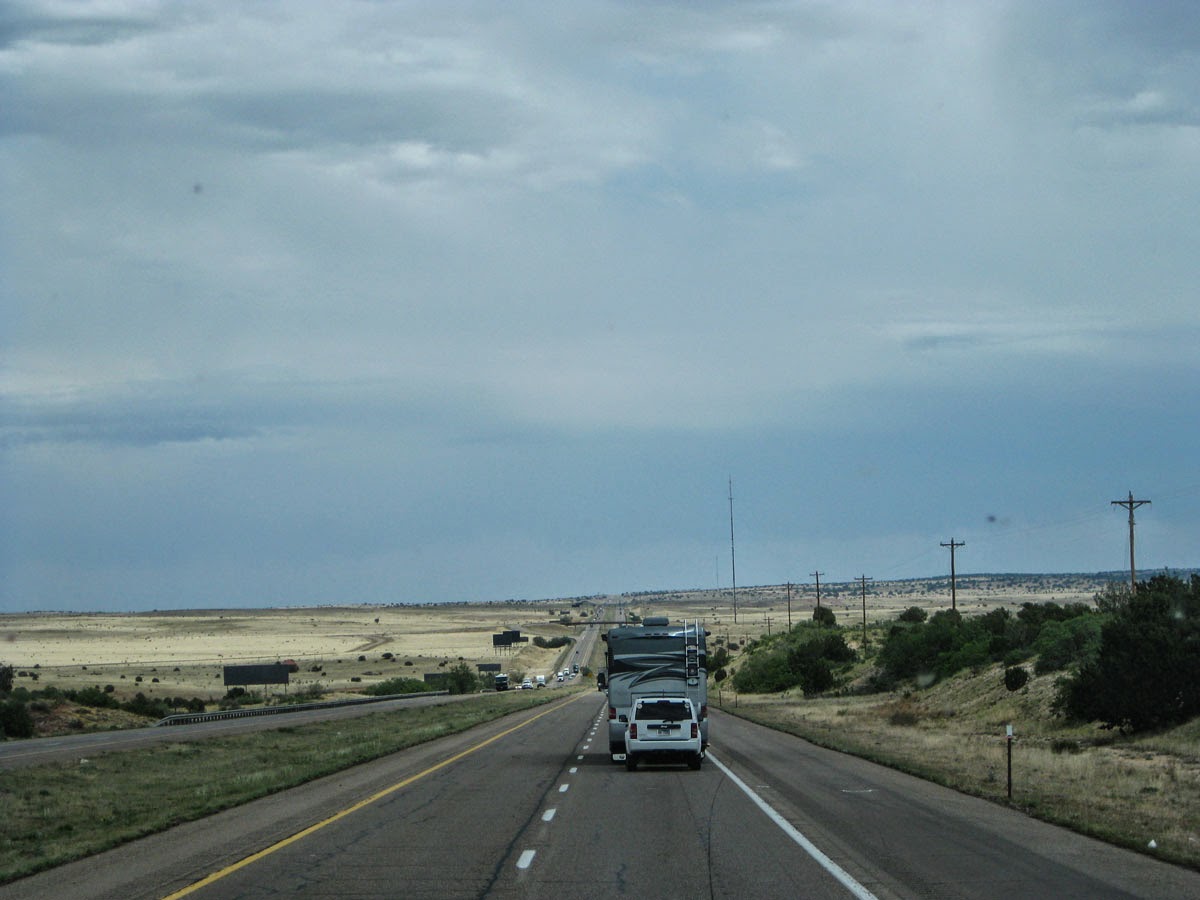 Every so often there was an old abandoned service station turned house turned dump. 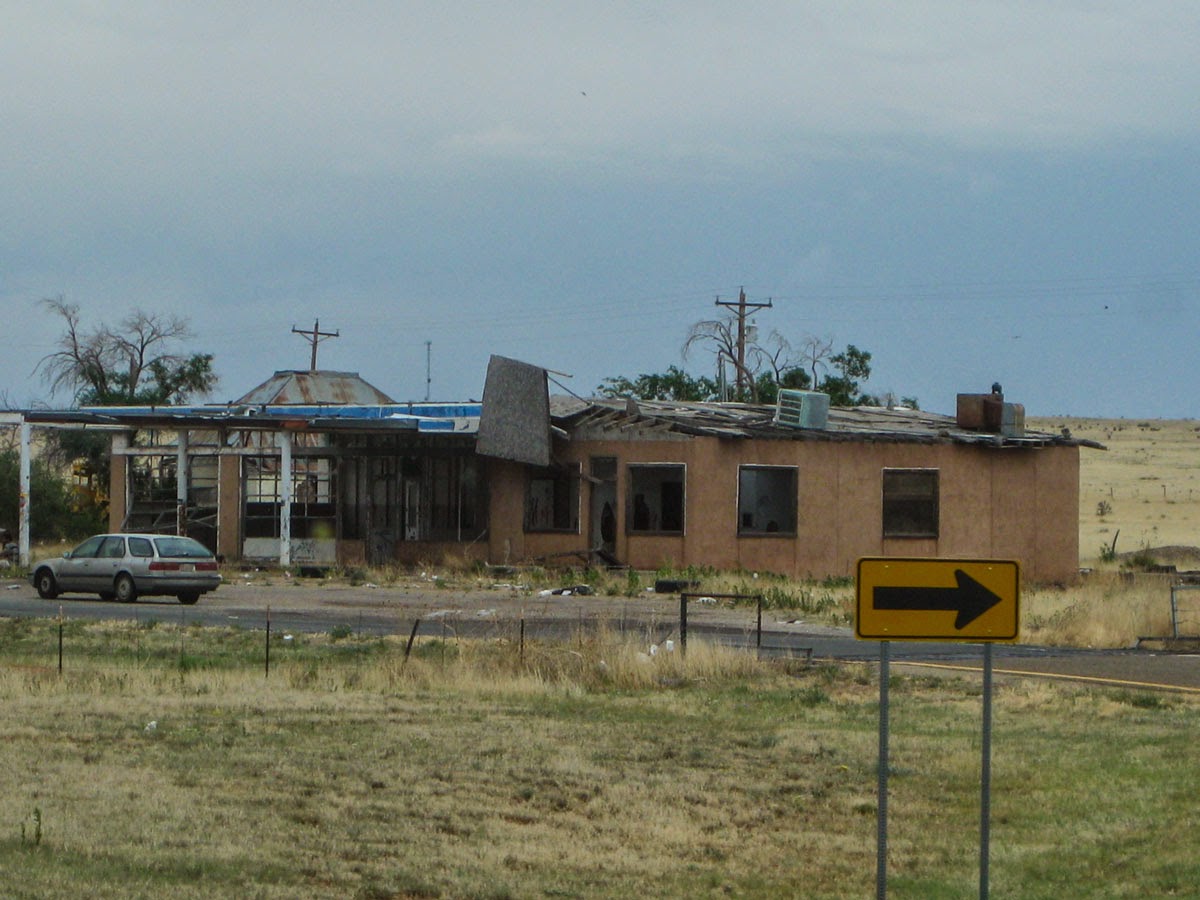 This is Cuerco, an old ghost town.  I requested we stop on our return trip, but Barbara said they gave you the stink eye big time here, and even when Nick Russell stopped for a Gypsy Journal story, they told him to move on.  Too bad ... I'd love to spend a couple hours here with my camera!! 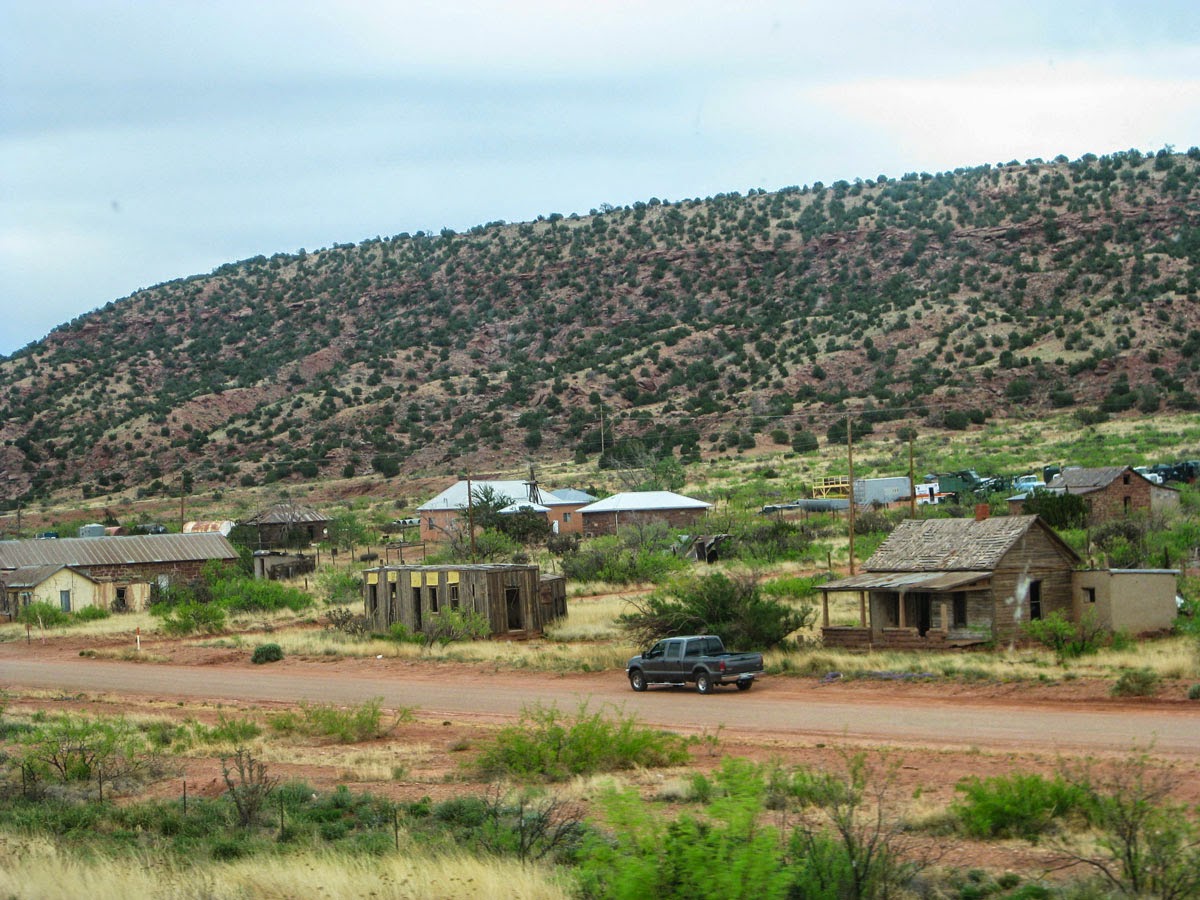 At long last we arrived in Tucumcari to see another ghost town.  This used to be a huge Travel Center with service station and restaurant ... out of business since Hwy 40 bypassed the town. 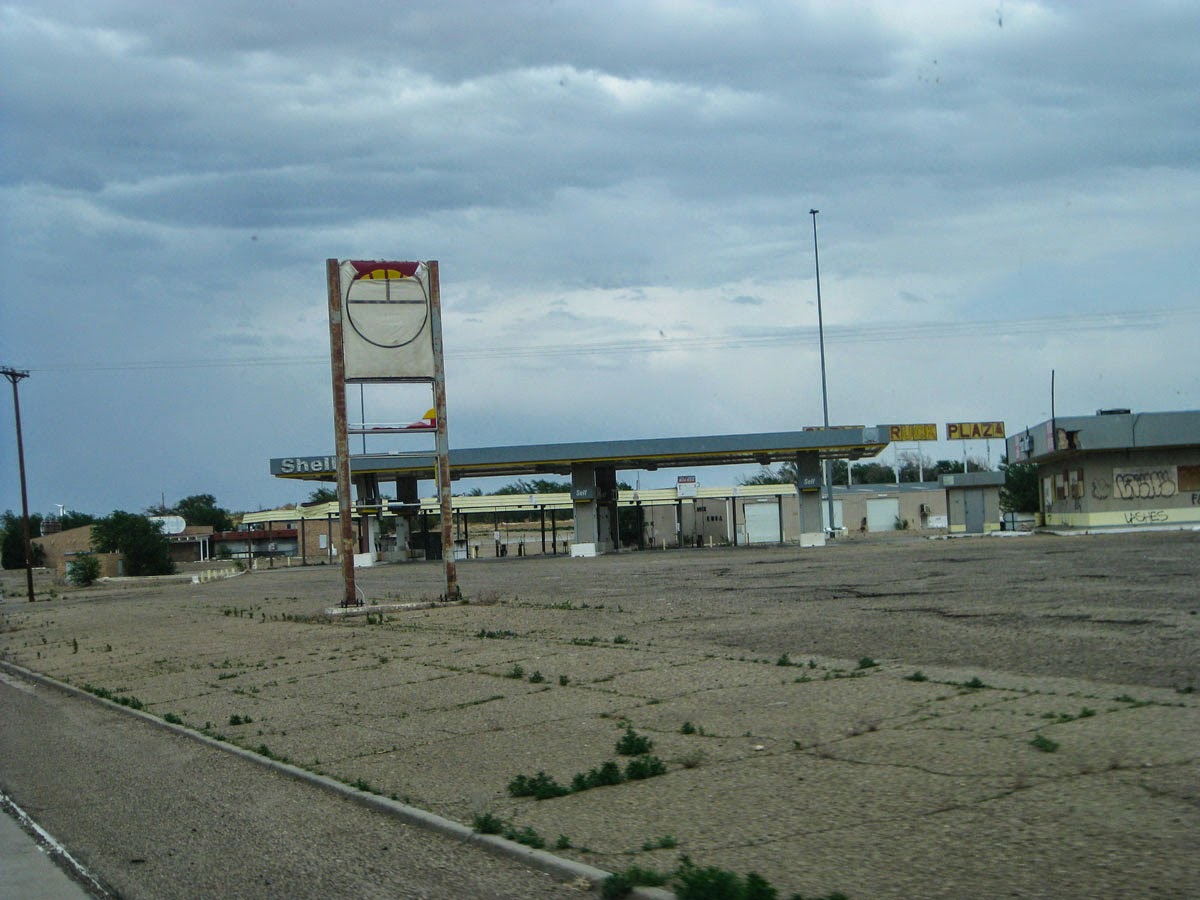 There are lots of unique buildings here on Route 66 as it winds through town.  Very few were still open, like this curio shop.  Can't wait to stop in here!! 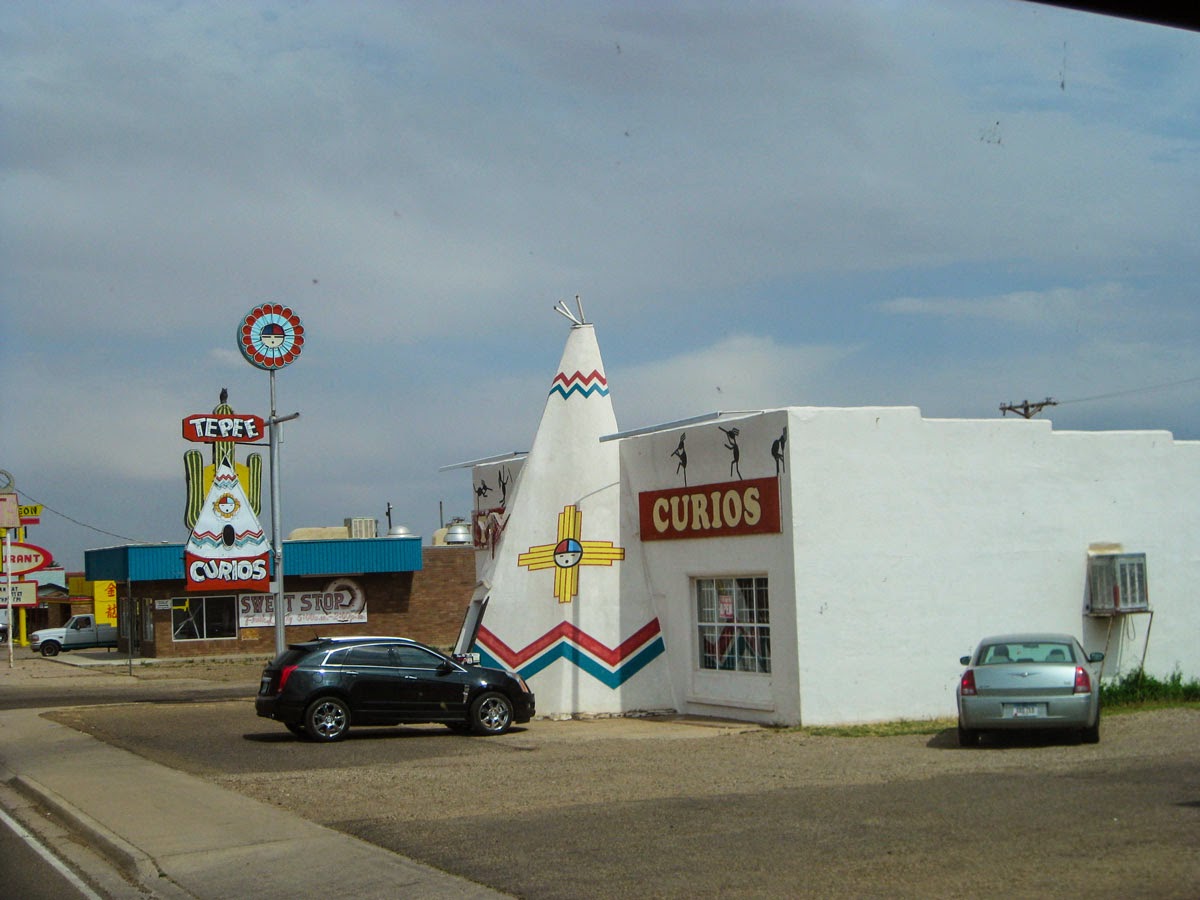 This was a Mobile Oil service station ... not sure WHAT it is now!! 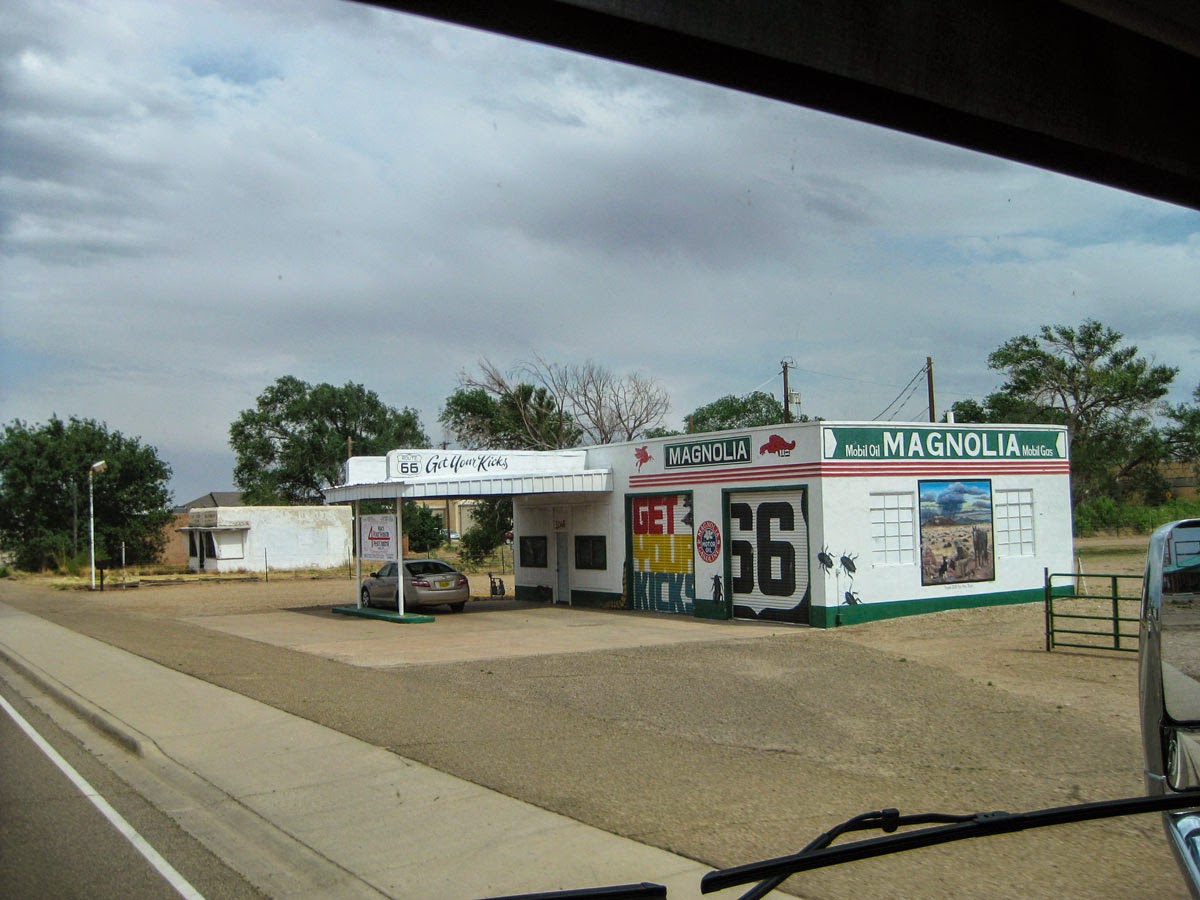 We are spending the next week at Cactus RV Park in downtown Tucumcari in order to miss all the holiday traffic and crazy new RV drivers!! 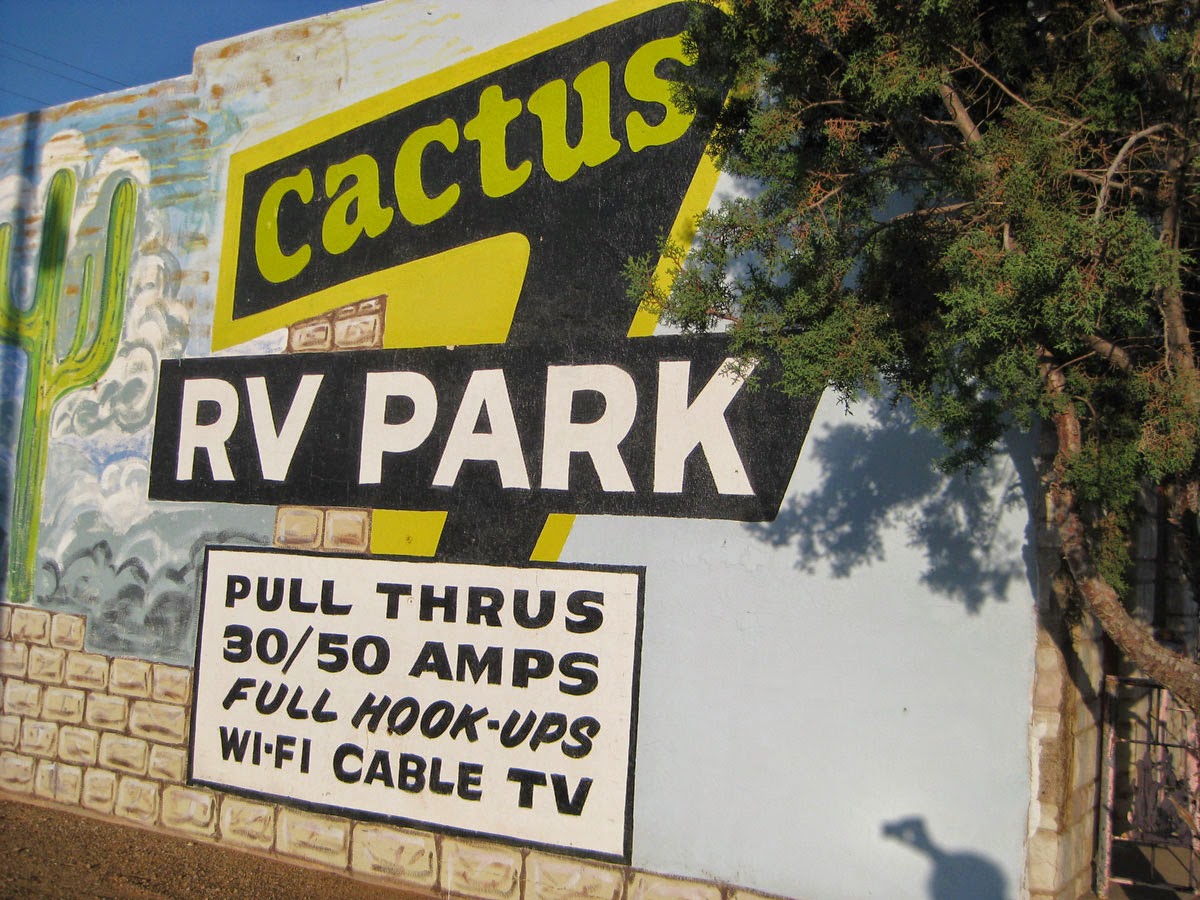 Now when you first pull in here, you might think you made a big mistake!!  Remember however, looks aren't everything!! 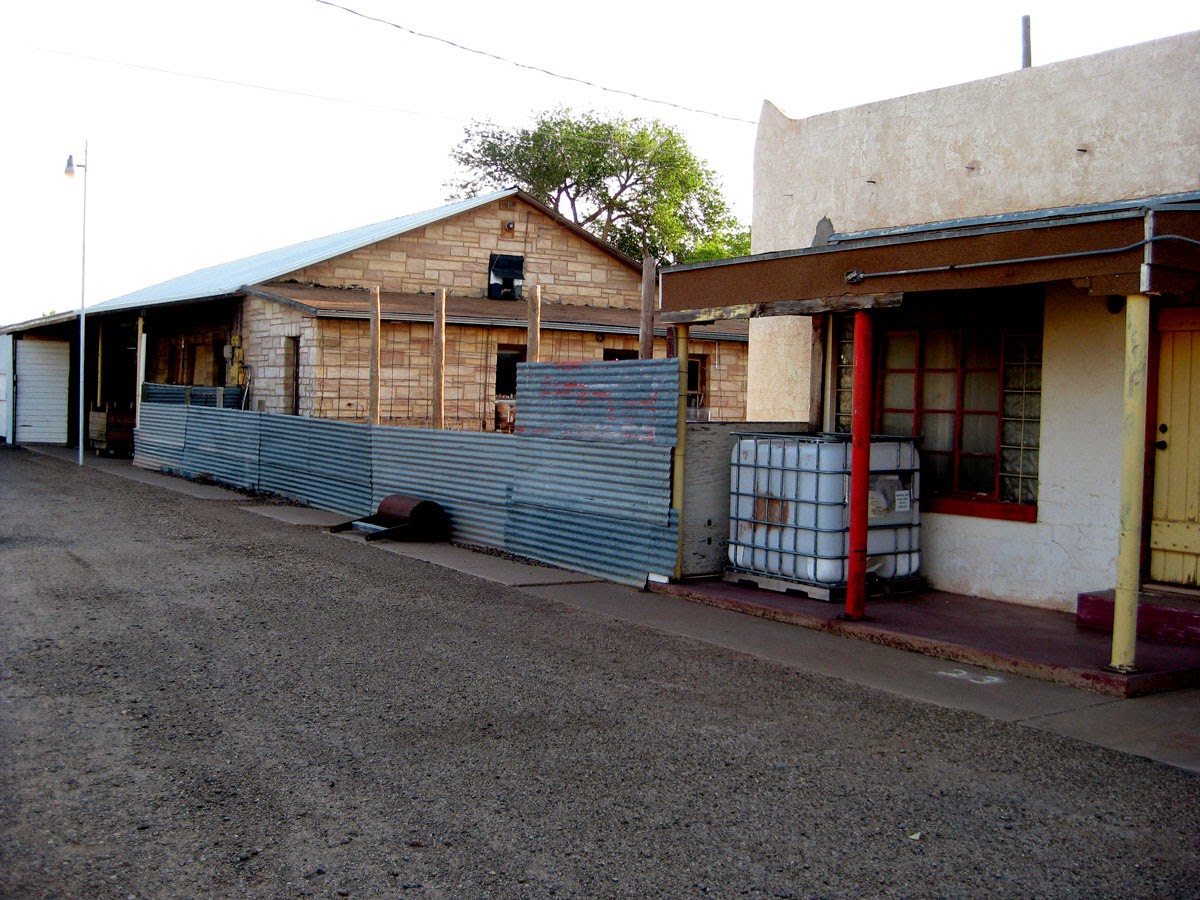 This is a great place with 30 AND 50 amp hookups, good city water and sewer for $136 a week.   Easy to pull through LONG sites on level ground.  It's VERY quiet ... I only heard two trains so far and extremely nice people run the place.  The REAL reason I love it here however, is that it's smack dab in the middle of the courtyard of an old motel!!!  I can't wait to get my camera out for some shots of THIS!!! 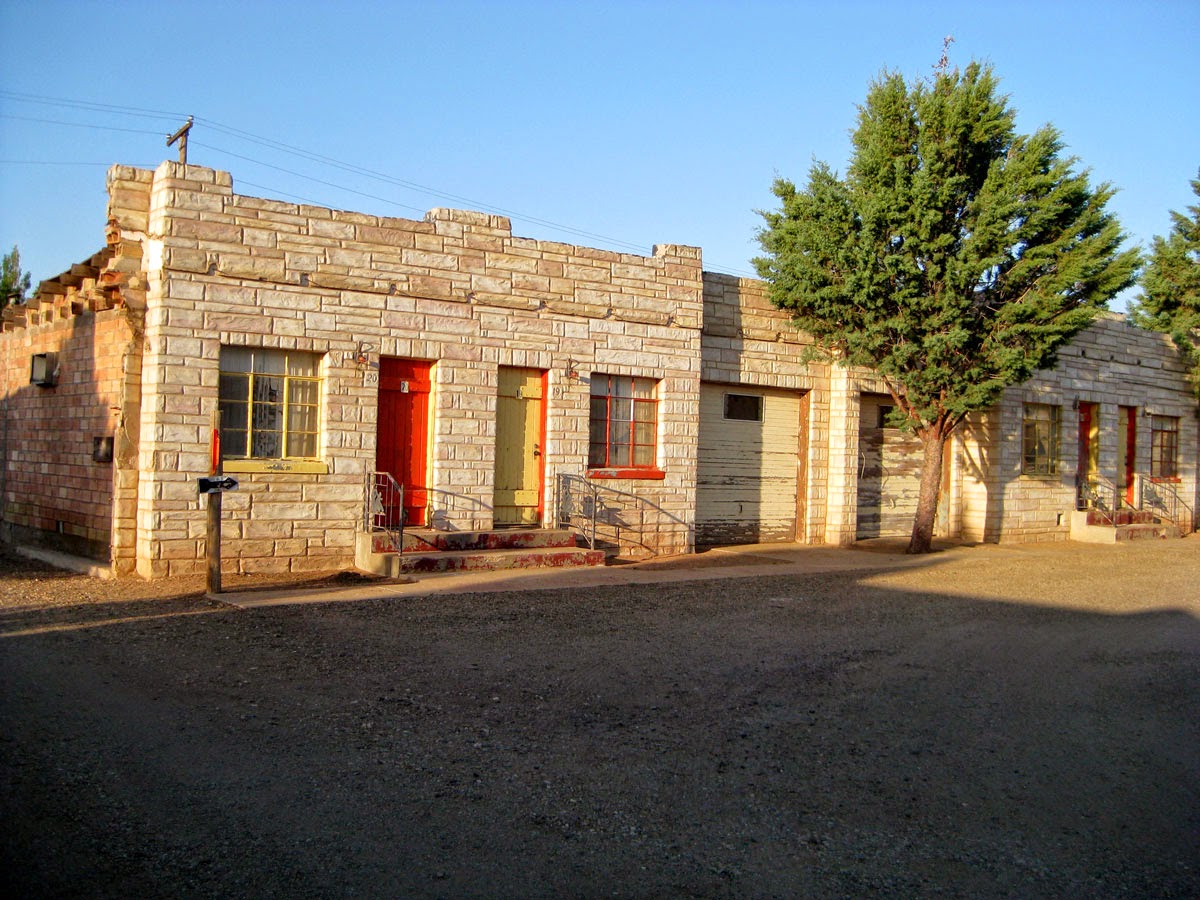 Barbara and Tom have friends living in nearby Logan, who stopped by for some conversation and laughs last night.  As we came in on Route 66 Barbara mentioned all the caches that were here, including a couple of their own.  By the way, for those who don't know, caching isn't just about finding buried treasure ... most, if not all, have descriptions of what took place on that spot some time in history.  If you are a history buff like I am, you're more interested in reading about the people and places, than finding the stash!!  Let's see what I can learn about this old motel!!!