You already know I'm a history buff ... especially when it comes to Cowboys and Indians.  This area had more of both than I ever imagined!!  Tuzigoot, Apache for crooked water, is the remnant of a Sinagua Indian village built between 1000 and 1400.  It sits on top of a mountain overlooking the Verde Valley.  These water jugs, originally discovered in an archeological "works" program dig, were restored to completeness with methods that weren't acceptable today.  They have since been taken apart, all the old glue and coverings removed and restored to the actual pieces found. 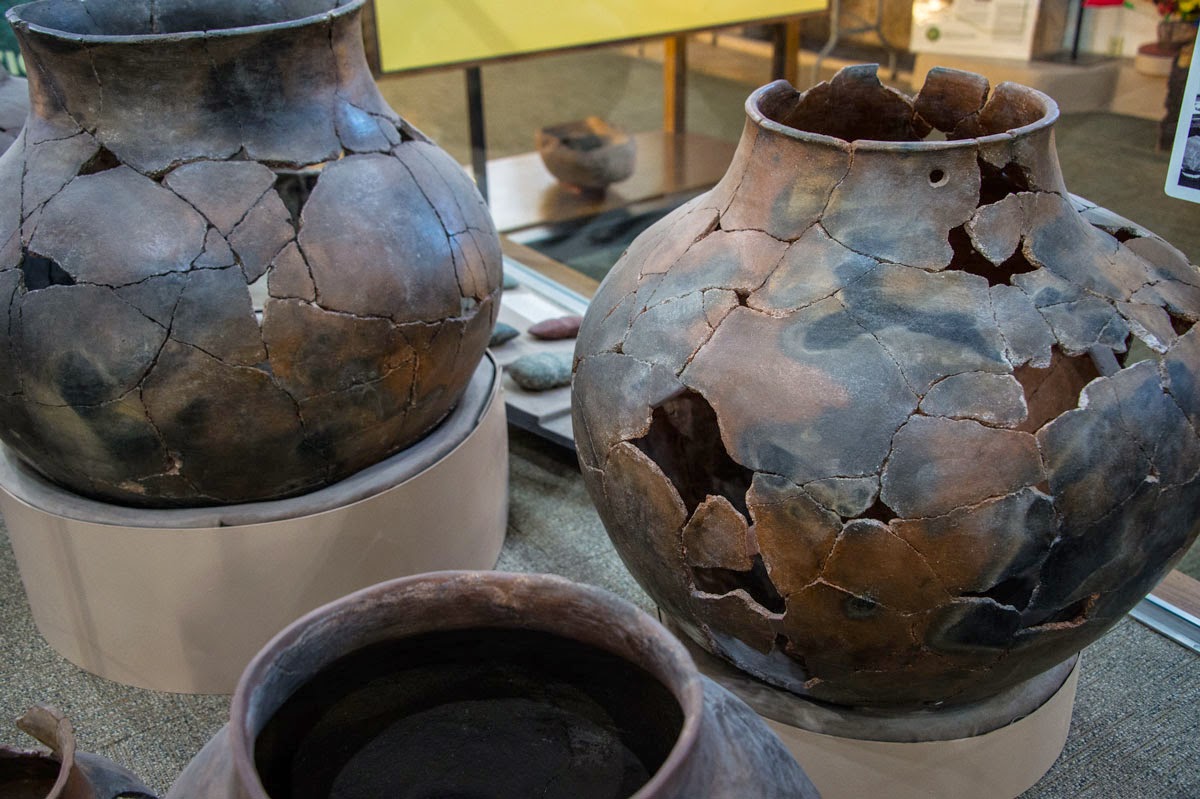 These pots with their different colors, come from different areas in Arizona. 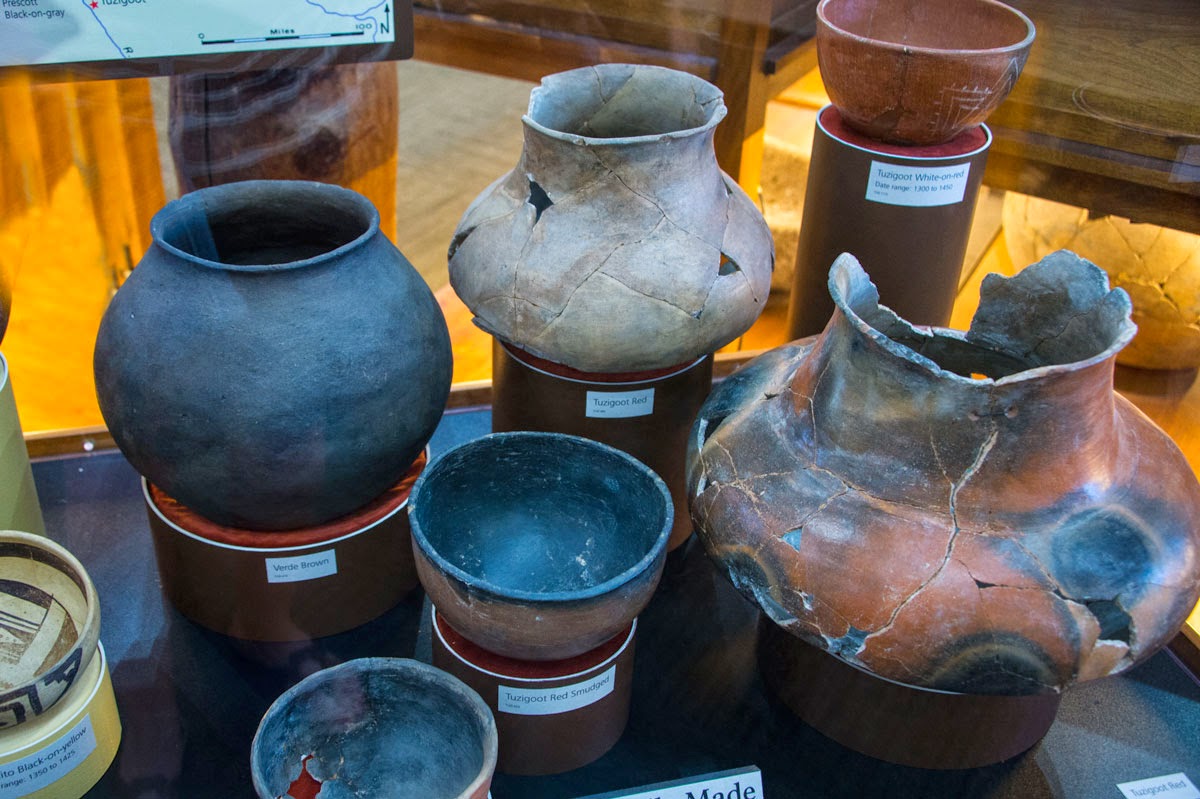 Eventually, with influence from other groups of settlers, these people evolved into farmers who grew crops for thousand of years and began building permanent residences.  The original pueblo was two stories high. 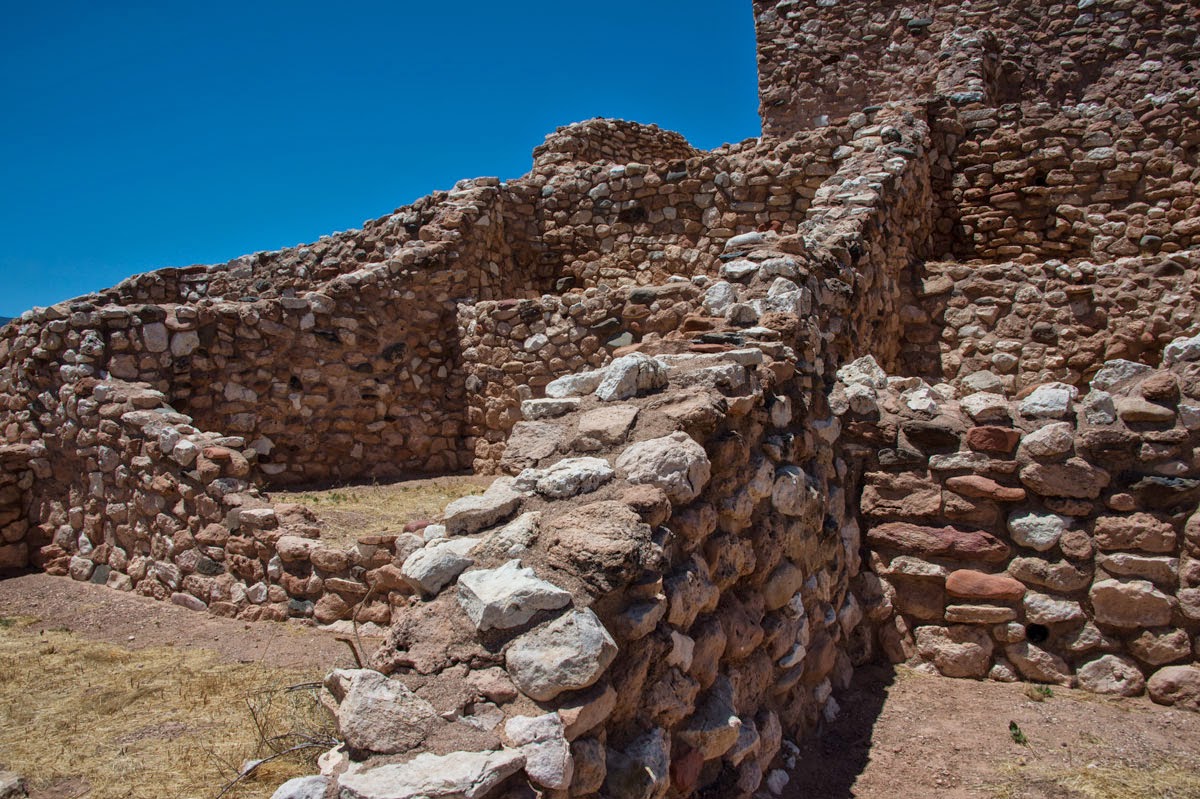 In practically every room ... or house ... were grinding rocks, used to create cornmeal.  Have you ever tried this??  I actually have many grinding rocks from the California foothills.  I got some dried corn and ground it up, making a flat tortilla that had so much sand in it from the grinding that it was inedible!!  This used to be a BIG rock ... you can see how deep it is now!!!  That's a LOT of sand to eat!! 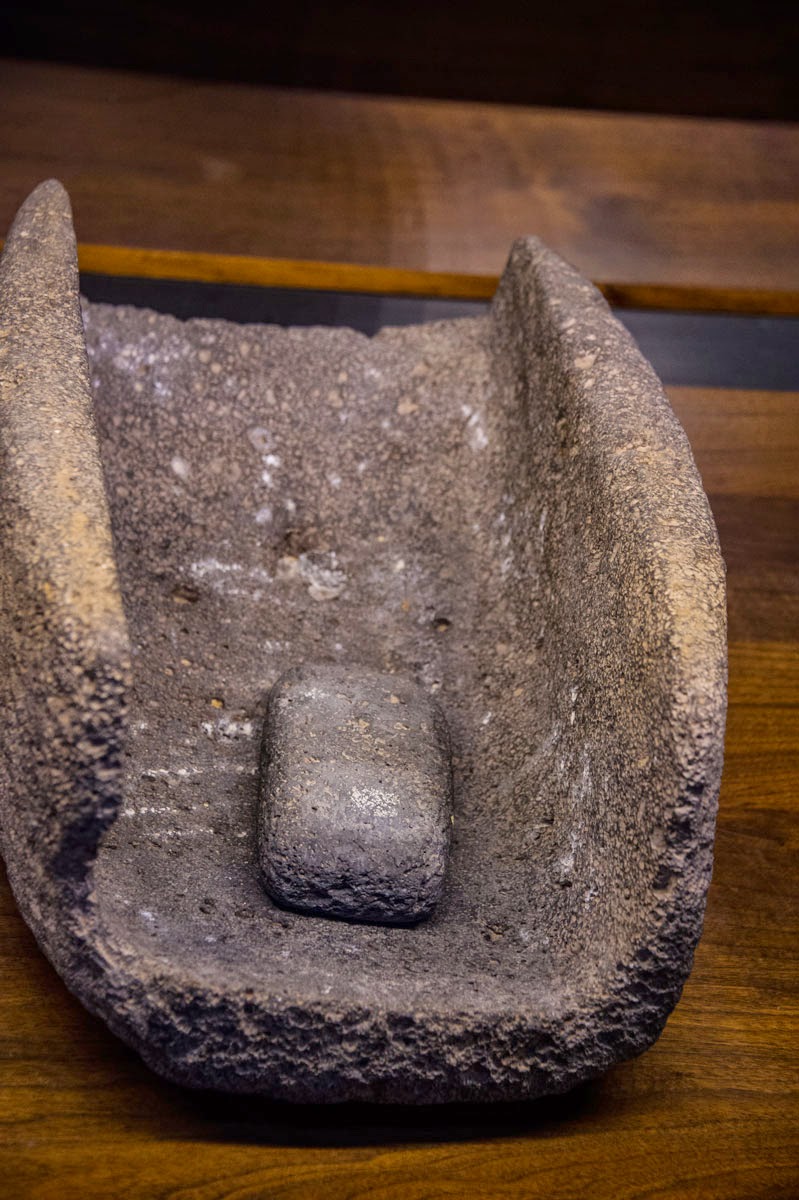 There were originally about 50 people who lived here, eventually growing in numbers to 200.  Eighty four rooms have been counted and it appears they are still uncovering more. 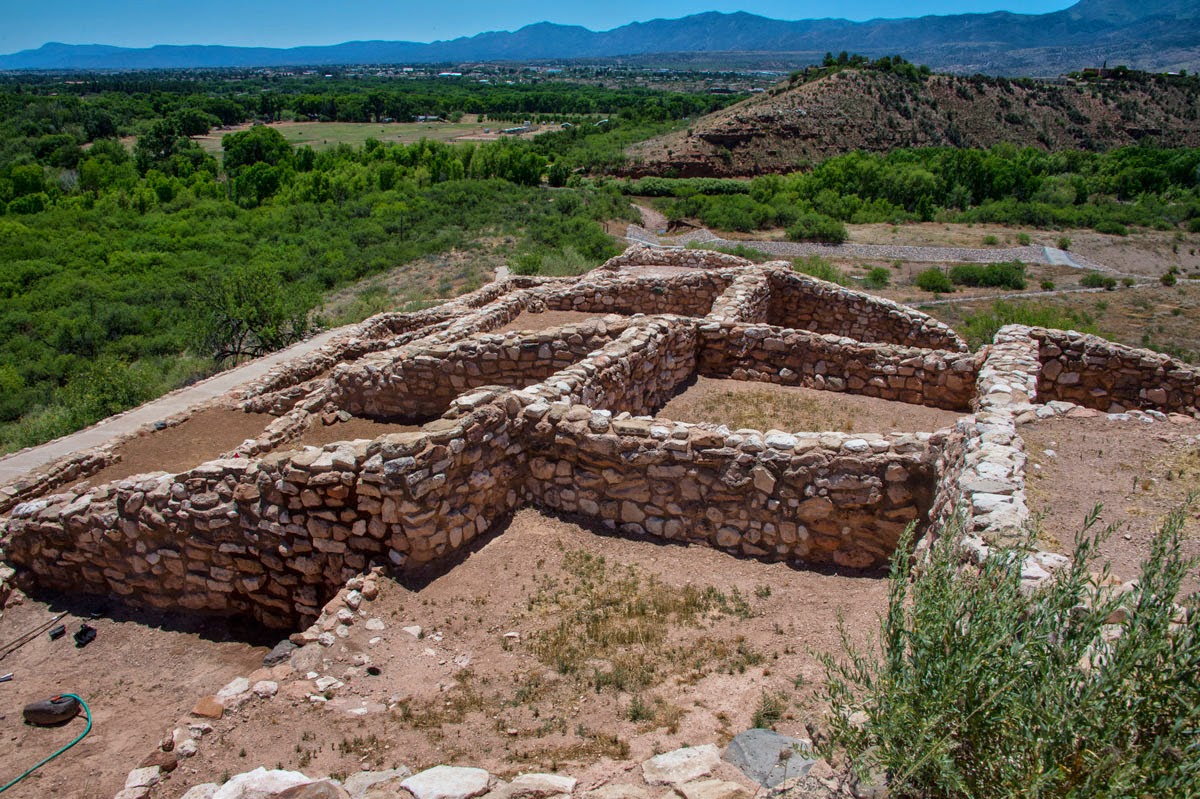 This re-creation of the roof structure shows what the inside ceiling might have looked like.  The only access was with tall ladders and a hole in the roof. 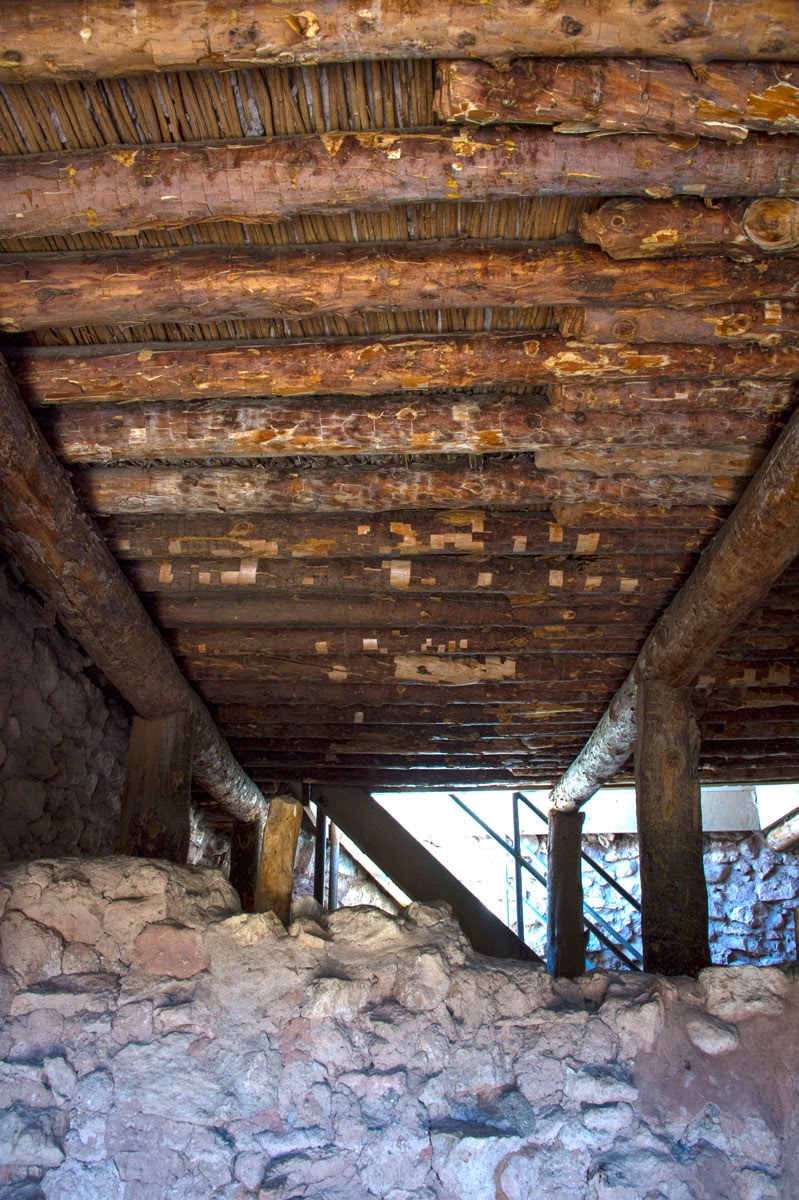 The higher you were on the hill, the more prestige you had.  These rooms cascade down the mountain towards the Verde River where they collected water for drinking and irrigation.  No one knows why they left ... guesses have been made that too many people created problems, and as many traveled on to greener pastures, there weren't enough left to maintain the canals for irrigation and crop growth.  With no food, they HAD to move on. 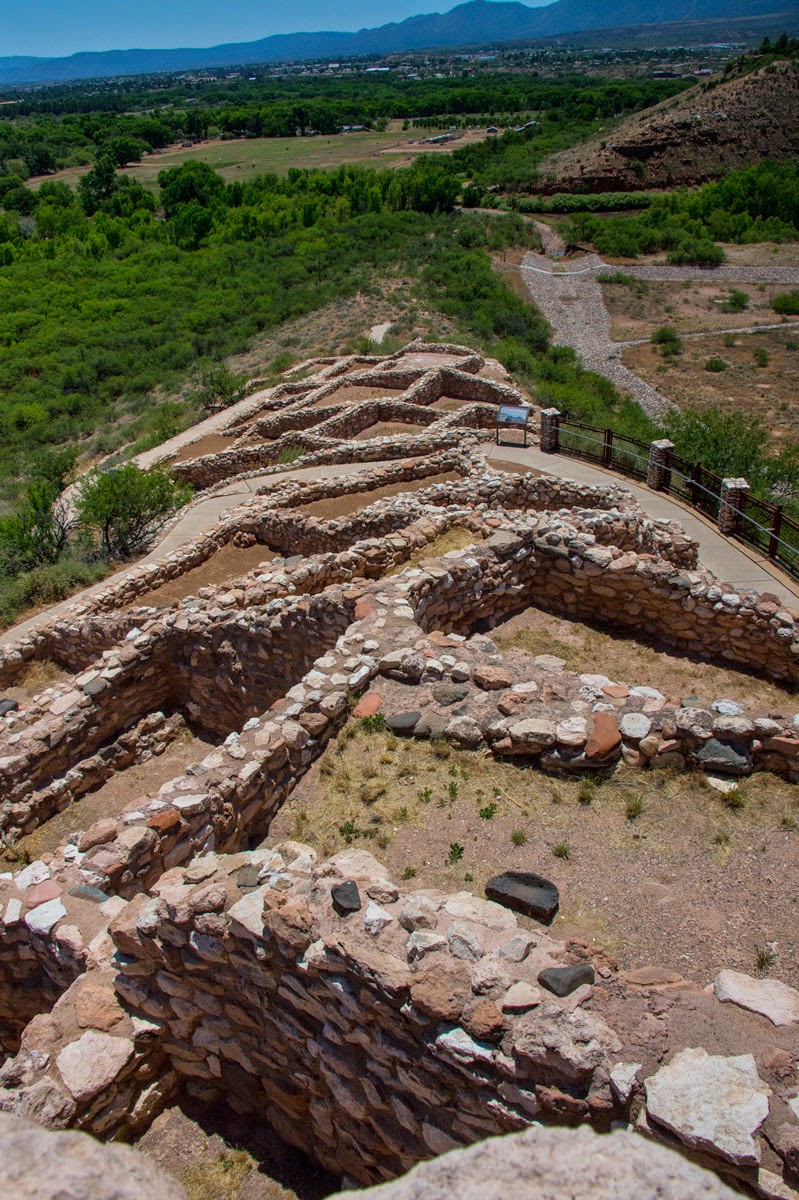 On the West side of the mountain is the remains of the toxic dump from the copper mine.  All the acids used to get the copper out of the rock, were deposited here with wooden pipes, devastating the area.  It became such a problem that they finally had to clean up the mess.  This is how far it has recuperated as of today. 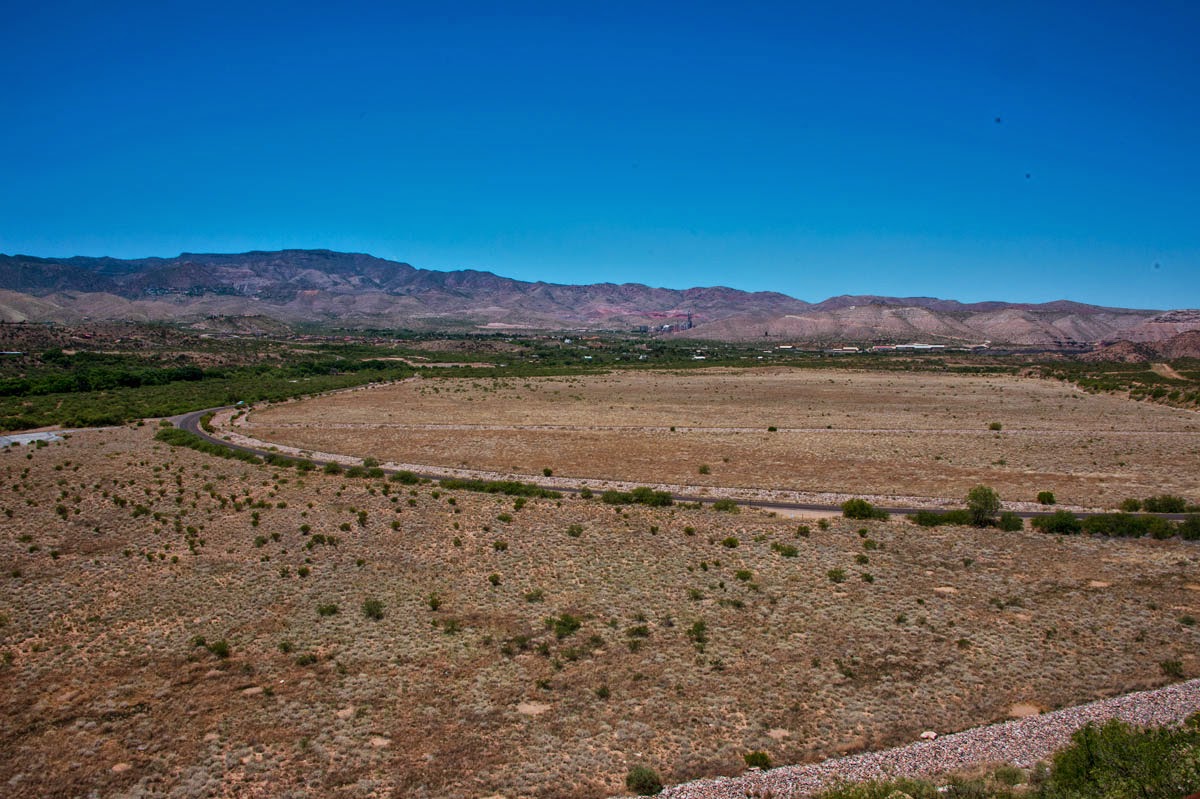 There were lots of local residents on the mountain and this guy was heading down the sidewalk.  I said "oh come on, just stop and let me take a picture" ... and he did!!!  It's funny how they do push-ups when stopped. 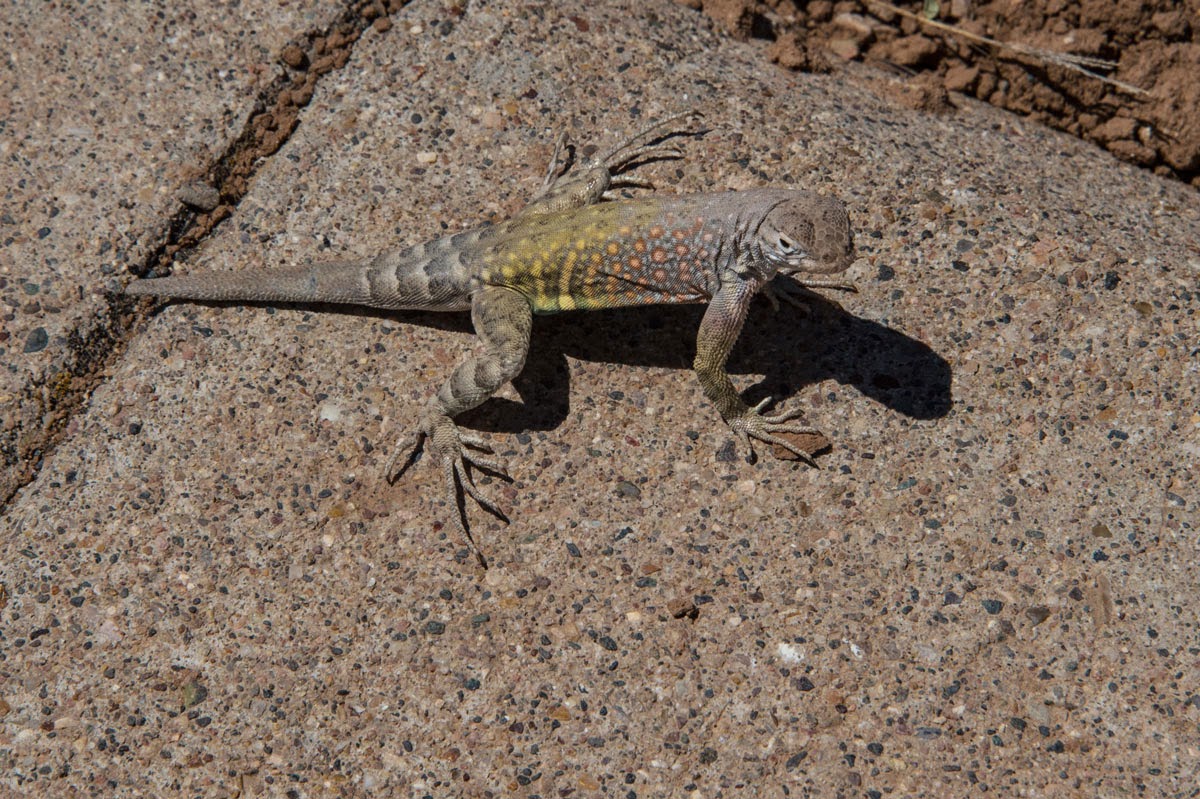 From Tuzigoot we made a beeline to Bings for FOOD!!!  A 50's type diner in an old service station, it is NOT "inexpensive".  My green salad, onion rings and chocolate shake came to $13.00.  The food was excellent, and trying to be good, I gave half the onion rings to Tom. The chocolate shake however, didn't rate any stars, but Barbara's root beer freeze was delicious she said!! 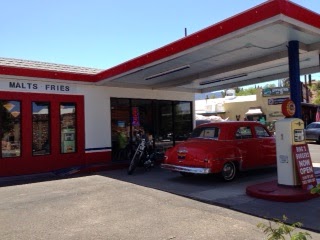 Next up, a short drive to the museum in Clarkdale where a great miniature train display has been set up depicting all the original rail systems here in the valley.  We soon discovered that Wednesday is NOT a good museum day as they are ALL closed!!  No problem, we'll just head out to Fort Verde, or Camp Verde as the town is now known.

To our disappointment, it's Wednesday and they too are CLOSED!!!  I volunteered to work camp and keep them open all week, but no one was around to hear me!!  No matter, we can at least walk the parade grounds and see the four remaining buildings.    Here's an old picture of the original fort.  Unlike our motion picture image of forts with stockades with fences all around, these forts were just a cluster of buildings with generally 200 men living in them. 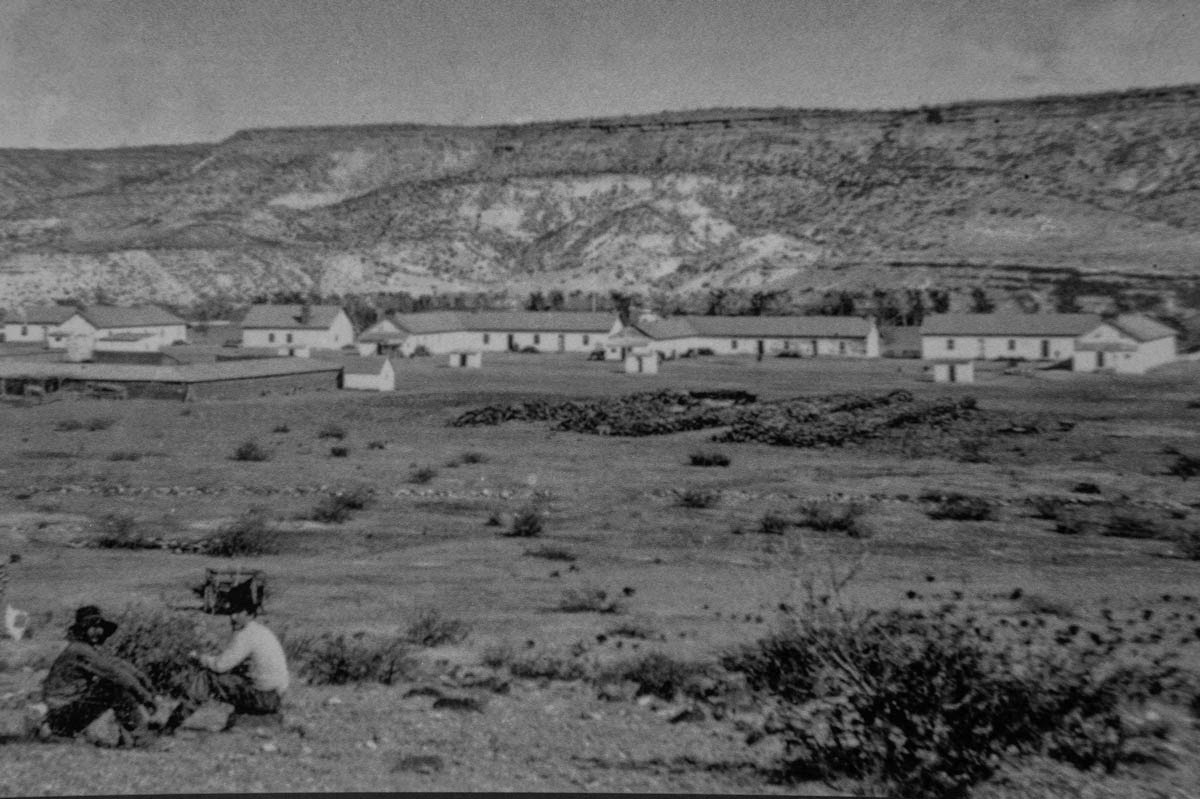 The Commanders house was the biggest and fanciest.  This is what it used to look like many many years ago. 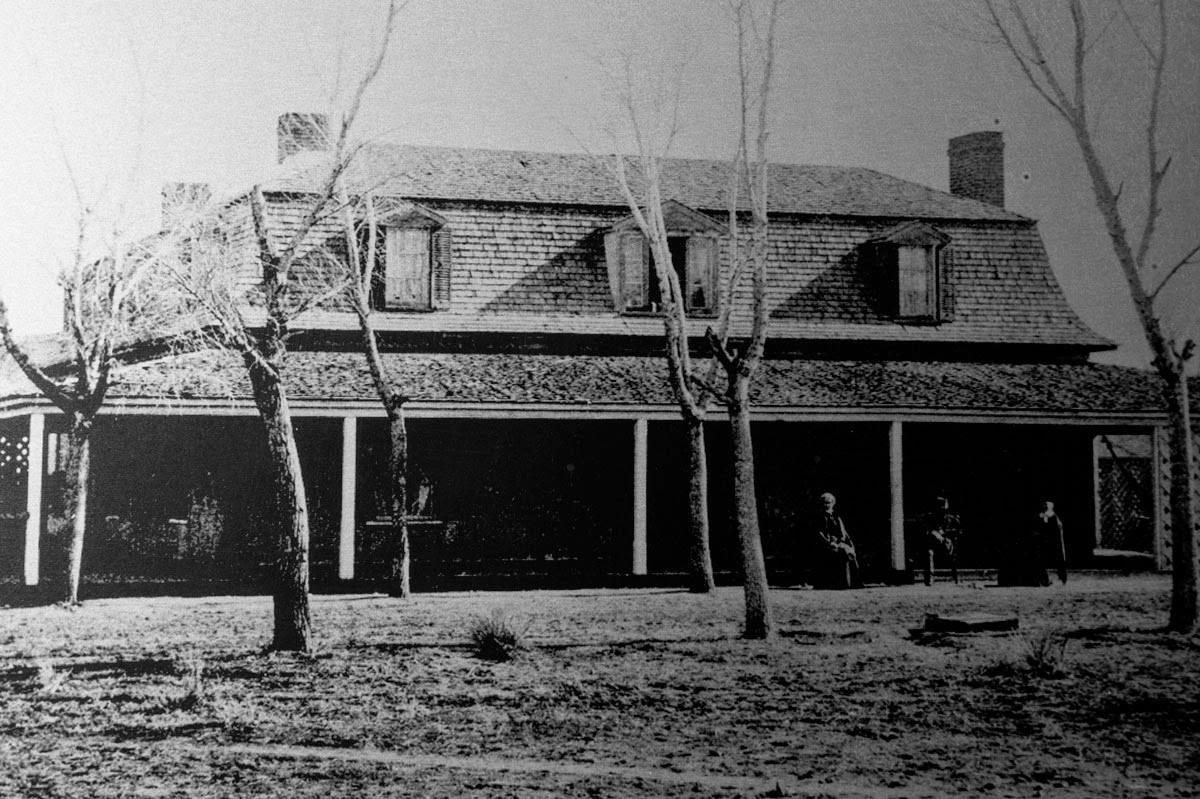 This is what it looks like today.  I made these images black and white for comparison to the older versions.  Made of adobe and covered with 1x12's, it must have been pretty cool inside with the wide porch blocking most of the sun.  We looked through the double-hung windows to see small rooms, sparsely furnished.  Too bad they aren't open so we could actually enter the buildings!! 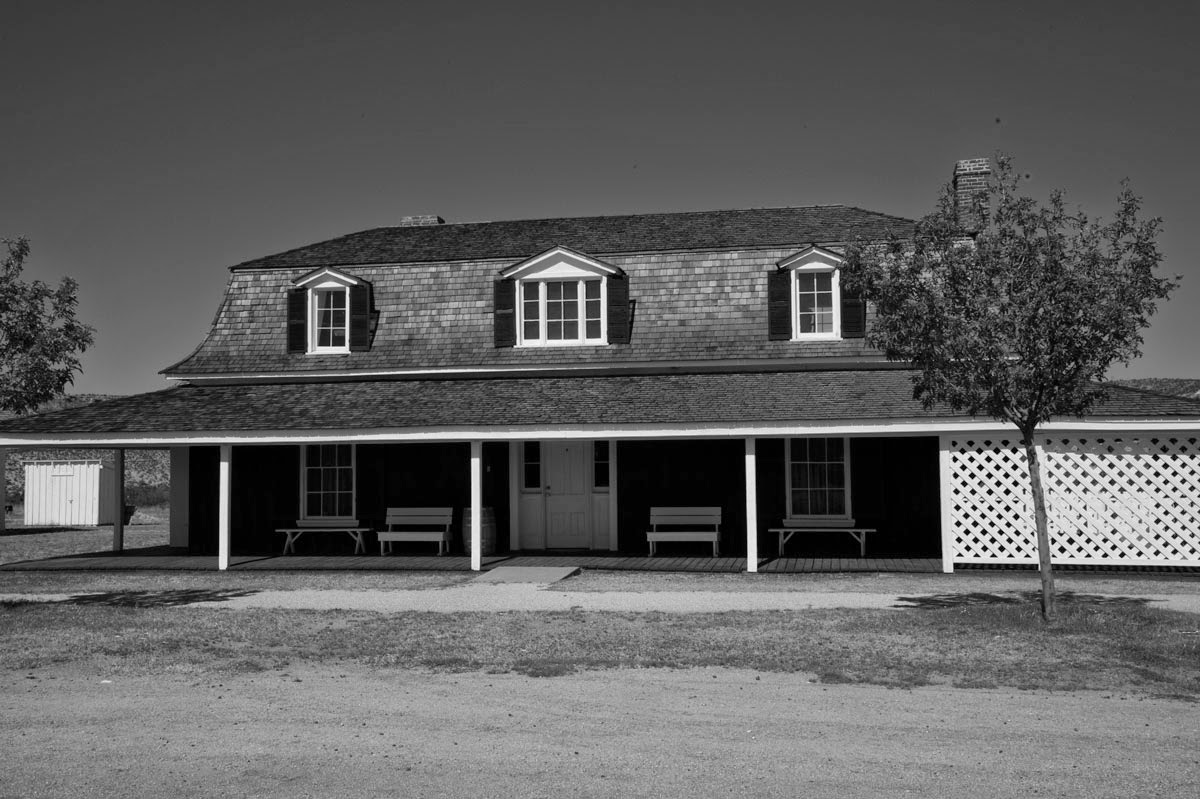 The plank covering on the outside was originally installed with square head nails.  Some of the knotholes were covered with tin can lids ... one of my dad's old tricks to keep rodents out. 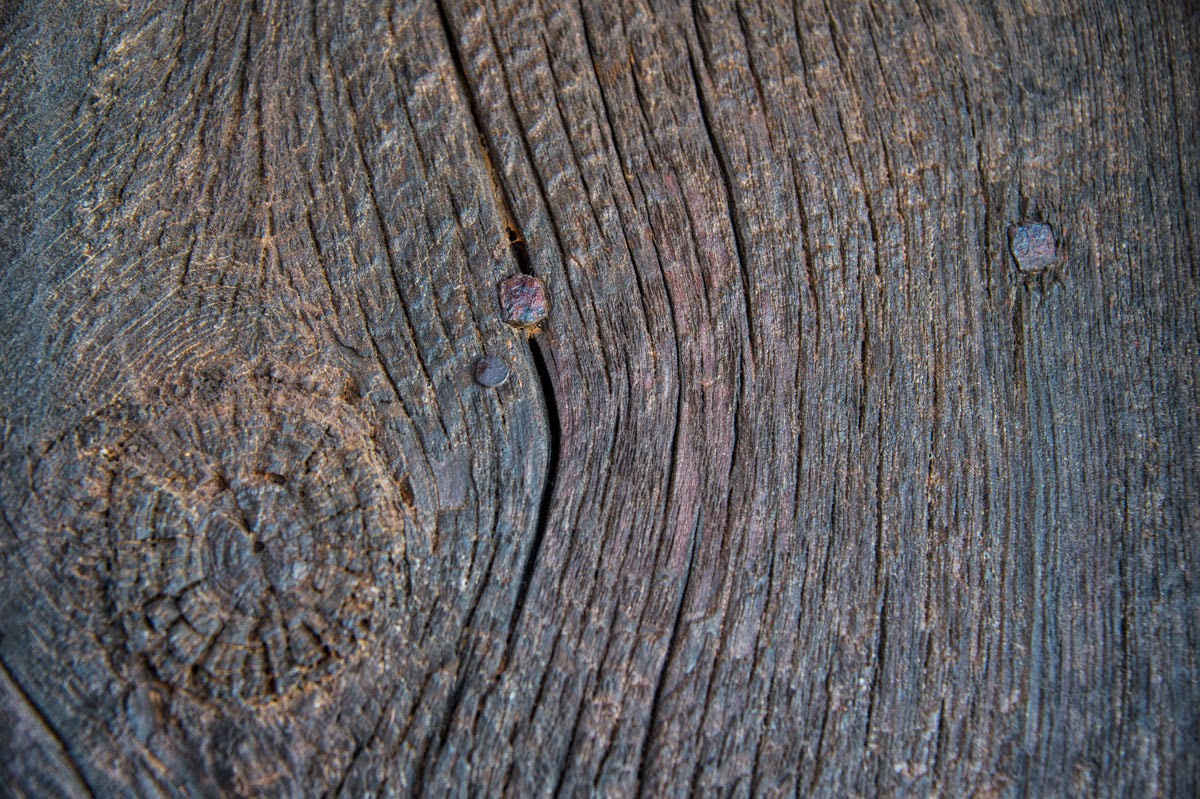 The surgeons house was extra large ... but inside were his quarters, the operating room and the infirmary for recovering patients.  Several of the pictures displayed show the women on horseback in front of the homes ... sidesaddle of course!! 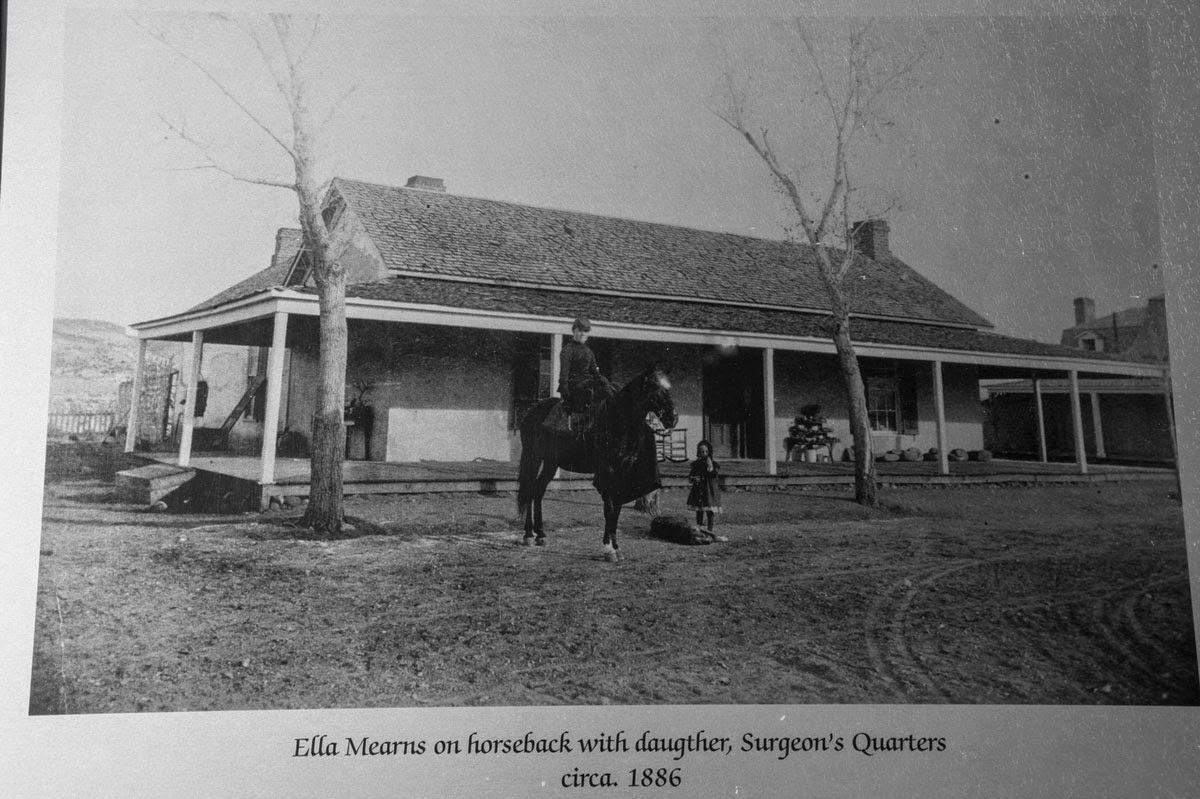 The surgeons house as it looks today.  Not sure I would like to have him work on me ... he was the roughest scroungiest looking guy in the group picture!! 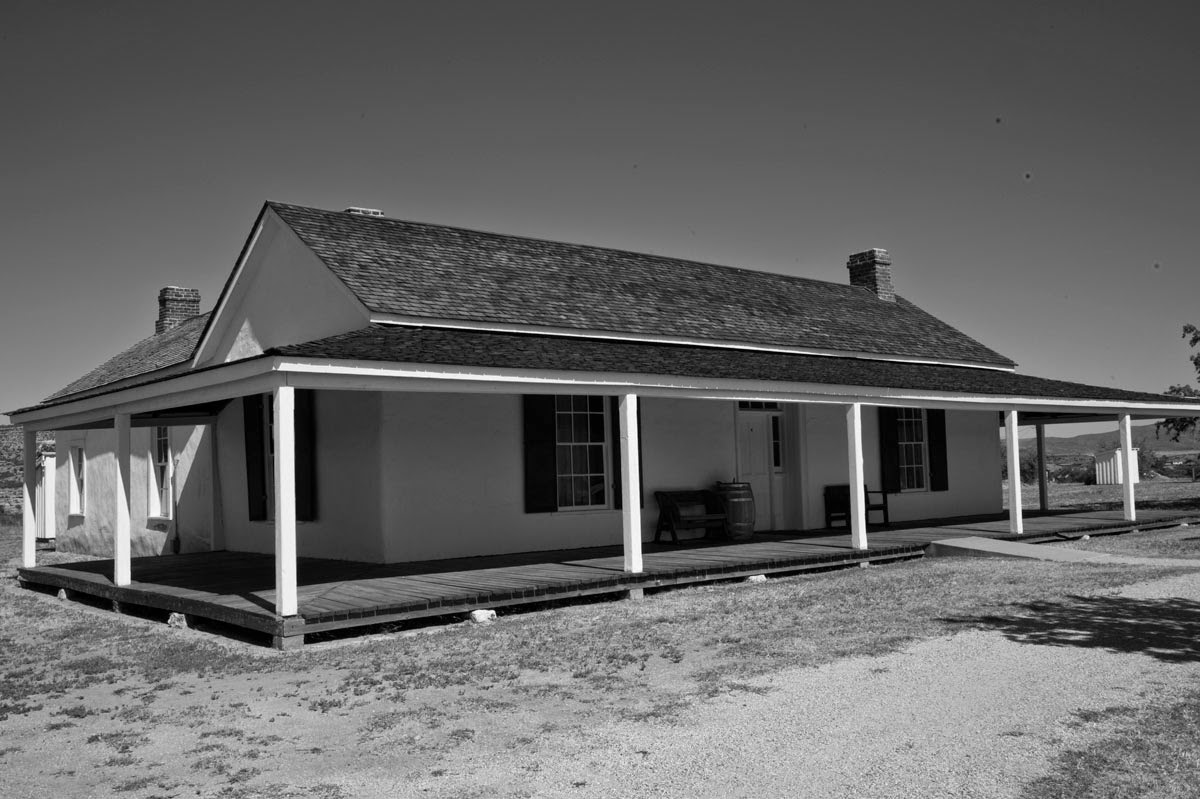 The parade grounds are huge with the flag pole in the middle.  It looks like an old ships mast.  I'd love to be part of a group of re-enactment characters here.  Course I'd be on a horse, not in the kitchen!! 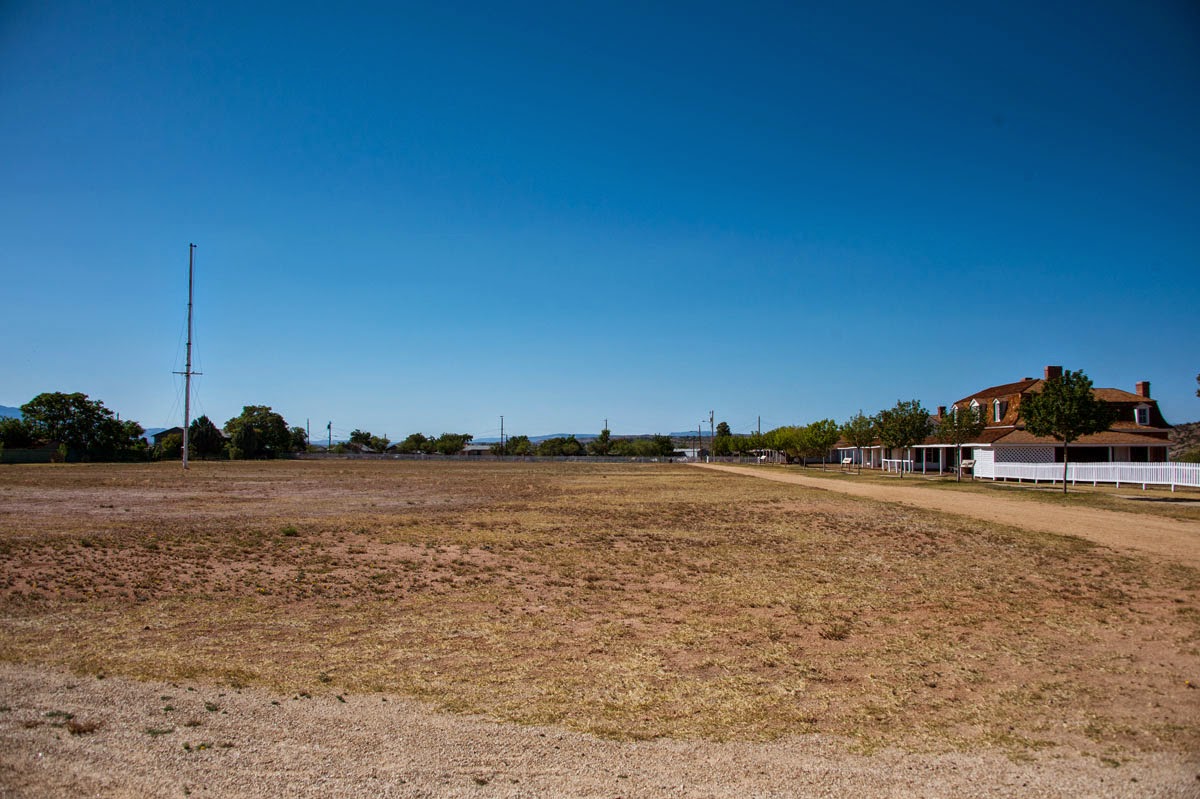 More local characters were out looking for dinner. 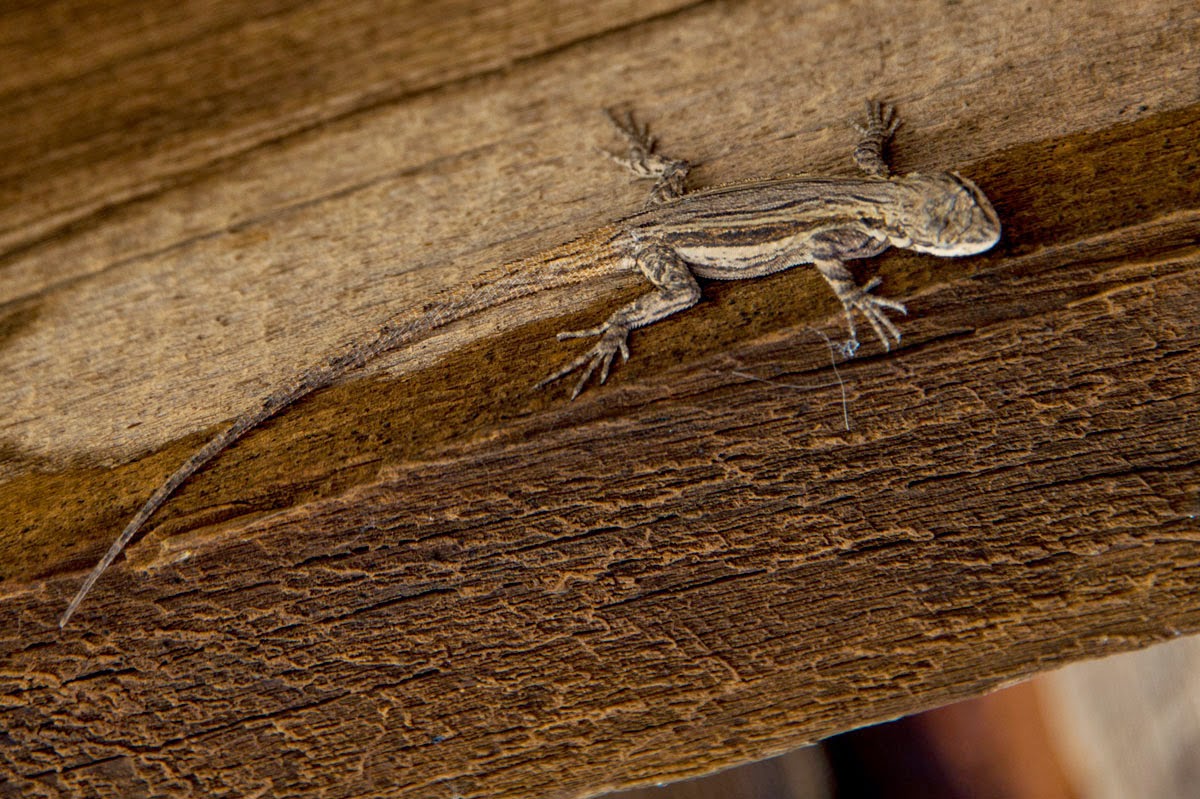 We've decided to extend our stay one more day to give us time to straighten up our rigs and do some wash.  Those color catchers aren't what they are cracked up to be.  My once beautiful white Golden Spike shirt is now pink, even though I bleached it TWICE more after the color catcher fail!!!  When this blog finally loads in about an hour, I'm heading to the Cowboy store.  I didn't know you could buy cowboys here!!!  We'll see if they have my model available!!

Posted by Nancy Kissack at 7:34 AM