It was time to leave the noisy city and head to the quieter desert area of the Salton Sea.  Since we found one easy cash next to the freeway the day before under the top cap of this fence,  we set out to find another one near the old Red Line trolley rails.  It was an easy find and resulted in maybe a half mile hike ... hmmmm this may turn out to be a good exercise in exercise!! 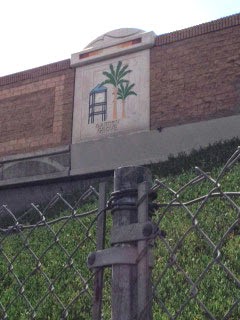 We braved the terrible LA traffic and skirted around the 215 disaster where the overpass bridge, under construction for two years, burned to the ground, aiming for Indio and the Salton Sea.  It wasn't the wind we had to look out for, it was the road construction and the truckers. 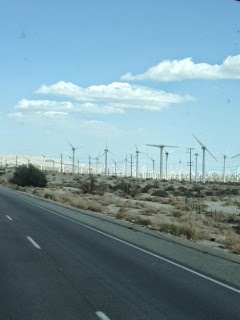 We arrived at the VERY windy Salton Sea State Park to find two of thirteen spaces filled, so we pretty much had our choice of spots.  That's me on the left at the very end.  Full hookups here are $28 per night with senior discounts. 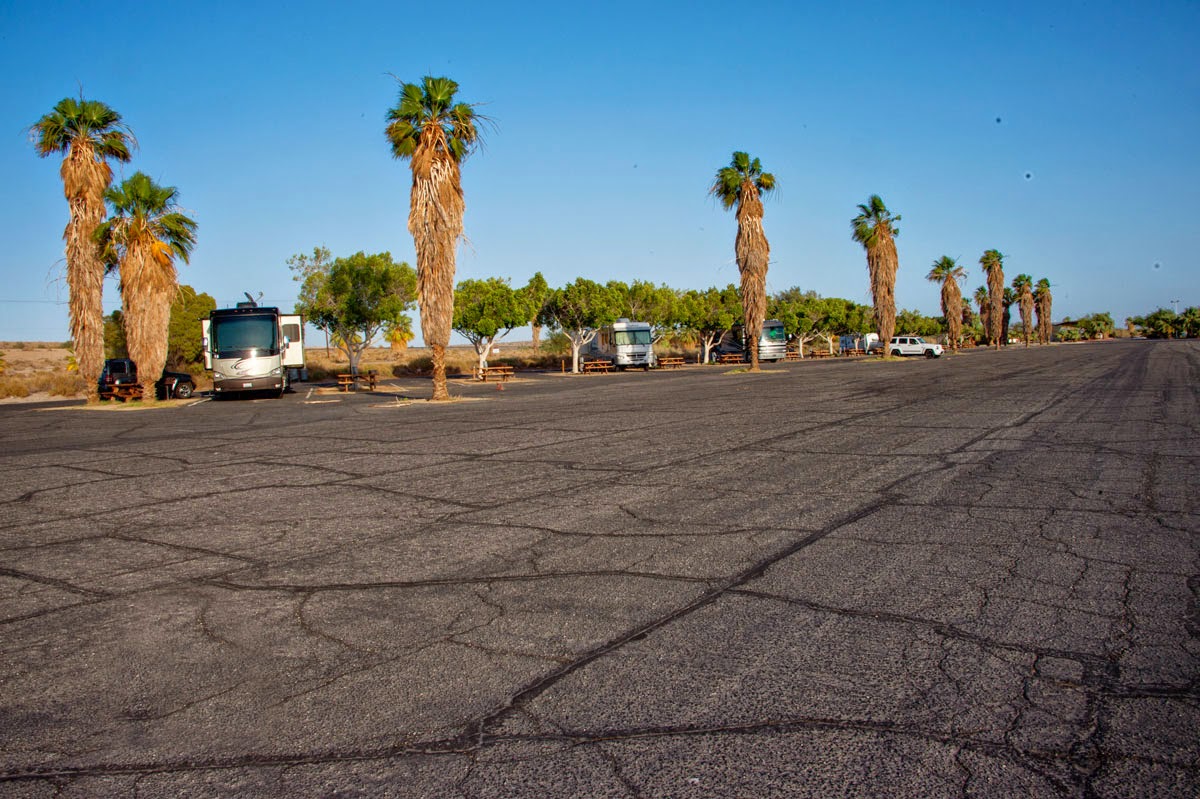 When we arrived, Tom told me what looked like sand was actually fish bones.  Really??  Looks like sand to me ... but later when I walked to the "beach", I found he was correct.  I knew there were a lot of fish dying here due to the increased saltiness of the water ... but this is CRAZY!!! 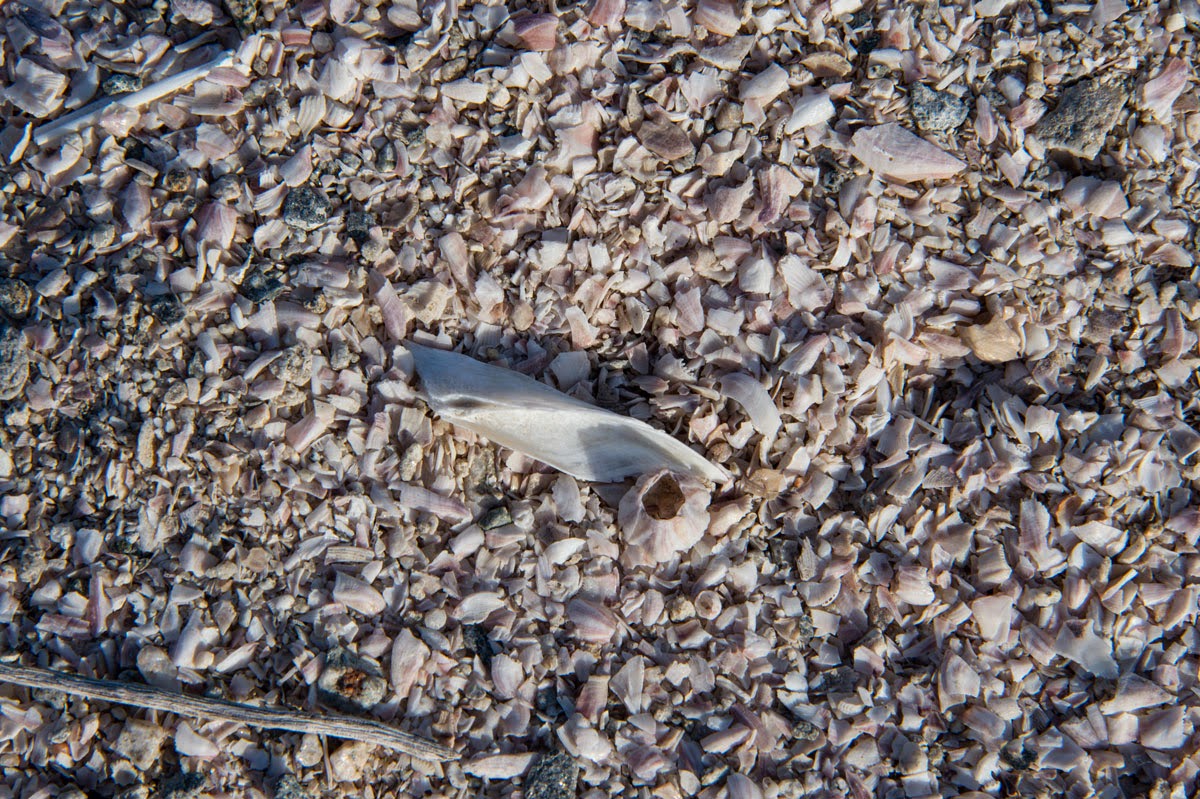 The shoreline was covered with seagulls, all vying for the tastiest morsel to come floating up on the waves. 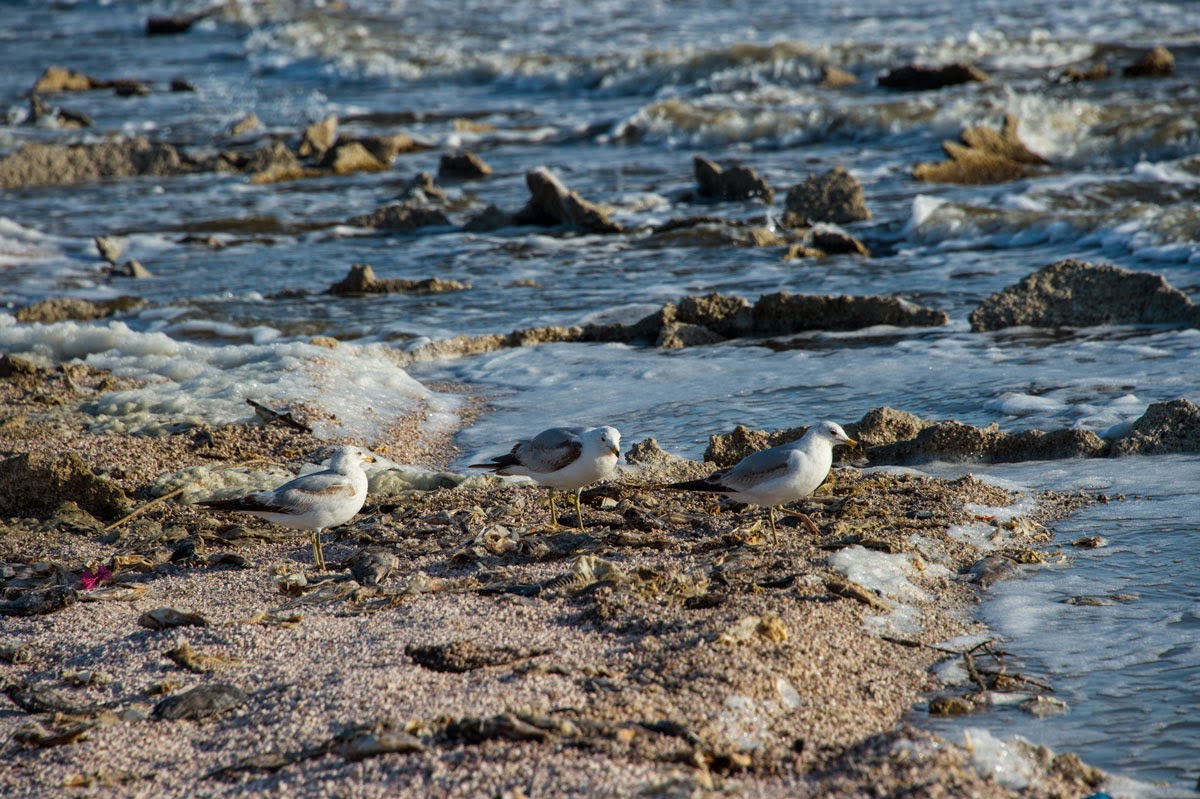 Not exactly like being next to the ocean, but there is a distinctive "ocean" smell ... actually it's just the dead fish.  They are EVERYWHERE!!!  I'm soooo shocked to see so many recently deceased!!!  I've seen it on television, but had no idea that it was an ongoing problem.  They planted Tilapia that people fish for on a daily basis ... but the water is even too salty for THEM!!  I figured they were ALL dead by now ... but apparently a few survive!! 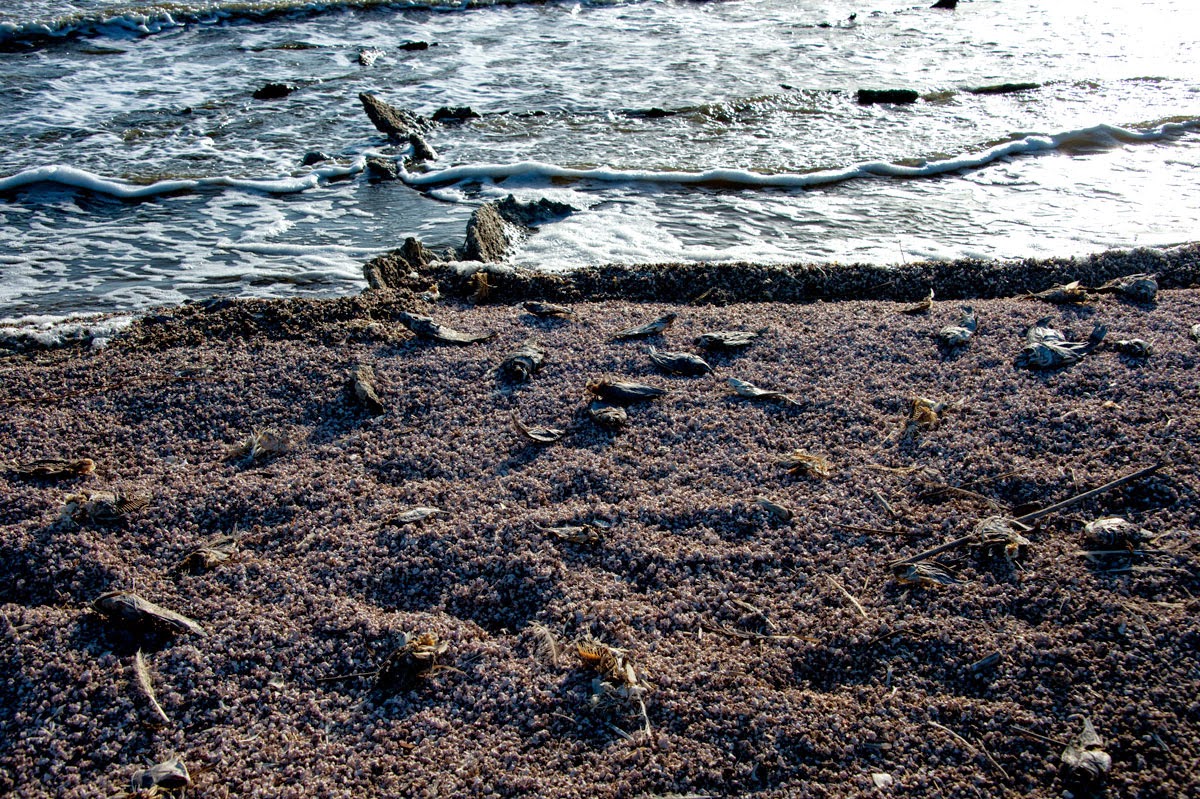 The wind is really bad now, as you can see from the waves crashing on shore!! 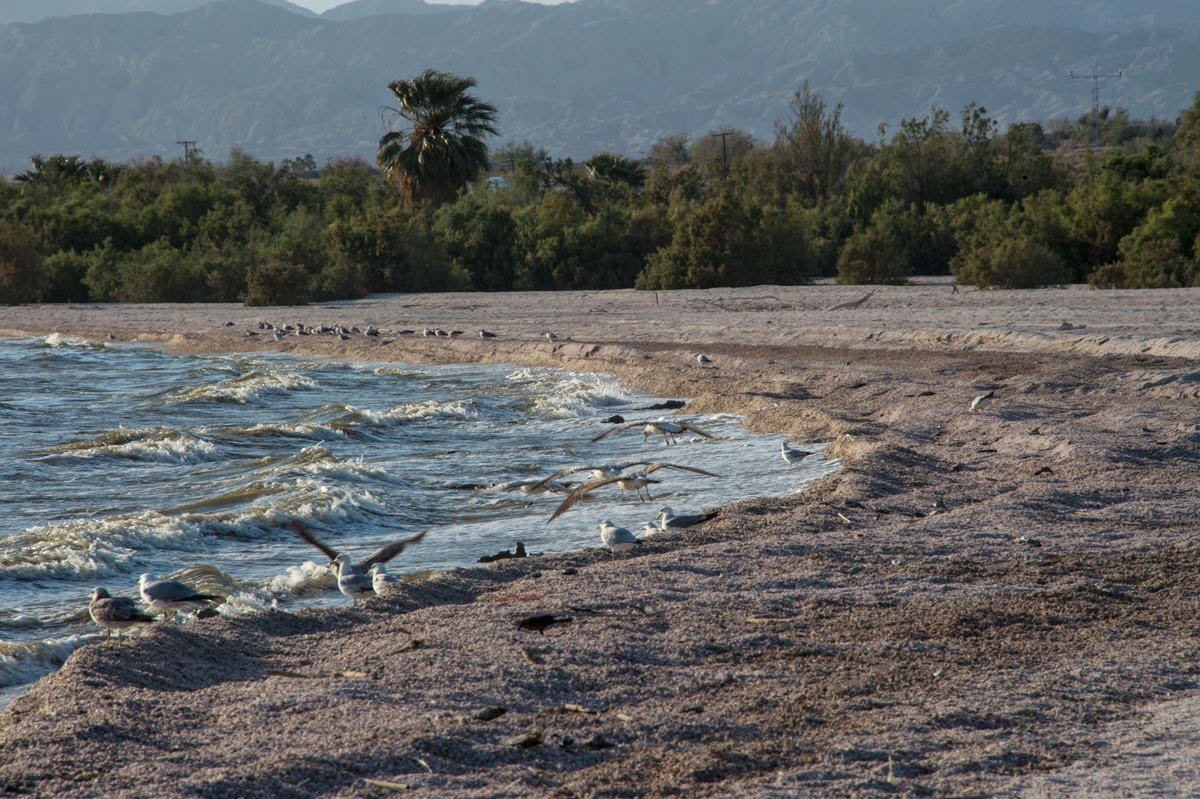 They should call this Bone Beach ... from here to the waters edge, looking like sand, is millions upon millions of fish bones, maybe two feet deep.  It just staggers the mind to imagine how many fish have been deposited here!!! 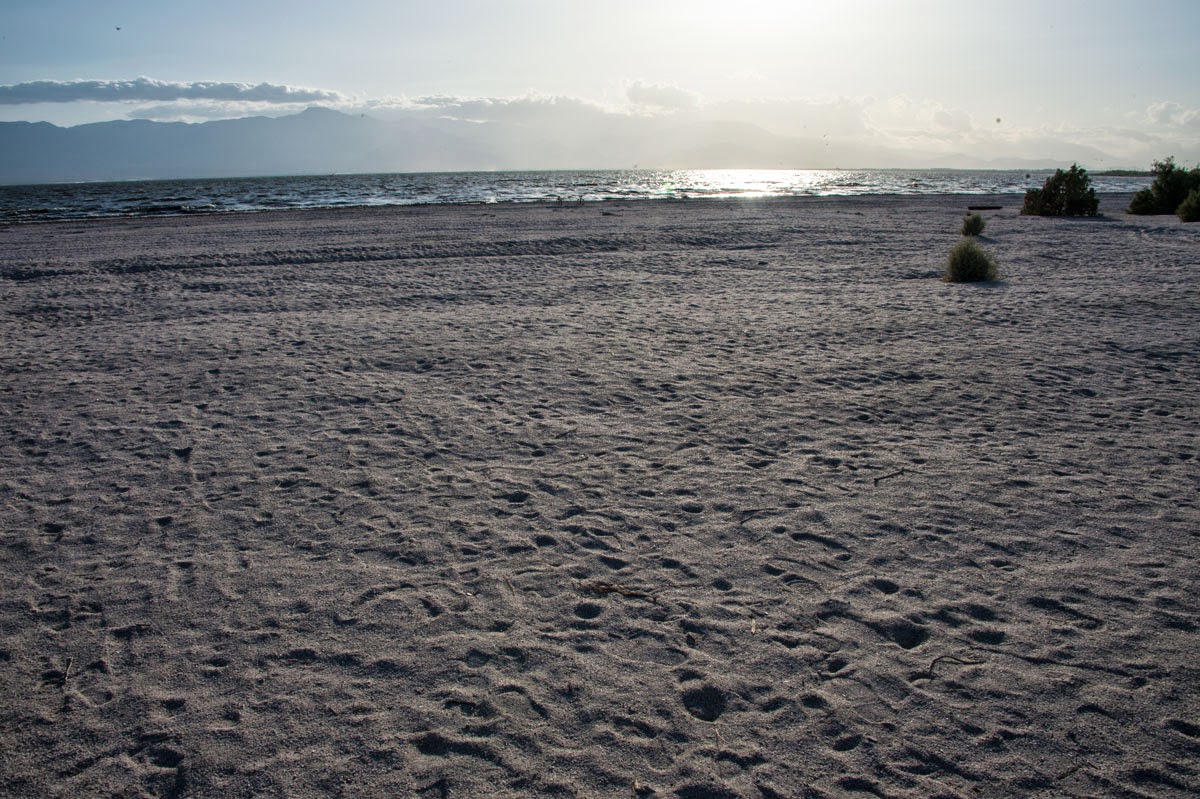 By 9:00 pm the wind kicked up a notch, enough to flap my slide-out toppers so hard it felt like someone was hitting the side of the rig with a mallet.  Between that noise and the 25 trains that went by, it was almost midnight when I got up, pulled in all the slides and took a sleeping pill!!!  No matter, I'll take a nap this afternoon!!!

By 5:00 am the wind was gone and it was peacefully quiet, but it was play time for Cooper.  Two hours of internet service lockups and six freight trains later, I've finally finished the blog for the day.   I have a long list of "stuff" to pick up in town, which we'll do before we head out on our adventure for today!!!