The Ghost Of Tucumcari!!

You know that bad ghost that took up residence in the Westerfield's rig last year??  Well he found me yesterday morning and is wreaking havoc on my rig now!!!  How irritating is that???  Yesterday morning my Progressive system protector starting kicking on and off and when I checked my inside, small plug-in voltmeter, it was pegged!  I raced back outside to unplug from the post, thinking it was the RV park.  When Tom and Barbara came over later, we tried every combination we could of 50 amp, 30 amp, inverter, no inverter ... nothing worked.  The RV host brought his meter out, and the post appeared to be fine ... all the readings were correct.  Must be the rig!!

I called Tiffin who said to do a hard reset on the inverter.  It took us an hour to even find it ... but eventually we were able to complete that maneuver and plug back into the 30 amp.  It's working ... but only if the inverter is off.   At least the AC was working for the dogs!!  I called around and finally got an appointment in Wichita Kansas at a Cummins Coach Care to check it out.  So we left to visit the local Museum, giving the ghost plenty of time to set up housekeeping!!

The museum is in an old brick school building with this windmill out front.  The fans are made of wood!! 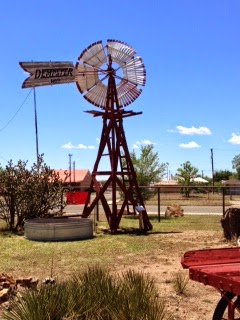 Inside, this building has three floors, with more antiques and one-of-a-kind items stacked floor to ceiling than I've ever seen ANYWHERE!!  Entire family picture albums that you can flip through, including some showing 5-Mile Park with it's amazing swimming pool.  On the stove below, on the left, is the earliest pressure cooker I've every seen! 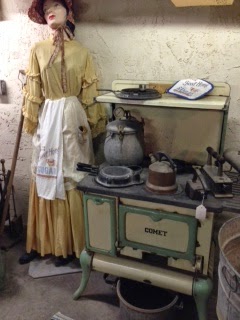 A round ice box with lazy susan shelves .. anyone ever seen that??  As I walked around looking at things I had never seen before, I was distracted by the electrical problem in my rig.  I just kept having this nagging feeling. 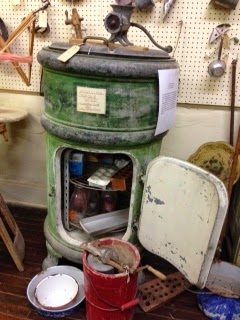 Now here's a machine for you ... a Permanent Wave Machine!!  Yikes!!!  I can't imagine being wired up to this monster and plugged in to electricity!!! 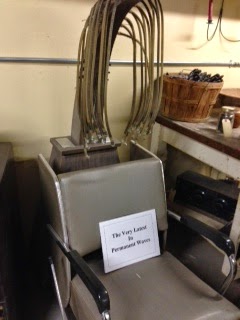 Around the main building are several other buildings full of everything imaginable, and surrounded by covered wagons, fresno plows and VERY old equipment for bailing hay and tilling the fields. 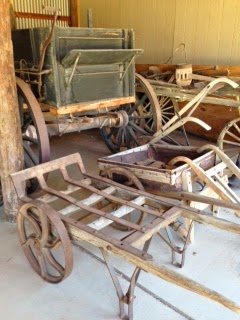 This particular building had a roulette wheel from one of the old saloons. 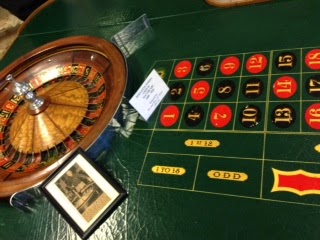 Here was an amazing piece, made by Wurlitzer.  It's a juke box of sorts, playing old 78 rpm records.  What a beautiful piece of art!! 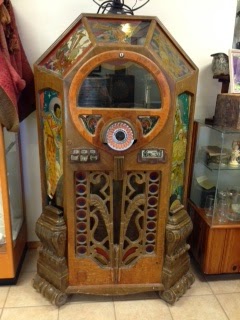 Here is an early 1900's fire engine that needed dusting!!  Honestly, there is so much stuff in this museum that the two or three people that keep it going don't even have time to keep it dusted. 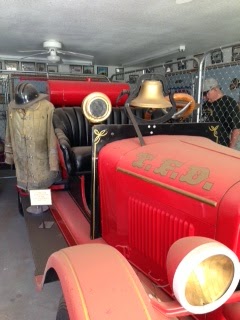 On the grounds, they also have an old caboose, donated by Southern Pacific, that is completely intact inside, including a toilet, beds and leather seats that are still in great condition. 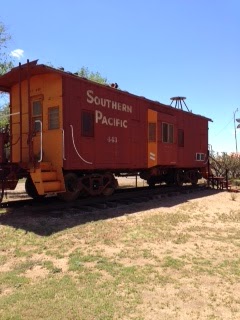 This is the wood stove the train crew would cook on.  All around the walls are instructions on the use of various items ... like NEVER flush the toilet when at a crossing or parked at a station (because in the old days, it just fell down on the tracks ... there was no "containment" like today). 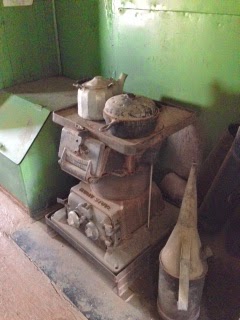 I'm restless ... not feeling very good ... and still worried about the power problem, but we went to Rockin' Y for lunch/dinner and had a great meal with the friendliest people!!!   They serve chicken strips with GRAVY!!!  Not barbecue, or honey mustard, or ranch .... chicken GRAVY!!!  Boy were those good!!!

Back at the rig, Barbara and Tom's friend Steve (from Johns Truck Service) stopped by to visit after having done a radiator flush on their rig.  When he offered to check out my electrical, I said sure.  He found nothing ... NOTHING!!  With an $800 meter, he checked everything and it all seemed fine.  We even plugged into the 50 amp service and it was ok!!  When he left at 9:00, I was still leery, but decided it was just a ghosty.  BAD decision ... BAD!!  I should have left it on 30 amp.

At 10:54 my carbon monoxide alarm went off ... I jumped up and hit the reset button!!  Nothing like a rude awakening.  Just as I fell asleep again, the circuit breaker kicked on and off twice.  I raced outside and flipped the breaker off.  So much for everything working!!  I left the inverter off and went back to sleep.  This morning at 5:30, I tried plugging into the 30 amp again, praying it would work.  No such luck!!  I threw the cord on the ground, went inside and said "might as well replace everything" ... and turned on the inverter.  It's working perfectly!!  Course my batteries won't hold out long ... maybe the generator will work THIS time!!  Frustrating to say the least ... and now we must reroute to Wichita to get it fixed.  Much as I love my RV, I'm not cut out for ghosts invading my space, so I'm asking everyone to get out their little voodoo dolls and help me chase him off while I down a few more Excedrin Migraine pills!!!