There's nothing like being wakened by the Union Pacific at 5:00 every morning as they pass the dirt road train crossing where I've NEVER seen any vehicles!!!  Unlike Fullerton, these guys go full bore on the train whistle!!!  Cooper jumps up like a shot and the ball game is on!!! 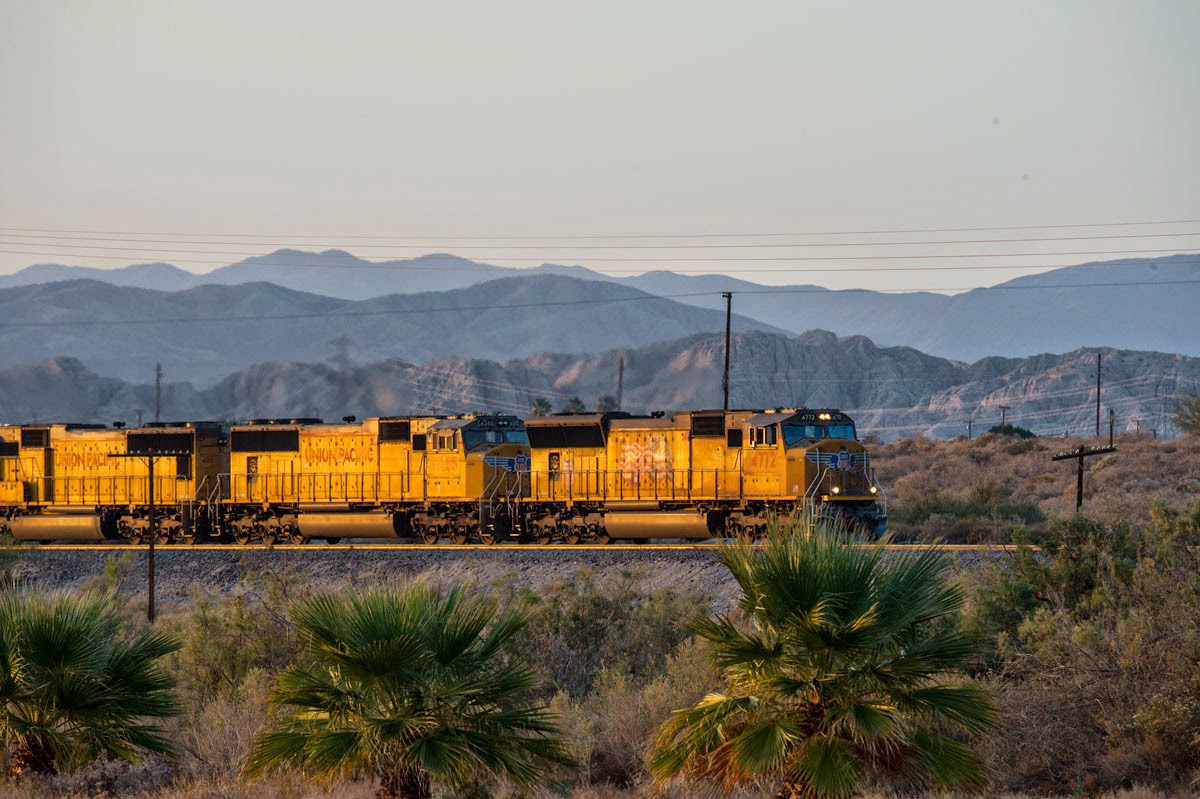 We took a quick look at the Salton Sea Visitors Center yesterday morning ... turns out it was the only look we would get.  The center was closed until Saturday, but two buses of school kids had them open temporarily.  We watched a short movie on the making of the sea ... who knew there were hurricanes here that flooded most of the houses on this side of the lake?  They had several books I wanted to purchase, but actually being closed, could only take cash, and the exact amount at that.   That didn't keep this little pack rat from sneaking into MY pack however.  A trip to Indio is a must now ... I'm out of cash!! 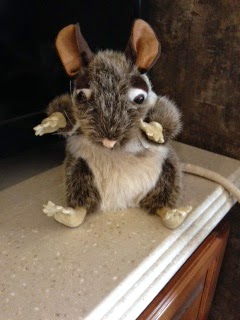 We made a quick Costco stop so Tom could pick up new batteries.  Running an extension cord from my rig to theirs wasn't a good option!!  We ate at Shields Date Shake House ... where I did NOT have a date shake ... but a great BLT.  Walmart provided me with a Midland weather radio so I will know when to duck my head while those tornados pass over, as well as a scale so I don't let my diet get out of hand.  I almost had a heart attack when I first stepped on it!!  In reading the documentation, the first step on just balances it ... from there on it should read correct!!  Whew!!!  That was a close one!! 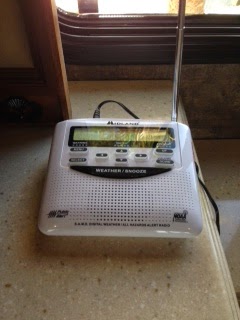 Back at the sea, I walked the beach of bones trying to get some pelican images.  I might have been successful except for the fishing boat that went out right through the middle of the group, scattering them far and wide.  The birds here are VERY skittish ... I couldn't even begin to get close.  My telephoto lens helped, but it's so heavy, the strong winds kept me from having sharp images!! 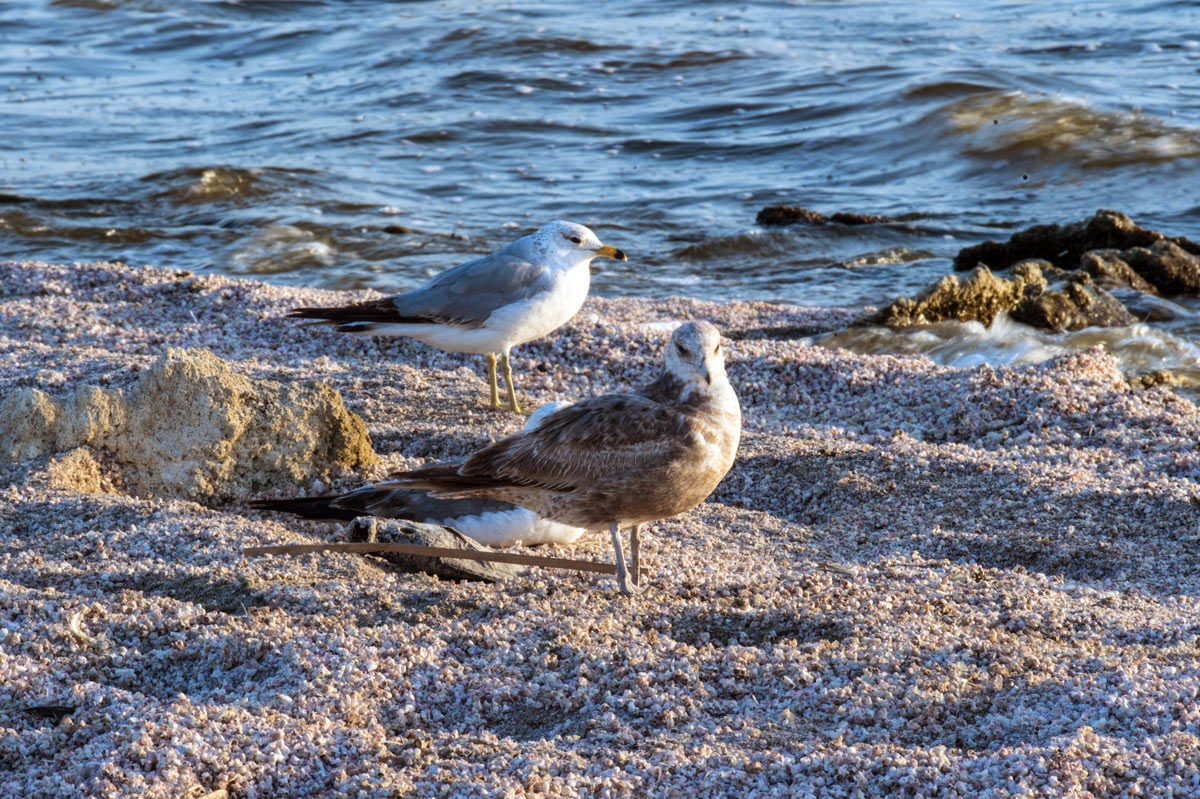 I just can't get over the bones on this beach.  The Salton Sea short movie said there are over 400 million fish in the lake ... which die off periodically due to shortage of food and agriculture related chemicals in the water limiting oxygen.  It's just the most amazing thing I've seen.  If you ever come to the Southern California Indio area, stop in at the North Shore and take a look. 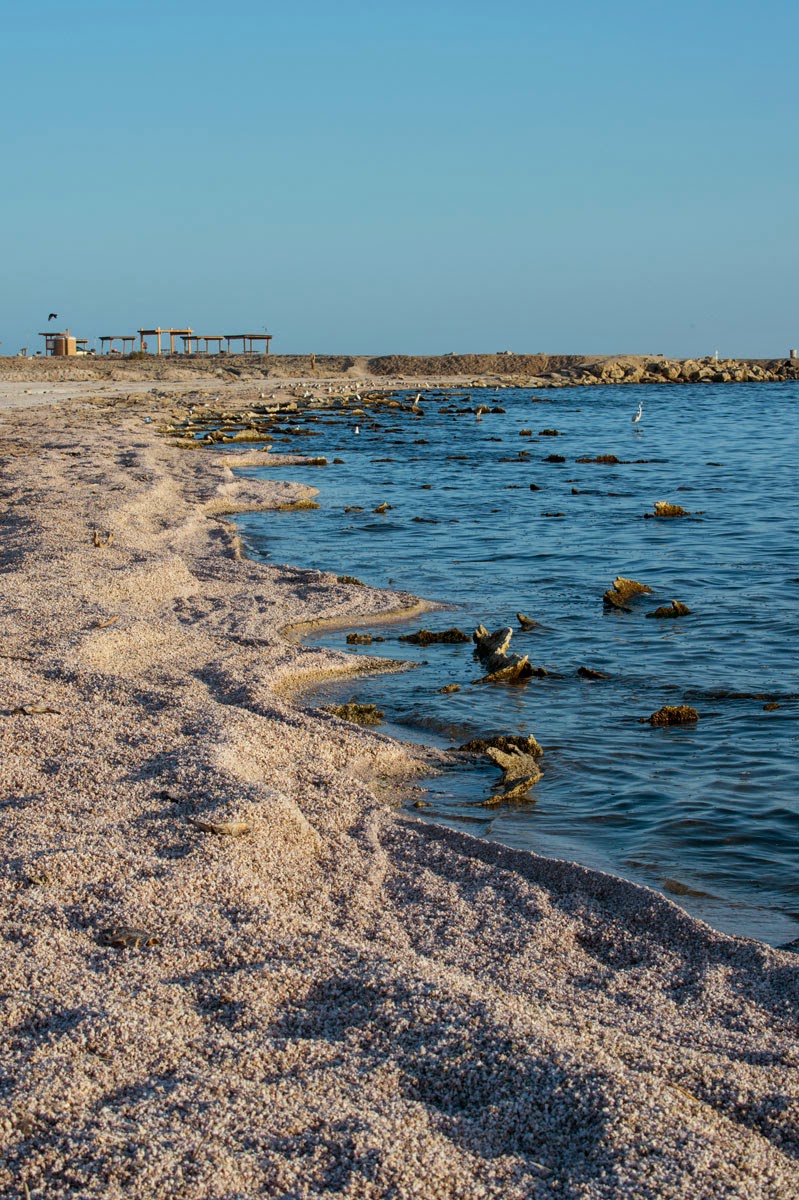 There are two different pelicans flying here ... this dark black one ... 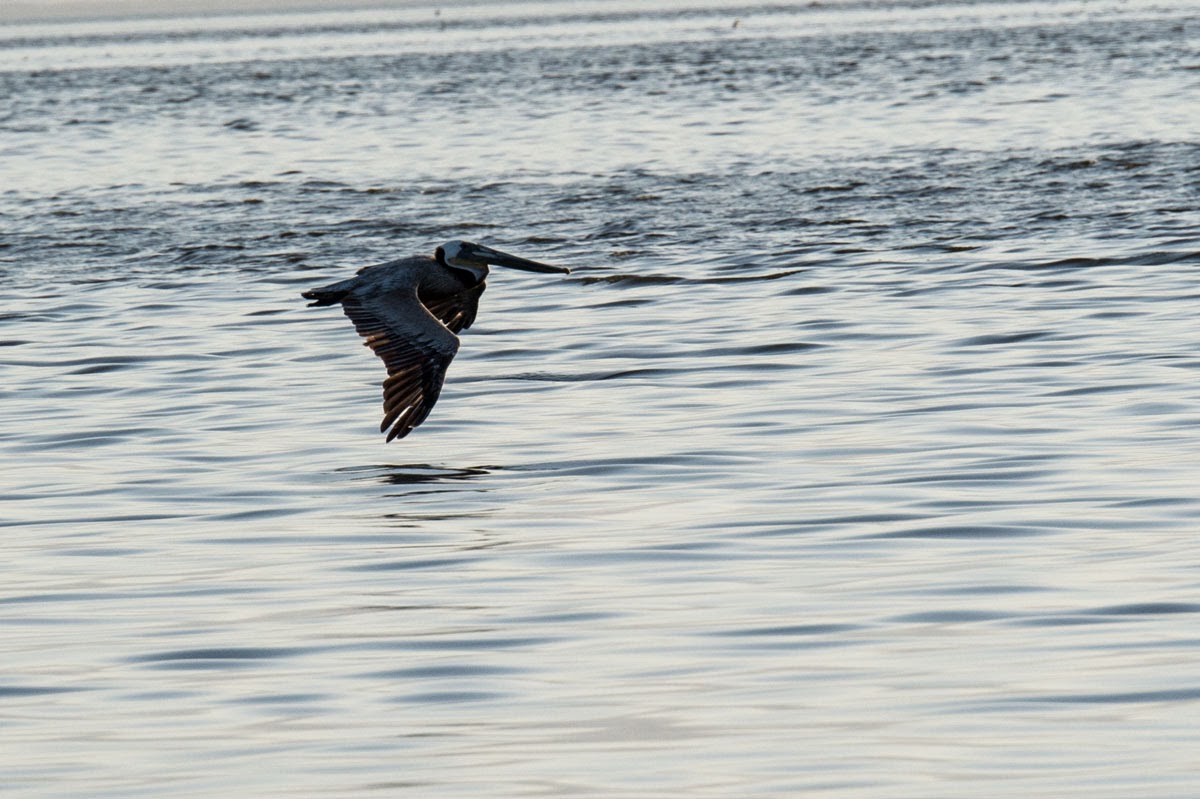 And this white one with an odd bump on his beak.  I'm sure the names of each are in that book I didn't have enough cash for. 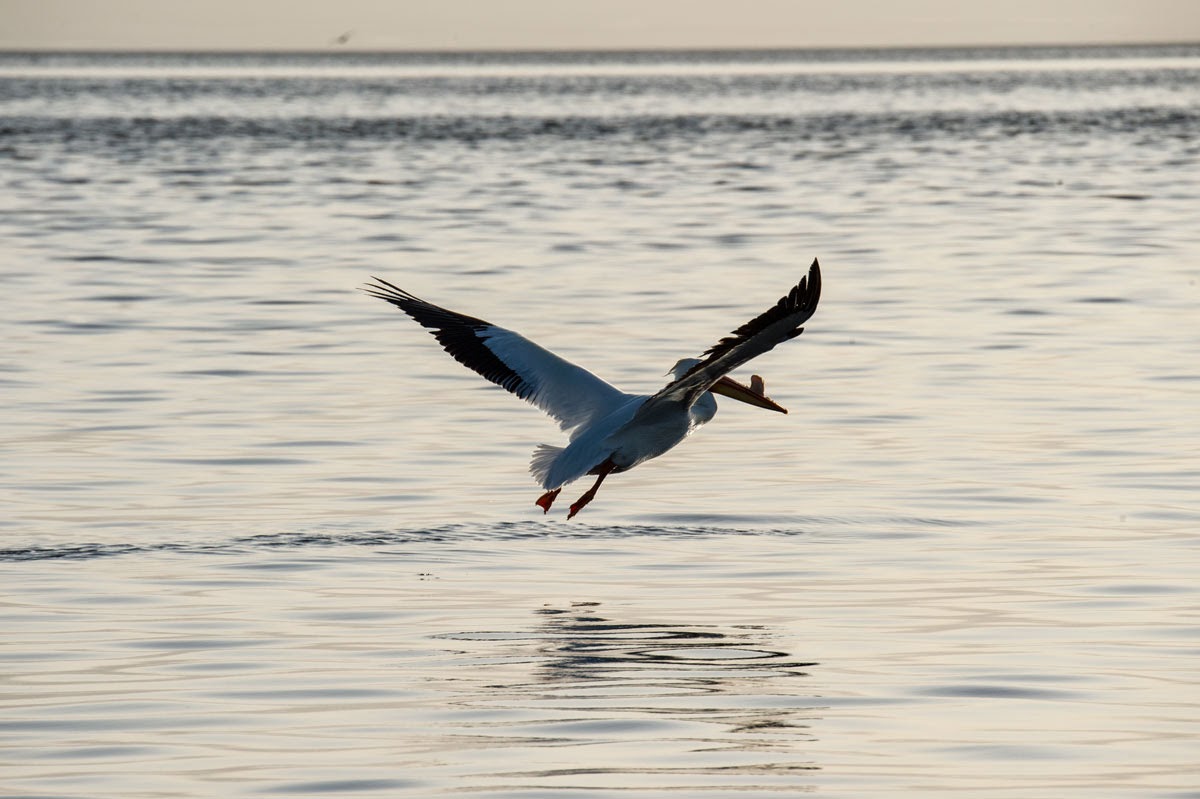 There are lots of palm trees in weird locations ... leftover from the yacht club/fishing boom of the 50's.  At one time, this parking lot was full of boats waiting to launch for a fishing expedition on the lake. 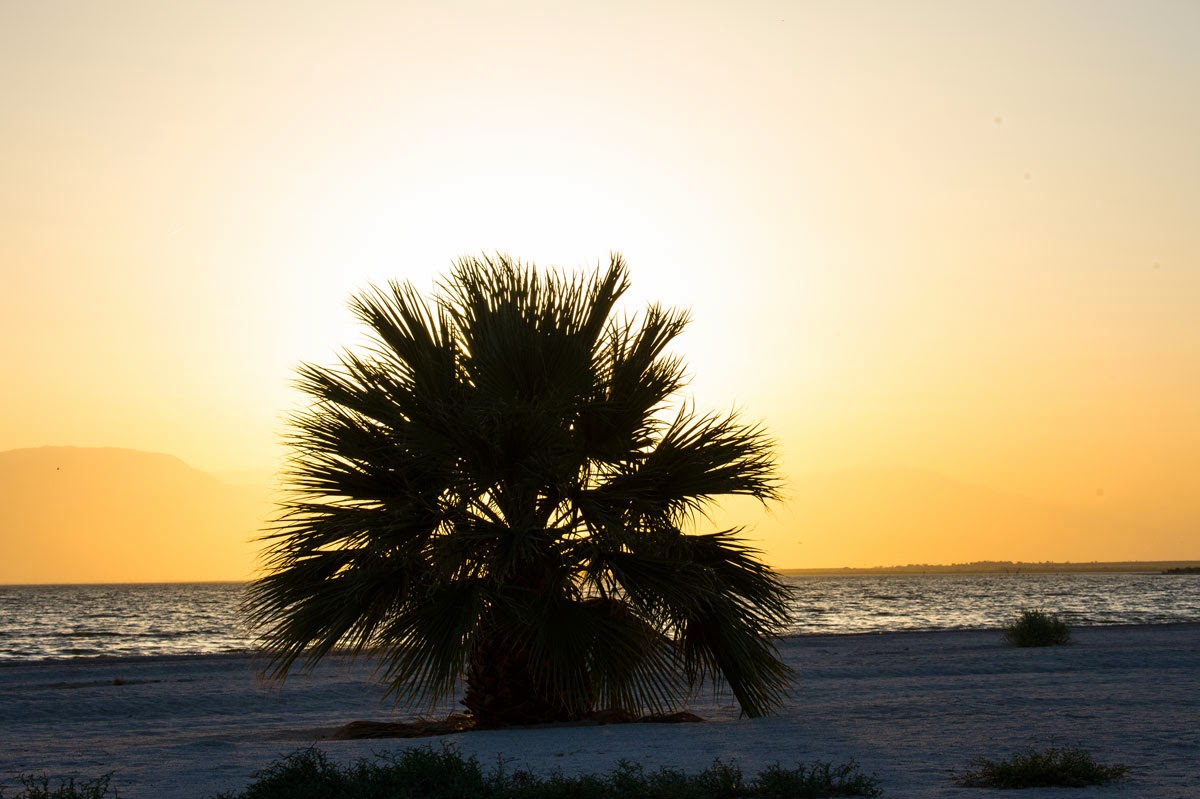 Since I have no idea what's on the schedule today, it will be a surprise for tomorrow's blog.  Don't worry, I'll be up again by 5:00 to the lovely sounds of the train's crossing whistle!!

Posted by Nancy Kissack at 7:27 AM