Finally a good nights sleep!!!  Apparently big trucks don't run Hwy 40 much on Sunday evenings.  I needed it too, since most of the drive from Holbrook to Albuquerque was in some gusty winds, causing my anxiety level to skyrocket for the first forty miles.  My rig is pretty light weight, so those gusts can move me over a bit, causing white knuckles, wide eyes and a rigid stance that would make a wonderfully attractive picture.  Good thing I don't have anyone lurking around with a camera! 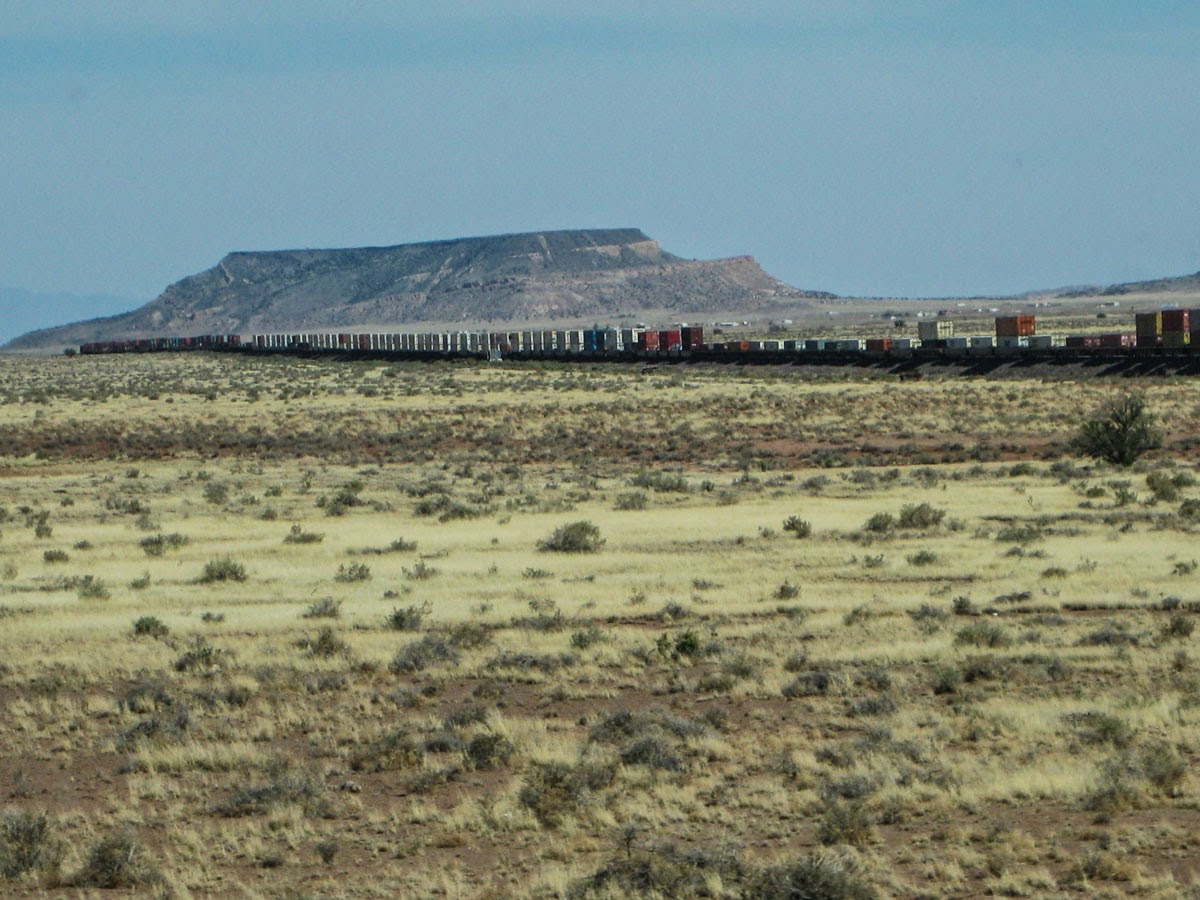 We passed a couple of really long trains ambling slowly across the landscape.  There's not much to see until you get closer to the New Mexico border.  I read Gallup was the place for Indian jewelry and pottery, so we took Old Route 66 through town.  Not much has changed here ... the businesses are thriving and parking is at a premium.  Tom did find a spot big enough for one rig, and as he pulled up beside the curb, two nice people told us they were leaving in the RV's parked just ahead.  What great timing!!!  Watch out for those signs on the poles however ... I was so intent on watching the curb and the rear view mirror, that my awning missed the top sign by only an inch!!!  Whew ... that was a close one!!

Richardson's Trading Post was our destination.  WOW!!!  I've never seen so much jewelry in my life.  They have a bar of sorts at the back ... Cash Pawn on one side and Trade Pawn on the other.  One Navajo grandma was there with her daughter for some cash and I SO wanted a picture, but was afraid I would offend her.  If they don't return to repay the borrowed money, the pawn is considered DEAD and can be sold.  They had case after case of dead pawn ... my favorite!!  I did see a trend here however ... seems to me they loaned just enough that the people wouldn't be able to repay it ... and charged the new customer (me for example) so much that I wouldn't buy it.  Hence they have a HUGE collection of Indian jewelry that they will probably keep.  Makes me sad ... but I'm sure I don't know the whole story. 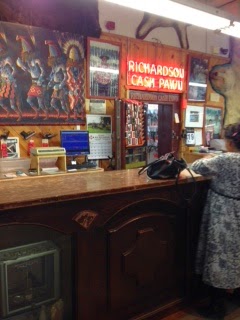 Over at the contemporary coral case, I tried on every single bracelet ... AFTER I got a lesson in how to put it on.  Guess I've been putting mine on backwards for ages!!  At any rate, this beauty matches my new earrings.  Yes, I paid too much for it ... but you only go around once, and my theory is that you should have pretty jewelry on your arm while you're at it!!  In the meantime, Tom tried to find a watch band that would fit his watch, but they were all too small.  :( 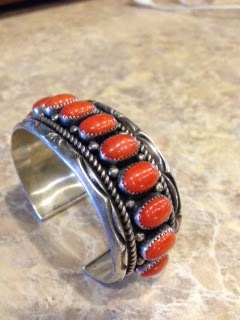 Now THIS is a pot I'd like to have in MY back yard.  Isn't it amazing??  We passed by heading for Jerry's Mexican American Cafe, as recommended by Larry at Richardsons. 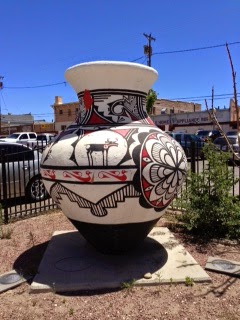 Around the corner from the tire shop, one block off Route 66 is this tiny, tiny cafe stuffed to the gills with locals.  We squeezed in and danced around the 6 square foot waiting area until we got a table.  The taquitos were handmade and yummy, as were the chili rellenos and enchiladas.  DO NOT order anything with GREEN sauce.  Unlike "our" green sauce, New Mexico green sauce will start your mouth on fire!!  It didn't take us long to figure out we were the only white people there.  At 2:30 the place was still packed with locals!!  You also get sopapillas and a bottle of honey.  GREAT food!! 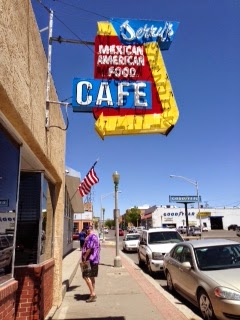 Many old signs decorate the highway on the way to Fort Courage, but we didn't stop.  This place was a little TOO touristy for us!! 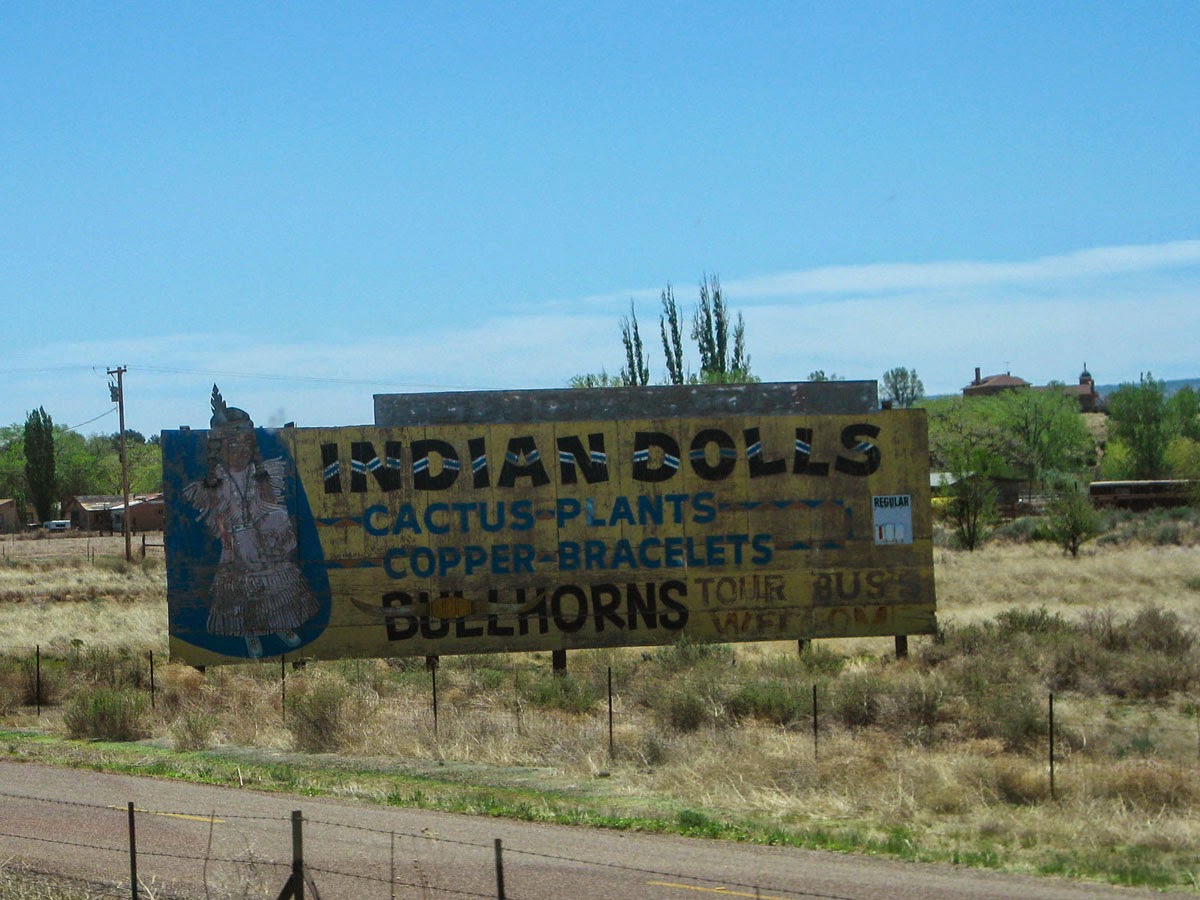 Pretty soon the mountains change to beautiful red pinnacles of rock as we climb further up towards Albuquerque. 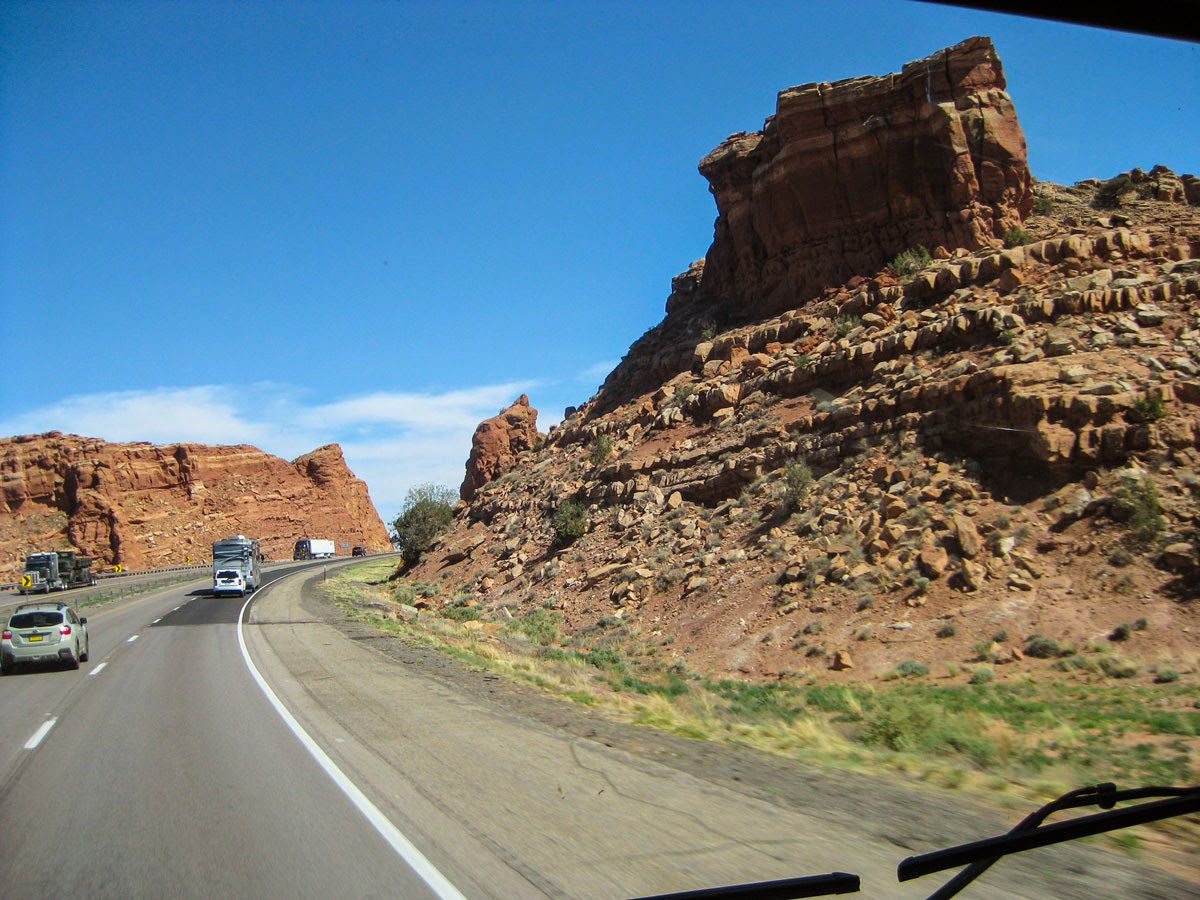 Hard to get a good picture while driving in gusty wind, but straight above the Westerfield's coach is the highway, climbing over the top of that mountain as we got to the big city of Albuquerque.   On the left as you come in, you will see a huge Camping World.  Next door is the Enchanted Trails RV Park.  It used to be known as the Hilltop Trading Post which sported huge arrows, a large stuffed bear, live snakes, free coffee and a burro that wandered the parking lot.  It was a nice rest stop after the trip up Nine Mile Hill (seen below) for tired travelers.  Today it is a Passport America Park for $16 a night, full hookup.  All gravel and kind of tight, the power and water are good and you can walk to Camping World.  What more could you ask for??  There are several RV parks on the other side of the freeway, but all appear to be more expensive. 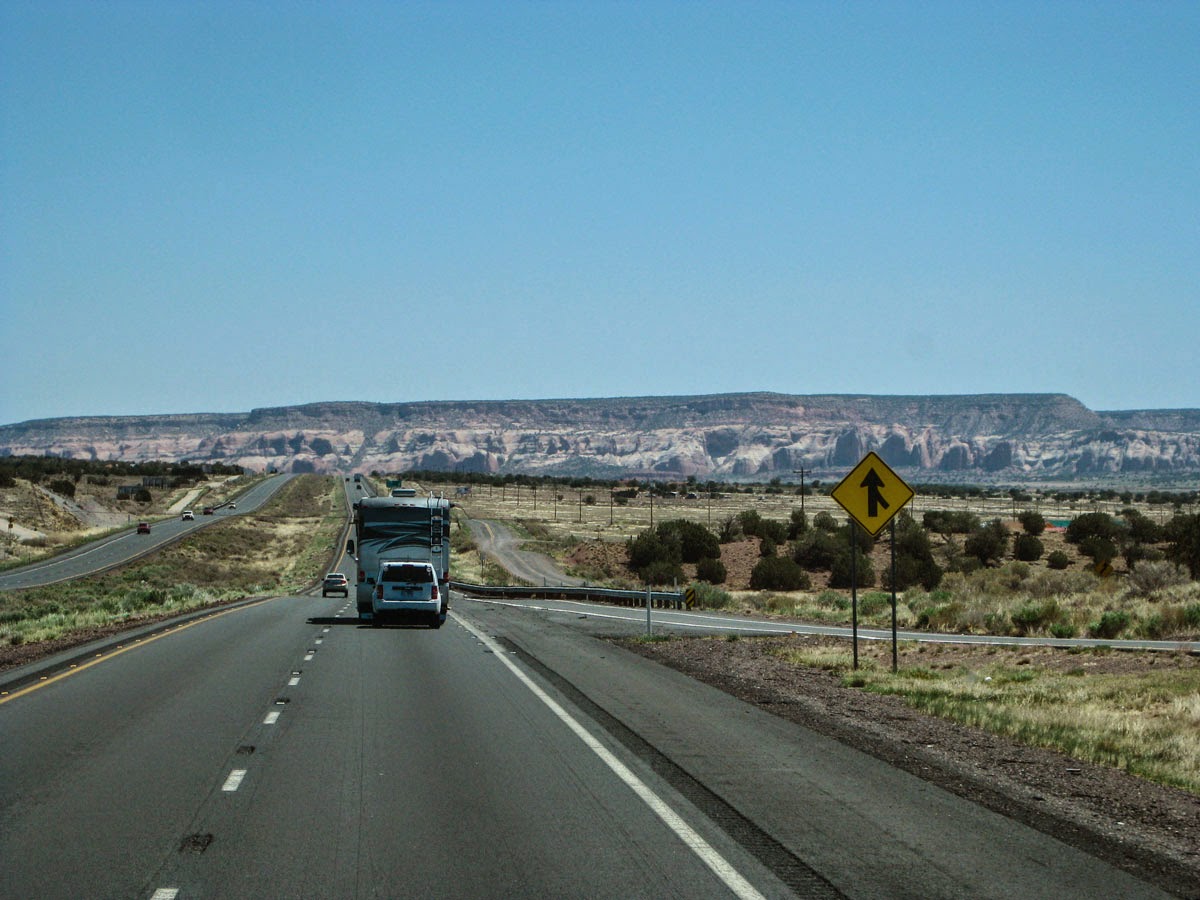 One VERY interesting thing ... upon arrival, the ground was covered with grasshoppers or locust.  There was a constant cloud at your feet as you walked.  The locals say they haven't experienced this before ... and they are worse here than further on into town.  The birds seem to be very happy about  the delivery service however, and we doubt they will bother us.  This morning early, it was very chilly and I didn't see a single one.

Today we'll sightsee around Albuquerque a little, spending two nights here.  In October we'll be back for the Balloon Festival.
Posted by Nancy Kissack at 6:16 AM