There once was a company here in Tucumcari by the name of Quarles Art Gallery.  They were painters with lots of time on their hands, not to say there's nothing to do in Tucumcari!!!  They practiced their craft on the walls around town, leaving beautiful murals in their wake when they left town.  The Chamber of Commerce has a map showing where they are located, so we spent yesterday driving around checking out as many as we could, as some were inside closed businesses.  I'd like this one running down the side of MY house!!! 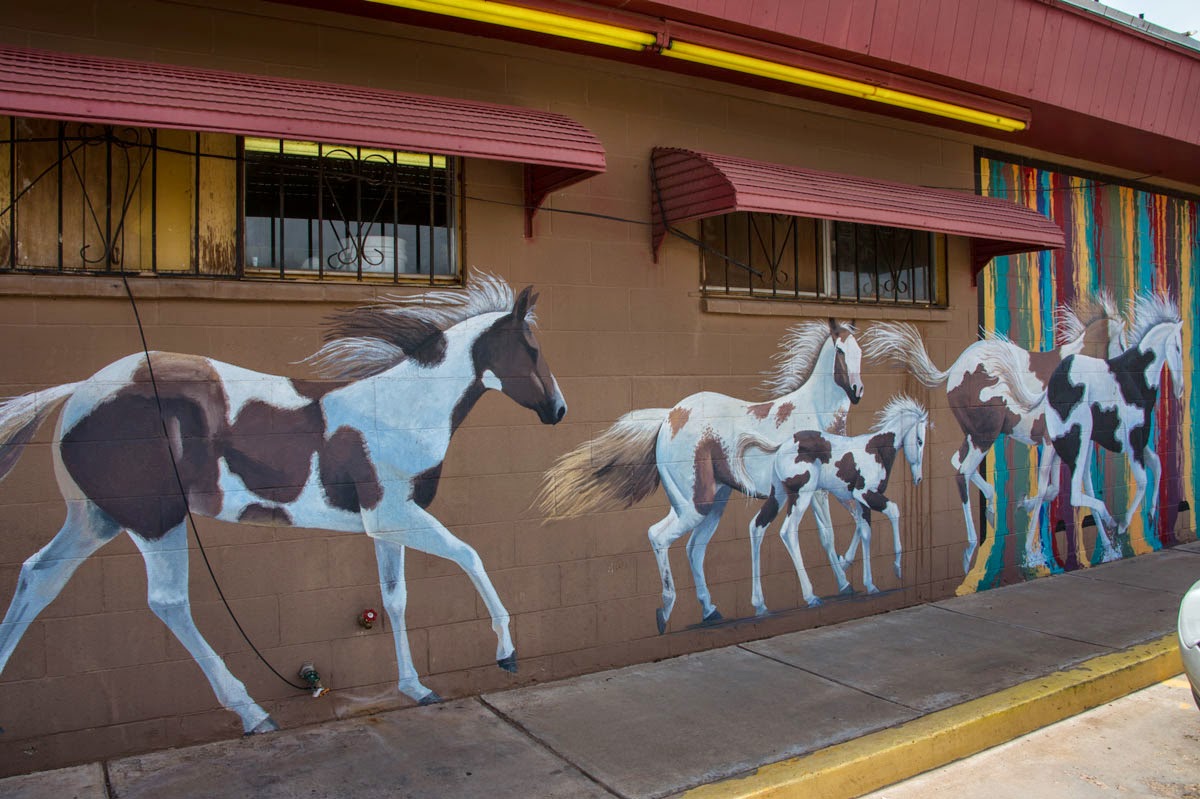 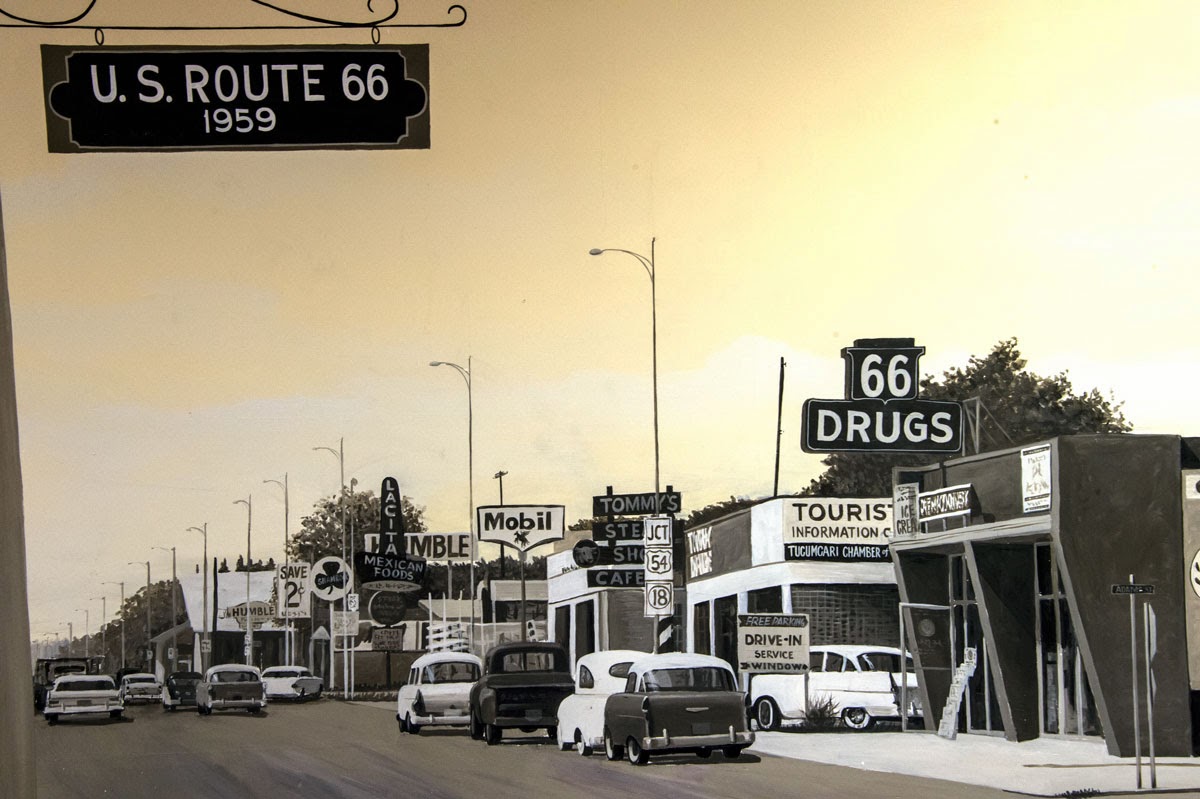 Fort Bascom was located just outside town (now private property), but if you drive there, you won't see a thing.  It has completely disappeared.  It was built as headquarters for the Calvary while they fought the Comancheros running in this country, selling guns and whiskey to the Indians.  Brought to life again here, you feel like you could just step into the past. 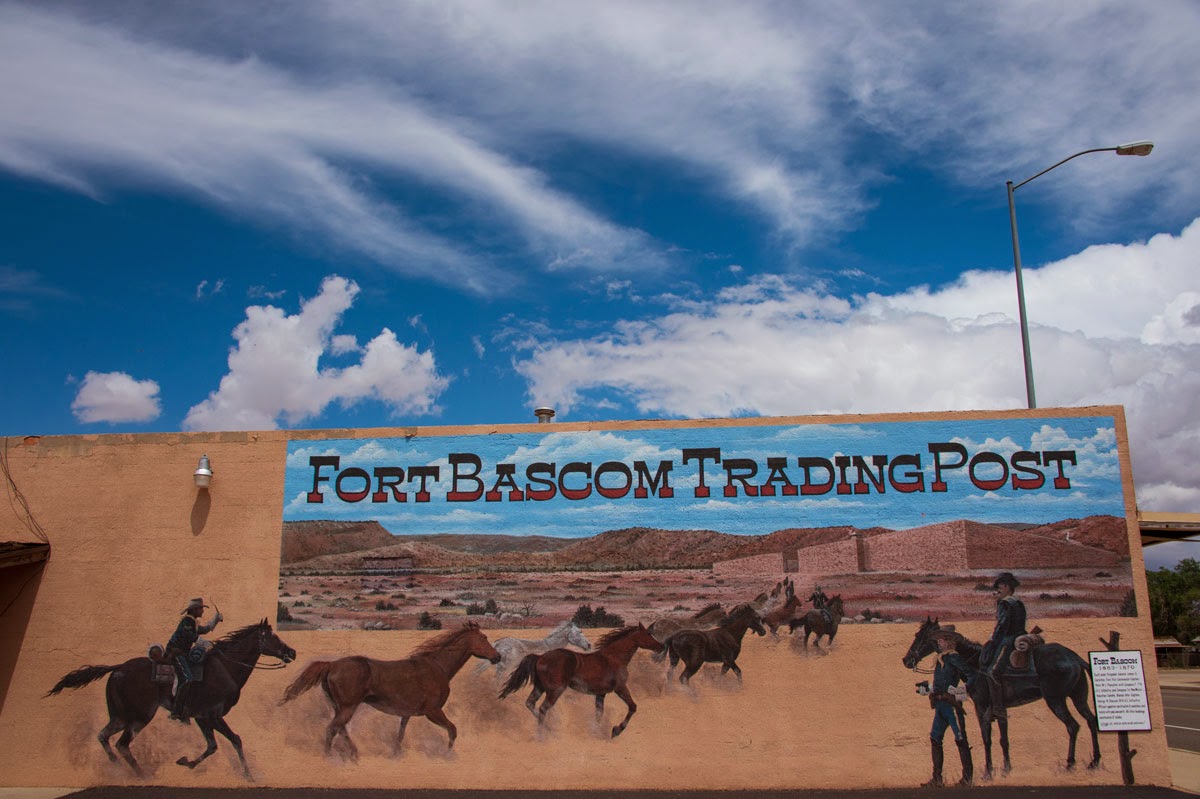 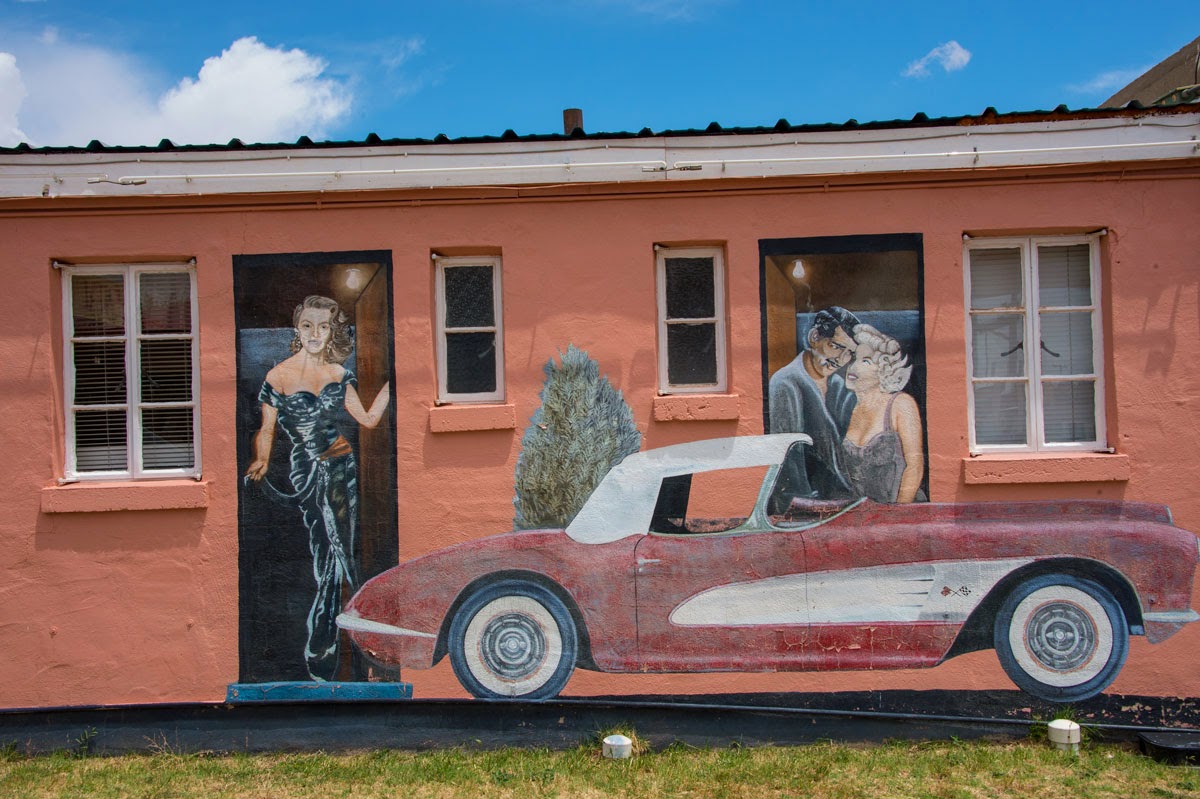 This train behind the credit union, just goes on forever ... the entire length of the parking lot!! 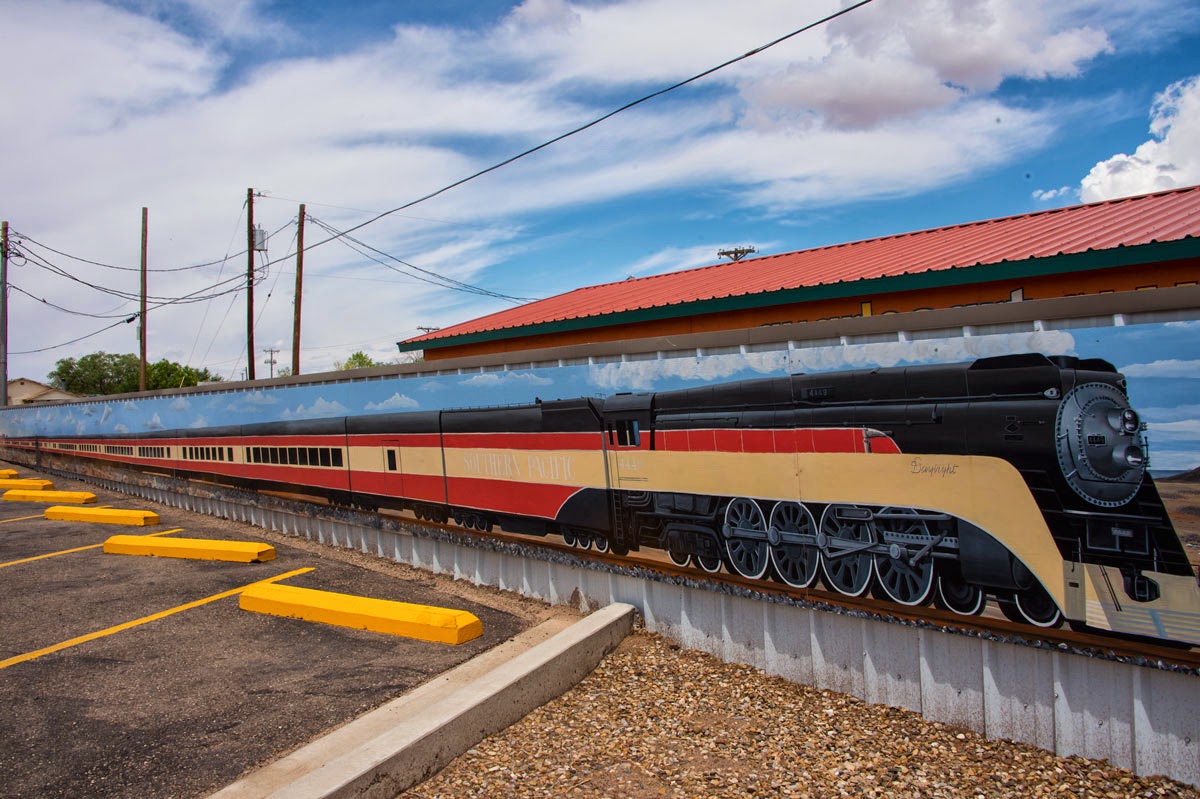 THIS piece, you could stand in front of forever, picking out all the subtle scenes that truly represent Tucumcari ... from rattlesnakes to dinosaurs to tarantulas.  That guy standing in front of the mural??  He's part of it ... but looks like he's just walking by.  GREAT use of shadow and perspective to produce a life-life image!!

You can probably tell this is the VFW Post.  It's NOT a mural ... it's the real thing!!  The two front windows however, are painted murals!!  This is the main street of old downtown Tucumcari, close to the newly rebuilt train station ... except trains don't stop here.  Hopefully some day Amtrak will again bring tourists to Route 66 and breath a little life into the town. 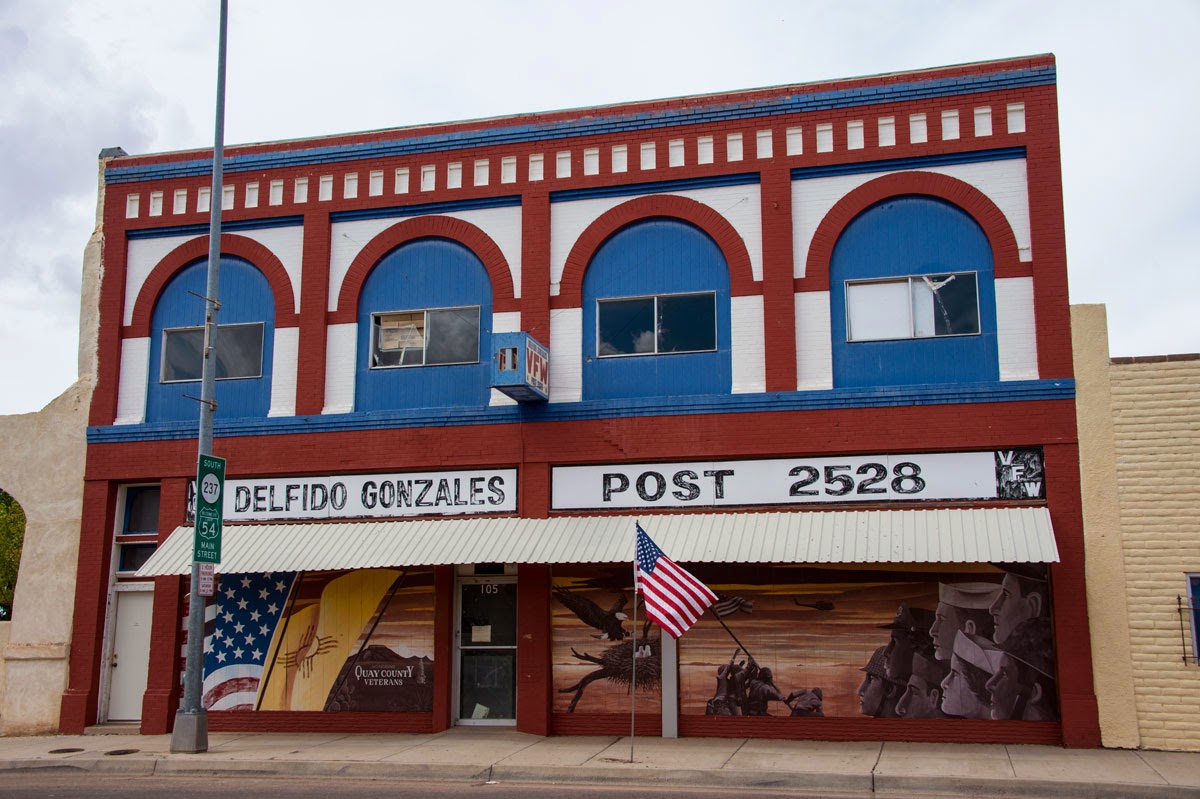 Not sure who painted this one, but it depicts Cari ... the chief's daughter.  Legend has it the towns name came from Toucom (the one she loved who was killed .. then she killed the killer) and her name, Cari (at which time she killed herself, causing her father the Chief to kill himself!!)  What a story!! A few of the murals are not painted by the Quarles ... and you can definitely tell which ones they are. This one of James Dean is nice though!! 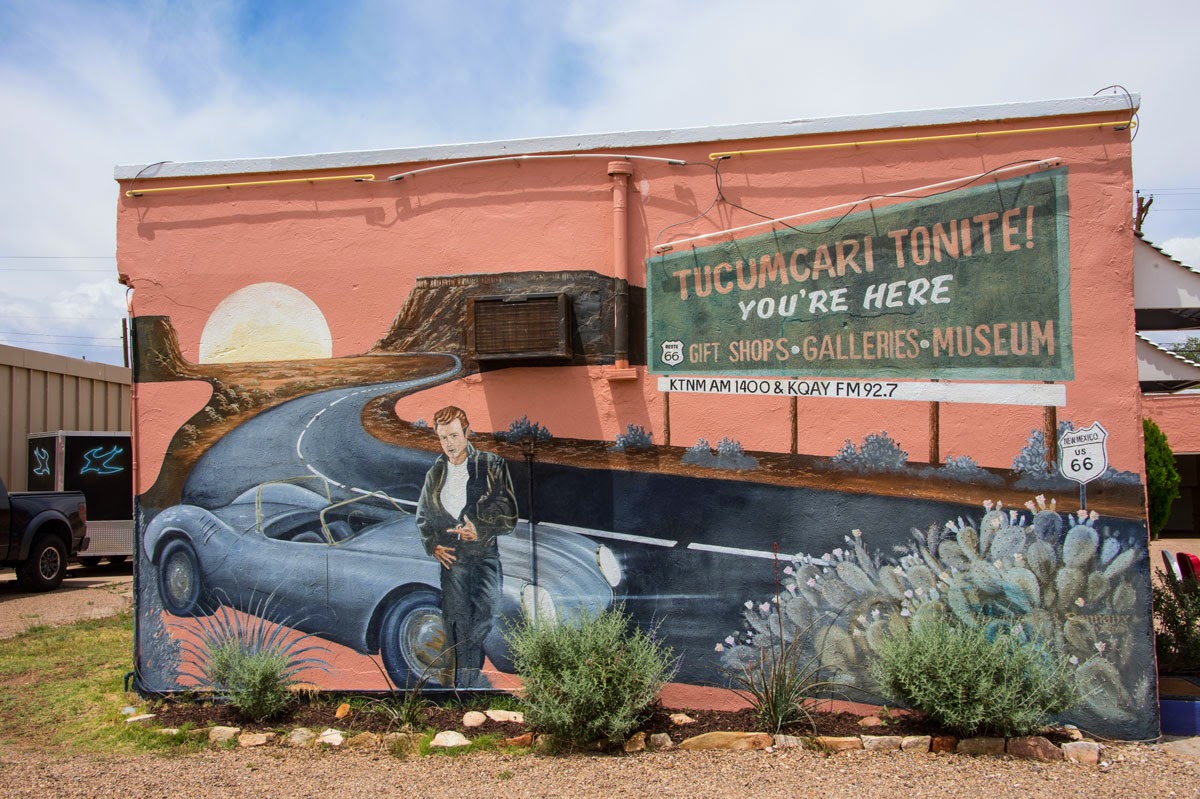 Here's Ranch Life.  It blends so well into the sky that you're not sure it's a painting.  Pretty amazing artwork!! 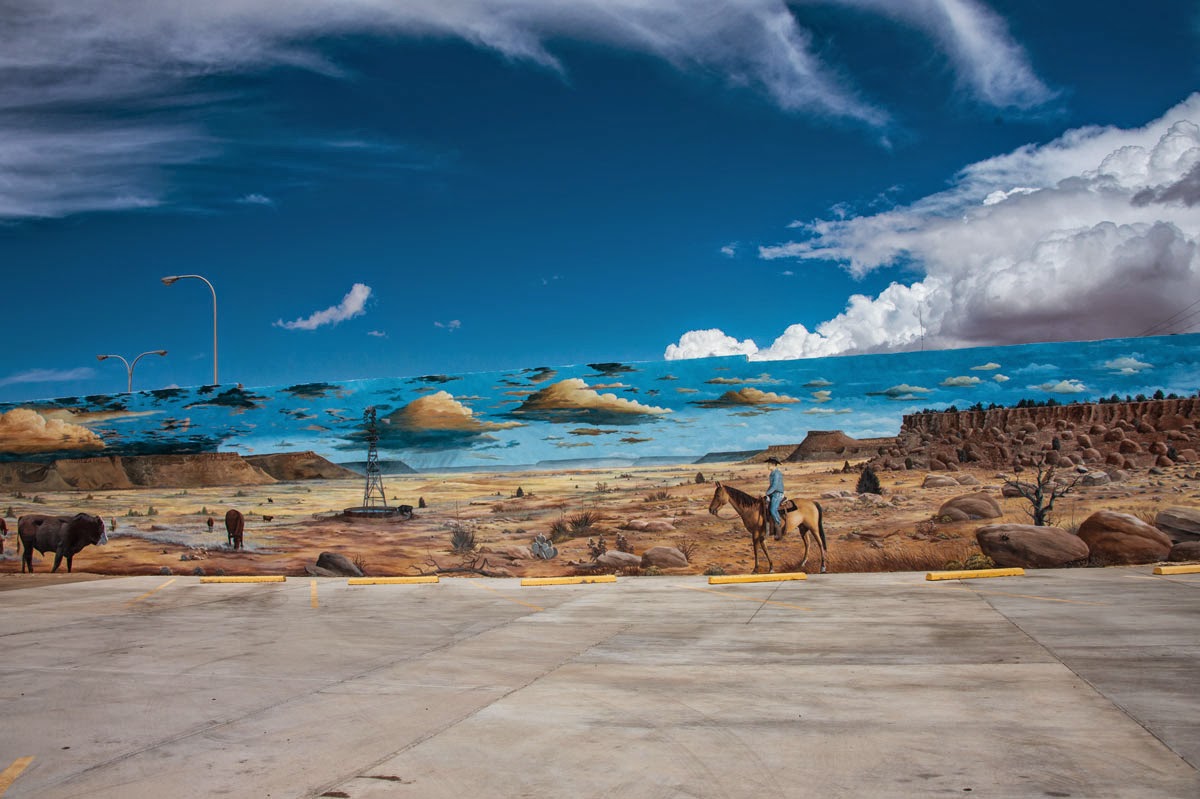 In the middle of the murals, we did a little caching, all the while looking out for these guys!!  The school mascot ... the Rattlers ... is a good once since there are so many around here!! 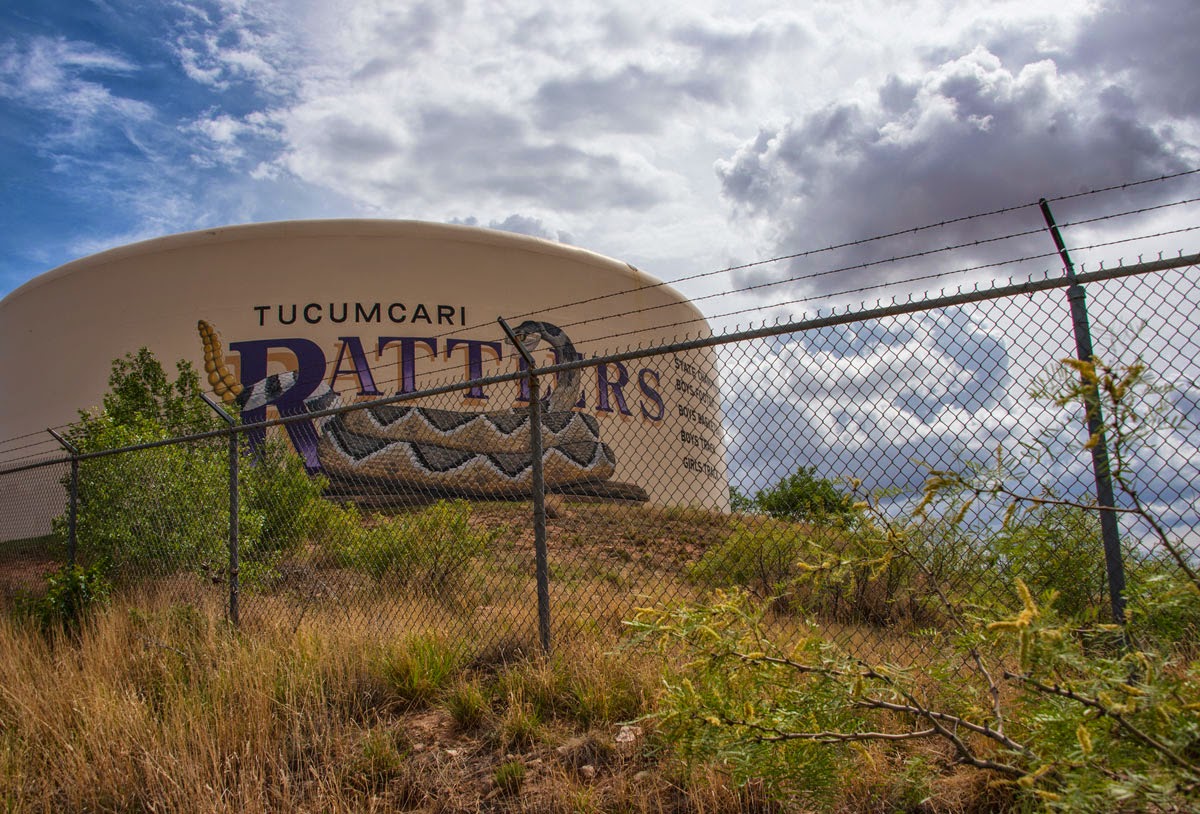 As we cruised around old town, we went by the Lumber Company, which happened to be open.  Barbara and I stood here for 30 minutes, picking out every scene on the building, from the guy with the wrench opening a pipeline to the saw cutting out the picture that the guy on the ground was holding.  On the end, it even had an image of the original owners!! 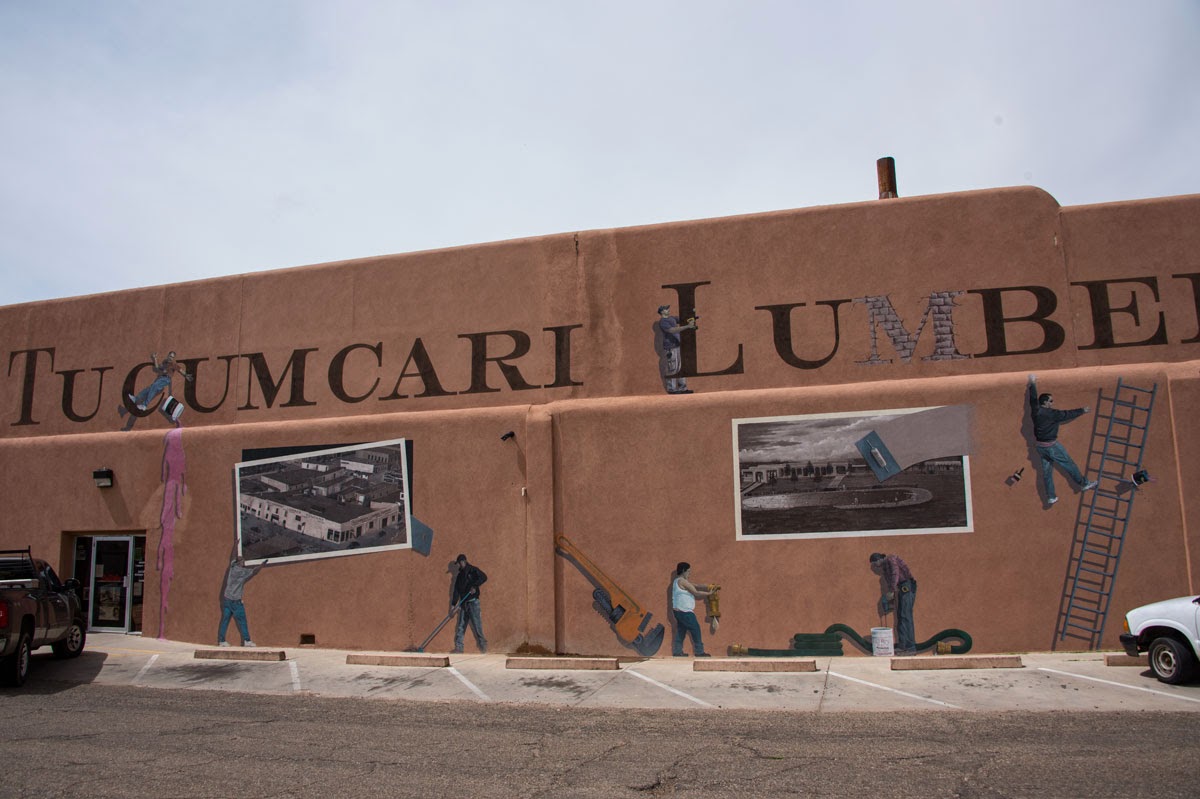 THIS picture however, is the one we have been looking for since we got here ... and where should we find it??  On the side of the Lumber Company building!!  THIS is the swimming pool at 5-Mile Park. The same one you on my blog saw a few days ago in total disrepair.  It must have been an incredible site in it's day!!  Don't ask me what the blue/grey thing is ... I have no clue!! 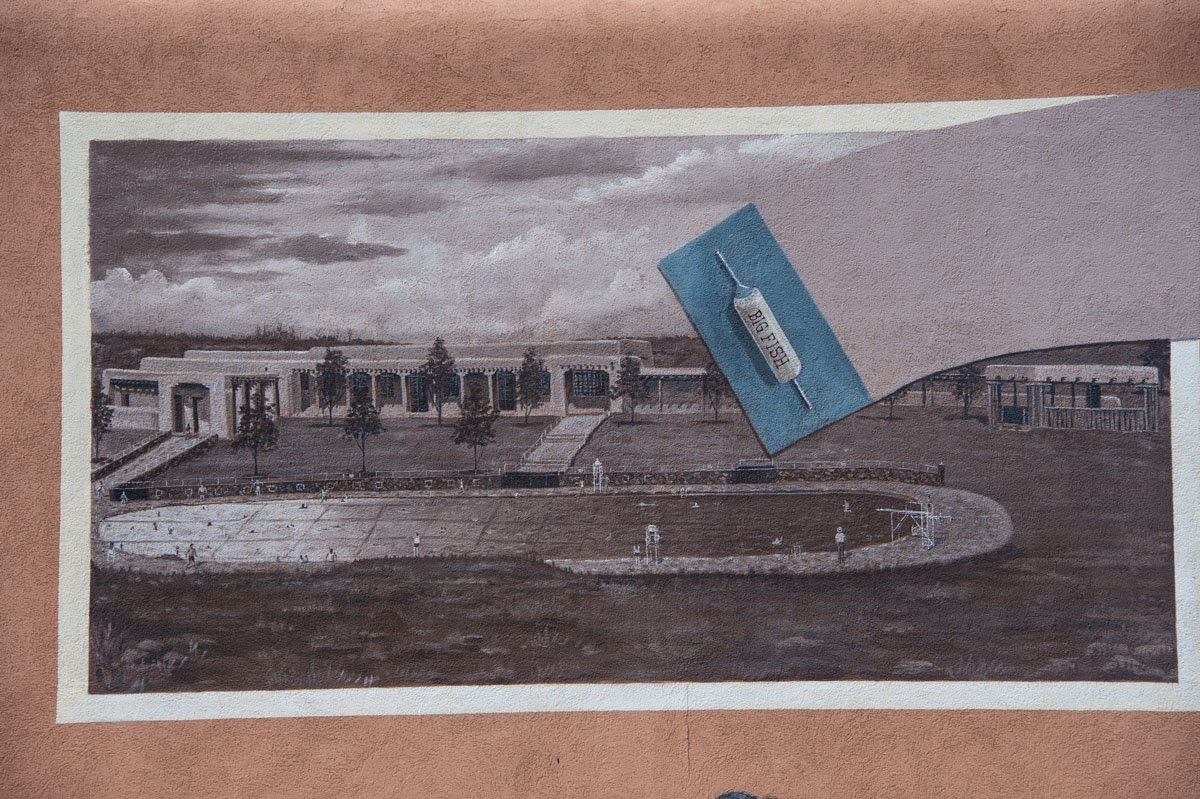 Barbara's phone squawked out another severe thunderstorm warning, so we decided to hot-foot it back to the rigs after a quick stop at the Teepee Curios shop and Micky D's for a grilled sweet chili wrap and a sundae for dinner!!  YUM YUM!!! 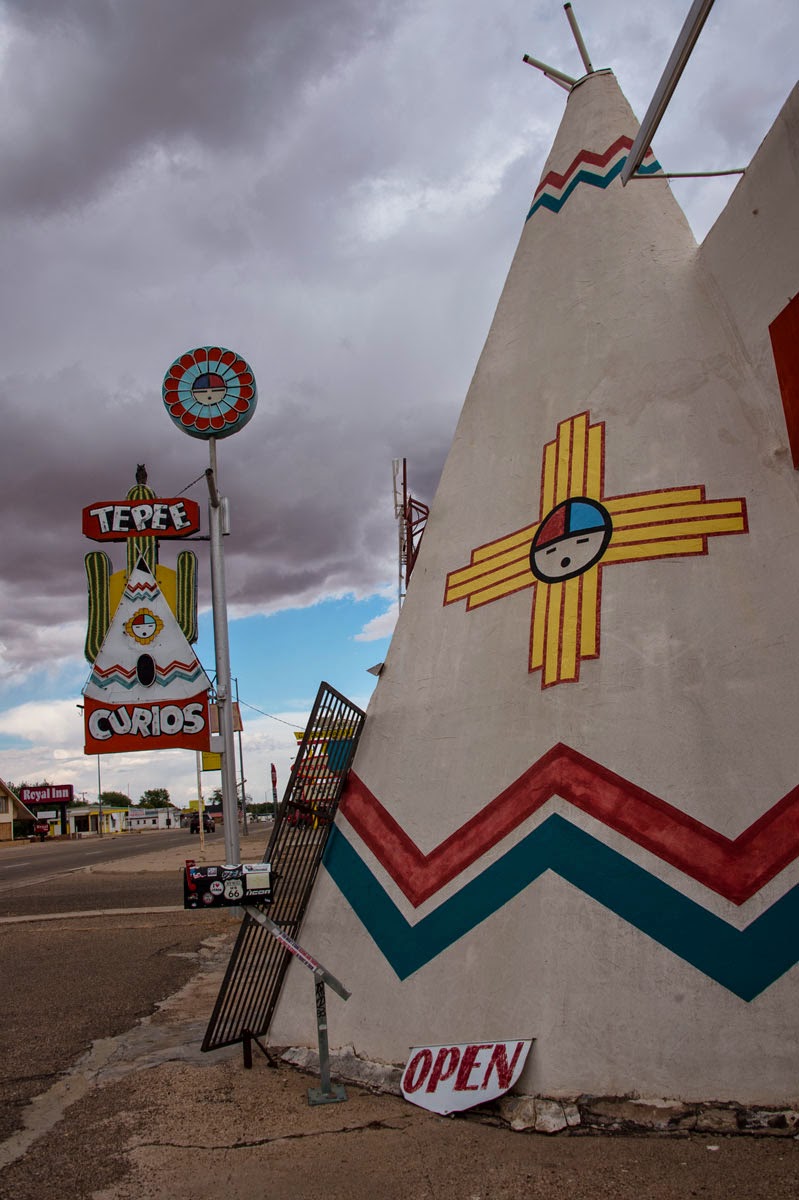 On another note altogether, I would like to say that the best thing I ever bought for my rig was the surge protector, installed at FMCA Indio two years ago.  Of course my paperwork is at home, but I'm pretty sure I got it from Darryl Lawrence, and it's made by Progressive Industries.  In the middle of the night last week, I heard it kick off and on twice.  This morning, it did it again.  As I checked my meter, the electric service was spiking the needle!!  Yikes!!!  Thanks to the surge protector however, I didn't loose my TV or microwave or computer .. all of which were on this morning!  Best money I ever spent!!!