Mostly around here you have to trade cash for trinkets.  I tried beads and arrow heads, but it didn't work worth a darn!!  The story of these boots is below where you will see yet another picture of them!  I couldn't help it ... I wanted them to be the first picture on the blog! 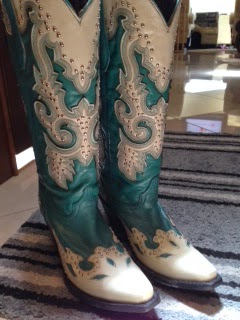 I have been admiring Miss Barbara's small purses, holding just enough and leaving her "hands-free". When we saw these in the train depot shop, I couldn't resist.  Although I still carry my backpack, I'm not spending precious shopping minutes digging for my wallet in the bottom of the bag!! 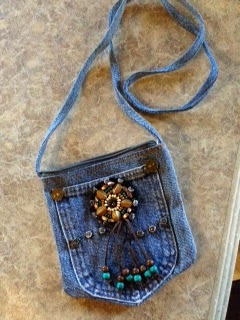 On Wednesday we went to the Hippie store to check out a tie dye shirt for Tom. Not exactly my kind of store, so I wandered around checking out the jewelry.  Big mistake ... my wallet was whispering to me, but when I set my eyes on this scarab necklace straight from the Mummy movie, I couldn't resist!!   (Not really from the movie but it could have been!).  My wallet cried!! 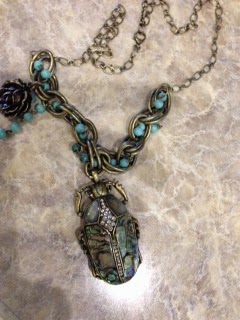 Thursday was a day off to relax before moving on, at least up until I found a western store in Cottonwood--the Cowboy store.  My first thought was that I might find a nice cowboy that would be the perfect fit!!  No such luck, but I did find these amazing boots that fit perfectly.  By now my wallet is wailing on deaf ears.  I HAVE to have these boots.  It was a no brainer when they said it was poker day.  Pull a chip from the boot for 10 or 20 percent off.  I got a 10% chip :((   Then I had an idea.  Would they throw in a bootjack for free (value $20) because I only got 10%?   The answer surprised me!  I could draw a poker chip again (hoping for 20%) or pick the free bootjack.  A quick check of the math in my head told me to DRAW AGAIN.   Eeeehaw!!!  A 20% off poker chip!!!  Here's my prize!!!!!  They are the most spectacular pair I've ever had!!!

Since my wallet just collapsed in despair, I charged my dinner with Tom and Barbara when we met at the Hog BBQ!!!  Really awesome ribs!!!!!  The sides weren't shabby either ... great potato salad and cole slaw!!  In just a few minutes I'll be having the leftovers for breakfast!!! 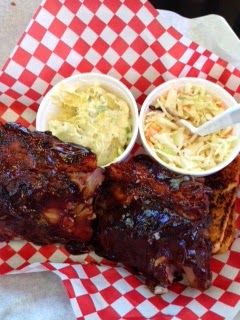 This morning it's time to head em up and ride off into the sunset -- or rather the sunrise, as we head East to Winslow Arizona.
Posted by Nancy Kissack at 6:27 AM