I know what you're thinking.  What in the world is there to see in Tucumcari???  It's practically a ghost town with every other house falling down into a pile of rubble ... and you're right, to some extent.  There are however, many hardy individuals who do their best to keep it going and eek out a living among the rattlesnakes, scorpions and cactus.  Two of those individuals are husband and wife Jimmy and Stella Watson, owners of Tucumcari Ranch Supply.  If you ever pass through town, stop in, introduce yourself and say hello.  You won't meet two nicer people!!  The best part is their store has everything you could ever want ... from hay and grain to antiques to clothes to the best BBQ in town!!  Have a donut and get your picture taken with the big bear!!! 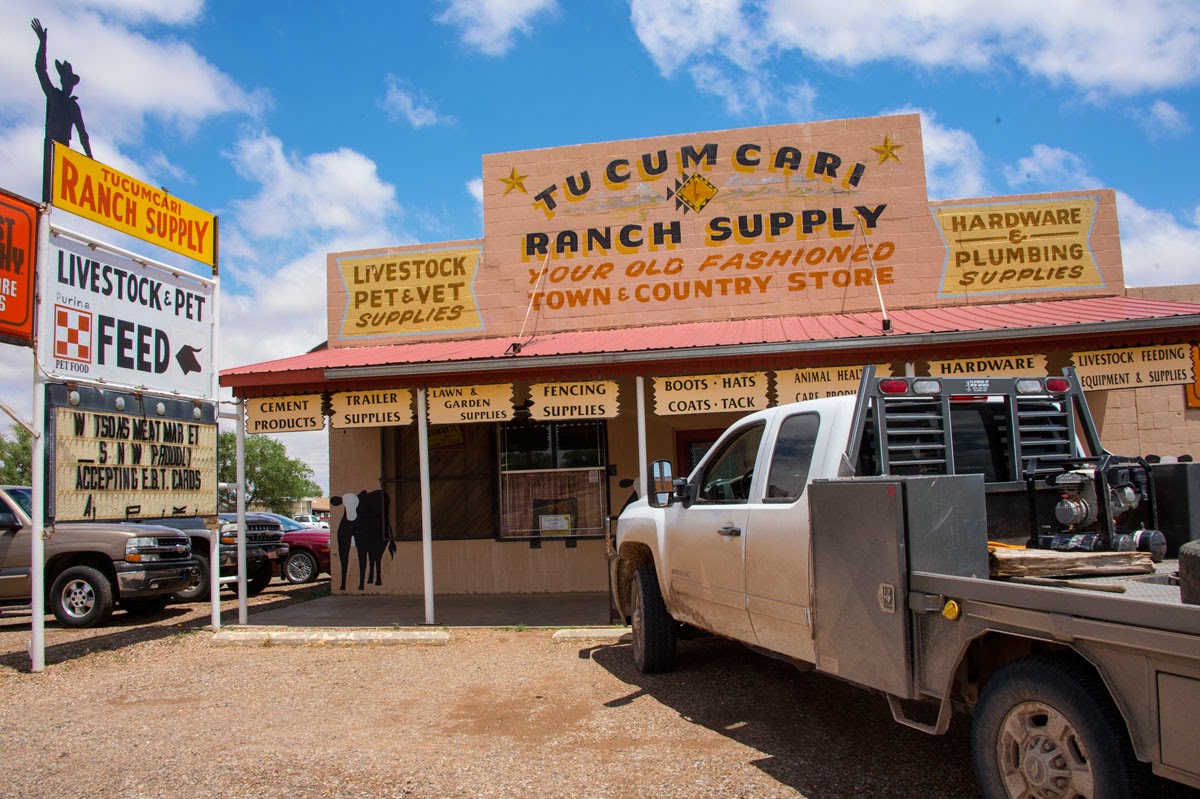 Out back, among other collectibles is this great Kickapoo Elixir Medicine Show wagon, used in a B Western movie that fell flat.  Who cares ... it's a spectacular piece I've seen nowhere else!!! 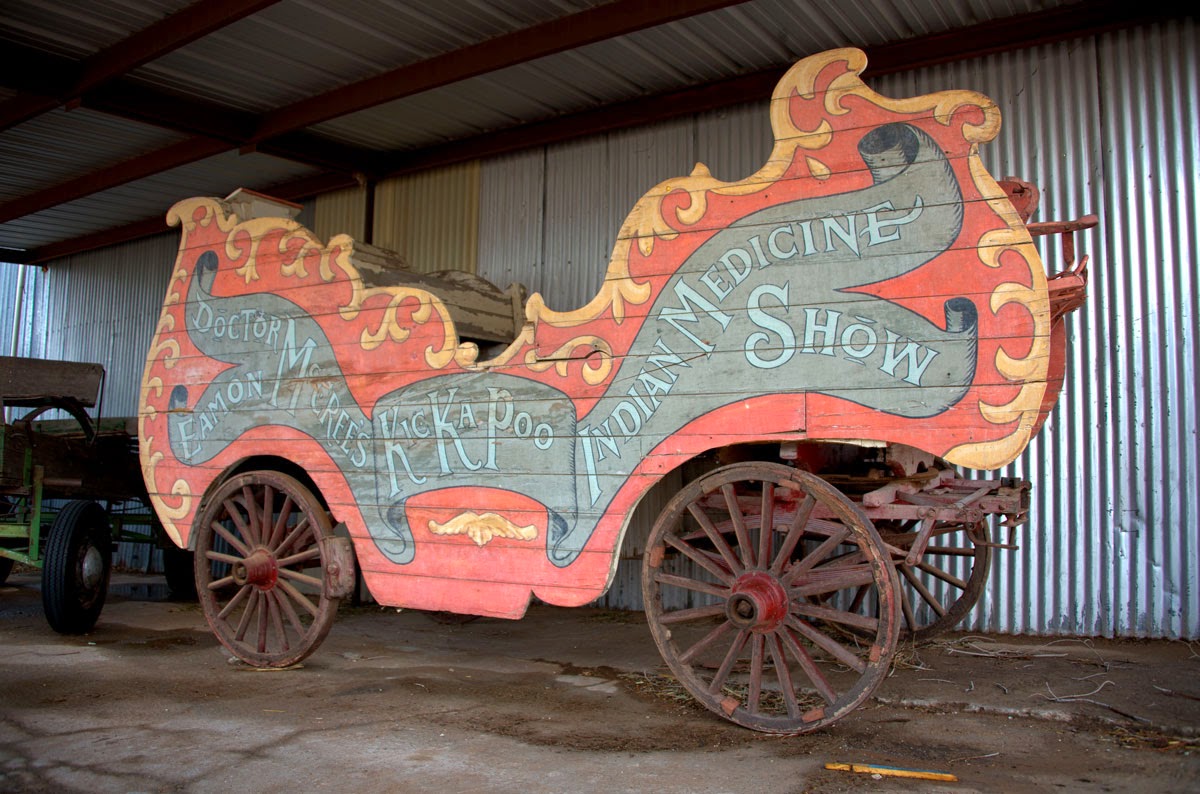 Across the driveway is Watsons BBQ along with more antiques and lots of fun things to check out.  The BBQ is delicious.  Come sit a spell and chat with the locals.  I think I've never been in a town with more friendly people.  Just look for the buzzards on the windmill!! 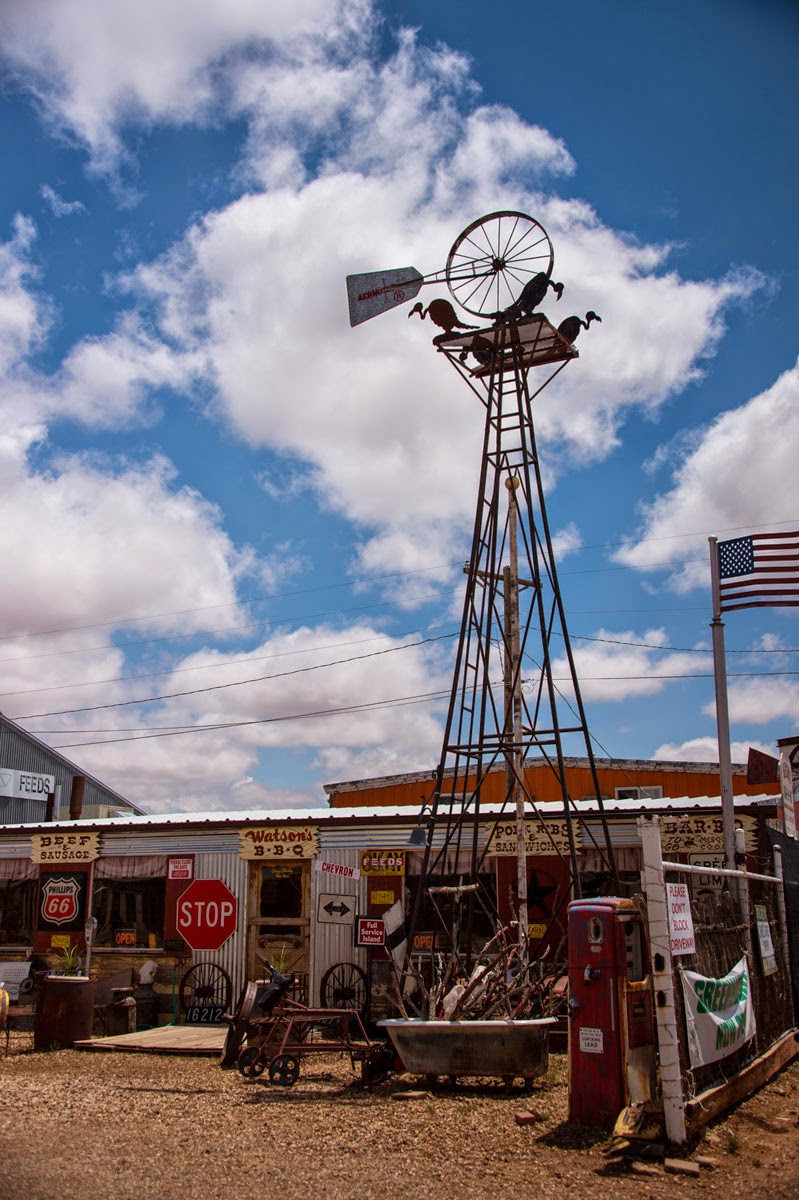 All along the way we picked up caches with more interesting history lessons.  There's not much information on this one, but it's a doozy!! Many years ago the city folks dug this huge swimming pool for their kids to swim in.  We called it a plunge in my day.  It's about the size of two olympic pools, the biggest people had ever seen!!  Locals came from miles around to spend the day here, lounging in the pool, shooting at the gun range or the archery course, picnicking and just relaxing. 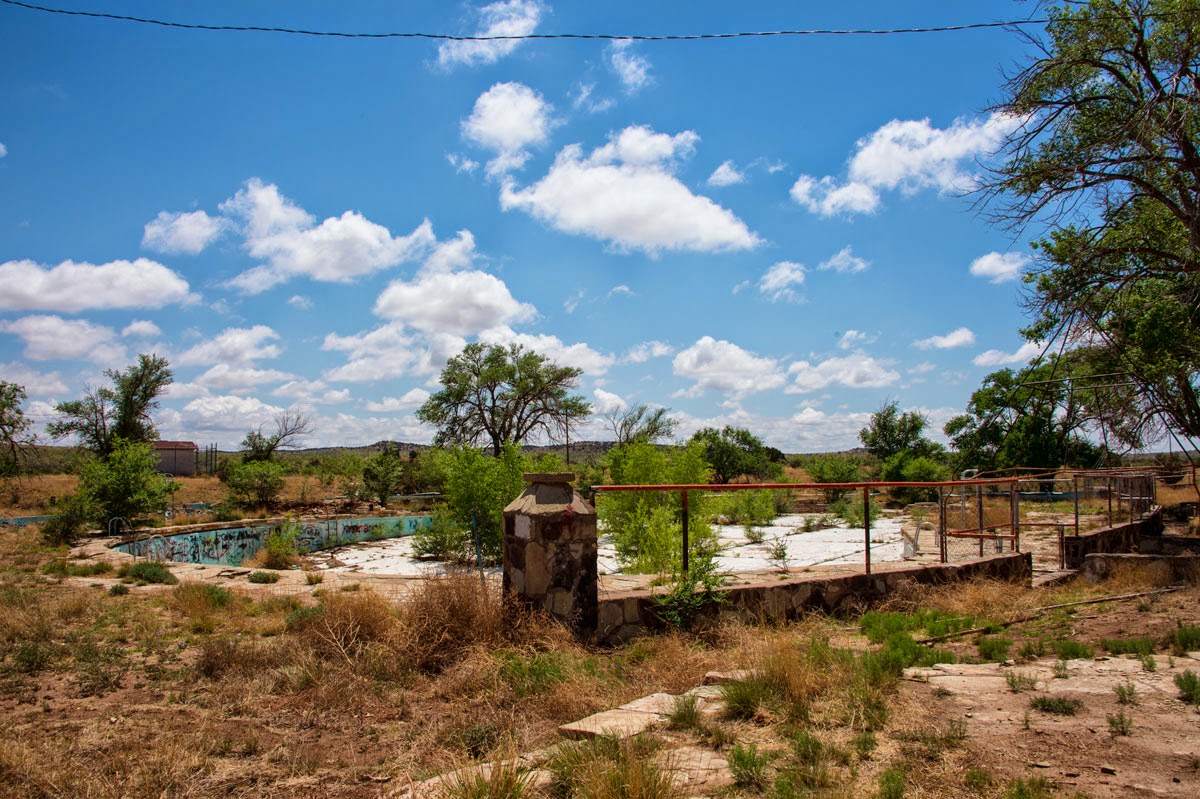 This is the shallow end of the pool.  Most of the slate slab decking is still intact, but the block wall fence fell over years ago. 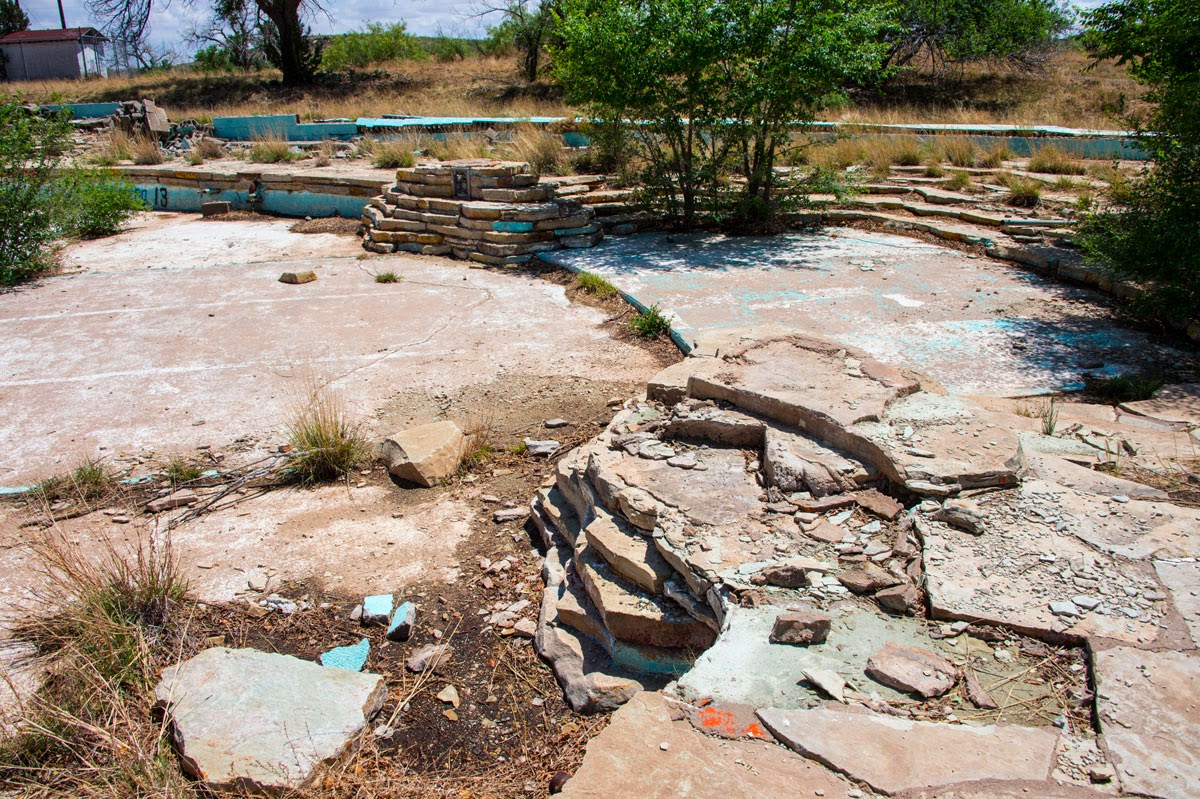 Along this row of trees were bathhouses and changing rooms made of adobe bricks, wrapped in chicken wire and plastered.  I haven't been able to find out why it declined to this state.  Maybe there wasn't enough water ... maybe it was too expensive to operate ... but eventually the adobe began to disintegrate, leaving huge wooden beams that caught fire.  It was the death knell for what was once paradise!  Unfortunately, this one won't be coming alive any time soon!! 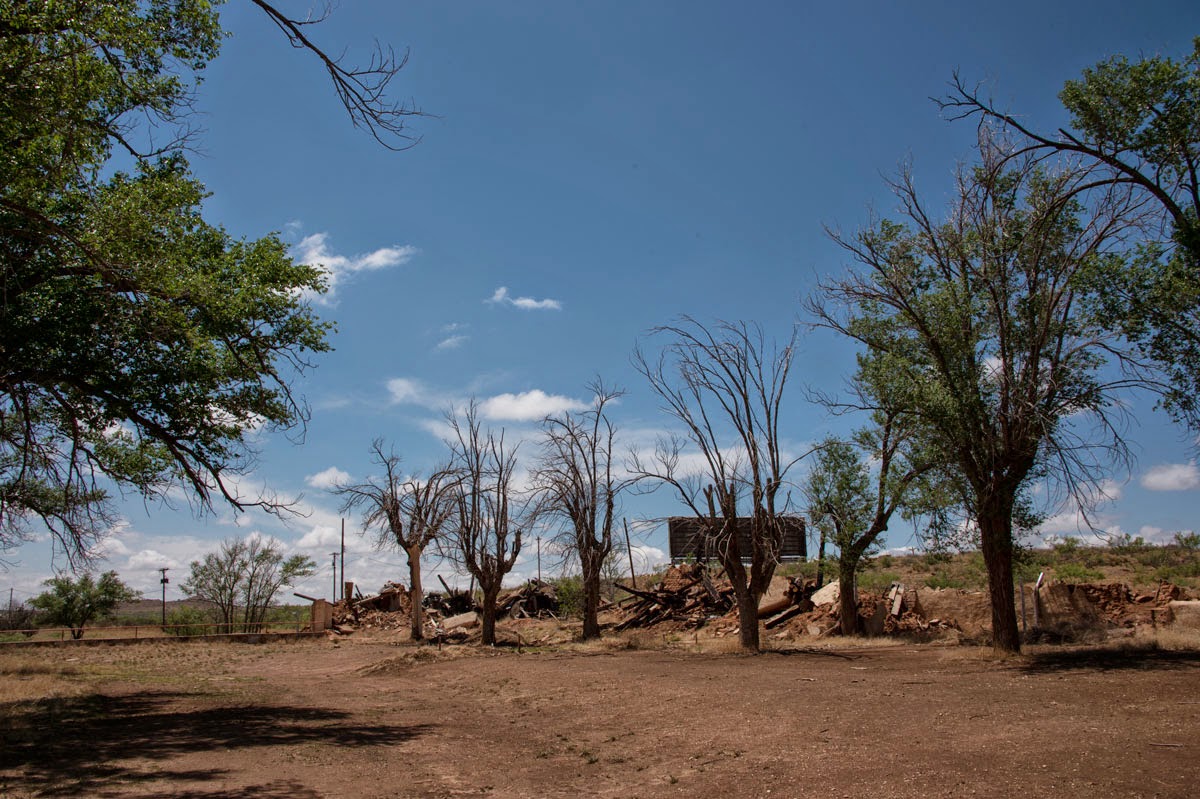 With a couple more caches under my belt, we stopped at this antique store/motel to take a few pictures and find "just ONE more" treasure cache.  There is so much cool stuff here I could have stayed all day. 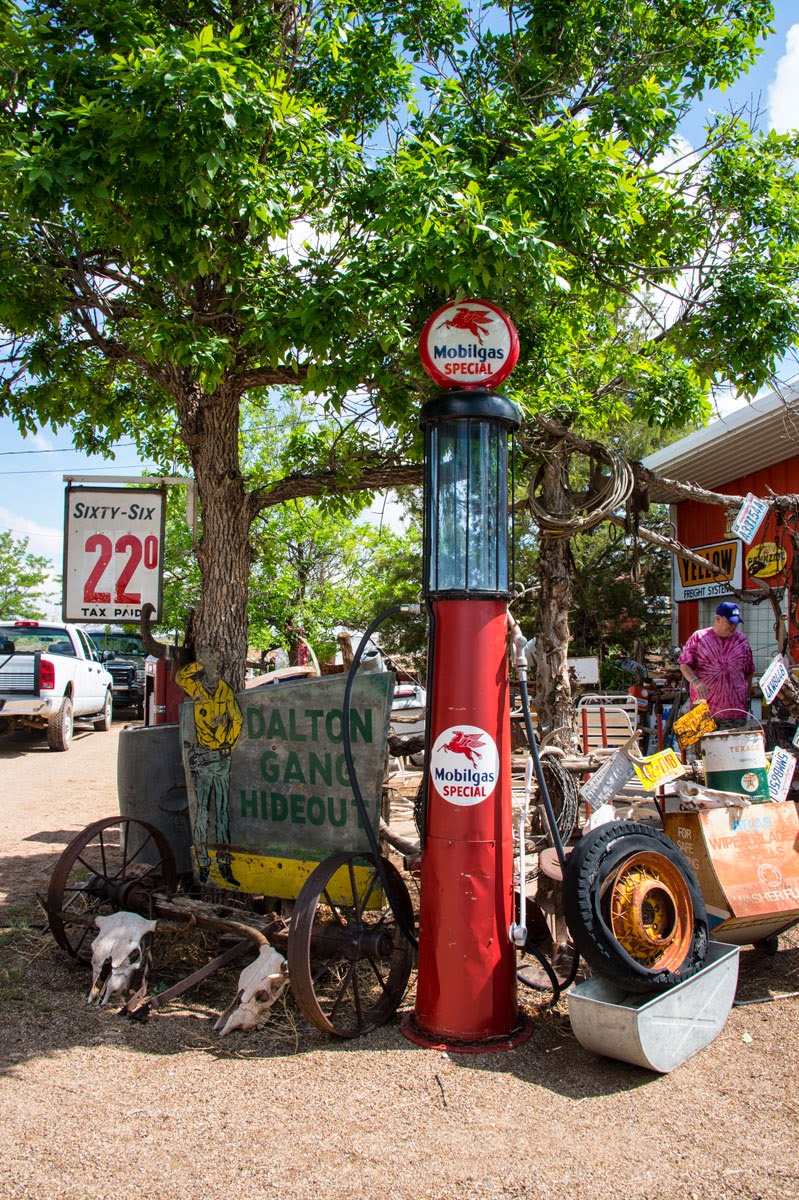 Here's Mator Tow ... in case you need a little help.  He's parked out front ... and if the yellow light is flashing, stop in and check out the gas pumps!! 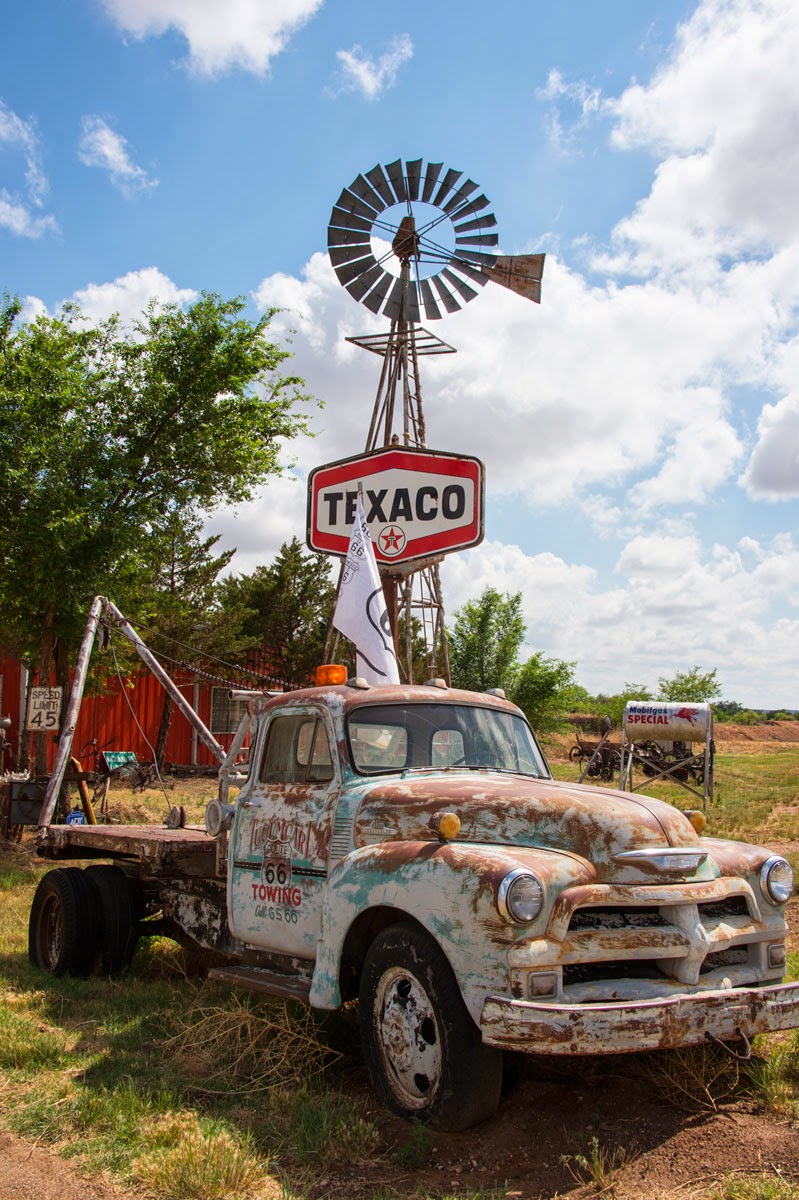 One of the most famous motels in town is the Blue Swallow Court.  Course I've never heard of it, but then I never traveled this highway in the 50's.  Here's a picture from 1953. 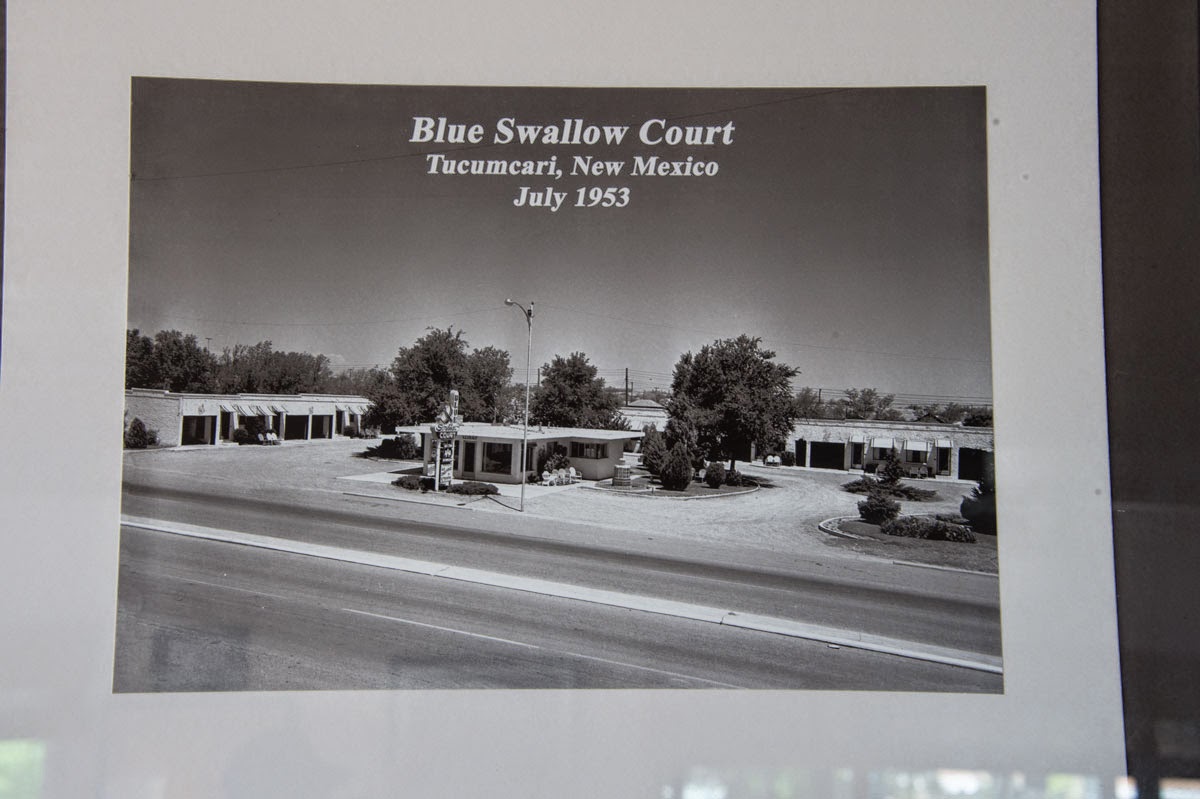 It looks exactly the same today as it did then, which is pretty amazing.  Even if you don't plan to stay here, stop in and meet the new owners Kevin and Nancy.  They have a tiny gift shop with really neat stuff you can purchase.  After all, every little bit helps!! 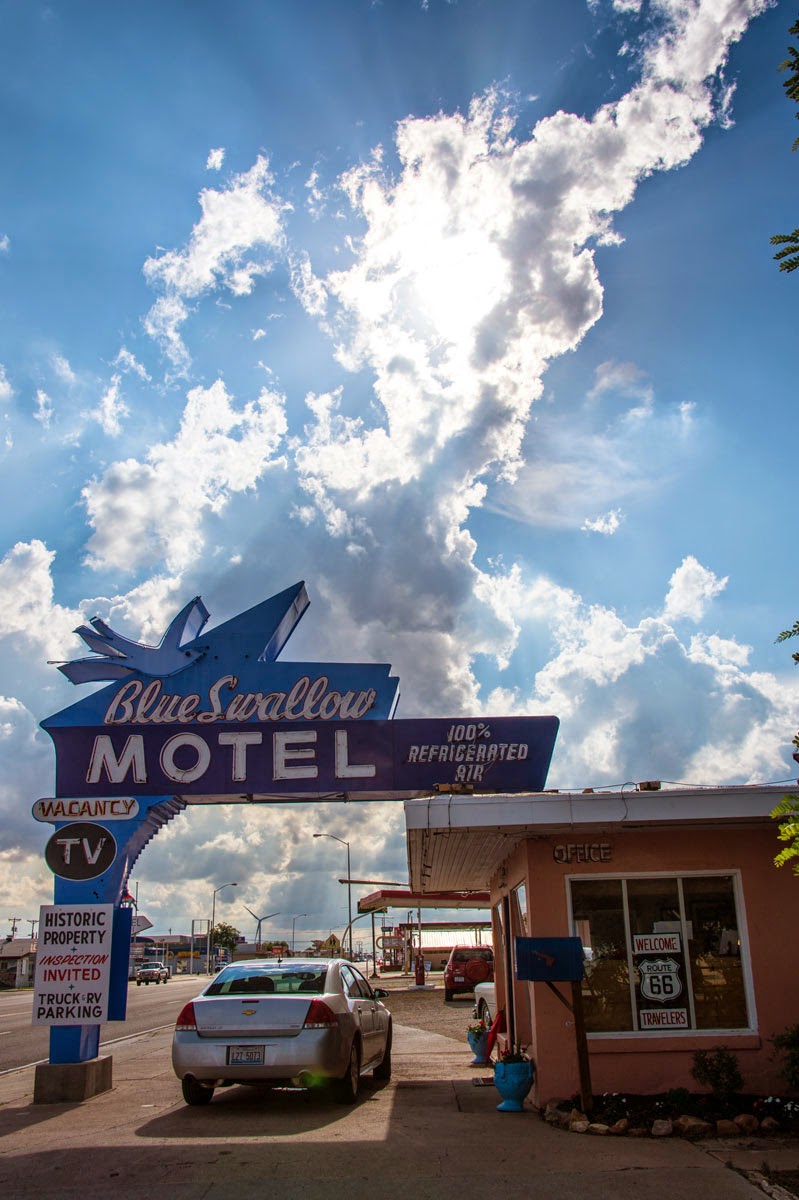 Almost every room has a garage where you can park your car out of the sun, or rain as the case may be.  Your Hummer probably won't fit, but your Volkswagon will!!  There's those pretty fluffy clouds again. 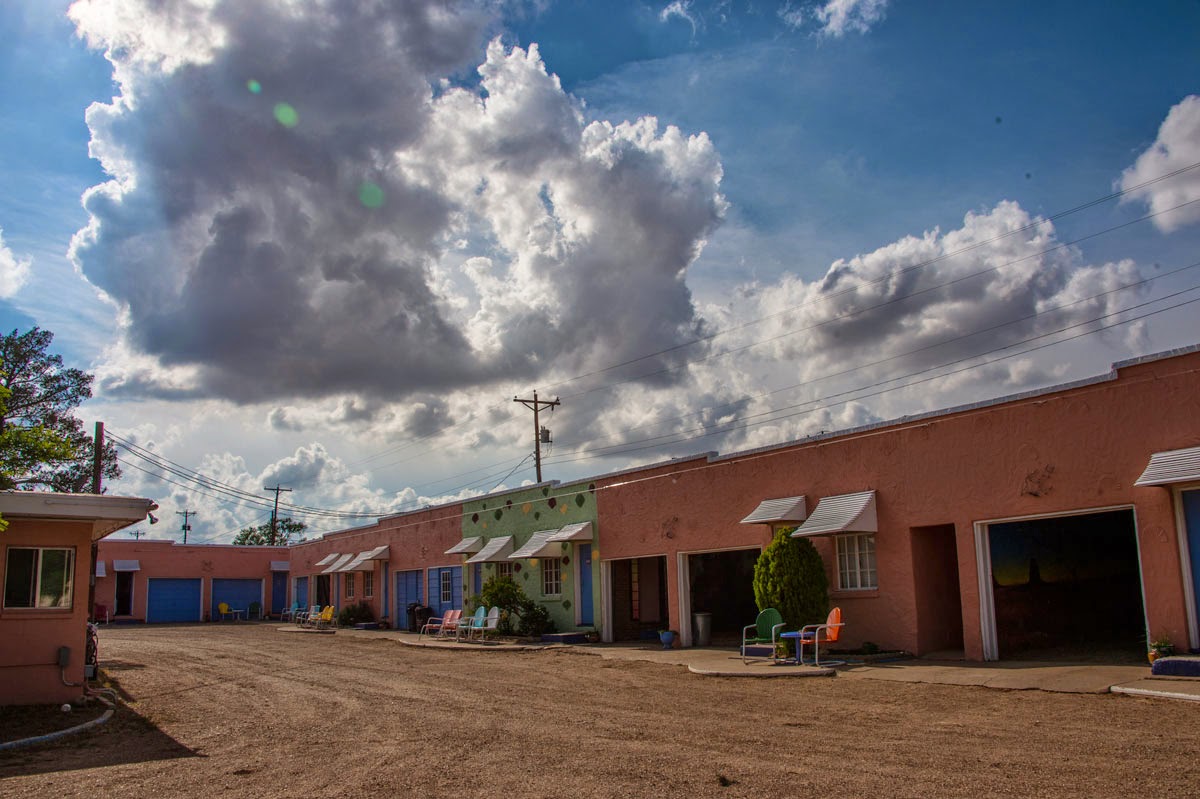 Outside every room is your own personal metal chair or glider to sit in and relax as you watch the world go by.  This place really will take you back to the old days!! 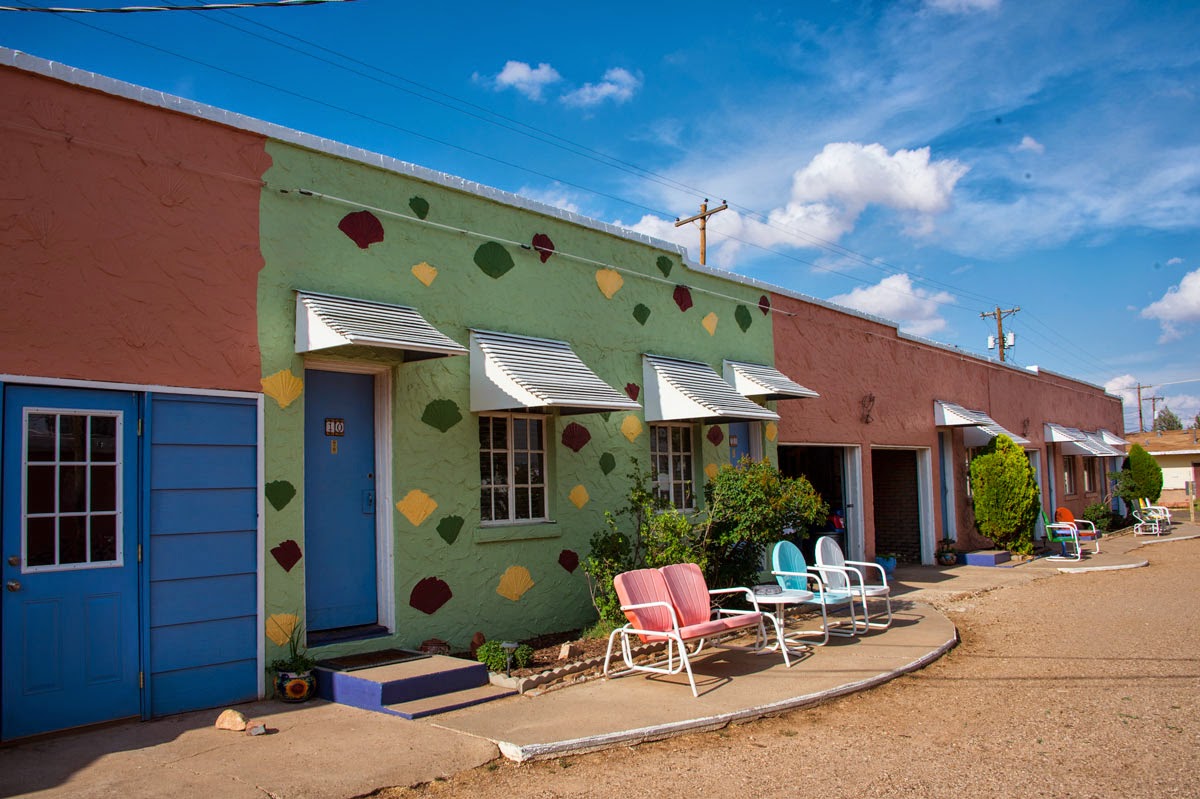 The garages have been painted with GREAT scenes from those old days ... remember Easy Rider??  If you're in to nostalgia at all, the Blue Swallow is a MUST stop in Tucumcari.  This part of town has definitely come alive again!! 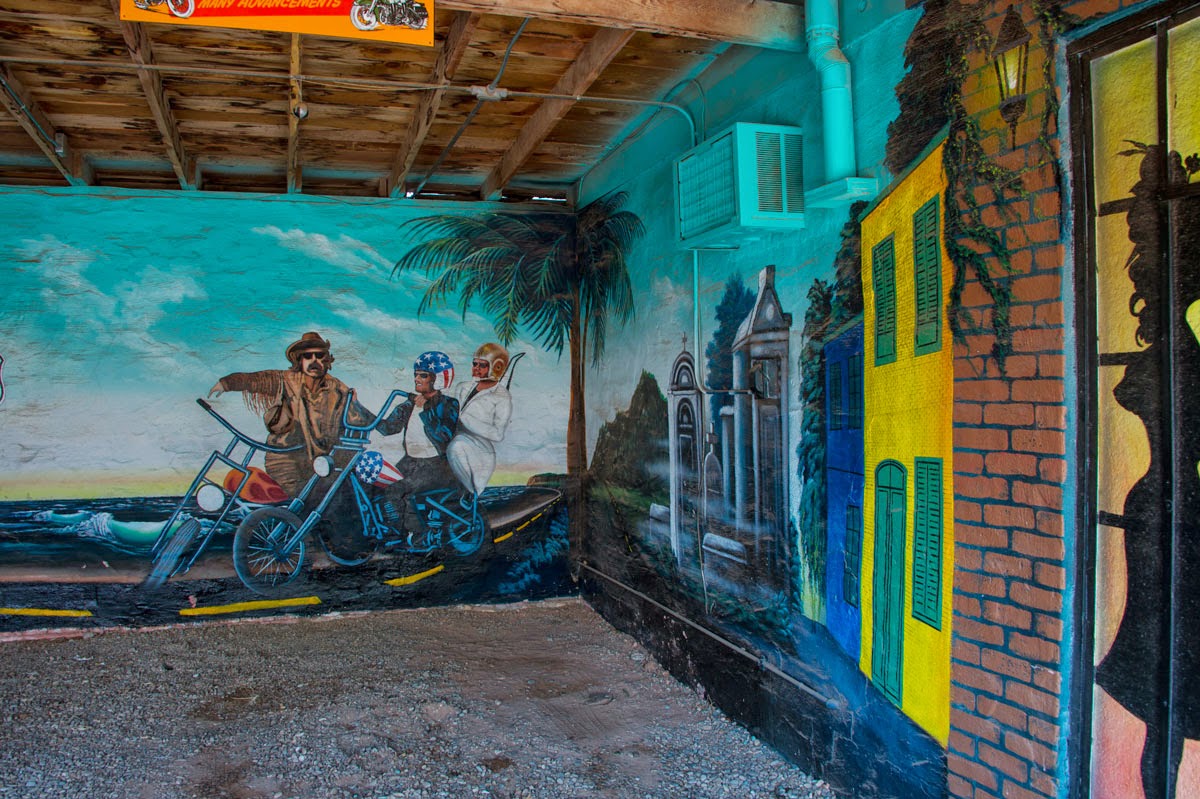 Another cache out in the bushes, mucking through swamps from the rain, and it was time for dinner.  Nancy at the Blue Swallow recommended THIS restaurant with the Lizard Lounge.  I think they have live music on Friday and Saturday if you're interesting in partying the night away. 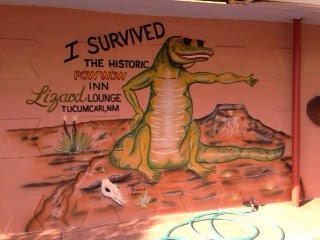 We actually were looking for the Pow Wow Restaurant ... whose entrance was on the other side of the building.  No matter ... there are some interesting photos hanging on the wall in the bar around the dance floor and a great mural behind the bandstand!! 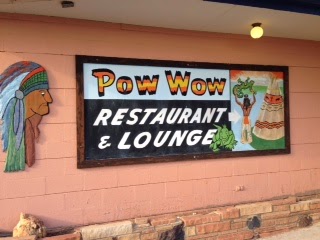 And some even MORE interesting paintings in the restaurant booths.  These images are so lifelike you think you are joining someone at the table.  AMAZING paintings!!!  Barbara and I had Mexican food which was excellent ... Tom had chicken fried steak which looked yummy. 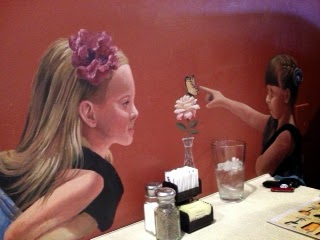 By now it's late, but we have to hit the store.  Ben and Jerry have been calling my name for the last few days.  Even though it was a beautiful sunny day, those clouds above came in heavy last night.  There was thunder and lightning with another couple of inches of wet stuff dropped on our roofs.  The locals are practically dancing in the streets, they're so happy about the rain.  It's supposed to continue through today and tomorrow, so if I'm cooped up in the rig, at least I'll have something sweet to snack on!!