After a wonderful breakfast and catching up with friends, we drove around Disneyland and over to the Fullerton Amtrak Santa Fe Railway Station for some rail riding.  No, we really didn't ride the freight train, although that might have been pretty fun ... 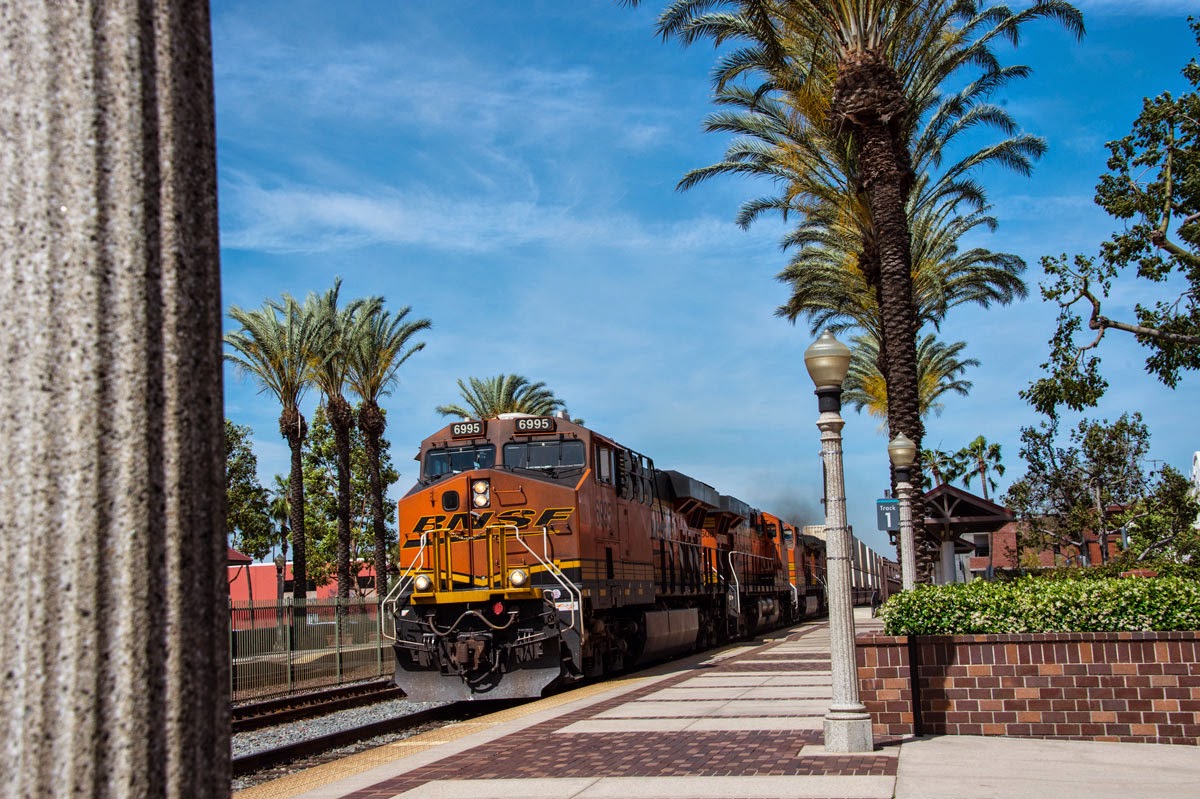 Instead, we boarded the Amtrak Surfliner heading to Los Angeles.  It was a very smooth and comfortable trip ... except since it goes both ways, half the car faces South and half the car faces North.  Traveling backwards makes my stomach unhappy, so I kneeled in the seat and watched over the headrest.  These are VERY nice cars ... coach seats being upstairs where the view is. 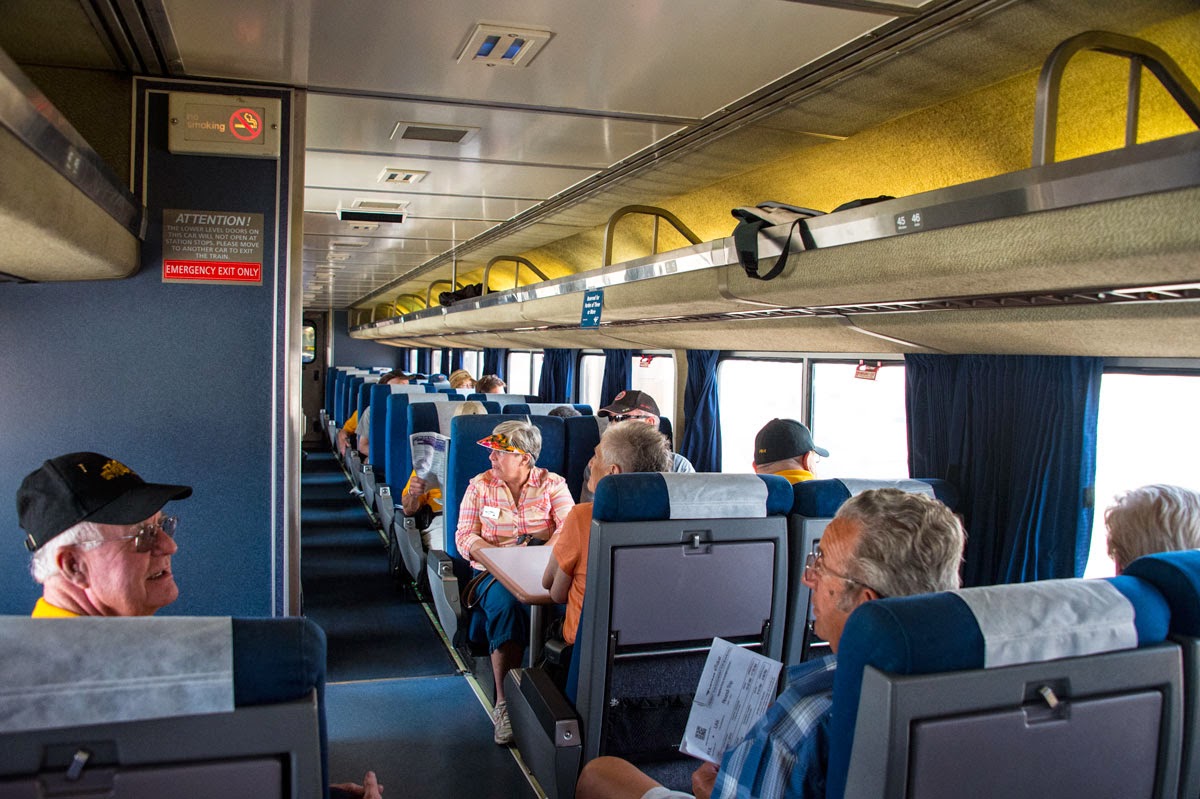 Along the way we skirted the LA River ... who knew LA had a river? ... where all the movie race car and murder scenes are filmed!!  I'm SURE I've seen this exact spot!!! At any rate, it was a great trip, landing us at Union Station ... and what a beauty it is!  They are in the process of renovating the entire structure in order to save the beautiful marble inlaid floors and wood panel ceilings. 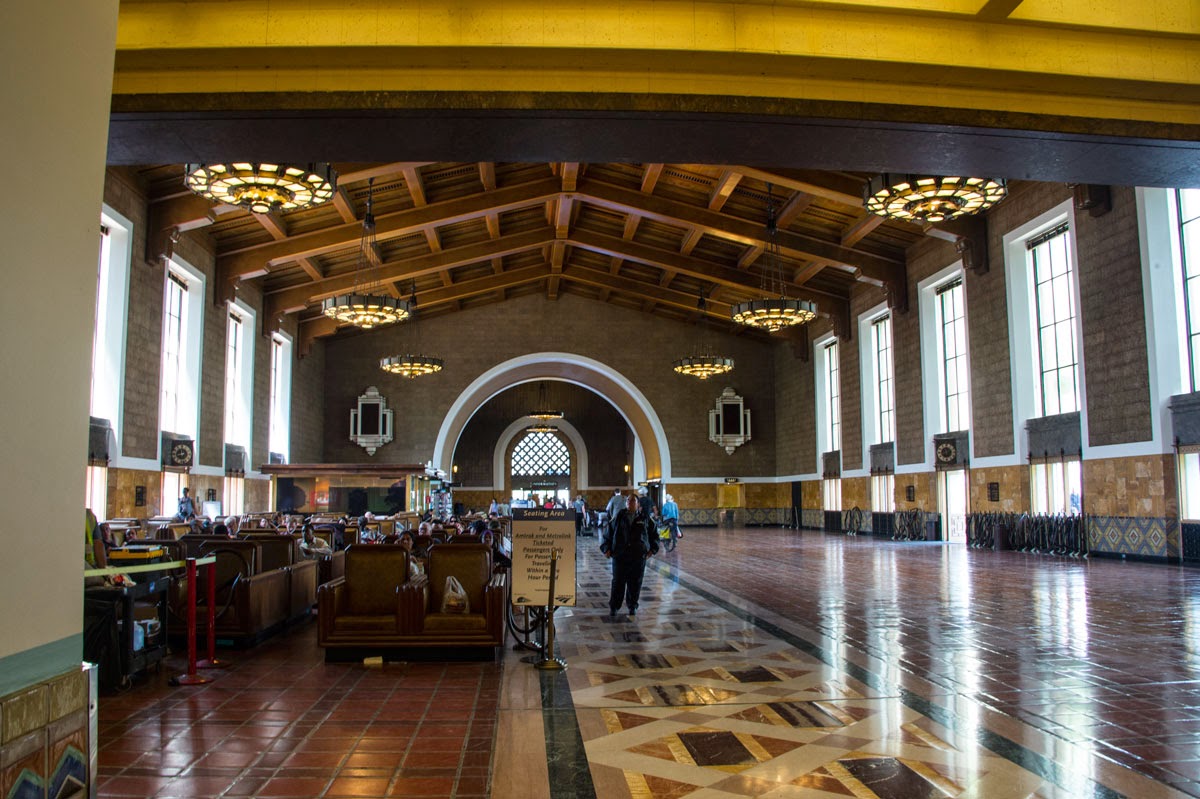 As we walked outside, the Union Station Clock Tower was beautiful against the sky.  Flowers, flowers everywhere ... blooming in the hot California sun!! 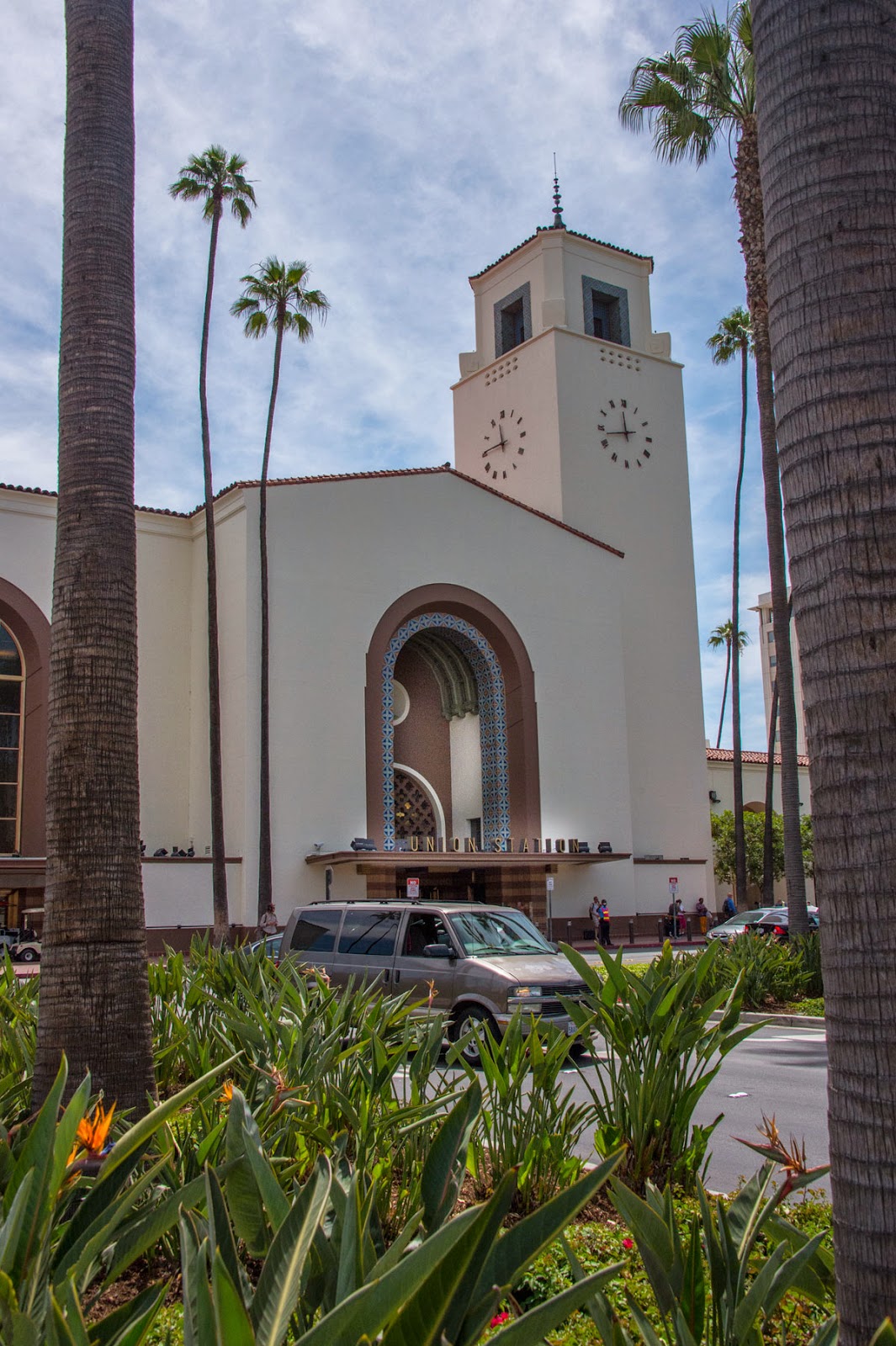 Across the street is a courtyard and statue dedicated to Antonio Aguilar, musician and screen star of over 167 movies.  Never heard of him??  Me either ... so we googled him to find out he's the most prolific Singer/Movie Star of all Mexico and even has a star on the Hollywood Walk of Fame!! 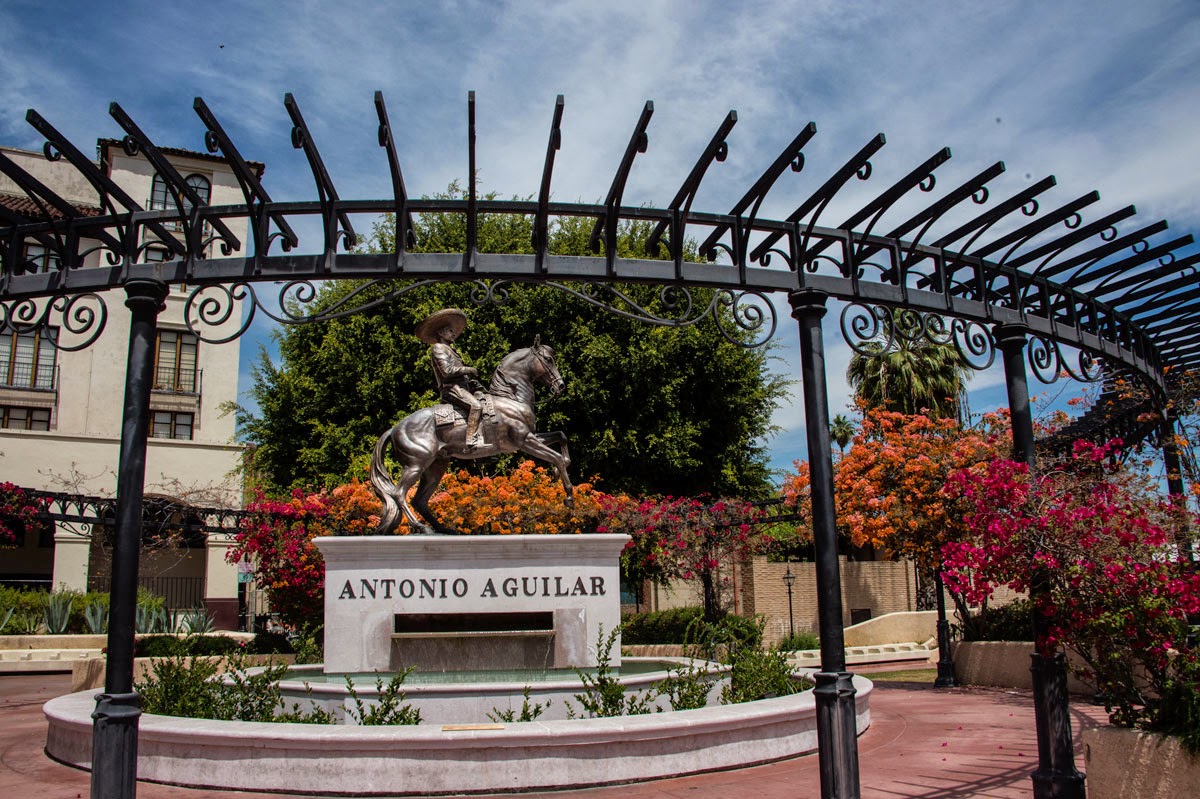 Directly behind Olvera Street is the Avila Adobe, the longest standing adobe structure in this area.    They discovered an underground water system here which was used for drinking and irrigation water.  Recently, not far away, another 100' of adobe brick pipe was found during some construction, which will be moved to a museum as an example of the first underground water system built in this area. 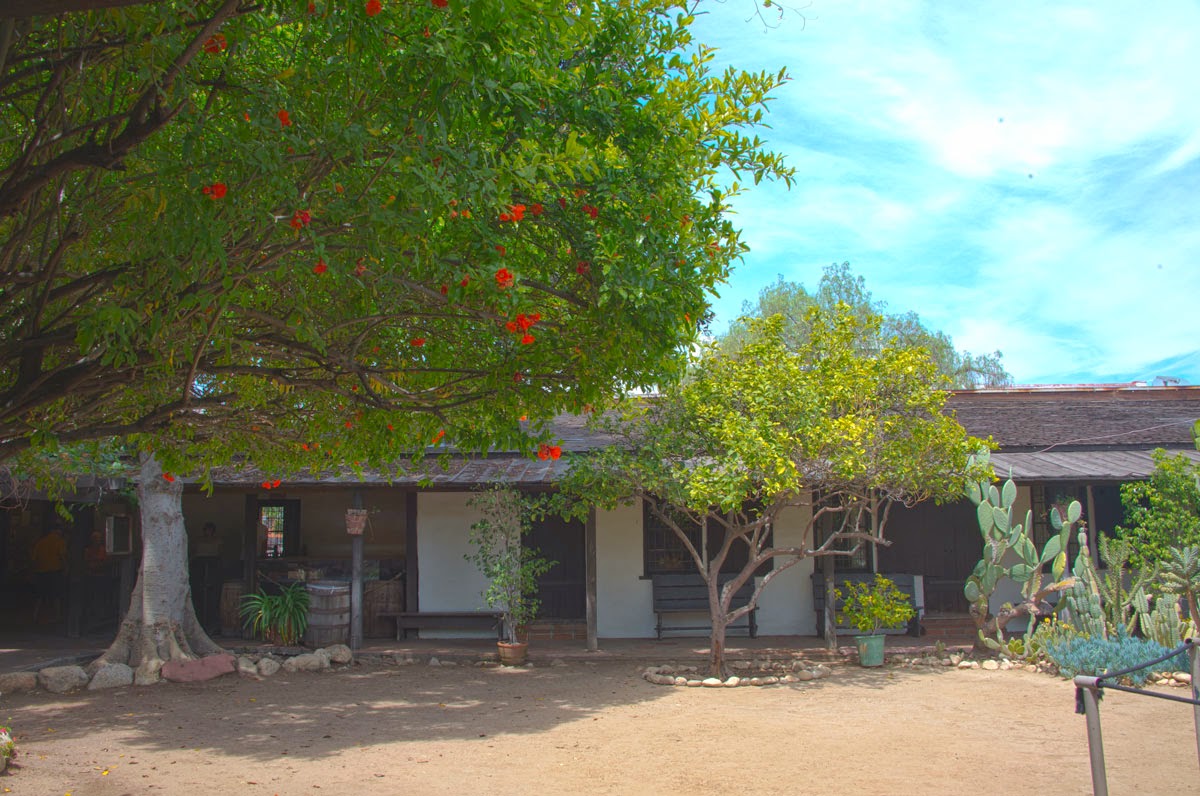 The inside is amazing, filled with furniture from Europe, paid for with the hides and tallow from the huge cattle ranches that covered this area before the tourists settled here. 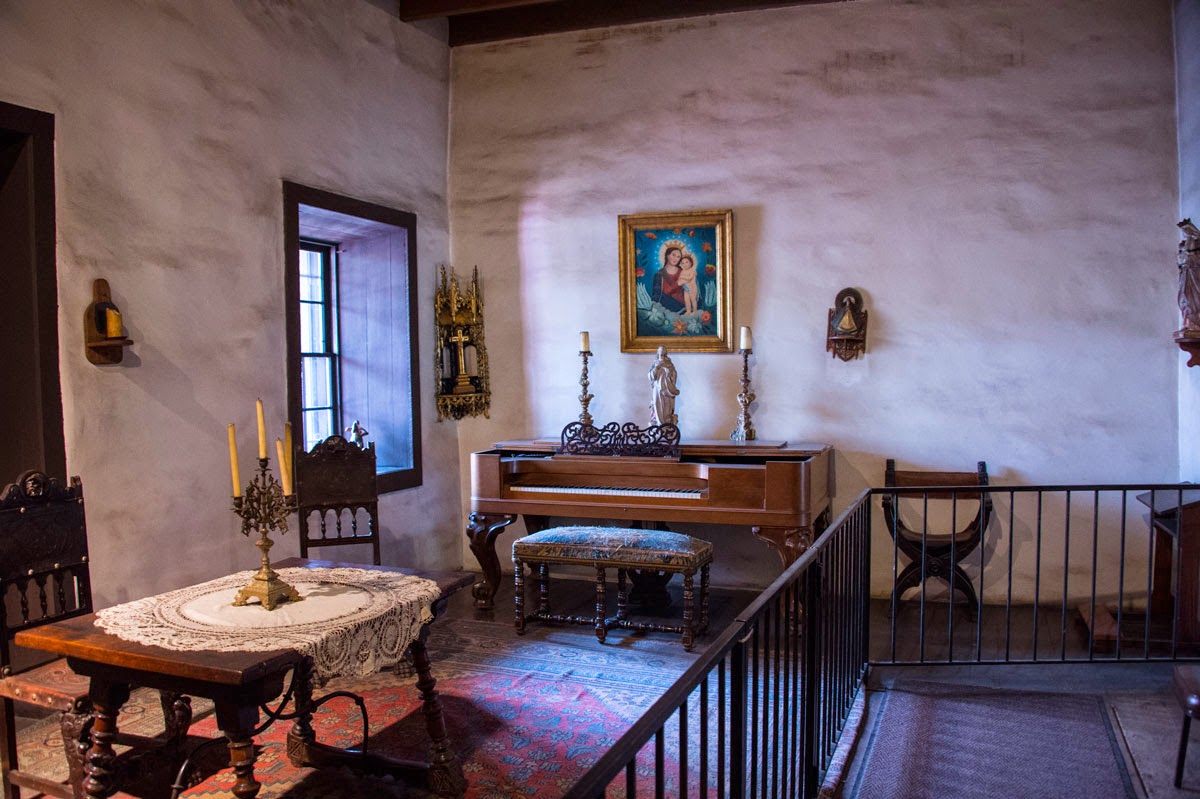 The outside kitchen in the courtyard was probably used more than this small one inside. 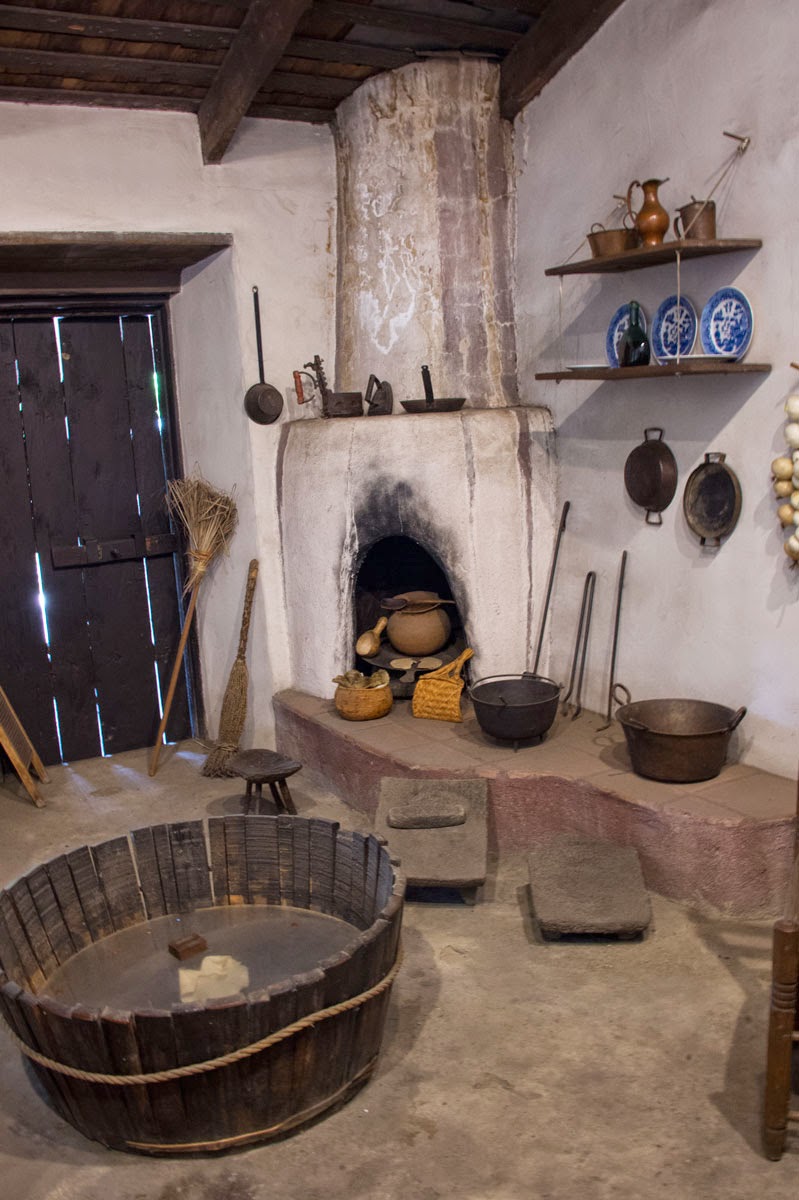 This adobe actually sits in the middle of Olvera street, a long block of beautiful colors from all the clothing and souvenirs from Mexico.  Tucked into several tiny areas were restaurants serving what smelled like GREAT food!  I'm hungry .. when do we eat??? 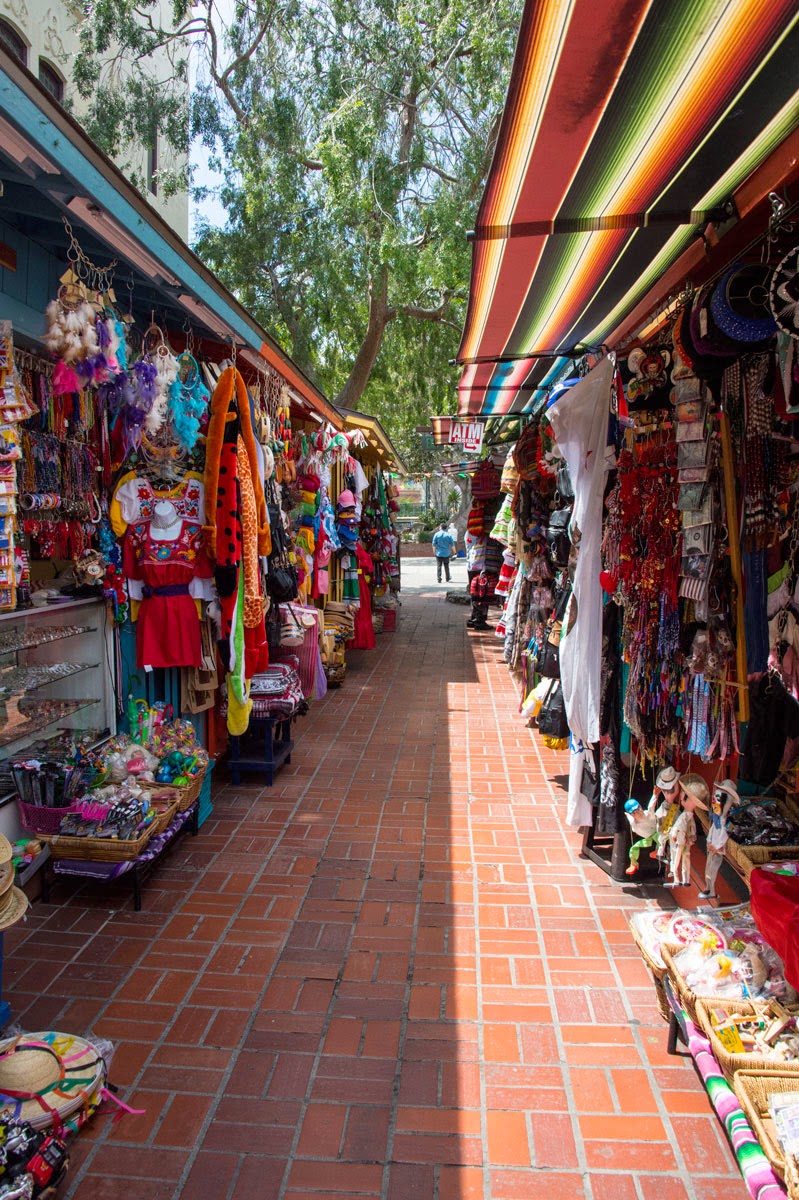 Along the edges are these old brick buildings housing dress shops (air-conditioned) which we checked out so we could cool off a mite.  The wind left us and it's about 92 degrees with the strongest sun I've felt in some time!! 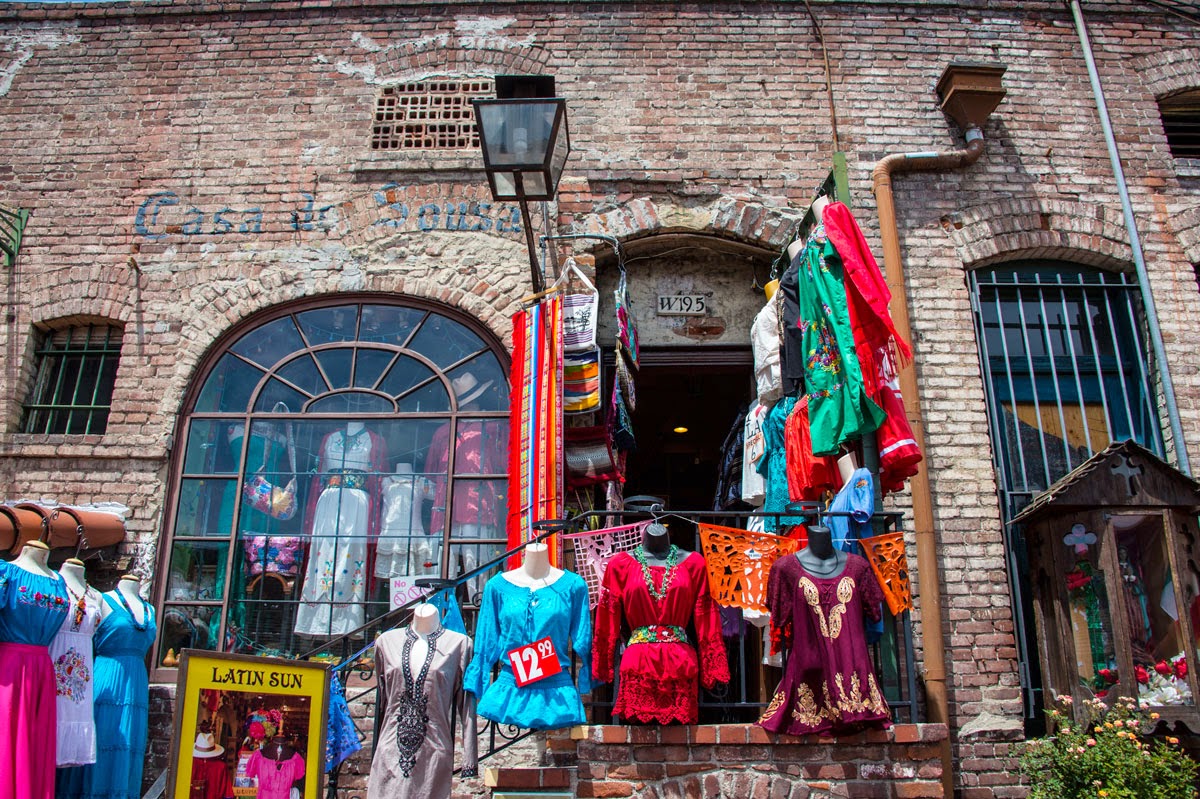 Always popular for photo shoots, there were every kind of wrestling mask you could want. 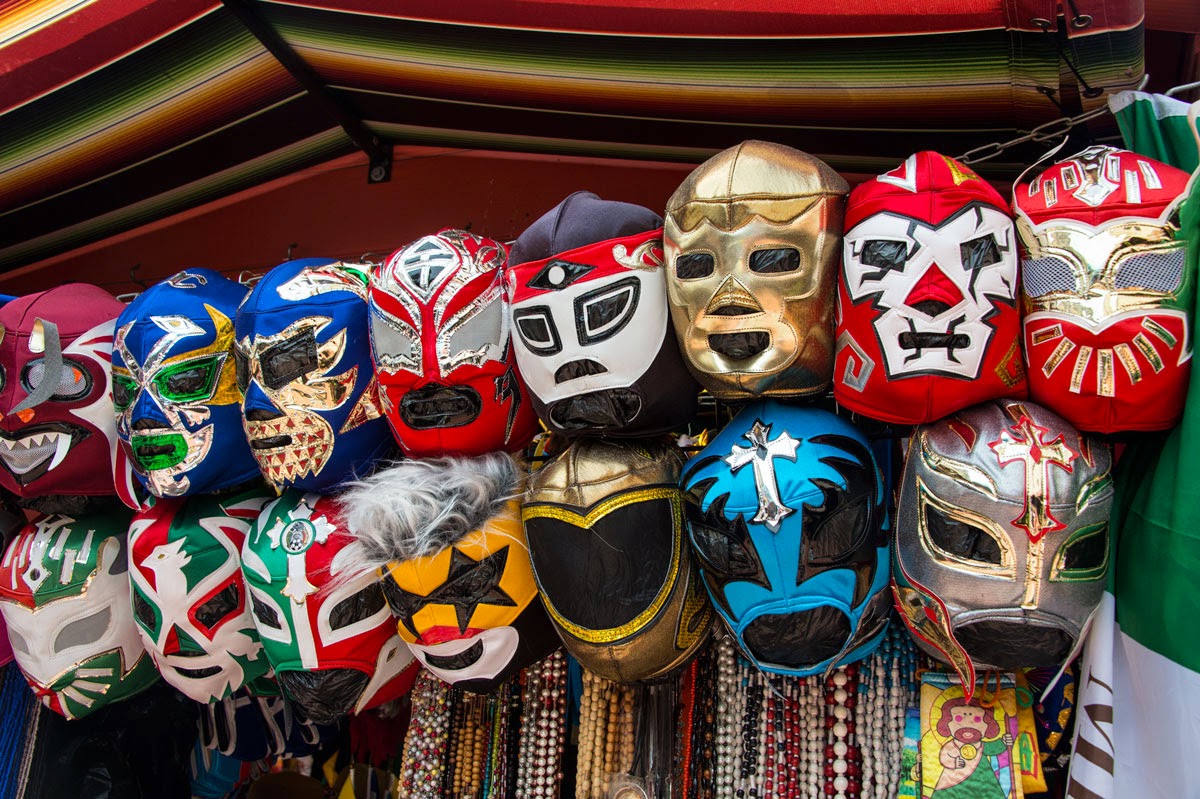 Along with these colorful guitars. 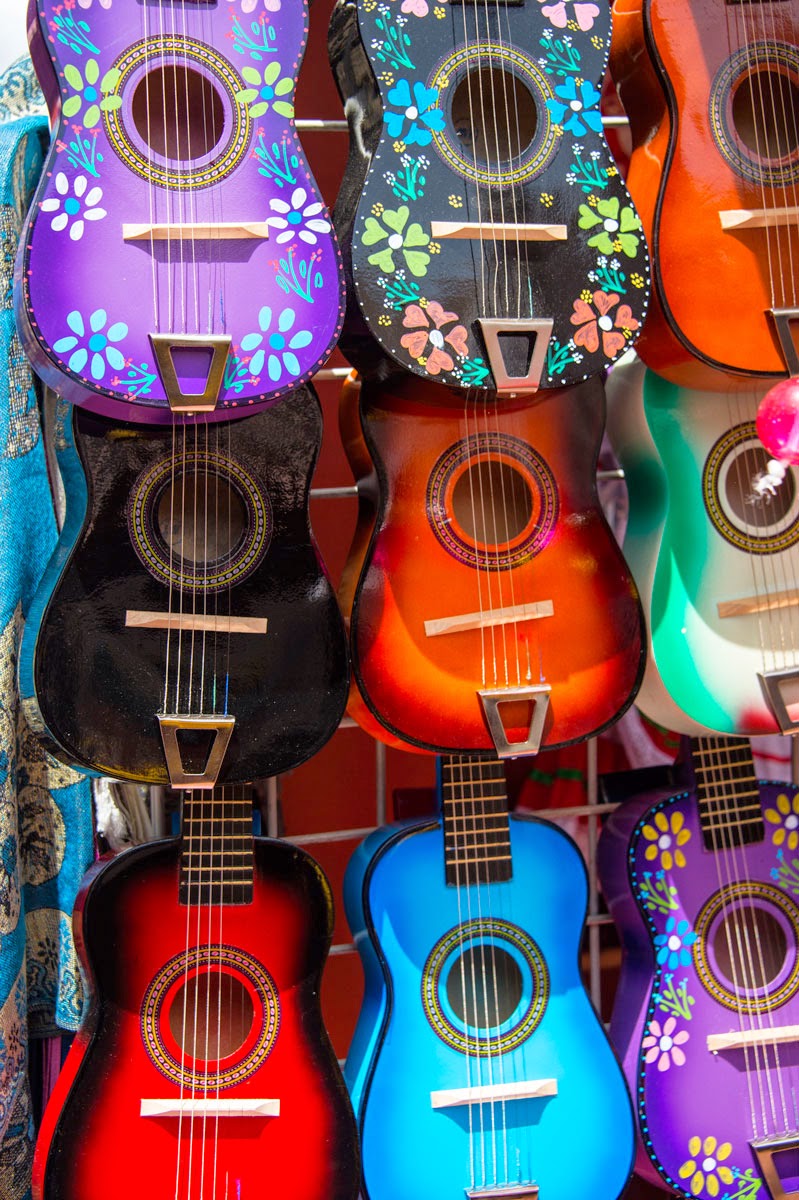 The end of Olvera street shocked us back to reality when we saw the Chevron fuel sign ... and I thought our fuel was expensive.  From here we walked to Phillipes for some yummy french dip sandwiches, and then on to China town where Barbara and I purchased little fans (portable air conditioning) for the warm trip to Kansas City and East.  I plan on keeping one or two in my purse at all times.  For $2.00 each (and one for $1.50 .. what a bargain) I'm sure they will last "long enough". 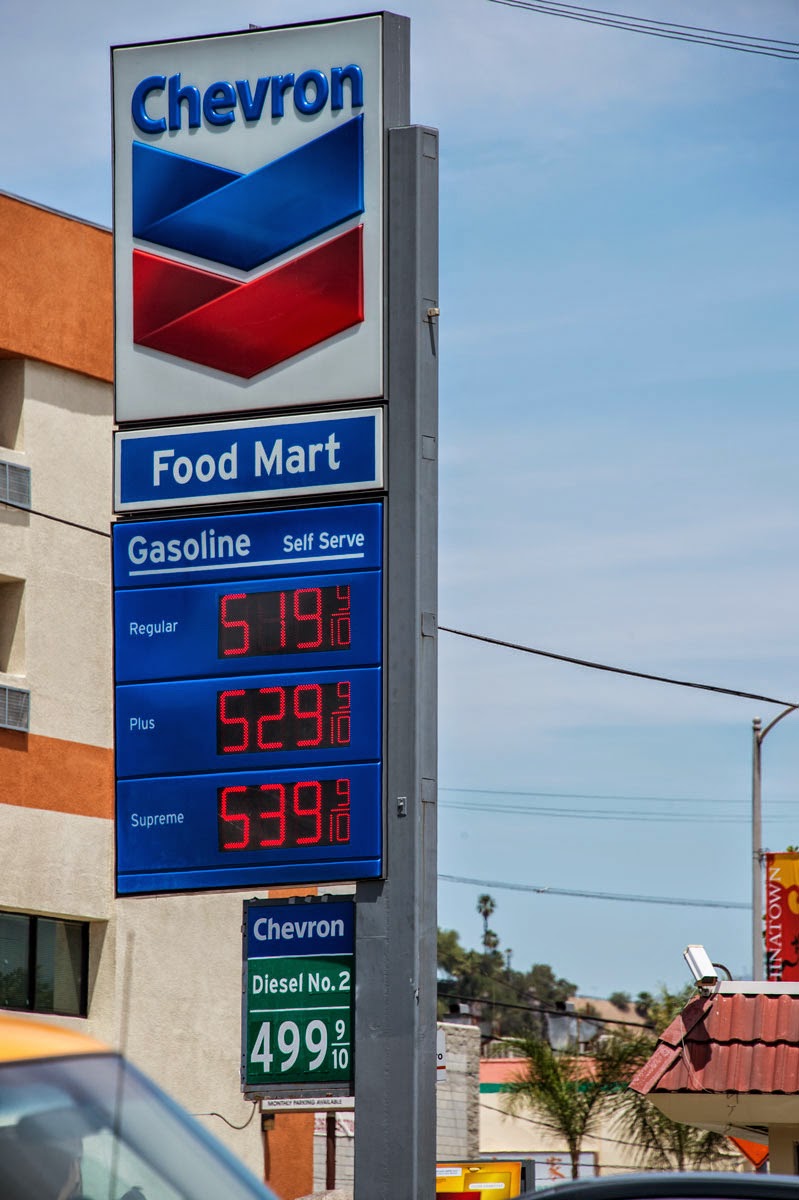 Back at the station, we shirted around the Deportation Protest that was going on.  Those that wanted to explore Exposition Park were disappointed that the buses were canceled due to the protest.   While waiting for our train to arrive, I discovered the Ben & Jerry's store ... creating a run on ice cream.  It was then that Barbara said we would tour the Ben & Jerry's plant back east ... YUM YUM!!! The ride back to Fullerton was a quick one, as Amtrak heads to San Diego.  What a great way to travel!!  While most of the group dined at the Spaghetti Factory, I opted to return to my rig to let the puppies out.  After ice cream, I probably didn't need any of those calories anyway!

Today I'm heading to the Planes of Fame at Chino Airport.  I hear it's a great museum and perfect for some photography.