The ugly wind blew all day!!!  I took a quick trip to the grocery store to pick up some pepsi and ice (hey, it's better than martinis!!) and made sure not to park near any trees, as they are falling all around us.  I came out just in time to see Ralph's employees running to the edge of the parking lot.  The wind had actually knocked over their big sign ... and of course it hit the unlucky lady who was walking by.  She was fine ... but you just never know what may fall from the sky on your head!!

Good friends Patty and Dan Chance arrived around noon and promptly headed off for a burger.  You know Dan, and this town is burger city!!  Later, still being blown about by the Santa Ana's, and with appetizers and a can of soup in hand, we headed to the clubhouse for a Souper Dooper dinner.  The rally was officially begun as Hosts Anita and Ed Price introduced themselves, along with co-hosts Betsy and Dan St John.  We all stood up and introduced ourselves, as we have several new members and some returning members. 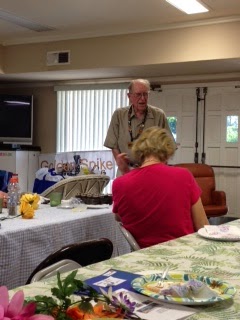 The men brought a can of red soup, the women a can of white, which was all dumped into two big pots for dinner.  With appetizers, salad and bread, we were stuffed in no time!! 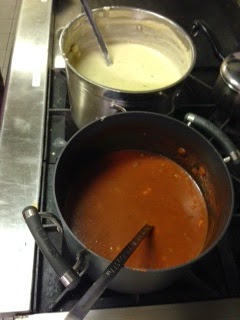 Dessert ... a YUMMY Costco Golden Spike cake!!!  You KNOW I didn't leave the building without a piece!!! 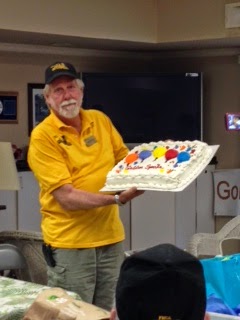 After going over the scheduled events for today, I headed outside to find the wind had died down completely.  Not even a slight breeze!!!  Thankfully, it remained that way the entire night and I got a great night's sleep!!!  I'm ready to hit the streets with my camera.  We are driving to the Fullerton Train Station where we will hop on for the short ride to LA.  From there it's a bus ride to Exposition Park or a nice walk down Olvera Street (my choice).  This evening we'll have dinner at the Spaghetti Factory, an old train station.  As I type, the winds are picking back up, hopefully not up to the 60-90 mph as it was yesterday!!