Standing On The Corner In Winslow Arizona!!

You guessed it ... I have that Eagles song in my head and it won't go away!  I was singing it before we even got to Winslow Arizona.  I left Thousand Trails and caught up with Tom and Barbara as we headed East again.  Thousand Trails is it's usual self ... crowded with many more permanent sites than last year.  Apparently now you can reserve sites by the month, leaving very few for those of us that travel.  FYI Thousand Trails Members .... You CAN stay in an empty site that has a METER on the electric service.  I didn't know that initially (and they don't tell you), which severely limited my choice of site.

Cruising across the desert at a respectable 60 mph (saving fuel) trucks passed us like we were standing still!!  The speed limit is 75 mph here for EVERYONE and the truckers take full advantage!! 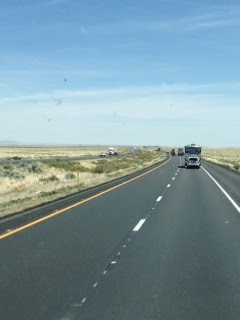 After a quick stop in Flagstaff, hiding out behind an Albertson's store while Barbara picked up two phone cases for her new play toys, we headed for the Elks Lodge in Winslow, where we got the only two 30 amp hookups.  With a $10 donation, we were welcome to stay.  Two more rigs came in later, relegated to the 110 household plugins.

We made a quick trip straight to La Posada Hotel Restaurant, an amazing Fred Harvey Hotel designed by Mary Colter of Grand Canyon Fame.  Once a splendid hotel to the stars, it fell into disrepair and was eventually used by the Railroad for it's headquarters.  Sadly, it was trashed.  For sale for years, a family finally purchased the building and has been restoring it to it's original glory.  It's one of the most fascinating buildings I've ever been in.  Be sure to stop here and have lunch!! 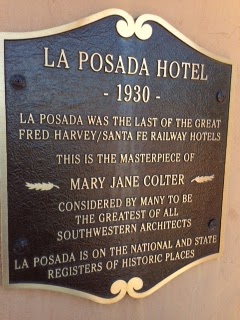 Surrounded by patios and alcoves, they are still working on getting the grounds in shape.  This is the entrance from the street side.  There is another entrance on the South side for train passengers. 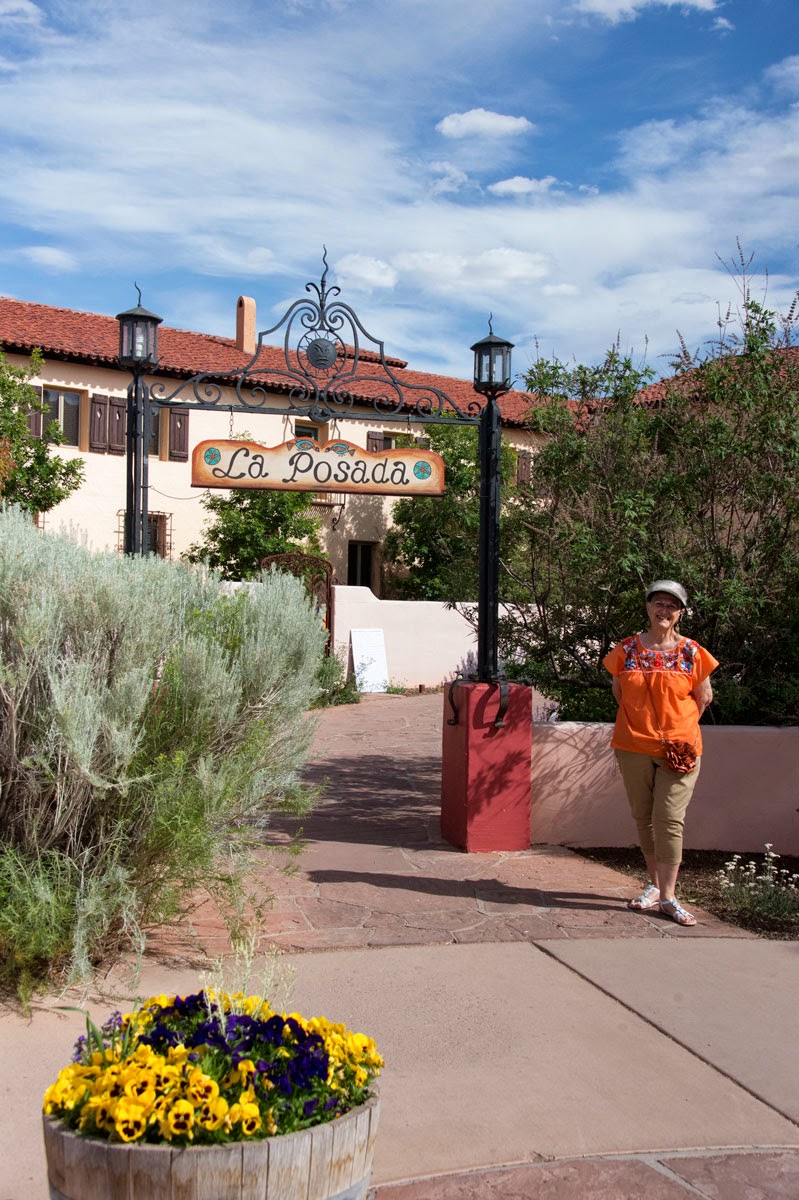 This was a major stop for the Santa Fe passenger trains of old, which ran by within yards of the back door.  The floors have been restored and the ceilings returned to their original splendor.  Some of the original furnishings have been returned to boot.  There is a small room with a video of the whole story that you should definitely see. 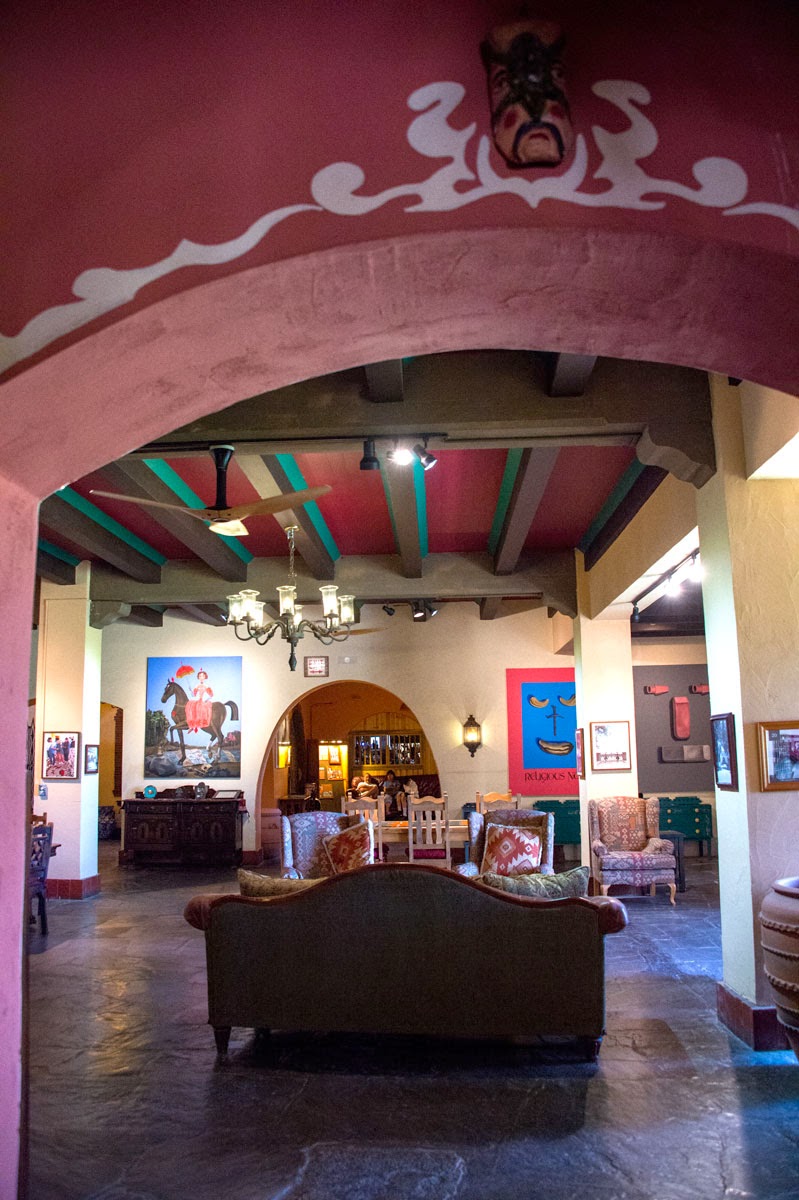 The walls were covered with amazing works of art.  Upstairs in the ballroom is a museum gallery displaying modern paintings.  I think this artist needed a long vacation ... every oil painting depicted death in one way or another!! 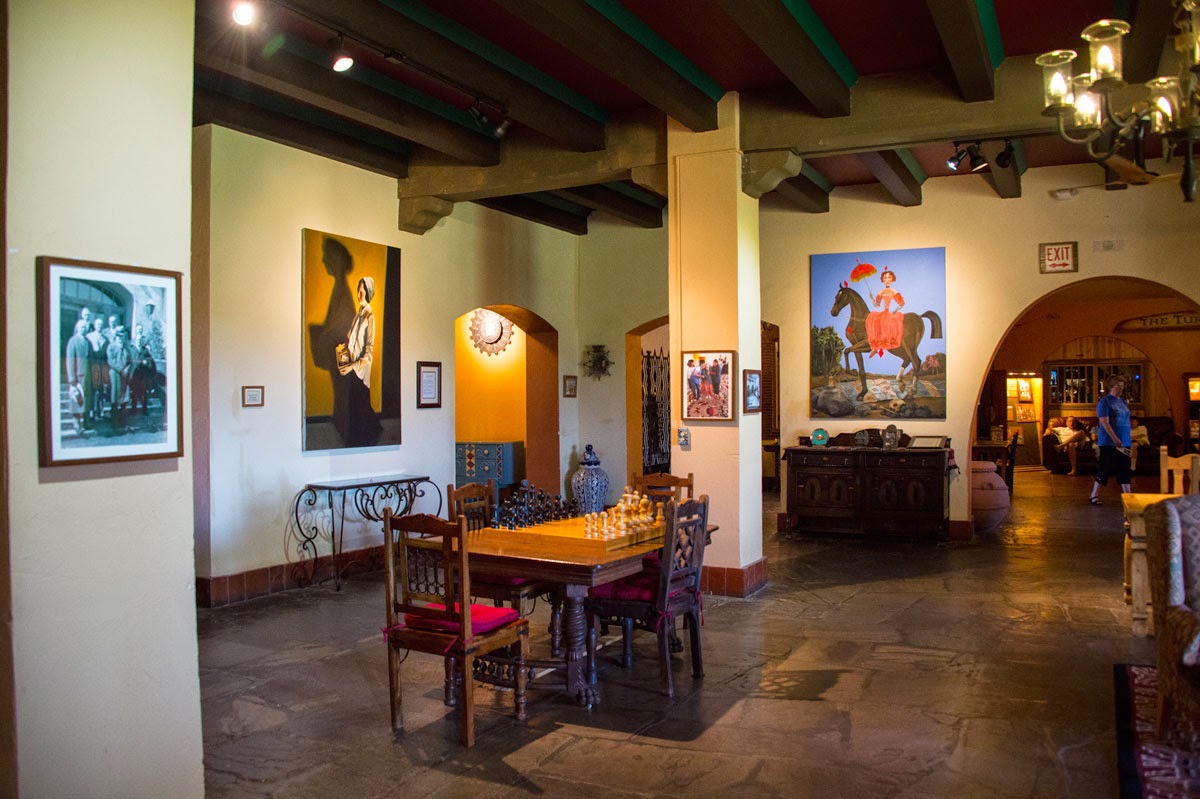 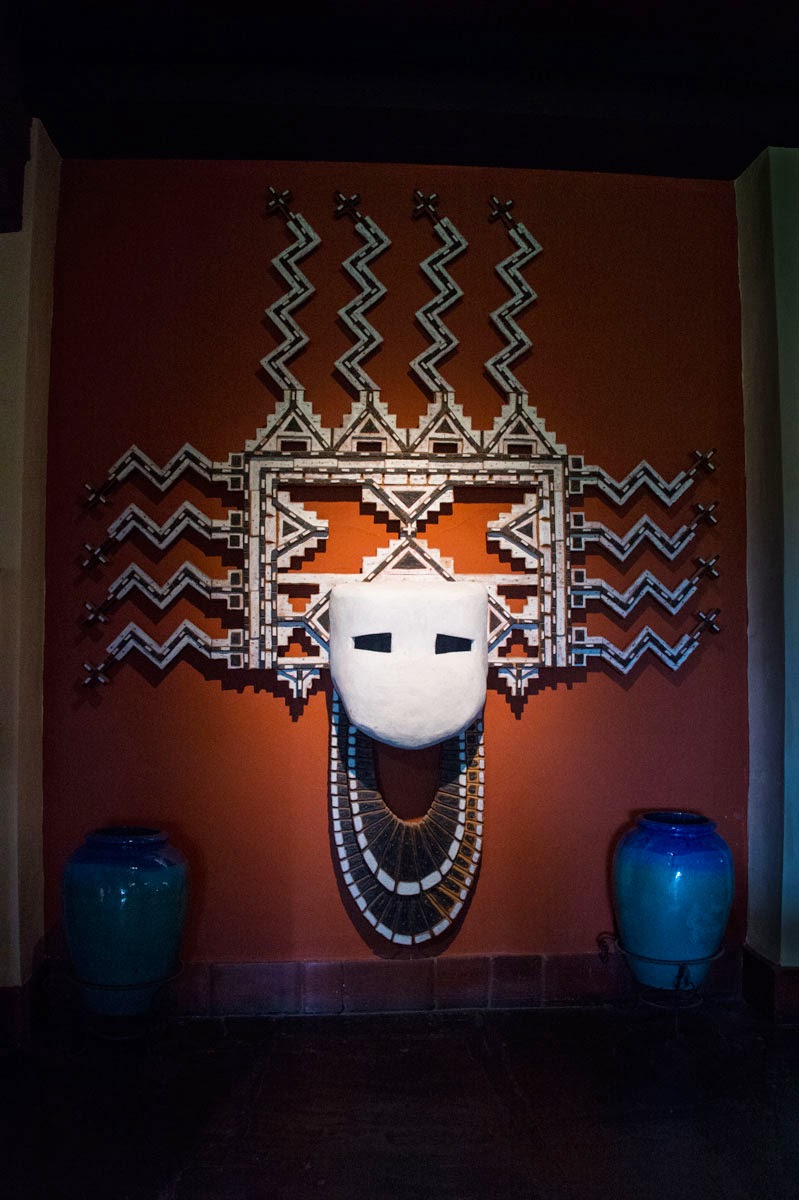 My placemat at the restaurant reminded me to get my kicks here, which I did by ordering Carnitas with tomale AND ....... 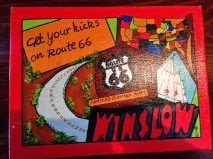 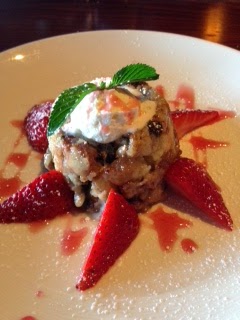 From La Posada, we really DID stand on the corner in Winslow Arizona at this site honoring the Eagles and their song "Take It Easy".  In fact, I stood there for quite some time to get this image without six people in questionable attire standing in the middle waving their arms!! 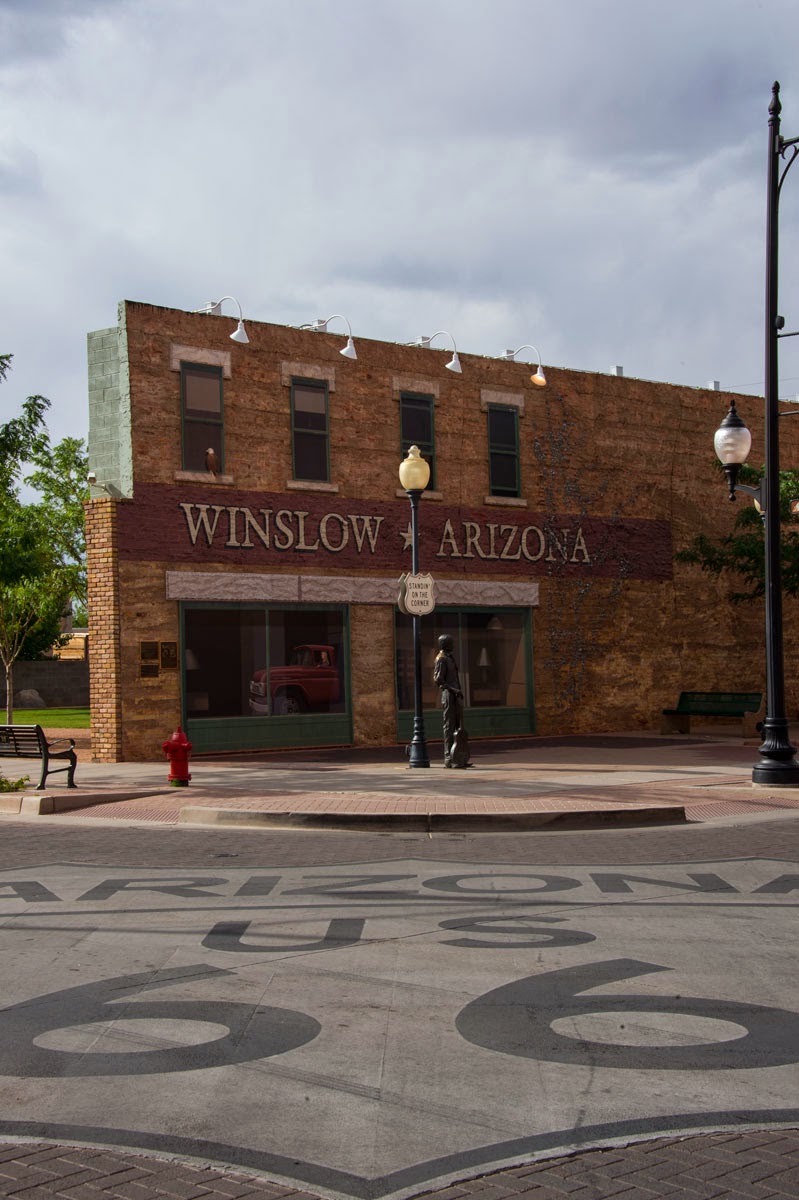 This display was built by the Kaufman family ... including the flatbed truck parked just to the right. 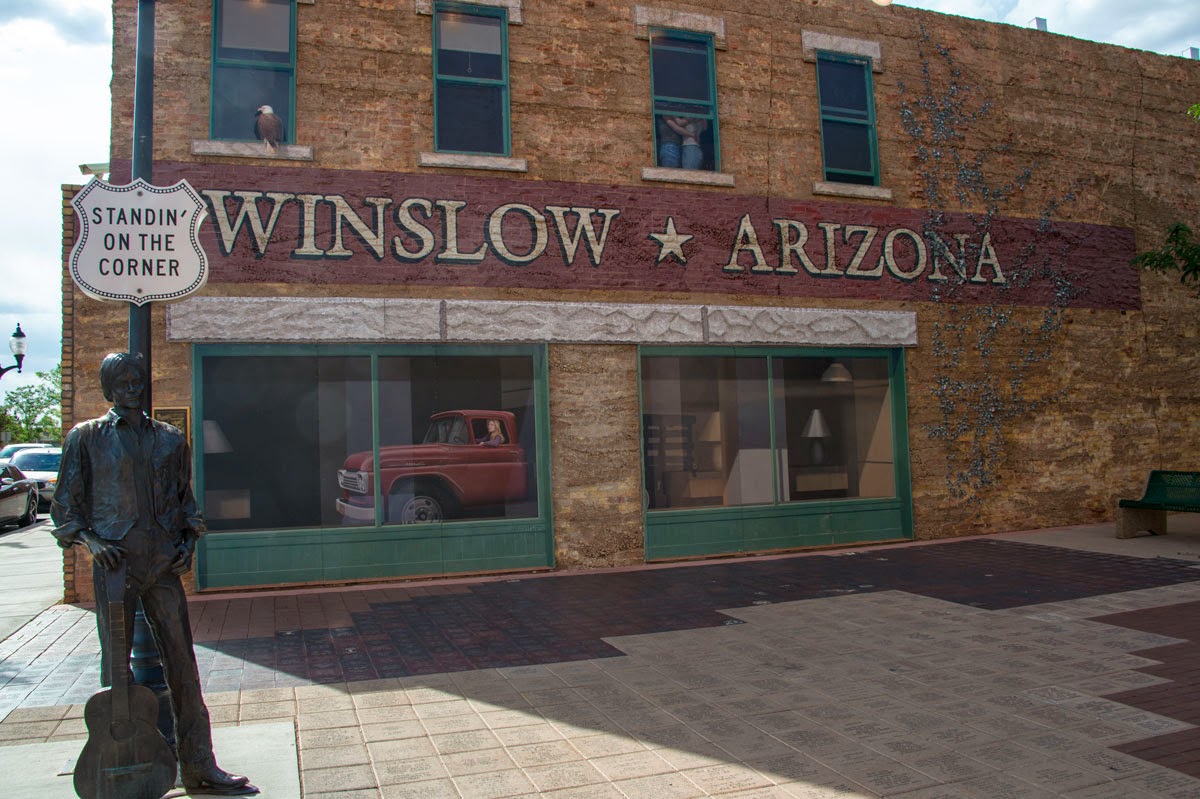 Back at the rig, I tried to figure out how to force myself to sleep, to no avail.  It was another sleepless night.  What are YOUR tips for getting a good nights rest when the RV next door leaves their generator running until midnight?  It's just plain rude!!   I've always been a light sleeper, even with Advil PM and earplugs!!  Making it worse, my alarm on the floor (for carbon monoxide or whatever fumes may be lurking) started beeping at 4:00 am making for an earlier morning than I expected.  I'm going to rip that thing out by it roots!!!  In case you were wondering, two trains came by also, but most people probably wouldn't have heard them!!  It's all just part of the Great Adventure!!!