I'm Getting Coal For Christmas!!

Nancy has been a very bad girl.  As much as I thought I was doing good, turns out I wasn't and the results are as high as pie in the sky.  That quick trip to the Doctor's Office actually WAS rather quick.  I'm healthy as a horse in every aspect except one.  The dreaded Cholesterol!!

When he said it was 294, I thought YAY ... it's below 300.  WRONG!!  It's supposed to be below 200.  Gee, I gave up ice cream three months ago and rarely eat red meat.  Okay, not exactly rarely because I did smoke those ribs, but mostly I eat turkey, chicken and bread (slathered in butter).  I suppose those six glasses of chocolate mousse weren't great, but I HAD to find the piece of spatula.

He ordered a prescription for something I can't pronounce.  I stopped by the pharmacy to make sure they didn't need anything.  "Who's your insurance carrier?"  I don't have one.  It didn't matter what my cholesterol was because the price of the meds almost killed me.  $175.88 for three months.  It's okay ... I have a savings account and will be in Mexico in January where I'll stock up.

I actually admitted to the doctor my intention to buy in Mexico and his response was "I have no problem with their medications".  That's good to know!!

An hour later when I went to pick it up, everything had magically disappeared.  They didn't have any information.  Good thing the girl remembered my shock at the price.  They called, got another prescription and filled it.  So I'll be getting coal for Christmas, and if it doesn't TASTE like coal, then I shouldn't eat it.

The rest of the afternoon I spent looking for this book.  I truly don't know who made this up, but they went to the Isle of Man to every parish and church to gather the information.  Since it is such a small island and really doesn't have many families, I'm relatively sure anyone who has family born there is a cousin.  First however, I need to find the book. 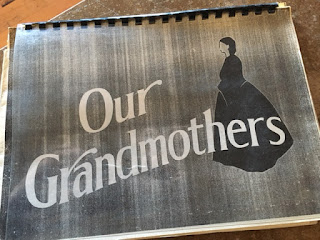 I thought it was buried in a cedar chest way back in the corner.  Unfortunately, the only way to get there was to move every shelf out of the way.  This is actually the END result.  The chest can't even been seen. 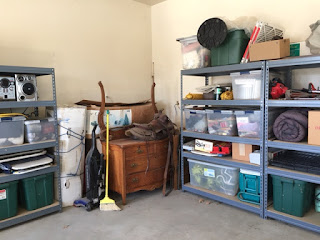 First up, move all of the stuff OUT of the shelving units and on to the floor, then move the unit.  Most of THIS part wasn't heavy.  The problem was getting this dresser off the TOP of the chest, along with that huge piece of marble standing behind it.  Boy that puppy was heavy!! 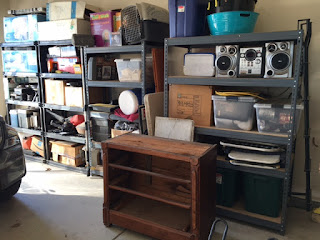 With everything finally out of the way, I was able to access the chest.  It's full of my grandmothers dolls, many pieces of 1800's clothing, including corsets, wool tights and gloves.  I even have a folding umbrella.  There's some great stuff here!!  It should all be in a museum somewhere.  There are also lots of newspapers (my mother was the saver) including Kennedy's assassination, Elvis and Sadaam Husein's death.  Unfortunately, there was no "Grandmothers" book. 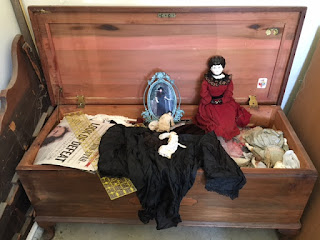 I carefully repacked everything, rearranged it all back in the corner and stared at the boxes for awhile.  I just KNEW it was in there somewhere.  I took the first box down, almost getting a hernia it was so heavy, and lifted out all the books.  There at the bottom was My Grandmothers!!  I shouted with glee!!

Inside the house, I began pouring through the pages.  First big problem!!  This was all printed BY HAND, in rather fancy dancy writing that is terribly hard to read.  It helps that someone went through the book and with a red pen, putting a star by my grandfather's information.  There are birth records, death records and census reports, all culminating in my Uncle's family.  I guess we have always been the black sheep side.  There is one small indication of my father's birth ... and nothing else.

Interestingly enough, my Grandfather Kissack married my Grandmother Kissack.  Her maiden name was Jesse Lily Kissack.  There are MANY more Kissack's than I thought possible, going clear back to the 1700's.  It's going to take some time to wade through this and figure out who's who.  It would be exceedingly clearer if it were all typed.  Maybe that's something I can work on.

In the meantime, all the information that Nick Russell and Mister Ed sent to me, has disappeared from my inbox.  Modern technology sure can be frustrating!!  I'm still assuming we are cousins however ... and I'll prove it when I re-gather the information.

Today is Santa-Get Your Free Toy day at the Elks.  In less than two hours, Santa's elves wrapped over a hundred gifts to be given away this afternoon, along with soda and cookies.  Lactose intolerance nixed the milk.  I'm wearing my big coat.  It was a chilly 60 degrees in my house this morning with a corresponding 29 outside.