Up bright and early ... way too early for an old retired gal ... I headed off to the Elks to help prepare other turkey dinner for Challenged Children.  This time there were about 175 kids and caretaker adults.  Although at one time I fancied myself a caretaker, I quickly discovered I'm NOT.  Hats off to all of those wonderful people who work and teach at the schools for these kids.

Although I thought we were having ham, turkey got back on the menu because it was so darn good!!  About an hour before lunchtime, I realized no one was getting the water boiling for the "instants" or putting casseroles together.  You know me, I took charge!!  We carefully measured out all the water for the instant potatoes and stuffing and got it on the stove.  Trouble was, the guy in charge of the huge gas stove couldn't remember which pot was which, an important thing since each one had a different amount of water.

After I made four trips around the corner to point out each one, one of the guys got smart and whipped out a sharpie, whereupon he marked the pots.  "3-quart potatoes" will forever be tattooed on the side.

In the meantime, I threw together the typical green bean casserole and got it in the oven, along with the rolls.  With a pound of butter melted in each pot, we finally stirred everything together and voila!!  Potatoes and stuffing.  But where's the gravy?

Luckily, I was just in time to grab the foil from under the turkey, dump it into a pot and throw it on the stove with some water.  Best gravy ever, after ten minutes of whisking the mix into the now boiling water.  It's amazing what a little turkey juice can do.  Remember this part if you cook a turkey this way.

Amid screams, running, mumbling and broken plates, and that was just the kitchen crew, we got everyone fed.  There was lots of screaming and running from the kids too, which is why I admire their teachers so much.  That's a job I probably couldn't handle at all.

So here's the turkey recipe ... I haven't tried it personally, but will be doing so this week.  Vern used large turkey breasts only.  These particular ones were Norbest.

Cover a large cookie sheet with foil.  Unwrap the entire piece of meat and pat dry, placing it on the cookie sheet.  Brush with melted butter before sprinkling with Montreal Chicken spice.  I only have Montreal Steak, so that will be on my grocery list.  Place in a 350 degree oven UNCOVERED for 1-1/2 to 2 hours ... until it's nice and brown.  Cover with foil and press it down around the bottom to the cookie sheet.

Back in the oven for another 1-1/2 to 2 hours until a meat thermometer reads 145 degrees.  That's when he takes the pan out and leaves it on the counter to sit (still covered) while it keeps cooking for about 15 minutes.  He said the final temp should read 160, but I know the "recommended" temperature of turkey is around 165-170.  That part is up to you.  When he took the foil off and sliced it up, it was the juiciest most tender I've ever eaten.

All the recipes I've ever tried say to tent the turkey with foil first.  That's the mistake he says, because when you take the foil off to brown and finish cooking the bird, that's when it dries out.  I'm giving it a shot this week.  I'll let you know how it works.  He did say he cooks whole turkeys the same way, but uses smaller ones ... 12 pounds and under.  I probably wouldn't want to try this recipe for the first time at your Thanksgiving dinner ... you know, just in case.

In other good news of the week, you'll be happy to know I found the tip of my spatula.  I bit down on something in the second to last glass of mousse that didn't quite feel right.  Sure enough, here was the piece I had been looking for, rather chewed up.  I'm guessing this particular spatula is about 30 years old.  Maybe it's time for a new one!!  At least the company didn't find it!! 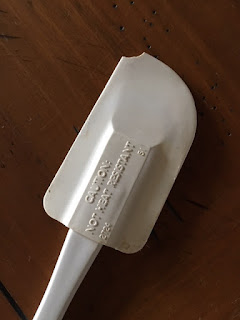 Even though it's still sprinkling, I'm going to try and make it to the big city today for the last of my Christmas shopping.  I've tried this three times now and never made it.  Wish me luck!!