I'm A Quilter And A Zoodler

Being a quilter is kind of a misnomer.  I don't actually QUILT these myself, I take them to a wonderful lady who does that part for me.  I just sew all of the 5,000 pieces together.  I promise I won't make that mistake again.  Good heavens ... this quilt has gone on FOREVER!  Every single one of those white pieces is a separately cut and sewed piece.  Some of the colored ones have two pieces each!

I think I've been sewing on this for a total of two months, my usual time being maybe a week.  And I'm not done yet!!  I still have to spend a few hours moving squares around until I get the color combinations right, before I can finally stitch it all together.  By then, I'll hate it!!

The good news is that when the quilter is done with it, she does such an amazing job of adding dimension and design, that I will love it again.  At least if it ever gets that far!! 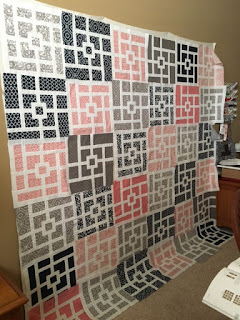 And now, thanks to the magic of Amazon.com, I've become a Zoodler.  I know this sounds crazy, but I've switched out a lot of the pasta I eat for zucchini noodles.  It's weird that this works and even more weird that I actually like them.  So far I've mixed them up (both raw and cooked) with parmesan cheese, with marinara sauce and with salad dressing.  They twirl on your fork just like pasta and trick your brain into thinking you're eating something delicious!!  It's really all in the sauce.

The magic machine even cores the squash, which is the weird thing sitting on the counter in front.  I've tried to cut out most of the carbs I eat ... which has been a lot ... and not only do I feel better, I'm full longer and I think I may have lost a couple of pounds.  Here's to zoodling, not to be confused with canoodling.  Unfortunately, I haven't figured out how to make mac 'n cheese with them yet. 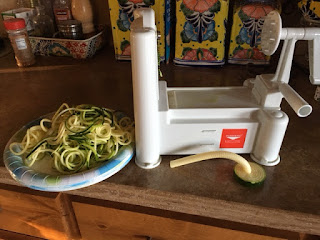 I'm sure you're aware it's the time of year for returns.  Just for kicks, I googled those boots I've had for almost three years and what to my wondering eyes should appear?  They are still making them.  I ordered a pair post haste.  Now I have to go through all the trouble of returning them.  Yes, I should have known better.  They have the same problem, too tight in the arch.  At least I could get my foot in this pair, but then they were WAY too big!!  That's what I get for ordering boots on the internet. 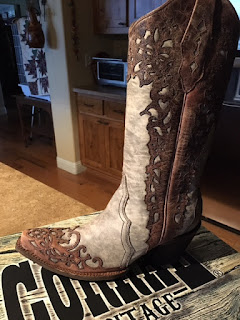 THEN I found these beauties.  As I'm sure you already suspected, I'm not only addicted to quilting material, but cowboy boots.  These have to be very close to being my all time favorite fancy boots.  It just goes to show that sometimes, once in a blue moon, you CAN get boots on the internet ... and they fit!!  And they are taller.  And they are sparkly, which I swore I would never wear in a million years.  And they are MINE!!  My name is Nancy .... yada yada yada  ..... and I'm wearing them as I type. 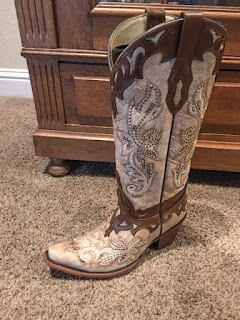 To finish out the day, I made ... you guessed it ... peanut butter cookies.  I'm curious ... does anyone know why we mark the top with a fork?  These pretty much offset the zoodles, but it's better than having BOTH carbs. 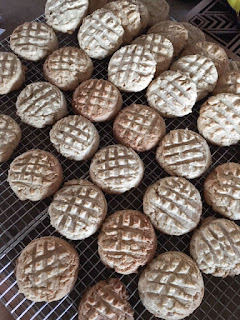 I'm contemplating where I can go today with my new fancy pants boots.  It's been VERY cold ... down to 32 degrees the last couple of nights, but I'll be toasty warm with my new boots on.  Hmmmm  maybe I should have bought a coat instead.