But NOT this quilt!!  I enjoy making easier quilts with big squares.  Give me something like this with 5,000 pieces, each of which has at least four seams, and I'm overwhelmed and bored in a flash.  This wasn't finished overnight ... it has taken me almost a year.  No, I'm not necessarily thrilled with the square placement, but it just wouldn't stay on my quilting wall long enough to design the perfect pattern.  Every morning I walked in my sewing room to find it in a big pile on the floor.  So I just stitched it up.  DONE!!

Wasn't I shocked when I put it on the bed for a picture and discovered it was a King size instead of a queen as marked on the package.  That certainly made a BIG difference!!  It will also have a BIG price when it comes to the 8 yards of backing material and the final quilting cost.  YIKES!! 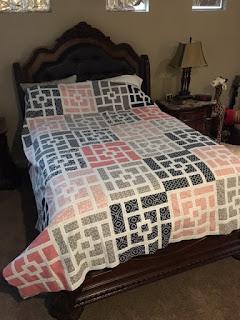 While hunting in my cabinet for my next conquest, I quickly found out the glass door wouldn't shut.  What the heck?  Remember these on your grandmothers china cabinet?  Apparently when they get old enough, the rollers disintegrate.  Least I think that's the problem.  After trying to slam the door and almost breaking the glass, I found half of three rollers on the floor.  They shouldn't be hard to replace, super simple, if I can find eight of them. 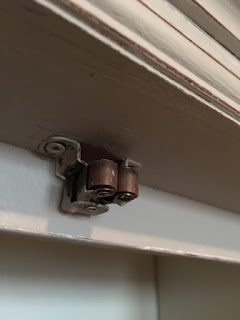 In the meantime, someone rang the doorbell ... a rarity at my house.  Outside there was a box that smelled wonderful ... like a pine tree.  Sure enough, when I opened it up, here was a beautiful centerpiece for my table, complete with a candle.  My outlaw sister (ex sister-in-law) sent me a piece of Idaho for Christmas.  Just add water.

That part wasn't quite as simple as it sounds.  Nowhere could I get a finger in to see where the actual dish was or how much water it required.  I finally just stuck it under the faucet until water flowed everywhere.  Apparently I have to do that every day ... a nice reminder of the freezing cold snow I'm missing in Idaho. 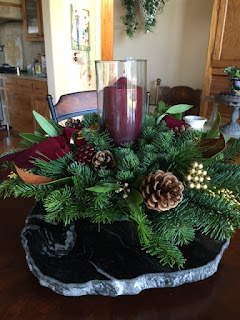 You're going to hate me for this one ... but it's Super Simple!!  A perfect idea for quick neighborly gifts and more importantly, sugar your grandkids can take home to their house.  It's just cereal ... good for them, right? 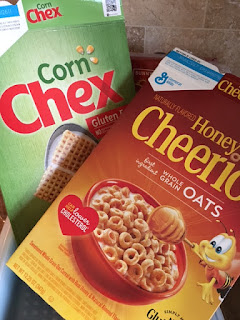 I added marshmallows because I had a bag that needed to go away.

Dump everything into a LARGE bowl.  Put the chocolate chips in a microwave safe bowl with the oil.  Heat for 30 seconds and stir, heat and stir, until completely melted.  Now the easy part ... just pour it over the cereal and stir like crazy.  It might help to do this in the sink.  Cereal kind of went everywhere, which the puppies thought was awesome!!  Dump it onto a sheet pan (I covered mine in foil so I wouldn't have to wash it) and let it cool.  DONE!!  And boy ... is it ever GOOD!!!  Might I say addictive?  This is actually half a recipe ... you can double it if you want. 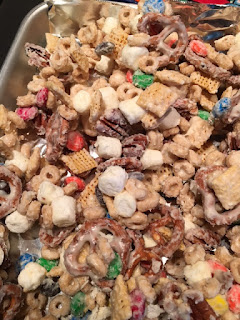 I was so sick of sweet stuff ... I really couldn't keep my hands off the crunch mix ... I brought out my best cast iron skillet to cook some pork loin.  I was on such a roll from the kids Christmas dinner, I was feeling really good about cooking some MEAT!!

Here's the weird thing.  I found some of that Montreal Seasoning for chicken and decided to try it on the pork.  Once nice and brown on the stovetop, I stuck it in the oven at 350 for about 20 minutes.  Another super simple idea.  I must say this is the best tasting pork I've had in awhile.  That seasoning is the bomb!!! 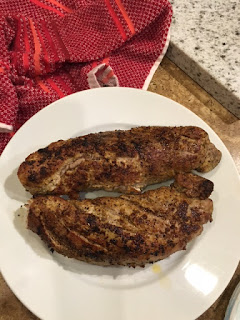 Fat and sassy sitting on the couch, I received a text from Nick Russell that we were kissing cousins.  NO WAY!!!  Apparently HIS cousins have discovered their family came from the Isle of Man.  Well isn't that just interesting as all get out!!  It's a very small island that most people have never heard of, so chances are pretty good that he's correct.

I have a book called "Our Grandmothers", researched and put together by my paternal side of the family, going back to the 1700's.  Who knows where it might be, but I'm going to be on the hunt for the next couple of days.  Having "family" in Florida is a perfect excuse to go visit and not feel bad about taking up their time, because, you know, they're FAMILY!!