I admit it ... I was a big bump on my couch all day yesterday.  I'm truly not all that thrilled with this cold weather.  It seems to freeze my butt to the space in front of the fireplace.  It's another lovely 30 degrees here in Central California and my heating system is working hard to keep the house at 64 degrees.  In fact, it kept me awake all night long as the Midnight Express ran right through my bedroom time after time.

I have to say the weather does make for some lovely sunrise pictures but I'd much rather this was overlooking a nice warm ocean somewhere. 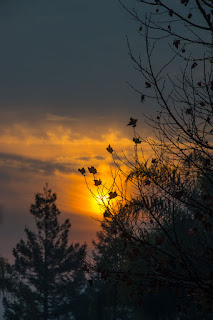 I finally spent a little time on My Grandmothers book.  It's so hard to decipher, I almost gave up.  I really can't tell the difference between the numbers 4 and 7 and names like Maugold and Ballaugh throw me for a loop.  Who knows if I have interpreted the writing correctly.  Suddenly however, I found something very interesting.

It all starts with Isabella Steffen, born in 1757, marrying John Callister in 1780.  They had ten children.  YIKES!!  Everyone seems to have named at least two of their children after themselves and several after other family members.  That makes it extremely difficult to determine who is who.

Isabella Steffen's sister Jane, married Thomas Corlette, a wine merchant from Sicily.  It appears Thomas did a little midnight business of his own, smuggling wine in and out of the Isle of Man.  Unfortunately, he got caught.

Not being able to pay the bail/fine, his brother John put up the money ... 1200 something.  Pounds was the currency, but that seems like a HUGE amount for just smuggling wine.   Not long after he was released from jail, Thomas died, leaving John holding the bag.  Not able to pay HIS debts, poor penniless John was sent to debtors prison where he died of cholera.

Believe it or not, this book has every single one of Isabella's ten children listed, with all THEIR children and so on, down to the 1980's.  Here's where it gets interesting and my detective brain kicked in.  One of John and Isabella's daughters, also named Isabella, married Daniel Rogers.  They had five children.  At that point, poor Daniel drops off the face of the earth.  He completely disappears from all records.

Isabella with her five children, then went on to hang out with John Corlette (great nephew by marriage of the wine smuggler's brother) and with no mention of marriage, had one child, Jane born in 1826.  Makes you wonder, right?  Do you think Daniel left her because she was having an affair??  Or maybe poor Daniel is buried in the back pasture.  I think a little sleuthing is in order.

It's pretty amazing to read the stories in this book.  Isabella and John Corlette's daughter Jane married well you might say ... to Henry Crellin, a landowner.  If you owned property back in the day, you were RICH!!  I suppose that's why they had 11 children.  This is where the family spread out ... at the great-great grandparent line.

Tired as I am this morning, I have to actually go to work and get some year-end bookkeeping done for my only remaining client.

Just a reminder for those last minute shoppers ... you only have FIVE days left!!!