You Thought I Was Kidding ....

Santa Claus really did come to town yesterday.  Here's proof positive!!  I wasn't too happy about that midnight call for a sleigh ride, but I could hardly say no.  Out of all the people in the world, Santa called ME for a ride in my Chevy truck.  He could easily have picked a Ford!!

Sleigh bells weren't jingling when I picked him up, but he did have a bell he was ringing and a big HO HO HO.  It was hard for me to be cheery that early in the morning, even for Santa. 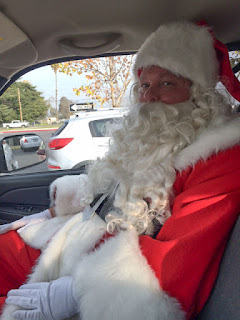 Little did I know I would soon become the Elf Helper to about twenty little reindeer.  Good thing I wore my Reindeer Boots.  They weren't impressed at all.  I rang the bell and said I was looking for spare reindeer for the sleigh and they all came running.  With their handprint horns and sparkly red stick-on noses, they were harder to maneuver than a gaggle of geese. 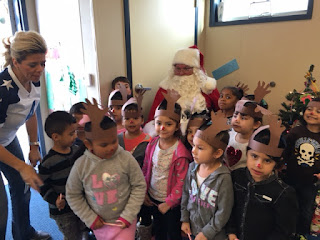 One by one, they got to speak to Santa while I corralled the rest.  The teacher with a heart of gold and more patience than I've seen in a lifetime, took everyone's picture.  It's funny who gravitates towards you.  One little boy's father played Santa two weeks ago ... a rather non-jovial representation ... and he told me all about it twenty times before it was his turn.

I felt bad because he had apparently destroyed one of his horns with a pair of scissors.  He held on to the remaining one like it was gold.  Once he got the candy cane Santa was handing out, he came back to tell me about his dad three more times.  I played along ... Santa needs all the helpers he can get, even if they are Firemen in real life ... and reindeer horns fall off sometimes, but they grow back.  No worries!!

I slipped out of character when one little girl told me all she wanted for Christmas was a Hatchimal.  They run about $60 ... a pretty tall order for this less than prosperous town, not to mention you can't find them anywhere.  Some crazy writer lady who was losing money bought up hundreds of them, pretty much cornering the market, so she could sell them for exorbitant prices ... upwards of $200.00 each.

People found out, as people will, and she has been the scourge of Christmas ... trying to make money off little children's Christmas wishes.  No one is buying ... I hope she gets stuck with every one!! 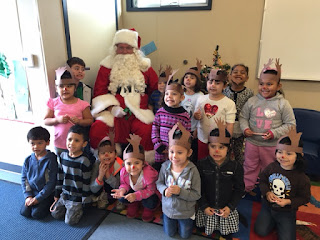 It's a very busy time of the year for Santa.  He had to get back to his toy shop, so the kids got one last hug as they promised to keep their eyes closed on Christmas Eve.  As we walked out through the yard, we got lots of waves and yells from everyone, including the adults.  What a fun way to spend the morning!!

I dropped Santa off, in spite of his invite to have a hot toddy ... it's 75 degrees out Santa!!  After picking up my new glasses (no new prescription for the first time EVER), I headed back home to this box staring at me from the counter.  Krispie treats ... Krispie treats.  After no luck finding a Hatchimal anywhere on-line, I broke down and made my childhood favorite. 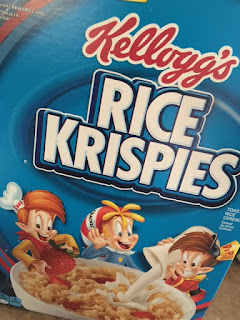 Rice Krispie treats are the bomb!!  Easy to throw together and HEALTHY, right?? 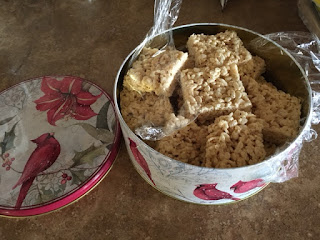 To offset the treats, I cooked a big turkey breast according to the new recipe.  It was good and it was bad.  I'll tell you about it tomorrow.  Today I'm headed off for a Christmas lunch in Fresno on what will soon become the rainiest day of the year, complete with flooding predictions.  Good timing Nancy, good timing!!

If you happen to see a Hatchimal, please purchase it for me.  I will make it worth your while.   It would be nice to make this little girl's Christmas wish come true.