My Name Was Trouble

Even from the time I was a tiny little munchkin, my first thought always went to eating!!  That's my shoe I'm having a taste of in the picture below, while parked on a blanket in the front yard.  You would think they wouldn't let me eat the soles, right?  As you can see, we did NOT have a picket fence ... we only had a picket GATE.  It and the fence were built high enough to keep most of the chickens (and me) in and the chicken-eating critters OUT.

When you pulled in our driveway, you drove across a dry creek bridge, then into our yard across from the gate where most of the farm equipment was kept ... a parking lot of sorts.  That's where I got into trouble.

Farm help was few and far between, but there were a couple of really nice old Indians who worked between the two ranches.  Since I have no recall of our number one employee's name, we'll call him Joe.  Joe had a penchant for the devil alcohol.  Sometimes we wouldn't see him for days.

On one such occasion, my dad finally got worried and set out to find him.  He didn't have to go far.  There at the bottom of the dry creek sat Joe's car.  Joe had apparently missed the bridge.  Dad got the biggest truck we had and pulled the car out, leaving it in our parking lot of sorts.  Joe was nowhere to be found.  Three days later, my Dad located him.  Apparently he had walked all the way back to his cabin to sleep off his affliction and the concussion when his head hit the steering wheel.  My name quickly became Trouble.

Being the inquisitive person I was at three years old, I wandered out to the car, opened the door and screamed bloody murder when I saw blood on the front seat.  For that, I got the biggest spanking ever!!  NEVER leave the yard, NEVER open a car door and NEVER scream like you just got bit by a snake!!  My parents put a lock on the gate. 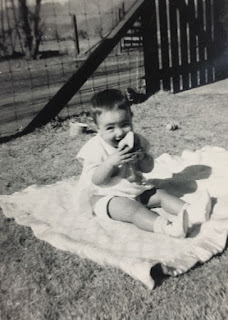 That wasn't the first and certainly not the last swat on the butt!!  See the mountains in the back of the picture below?  They meander along right behind our little house, making for a great place to explore.  Cousin Billy ... six years older than me ... and friends Jimmy and George Nagle along with my brother, were always exploring the mountainside along the trails left by the cattle.

One day my mother made the boys take me with them when they went out to play, which didn't make them very happy at all.  As we went on the great expedition to the top of the mountain, I was paying close attention to the trail so I wouldn't fall down.  Almost immediately, the boys did what boys will do ... they ran off and left me.

Every square inch of mountain and land was used for grazing cattle, including the entire area behind the house.  Imagine my horror when I discovered the boys had disappeared!  I turned around to head back to the house and came face to face with a HUGE bull.  I immediately took refuge under a bush and was quiet as a mouse as I watched the bull nibble at the grass.  In a short while, he laid down and went to sleep.  OH NO!!!!  I'll NEVER get home again!!

Several hours later someone finally discovered I was missing.  They called out my name and woke me up ... like the bull, I had taken a quick nap!!  I suppose they were glad to see I was alive, but what the heck!!!  I was the one who got a BIG swat on the butt!!  What about the BOYS??  They're the ones who left me high and dry on the mountain!!  I tried to explain about the scary bull, to no avail.  It didn't pay to be a girl back in the day. 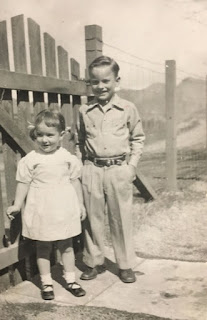 There were lots of adventures on the ranch, most of which resulted in a spanking for me.  My name was Trouble from day one and continued on for several years until I finally figured out how to get myself out of scrapes before I got caught.  It's amazing I survived!!

It's finally winter in California.  There's frost on the pumpkin this morning and it's a chilly 34 degrees.    Time to spread some Christmas cheer!!